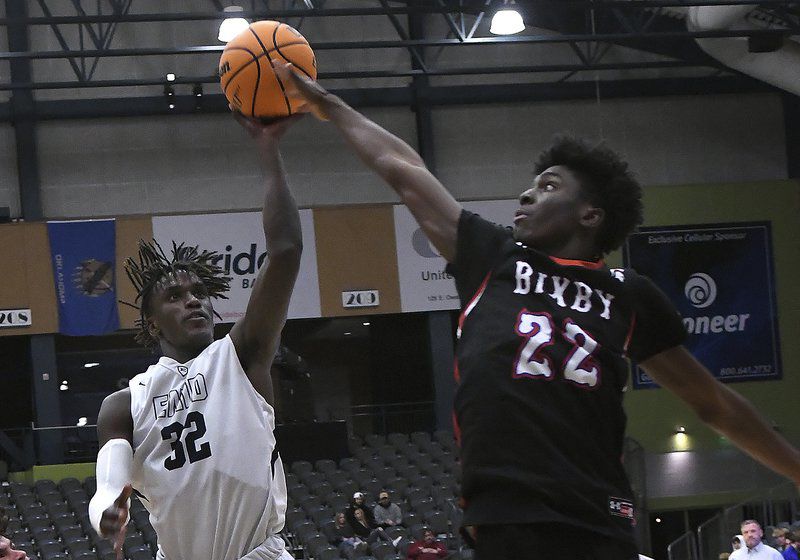 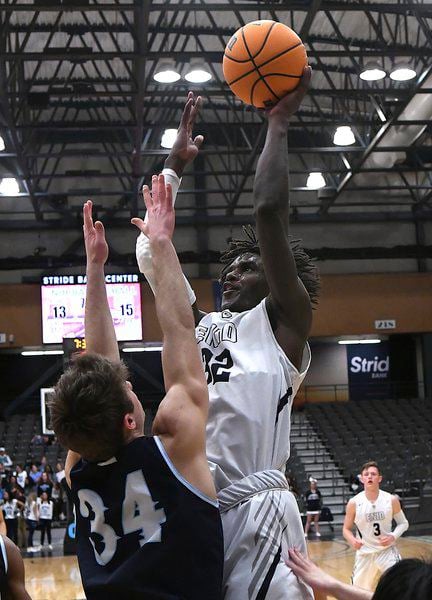 ENID, Okla. — Mason Berry has always been a gamer, but his game of choice wasn’t basketball.

It was "Call of Duty: Black Ops II" for the Sony Playstation 3, a staple in Berry’s life as he grew from a middle schooler to the physically dominant senior forward he is now with the Enid Plainsmen basketball program.

Berry’s interest in video games hit a new level when his Playstation 3 console broke. Without hesitation — or a YouTube instructional video — Berry dove into the machine gripped with curiosity and a screwdriver.

“It was already broken anyway,” he said.

But Berry, then still in middle school, managed to fix the machine.

“Then I was like, ‘Maybe this is actually my niche,’” he said.

Over the next few years, Berry found another niche — basketball.

With Berry’s help, the Plainsmen have eight wins this season, nearly as many wins as the program’s had the last two years.

Assistant coach Marques Odom said Berry became an “overachiever,” as he started lifting weights in the gym and running more.

“He busts his butt,” Odom said. “He’s a hard worker who does the little things.”

Berry got into basketball at the encouragement of his older brothers. Berry has six brothers and one sister. His brothers Bryan and Marquise both played basketball, while Berry’s other brother Darnay played college basketball.

“I wanted to be just like them,” Berry said. “They pushed me. They said I could be better than all of them if I worked hard. So, I believed that if I just got in the gym then I could be better.”

Prior varsity players like Tyler Johnson also gave Berry hope of what was possible. Berry remembered seeing Johnson put on a performance in the gym when he was still in middle school. Johnson sank deep shot after deep shot.

His goal was by the time he made it to his junior or senior year, he could bring something useful to the table. His freshman year, Berry found his niche in basketball: rebounding. The freshman came off the bench one night and reeled in rebound after rebound.

But in his sophomore year, Berry said he lacked motivation to the point where he began entertaining the idea of skipping certain practices.

During that period, Enid’s boys’ program saw two head coaches in two years. Berry said he didn’t feel a connection with the head coaches at the time. But then Curtis Foster came.

Foster, the third head coach in as many years, was hired in April 2018 and immediately struck a chord with players, including Berry.

“I feel like he actually cared about what I do outside of basketball,” Berry said.

It was the little things that sold Berry on Foster, like how he told the team early on that if they left the team, there would be no hard feelings. Foster would still “look them in the eye and shake their hands” if he saw them in the halls.

“It made me really like him,” Berry said. “So I just wanted to be closer to him and listen to what he had to whatever had to say.”

Foster said things clicked for Berry in their first year together

“He’s really worked hard to put himself in a position to get recognized on the floor because he’s put in some extra work,” he said.

Foster said he doesn’t have a player “who works even close to how hard that young man works on the floor.”

“He’s really made a name for himself with other coaches to where he could possibly get a chance to get himself out of here, go to college and play,” Foster said.

While physically imposing, Berry’s game has moved beyond securing rebounds. He’s helping run offenses on one end of the floor while running defenses on the other. He’s a motivator and an example for those around him.

Playing under Foster hasn’t made Berry’s game better. It’s given Berry the motivation and the drive to be better. To push harder.

“(Foster) is always telling me to give myself a chance to get out of here,” Berry said.

Berry is currently a 3.0 (grade point average) student. At this point in the season, his college plans — and his recruitment — are uncertain.

“That’s the only thing I’m really nervous about is what I’m going to do after (high school),” he said.

As Foster described it, the road ahead of Berry is “not paved in gold.”

“He’s got a tough way to go before he gets out of this school,” Foster said. “But what he’s fighting for, the tough road that he’s on now, it can pay dividends for him further on in life.”