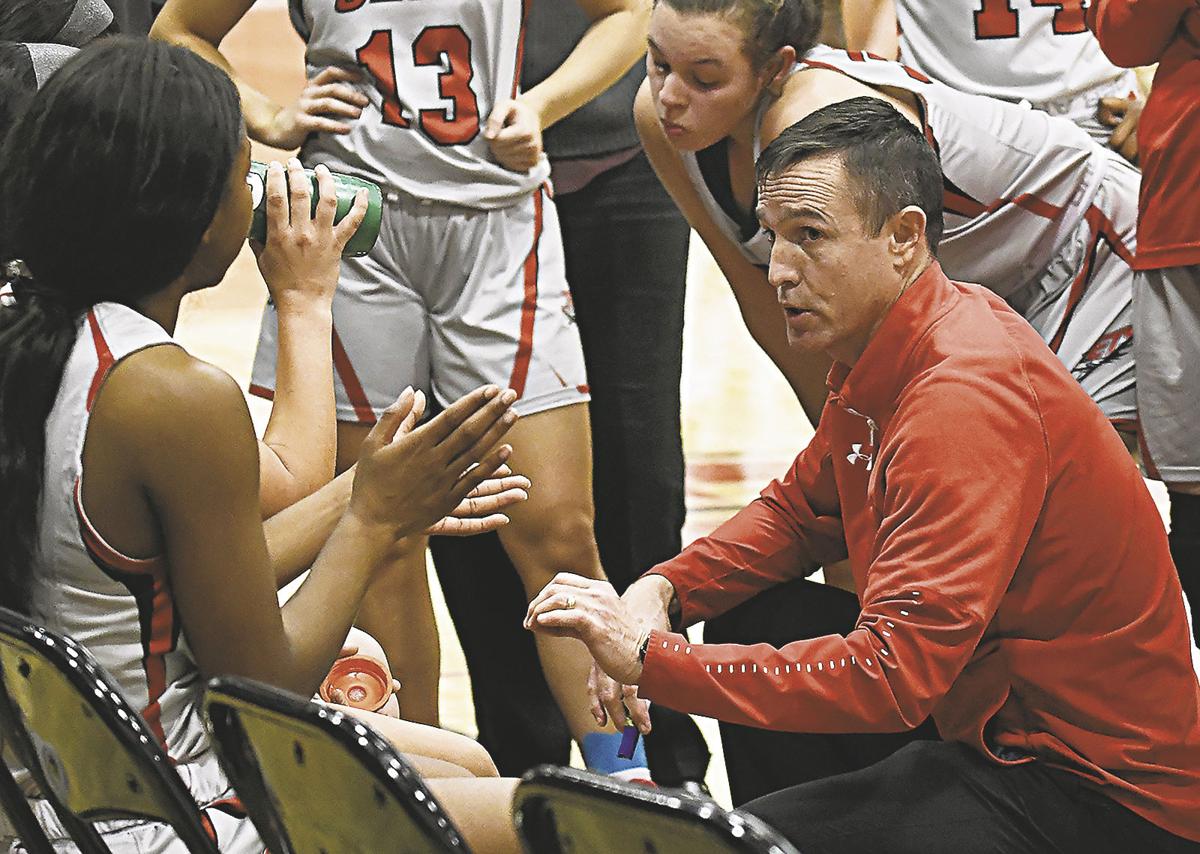 NOC Enid women's head coach Scott Morris talks to his team during a time out Dec. 5, 2019, at the Mabee Center. 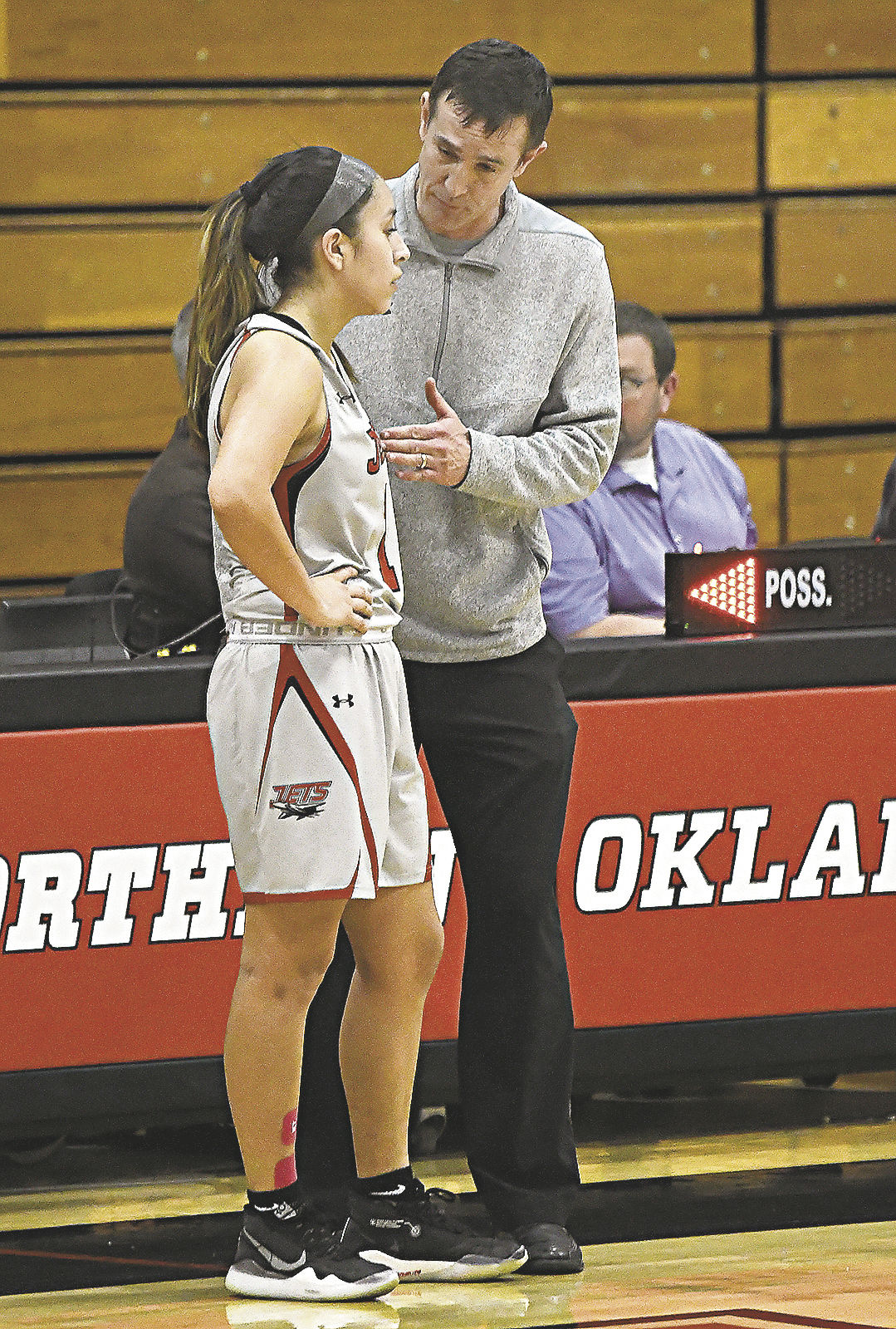 NOC Enid women's head coach Scott Morris talks to his team during a time out Dec. 5, 2019, at the Mabee Center.

ENID, Okla. — When Scott Morris arrived in Enid to become the Lady Jets' first-ever head basketball coach at Northern Oklahoma College Enid he told his wife it was only going to be a temporary stop. Then they fell in love with Enid. But now, after 19 highly successful years, Morris is moving on.

"Enid has been very, very special to us," he said on Tuesday. "Enid has been a great, great opportunity for us, we've established some deep roots."

According to a press release from Northern Oklahoma College, Morris is expected to become the next head boys varsity basketball coach at Stillwater High School. However, his hiring won't be official until it is formally approved by the Stillwater school board.

It's going to be a big change for the 49-year-old Morris, whose formative years have centered around Northern Oklahoma College basketball from the time he was growing up in Tonkawa to his early coaching days.

"My dad went to Vietnam right out of high school, started a family and came back and played at (NOC) Tonkawa," Morris said. He remembers going into the locker rooms and how much he looked up to the coaches and even dreamed of playing there one day. He even helped keep stats for the team as a 2nd-grader. "Although I am not sure how accurate those stats were in those years," Morris laughed.

Morris then did have the opportunity to play for the Mavericks, later becoming an assistant coach for the men's team and then assisted for the women's team after earning his master's degree at Central Oklahoma. A year later became the Lady Jets head coach.

His coaching resume also includes being the head coach at Drumright High School and Woodland High School and two years as a graduate assistant at Oklahoma Christian University.

Under Morris, the Lady Jets met with nearly immediate success, putting together a winning season in only the program's second year of existence. It was the start of 18-straight winning seasons and when the team had a 22-win season the next year, it was the first of 17 consecutive seasons of 21 wins or more for the program. Twice, his teams won 30 or more games in a season.

"Coach Morris has done a tremendous job at Northern Oklahoma College," said NOC athletic director Jeremy Hise in the school's press release on Tuesday. "He has built a program from the ground up. His program represents everything we value at Northern."

Morris compiled a record of 460-154 at NOC Enid for a .752 winning percentage. His teams made five appearances in the National Junior College Athletic Association Division 1 women's basketball national tournament, including making the Final Four in 2011, with its most recent appearance in 2019. The Lady Jets were nine-time Oklahoma Collegiate Athletic Conference champions and were nationally ranked in 13 consecutive seasons, including being ranked No. 5 following the 2010-2011 season.

The Lady Jets were 21-9 last season and were one win away from making their sixth trip to the national tournament but came up short against Murray State in the Region 2 title game. It was a season that saw NOC Enid overcome season-ending injuries to two key starters but able to keep their string of winning seasons intact.

His teams produced 13 NJCAA All-Americans and 71 Academic All-Americans. Every two-year Lady Jets player left NOC Enid with either a conference championship, a national tournament appearance or a national academic title.

Morris said he was not pursuing leaving NOC Enid, but eventually was persuaded by Stillwater High School athletic director / football coach Tucker Barnard that the Pioneers coaching job was an opportunity he didn't want to pass up.

"I really didn't go looking for other opportunities," Morris said. "I had other coaches calling me, asking me for potential candidates for their openings, which is pretty common in this profession. Tucker Barnard said why don't you consider Stillwater. At first I told him no and he called back and really wanted me to consider it. I still wasn't very serious about it, but he just did a good job of laying it out to make it more feasible."

The prospect of being able to coach his son Brennan also was a significant factor for Morris. Brennan will be a high school sophomore next year after completing his freshman year at Chisholm High School.

"I missed the opportunity to coach my older son, Bryce, and I thought it would be pretty special to be able to coach Brennan through three years of high school," Morris said. He and his wife of 20 years, Summer, also have a 10-year-old daughter, Avery.

But the opportunity also presented a chance to get back into coaching boys.

"After raising my boys, I had the mindset of mentoring young men and was intrigued by that opportunity," he said.

Stillwater also was enticing as Bryce will be entering Oklahoma State University next year. Morris thinks Bryce may have coaching in his future at some point as well.

While looking forward to his new opportunity, Morris said it still was a difficult choice to make.

"It was not an easy decision to branch out and pursue other opportunities with that level of loyalty and commitment (to NOC) that I have in my past," he said.

Hise said Tuesday there already has been interest in the opening at NOC Enid created by Scott's departure.

"We posted the job (Monday) afternoon and we plan to conduct a national search," Hise said. "We have already had a lot of interest expressed. That's the great thing about having Scott here is that he's leaving us in a great spot, though we hate losing him."

The services honoring Isabel Tullis, infant, will be held 1:00 p.m. Monday, January 25, 2021, in the Brown-Cummings Funeral Home Chapel. Condolences may be shared with the family online at www.Brown-Cummings.com.

The Memorial Services honoring Clayborn Hedges will be 11:00 a.m. Friday, January 29, 2021, with Military Honors conducted by the United States Army. Services under the direction of Brown-Cummings Funeral Home. Condolences may be shared online at www.Brown-Cummings.com