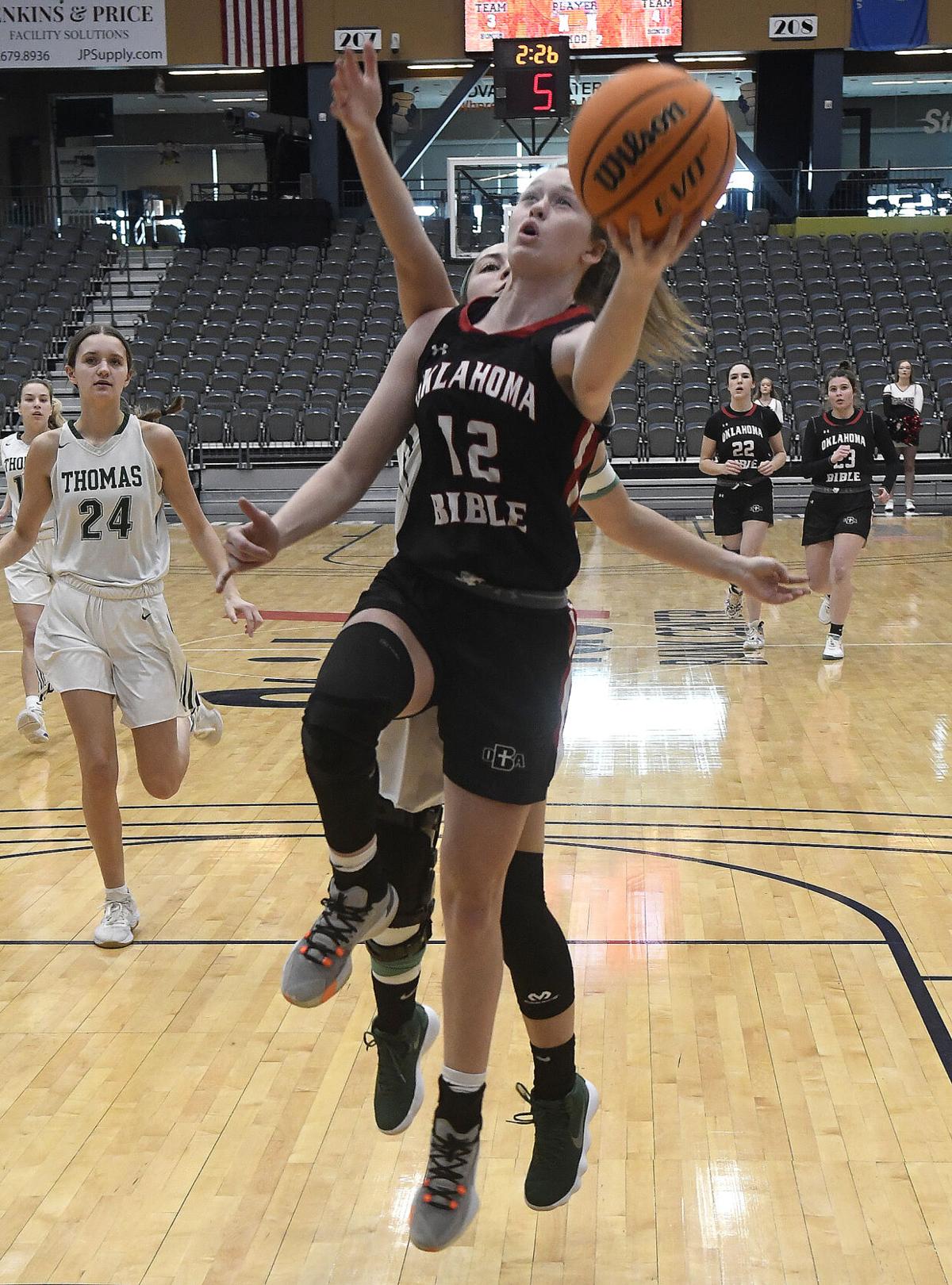 OBA’s Clara Caldwell goes up for a basket against Thomas-Fay-Custer during the first round of the Three Rivers Conference Tournament Thursday, January 6, 2022 at the Stride Bank Center. (Billy Hefton / Enid News & Eagle) 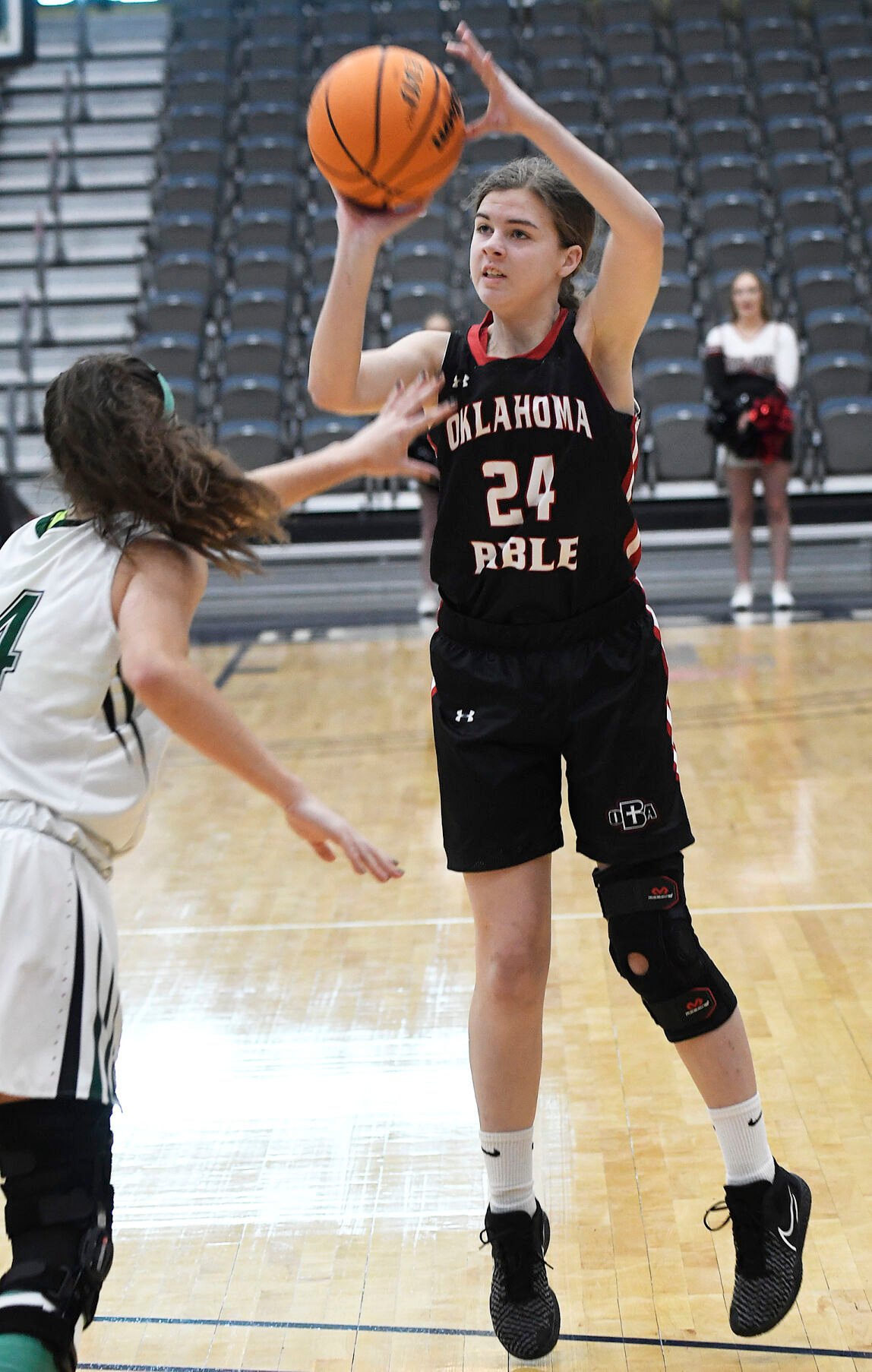 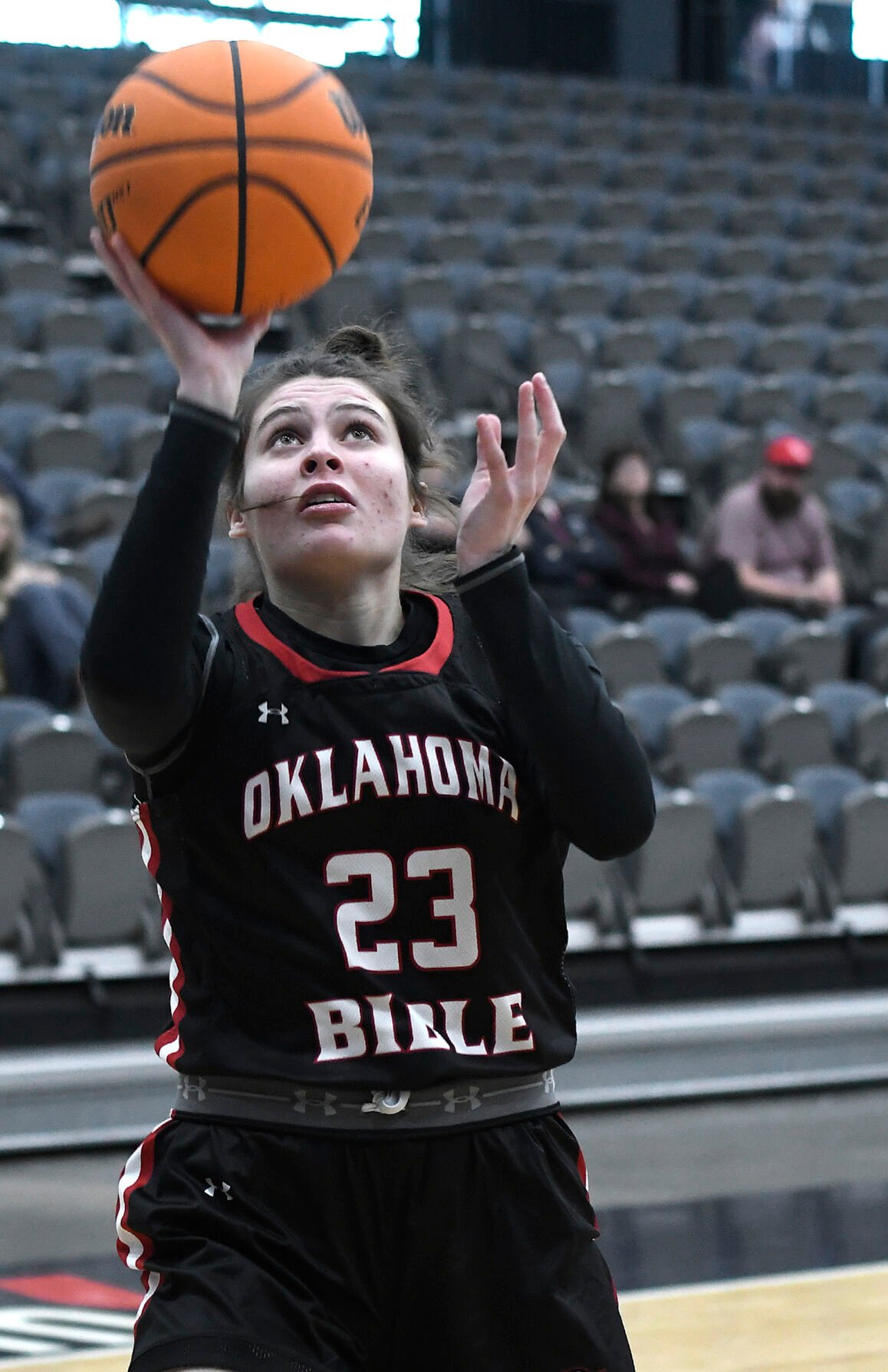 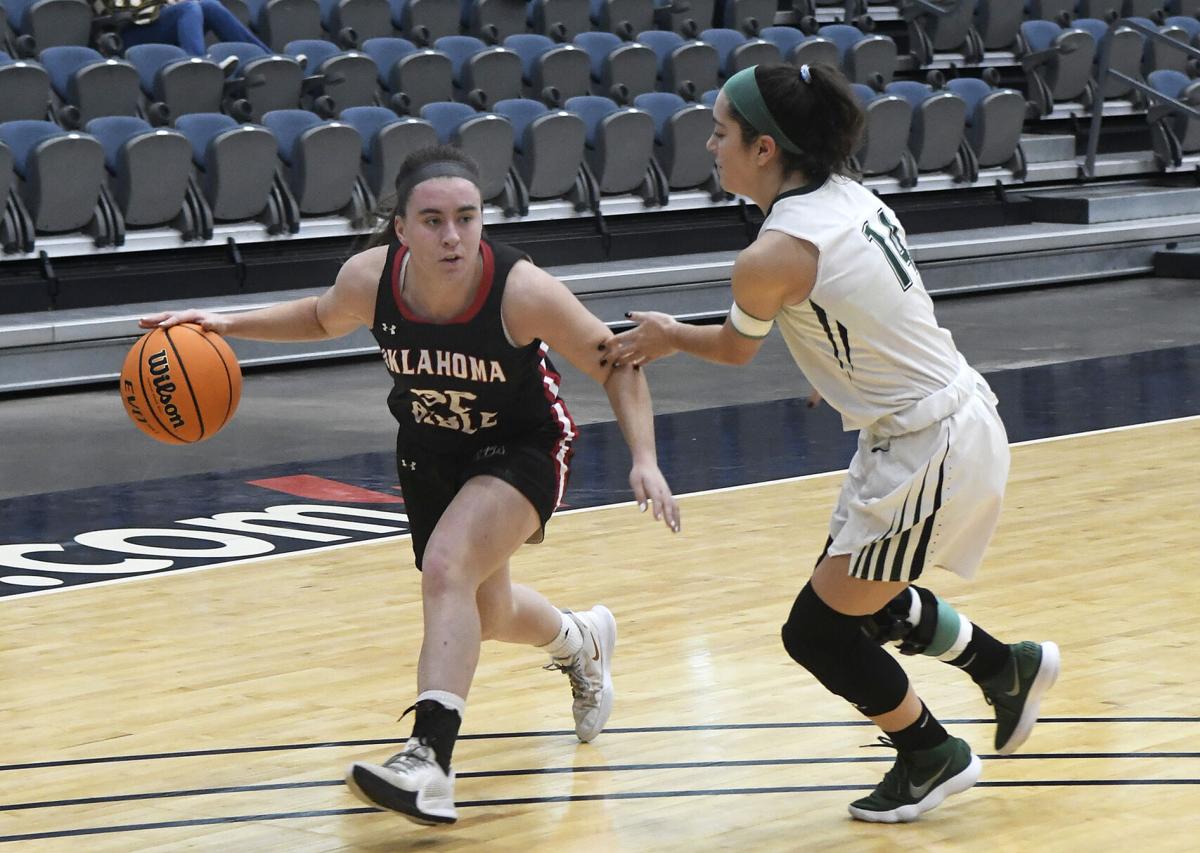 OBA's Cooper Cayot looks for an opening against Thomas-Fay-Custer's Olivia Hampton during the first round of the Three Rivers Conference Tournament Thursday, January 6, 2022 at the Stride Bank Center. (Billy Hefton / Enid News & Eagle) 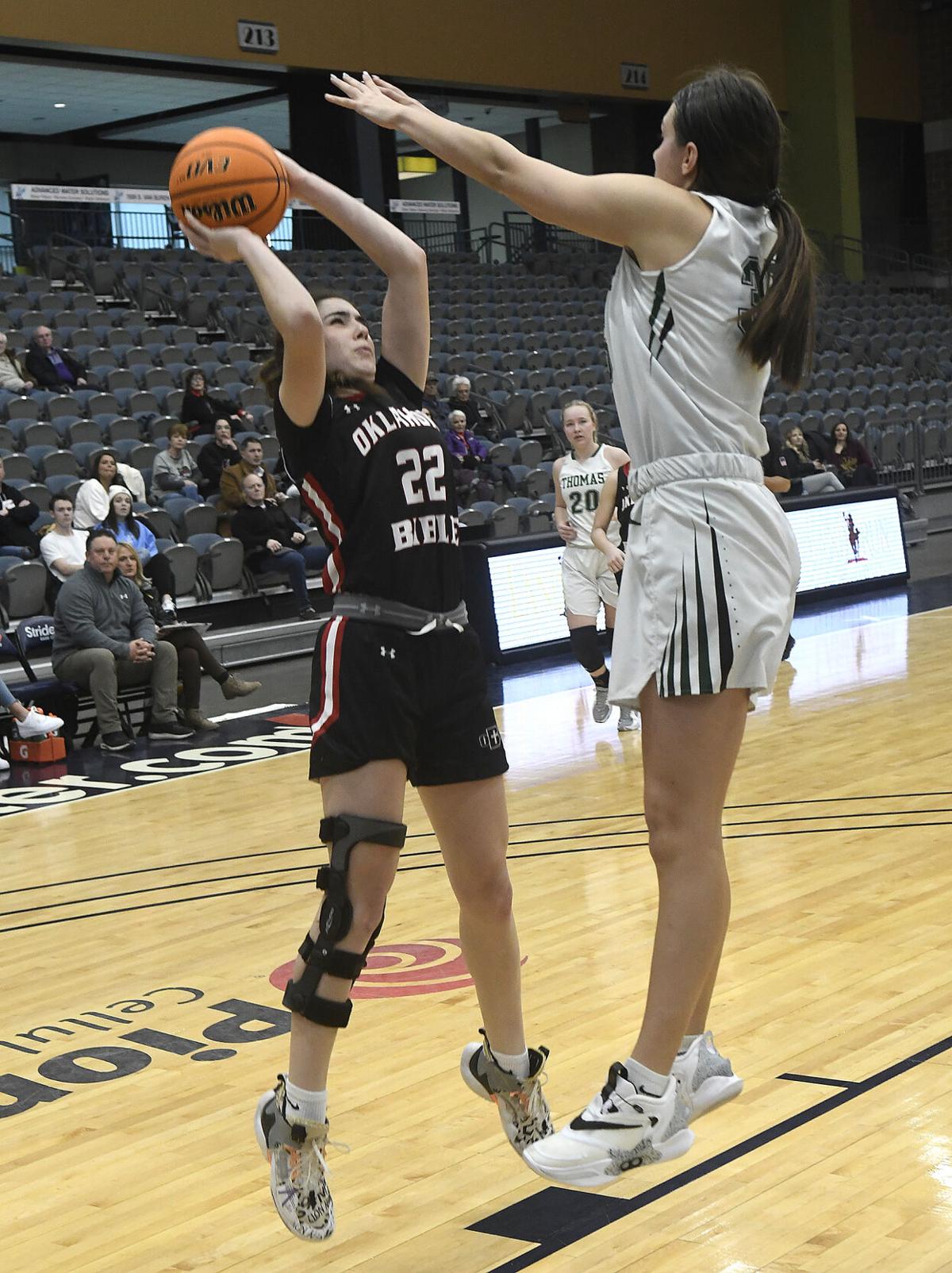 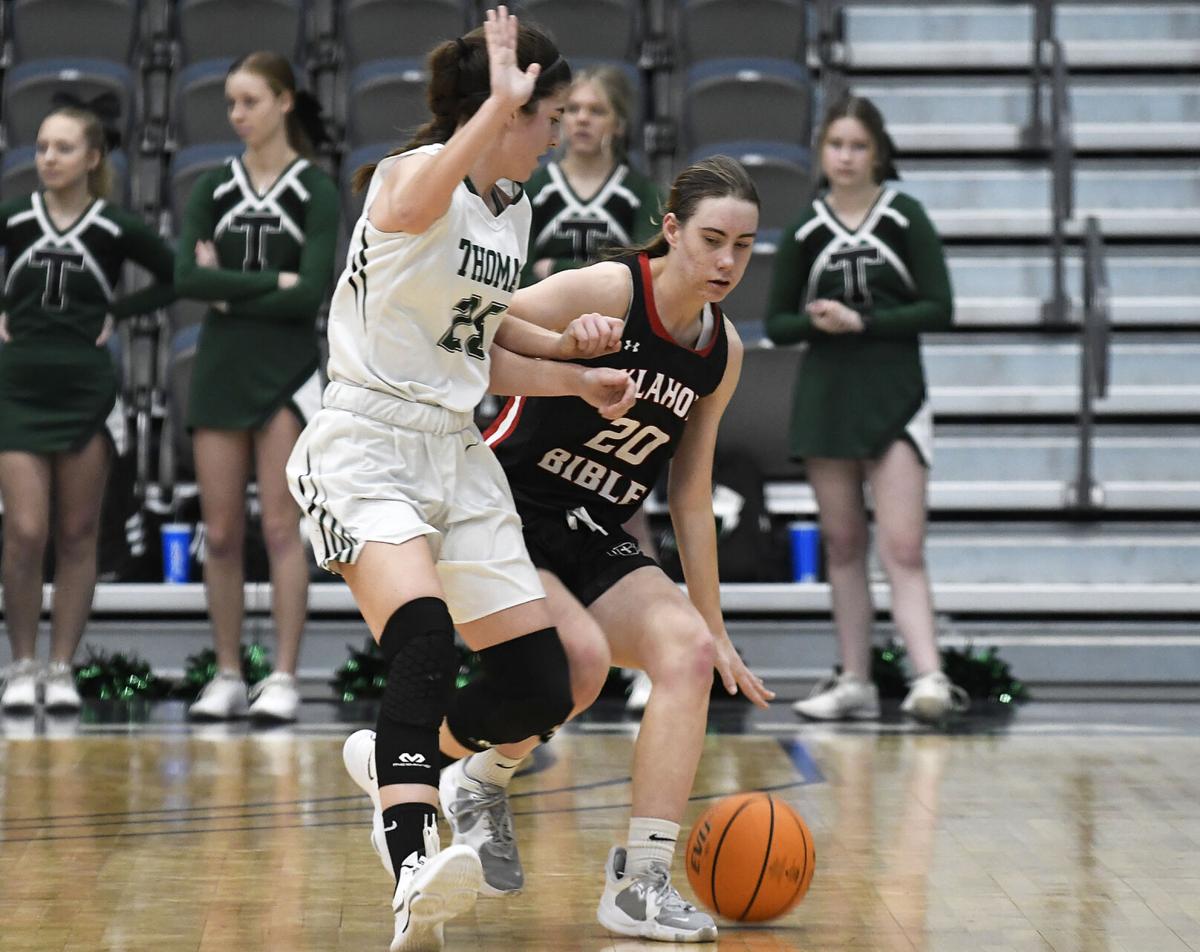 OBA’s Clara Caldwell goes up for a basket against Thomas-Fay-Custer during the first round of the Three Rivers Conference Tournament Thursday, January 6, 2022 at the Stride Bank Center. (Billy Hefton / Enid News & Eagle)

OBA's Cooper Cayot looks for an opening against Thomas-Fay-Custer's Olivia Hampton during the first round of the Three Rivers Conference Tournament Thursday, January 6, 2022 at the Stride Bank Center. (Billy Hefton / Enid News & Eagle)

ENID, Okla. — After playing a tight game for three quarters, the Oklahoma Bible Academy Lady Trojans came up big defensively in the fourth quarter to secure its second win of the season over Thomas-Fay-Custer in the first round of the Three Rivers Conference Tournament on Thursday at the Stride Bank Center.

OBA trailed 10-8 through the first quarter in a rematch of the Dec. 17 meeting between the two teams that went into overtime before the Lady Trojans pulled out a 34-32 win. Leading 27-24 in the closing moments of the third quarter, it appeared the two teams were on a trajectory for another great finish.

As the time ticked away in the quarter, Walden stepped into a 3-pointer with a defender in her face and banked it in to give the Lady Trojans a six-point lead going into the fourth.

“We’ve really emphasized — especially since our game Tuesday — how good teams finish,” Lady Trojans head coach Randy Roth said. “We want to be the team that’s the aggressor in those moments instead of the team that’s passive, and I thought they really took that and applied that today. They did a good job of stepping on the gas in a key moment and finishing well.”

The Lady Trojans held the Lady Terriers to just one point in the fourth quarter, and closed the game on a 18-1 run over the final 10:14 of game time. Walden led the team in scoring with 14 points including four 3-pointers. The freshman guard went three-for-five from deep in the first half for 11 points to help keep the Lady Trojans in the game when their offense was struggling.

“Lilyan really got us going and that’s kind of her role,” Roth said. “Knocking down some threes really extends the defense and opens up some space for us to get into the lane.”

With space open in the lane, the Lady Trojans’ other scorers were able to get more involved in the second half. Conley Cooper scored four of her seven points in the final two quarters. Meanwhile, Leah Titus scored a tough lay-up while being fouled early in the third quarter and scored all five of her points after halftime.

Clara Caldwell battled hard down low throughout the game, coming away with several key rebounds to go along with five points.

“Leah Titus and Clara Caldwell were everywhere on the boards,” Roth said. “Especially in the second half and that’s key, you have to have that. You can’t give up second shots, and they both did a great job on that.”

OBA is now guaranteed at least a spot in the third-place game. They’ll advance to face Class A No. 2 Okarche (14-1), a team that has already bested them once this season. The Lady Trojans played the Lady Warriors close in that game until Okarche hit some late free throws to ice the game.

Roth said a potential rematch with the Lady Warriors has been on the team’s radar.

“We’ve been kind of circling this game to be honest,” he said. “Not that we took anything for granted, but it’s been kind of a motivator for us, so I expect us to come out really excited tomorrow and really pumped up. Can we beat them? We’ll have to wait to see, but we know we’ll come out with energy and play hard, because we’ve been looking towards that game, we want another shot at them, and now it looks like we might get it.”

OBA will face Okarche on Friday at 4:20 p.m. at the Stride Bank Center. The winner of the game will advance to the championship round, while the loser will move into the third-place game.