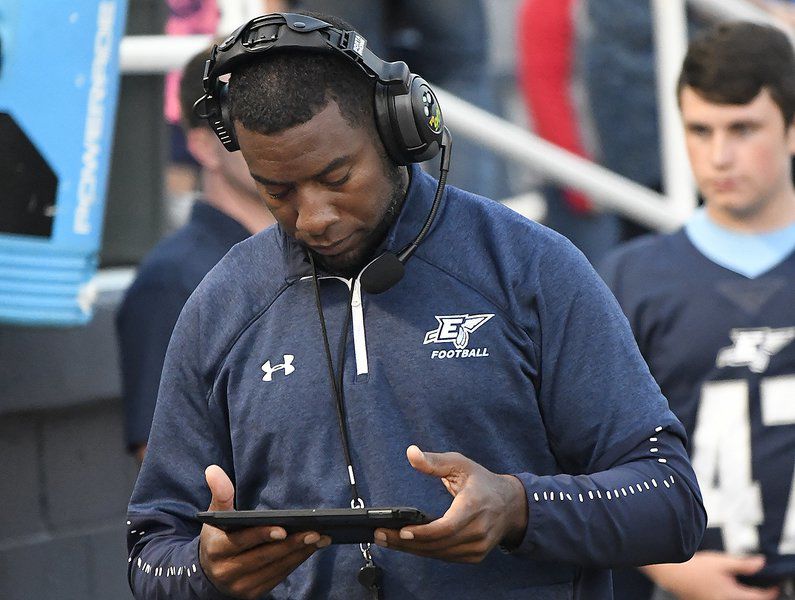 When the Enid Plainsmen football team walked off the field Friday night at D. Bruce Selby Stadium following a season-ending 56-7 loss to Broken Arrow, it marked the end of a season for the record books, but for mostly the wrong reasons.

Enid's 0-10 mark represented the first time in 111 years of Plainsmen football that Enid went winless for an entire season. They will enter next season on an 18-game losing streak - the longest in Class 6A1 - that extends back to the third week of the 2018 season. It is understandable for the home folks to be a bit jaded at this point. After all, they haven't seen a Plainsmen home win since the 2017 season.

How badly were the Plainsmen dominated this season? They were outscored 462-82 in 2019, the fewest points scored since the 1933 and 1947 Plainsmen scored 83 points.

It's certainly not the season first-year Plainsmen had coach Rashaun Woods would have preferred, but it's also a season that hasn't changed his outlook or his plans. Woods makes it clear he knew what he was getting into, taking over a program that had not had a winning season since 2010 and whose last trip to the postseason was in 2009.

"The message has been the same from the beginning," Woods said last week prior to Enid's season finale. "I have not wavered from that. I knew what I had when I stepped here on campus and it was just a matter of time before everybody else saw the same thing. ... No matter what anybody may say or speculate, we are who we are and right now we physically can’t compete at this level and have to do things from an early-on standpoint as far doing the right things in the weight room as early as 7th-grade."

Woods has a very good point. For too many years Enid neglected its middle school football which is the feeder, the basis, for the high school team. His predecessor, Steve Hayes, also saw that and identified that as a primary concern. It appears Woods and EHS are beginning to develop an actual program.

The other obvious factor is Enid's disadvantage in the numbers game. EHS has been woefully outclassed in 6A1 as it was in 6A2. There doesn't seem to be any relief in the near future either as EHS' enrollment continues to grow, while its athletic base remains stagnant. The demographics of the uptick in enrollment has not benefited the football program.

Some have suggested EHS petition OSSAA to move down in class and/or participate as an independent such as U.S. Grant and Capitol Hill. Neither is likely to happen and playing as independent is rather unappealing considering there were be no championship to strive toward achieving.

Others have suggested splitting EHS into two schools and playing as a 3A or 4A school. That too is unlikely.

No, Enid needs to find a way to at least become competitive. Woods has shown, by turning a winless John Marshall team into a state champion, that it can be done. But that was on the 3A level.

"If there is a difference between the two teams, for me, it is only the competition." Woods said. "We will always be one of the smallest 6A1 schools. But the quality of the player we put on the field has to to be better, per man, than teams we’re playing. In order to do that our weight program has to be top notch The commitment from the kids that do play has to be top notch. If we can’t do that, we will never compete. That is the situation."

While Woods came in with his eyes wide open, it actually became a little worse when several seniors who would have been counted on, were not going to be part of the 2019 team. By season's end only 10 seniors were on the team and only half of that number saw the field regularly.

It was a situation for Woods that was not unfamiliar.

"It’s the same that it was at John Marshall," he said, noting he had only around five seniors on his first Bears team. "From an athletic standpoint they could do some things but we were absolutely ran over. We could not compete. It’s exactly the same way. So if I take a 9th-grader right now, he should be stronger and faster because of the things we do in the offseason than the senior now. That is the goal is to get all the ships to rise together. Over time the freshman and sophomore will be better than the freshman and sophomore kids we have playing now."

The just-concluded season has been one of significant growing pains, but there were signs in the season finale that should give rise to some positive feelings looking ahead to 2020.

The development of Blake Priest at quarterback has been a major desire of the coaching staff. Priest has the strongest arm on the team and his development at QB would allow Enid to free up Maddux Mayberry to play receiver to take advantage of his overall athleticism.

Against the Tigers, Priest put together, statistically, by far the most consistent effort at signal-caller for Enid this season. He completed 7 of 8 passes for 116 yards, including a 66-yard touchdown to football newcomer, junior Mason Berry.

Still, Enid has a long way to go and has to develop players at many different positions, but it was a positive in a season where positives were desperately needed.

Woods has steadfastly shouldered the responsibility for the program's current progress, however slow it may seem to outside observers.

"Regardless of whose fault that anybody on the outside thinks it is, it is my responsibility now to physically prepare the guys so they’re ready to play at this level. That is as clear cut as I can be. It will take time."

When asked how he was holding up through the losses, he didn't hesitate.

"Don't feel bad for me," Woods said almost defiantly. "Don't feel sorry. I knew what I was getting into and I'm confident that if we go about things the right way, it will get better. I've seen it happen."