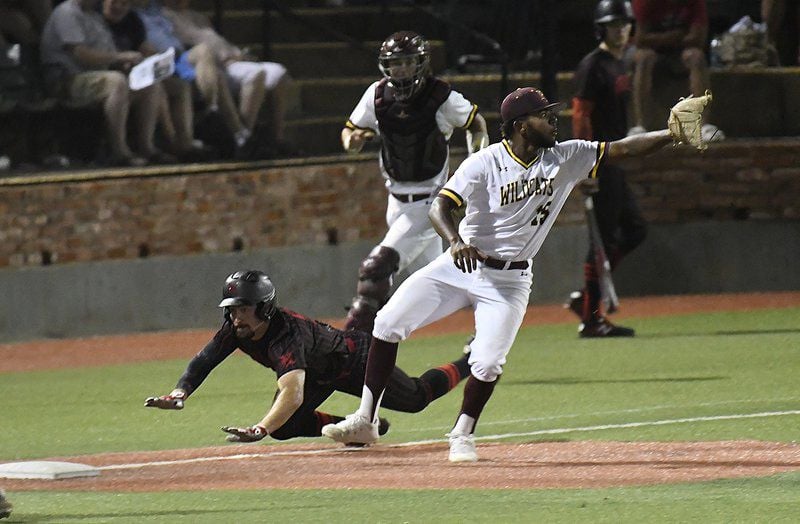 NOC Enid's Seth Graves dives into first base to beat Pearl River's Shemar Page to the bag during the NJCAA DII World Series Monday May 27, 2019 at David Allen Memorial Ballpark.

There was an electric feel at David Allen Memorial Ballpark Monday night.

The Northern Oklahoma College Enid Jets were playing top-seed Pearl River (Miss.) Wildcats in a crucial winner's bracket game. It had the atmosphere of a championship game even though it was only Game 2 of the NJCAA Division II World Series for both squads. It was a testament to how the community, which has always shown tremendous support for the Series, has embraced the Jets.

Personally, I was not able to make it to the ballpark that night until the eighth inning as my duties kept me in the office for most of the evening. After putting the sports pages to bed, I knew I had to get down to David Allen to see if the Jets could hang on to their 4-2 lead.

I wasn't sure how many people would be at the ballpark at the late hour (it was about 11:45 p.m.), especially considering the game was supposed to have started at 7:15 p.m. but was pushed back to 9:20 p.m. when one of the preceding games went nearly four hours. Additionally, it was a work night for most people, going back to work on Tuesday following the Memorial Day holiday.

No reason for concern. The ballpark was hopping and energized.

Fans were hanging on each pitch and boisterously shouting their encouragement for the hometown Jets.

The Jets rode the masterful pitching performance of Brandon Hudson and secured the win on a clutch outfield play by Seth Graves with two runners on base for the Wildcats and two outs in the bottom of the ninth inning. The win sent the Jets into the Final Four.

It is NOC Enid's second consecutive appearance in the Series and the support last year was strong, but this year it seems to have taken hold early.

During the season the attendance is frequently sparse as area sports fans are heavily invested in high school sports, but what this Series has shown is that once the deck is cleared and the Jets have center stage, they get plenty of love from Enid. If the Jets continue their run and make it to the championship game or games, it could be quite the sight at the ballpark and a championship celebration unlike any that has taken place in the 20 year history of David Allen or the 11-year history of the Series in Enid.

Keep it up Enid. The team is clearly enjoying your support and feeding off it.

The contribution to the World Series by NOC Enid isn't limited to just their games. NOC has taken an active ownership role as a host for the Series and that includes manning the Game Changer live stats and scoring system that has become something that is relied upon by media and fans alike.

During any given game during the Series, NOC athletic director Jeremy Hise can be found managing the Game Changer for each of the Series games. But it's not only Hise. Tuesday morning, when two games were being played simultaneously, Jets head coach Raydon Leaton took on the Game Changer duties for the second game. It's greatly appreciated guys.

NOC Enid also has been there to bail out the Series on a couple of soggy occasions.

Just as NOC Enid did when rains wreaked havoc with the Series schedule in 2015, the Jets didn't hesitate to make their facilities at Failing Field available to help move the Series along this year and keep it on schedule as much as possible. Like David Allen, Failing Field has an artificial infield.

Now, that's being a good host.

After the record-setting 21-14 victory by Madison, Wis., over NE Nebraska in the aforementioned four-hour marathon game on Monday in the World Series, both teams had a quick turnaround. But if anybody thought it would be a detriment, they proved otherwise.

Both found themselves playing about 15 hours later in the 9 a.m. games on Tuesday. The start times were moved up to get ahead of the weather. Madison took on Mesa at David Allen and NE Nebraska battled Pasco-Hernando in an elimination game at Failing Field.

Trailing 3-1 in the bottom of the ninth inning, Madison rallied to tie the game and then won it on a 12th-inning walk-off home run by Nick Gile as the Wolfpack became the second team to reach the Final Four.

Grab an energy drink and hit the field. Rest is clearly overrated when there is a World Series title to pursue.

Ruthenberg is sports editor for the News & Eagle. Contact him at daver@enidnews.com.