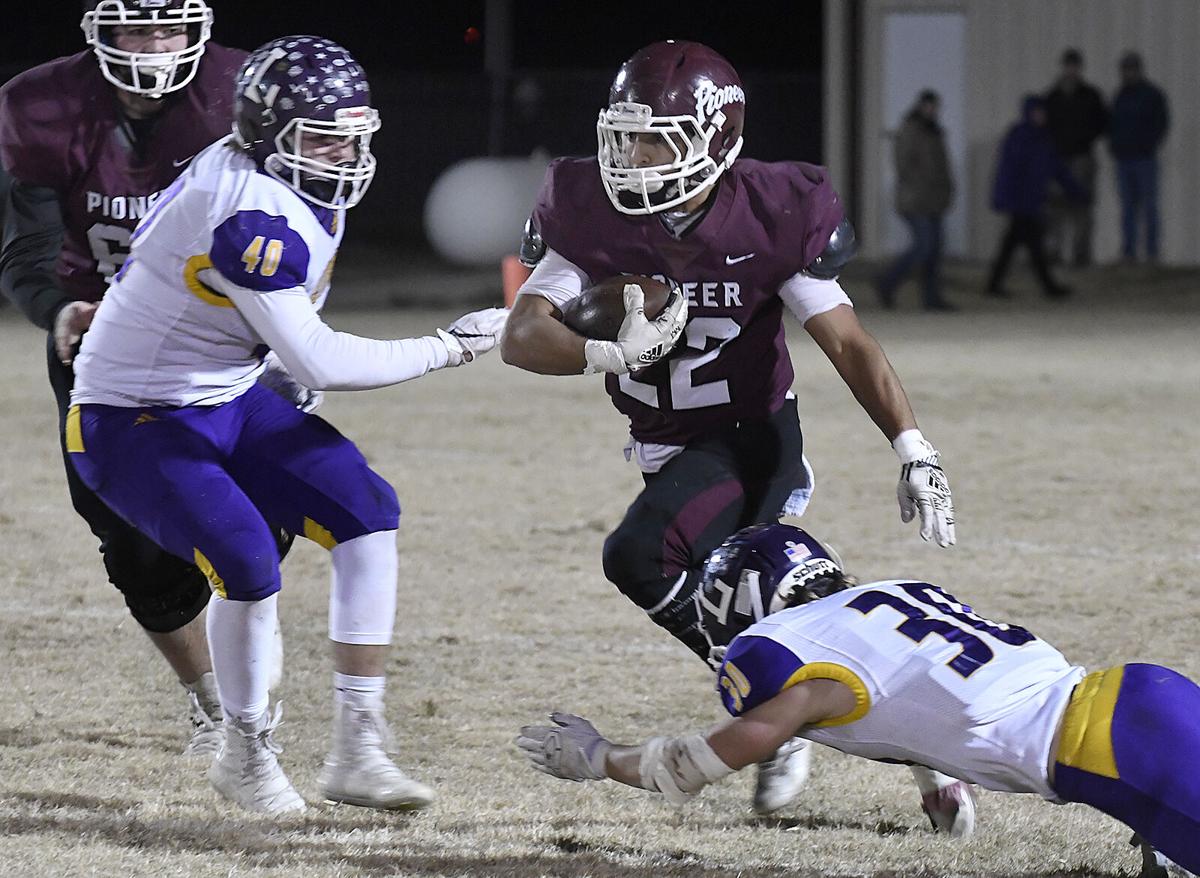 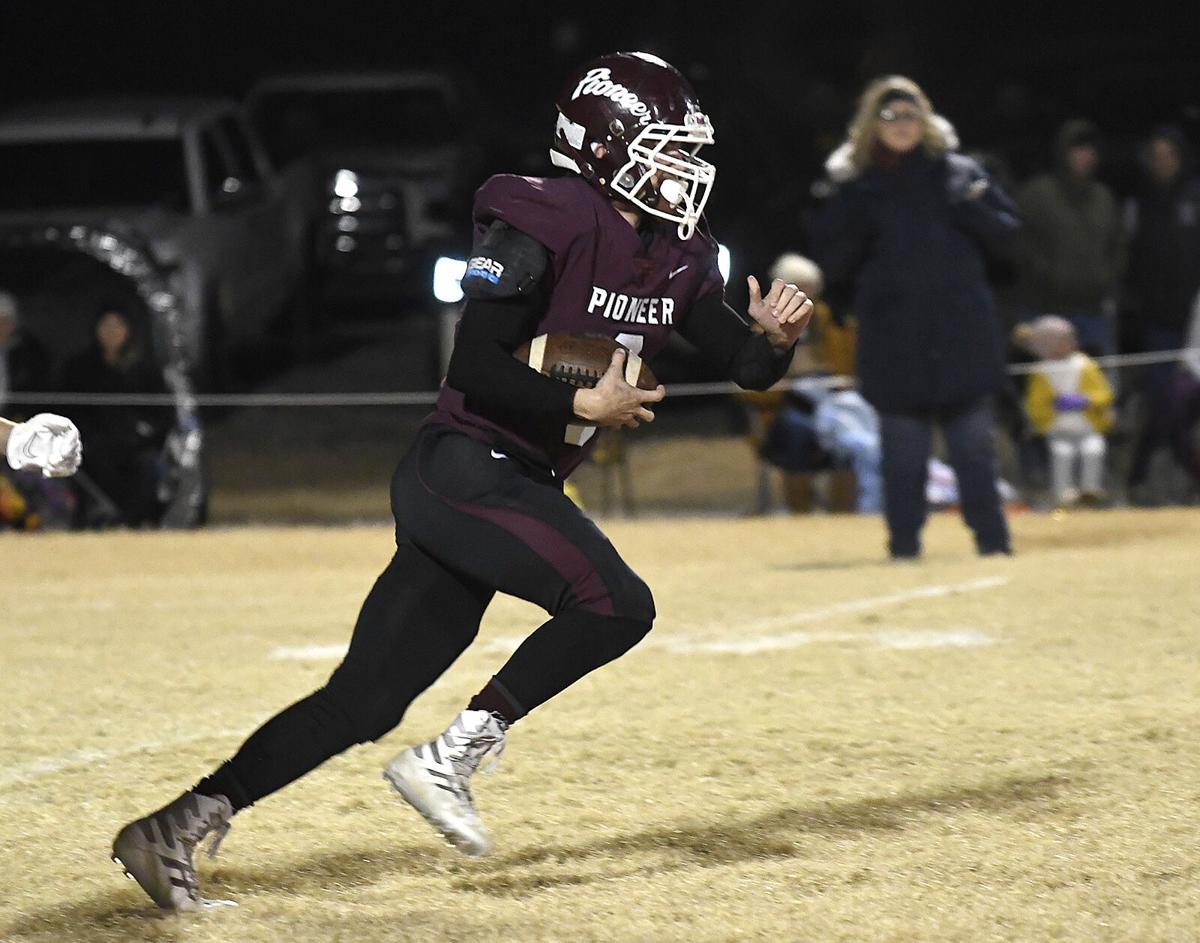 Pioneer's Ty Dennett takes off on a 86 yard kickoff return for a touchdown against Laverne in the class B state semi-finals Friday, December 11, 2020. (Billy Hefton / Enid News & Eagle) 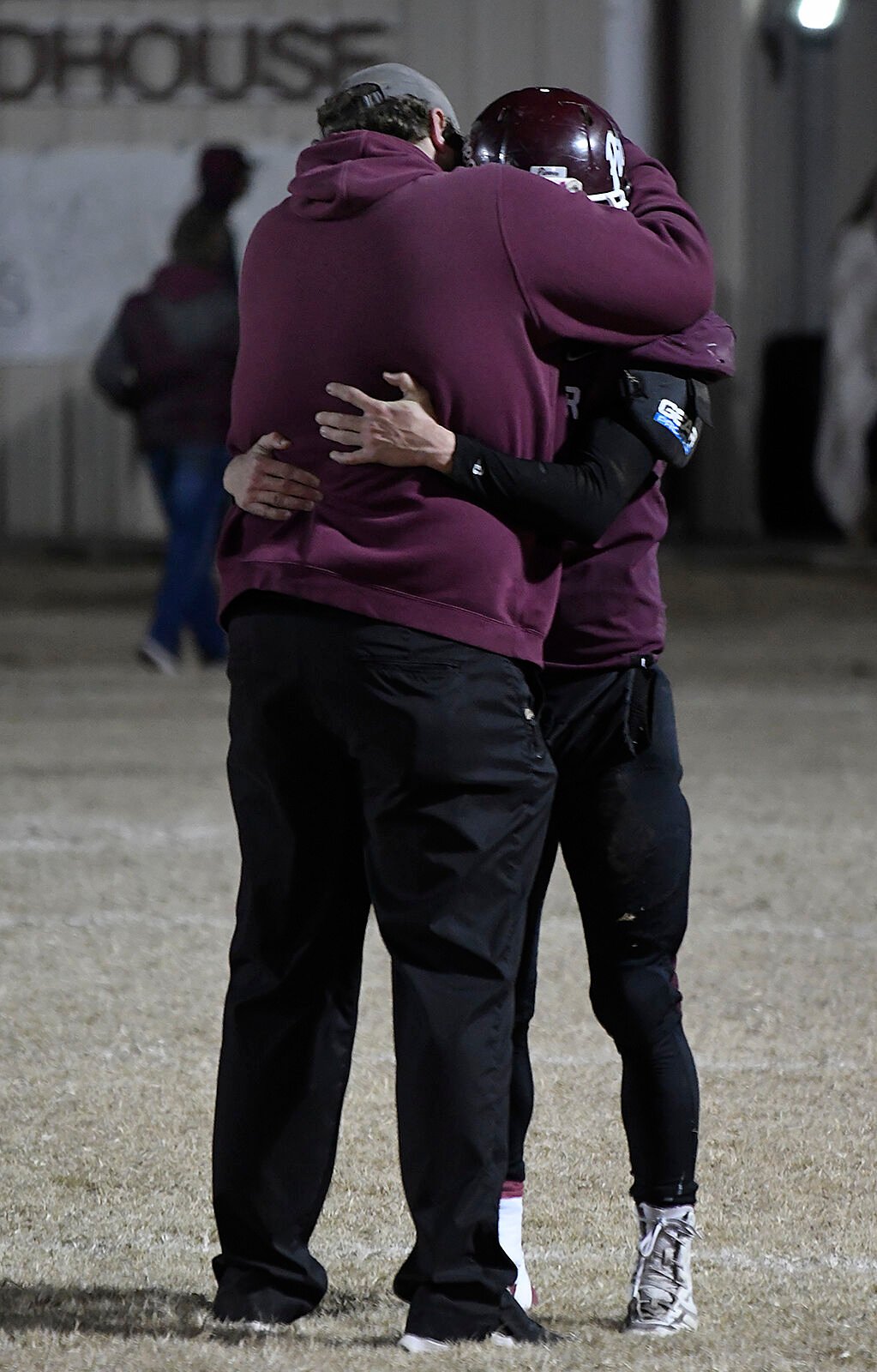 Pioneer's Ty Dennett takes off on a 86 yard kickoff return for a touchdown against Laverne in the class B state semi-finals Friday, December 11, 2020. (Billy Hefton / Enid News & Eagle)

WAUKOMIS — The Pioneer Mustangs’ season ended Friday in a 38-12 loss to the Laverne Tigers in the Class B semifinals at Pioneer High School.

The Mustangs (10-4) were able to put up a better fight in their second matchup with the Tigers (10-1) after losing 50-14 on Sept. 25. Pioneer trailed 24-12 at halftime Friday despite giving up two turnovers and missing one of their top playmakers, Leyton Parker, to injury late in the first quarter.

Pioneer head coach Gus Overstreet said he couldn’t be more proud of the way his team finished the season.

“That I love em.” Overstreet said when asked what he told his team after the game. “They’re my boys and I’m proud of them. They did something that nobody thought that we could do and I couldn’t ask for any more.”

Pioneer came hot out of the gate with an 86-yard kickoff return for a touchdown by Ty Dennett. Laverne scored quickly on its opening possession and seemed poised to take the lead after forcing Pioneer quarterback Dennett to throw an interception on its next drive.

On the ensuing drive, Pioneer forced a fumble which was picked up by Robert Newberg, who carried it 60 yards for a Mustang touchdown, giving his team a 12-8 lead late in the first quarter.

“I think it’s the biggest measuring stick.” Overstreet said of his team’s second matchup with the Tigers, “We were supposed to get 45-ed this game. We weren’t supposed to be in this game and we were and that’s a testament to those boys and how much work they put in. We weren’t the same team when we played them earlier in the year, we’re a completely different team.”

Pioneer’s offense began to struggle though when Leyton Parker got injured on the next drive. Parker led the team coming into the game with 21 touchdowns on the year.

The Mustangs had several players miss time due to injury before the game was over including Dennett and Caden Humphries. Pioneer was forced to look deep into its roster to replace those who had been injured and ended up playing four different players at quarterback throughout the game.

Laverne went on to score 26 unanswered points to finish the game. The Tigers’ shortest score of the game came on a 25-yard touchdown run by Houston Bockelman in the third quarter.

“That’s what we told them at halftime.” Overstreet said, “We felt like they couldn’t consistently drive the ball. It was always a big play and if we could’ve made them keep driving the ball we would’ve gotten more three-and-outs, but we just would make one little mistake and they capitalized.”

Bockelman ended the game with three touchdowns, two receiving and one rushing. The Tigers went to Bockelman on third down and long and Peyton Freeman was able to find him wide open behind the secondary on both of his touchdown catches.

“We just weren’t following the ball well.” Overstreet said, “We weren’t getting off the blocks, if we got off the blocks we would’ve done a bit better and instead of arm tackling just wrap up and drive our feet … like I told them, it would’ve been a totally different game.”

Dennett struggled in his final game with the Mustangs. He threw two first half interceptions and played injured for most of the game after taking a sack in the second quarter.

“Ty got banged up.” Overstreet said after the game, “Everyone’s banged up when you’re playing in the semifinals, everybody’s banged up. He got his ankle rolled up a little bit, knee got twisted a little bit. But you know that boy kept playing and played hard for me. That’s all I could ask.”

Pioneer will be forced to replace four seniors heading into next season, a task Overstreet says won’t be easy given the impact this group has had on the program. The group includes Dennett, Marzell Washington, Brandon De La Torre, and Jacob Smith.

“Leadership … the role that they play … the stamp they put on this program. They played Pioneer football how it’s supposed to be played. They played it how I wanted it to be played. For those four seniors, I couldn’t ask any more of them. Deli, Jacob, Marcell and Ty … I love those boys, I’ll always remember them, always.” Overstreet said.

The head coach said that even though the game didn’t end with the result they wanted, his program has a lot to look forward to moving forward.

“We’re only losing four guys and they’re going to be hard guys to replace but we bring back the bulk of our team. I still like that and the thing is we’re going to be hungry. We made the semifinals but now it’s time to make it a little farther.”

Laverne will face Dewar Dec. 19 in the Class B championship game at Northwestern Oklahoma State in Alva. Dewar defeated defending champion Shattuck, 54-14 Friday night in the other semifinal game.