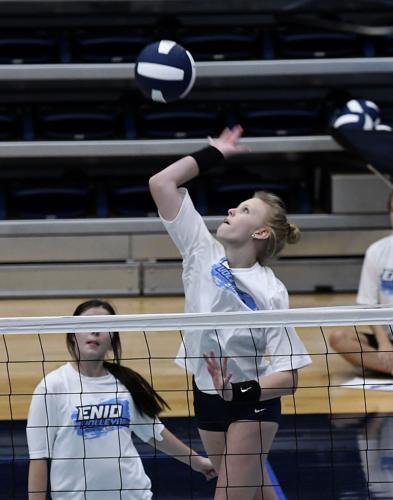 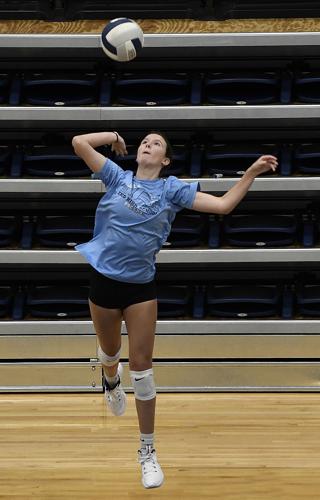 This story has been updated, originally we referred to Enid coach Gabe Watts as a third-year head coach, this is his second year in the program and the first as head coach

First-year head coach Gabe Watts expects an energetic bunch to take the court when Enid opens on Aug. 11, 2022, against Moore.

Five starters return for the Pacers, all seniors.

"This summer has been a lot of fun," Watts said. "We have quite a few seniors returning and we have good team chemistry this year. The girls are fired up and ready and so am I. We have a good culture going."

The sidelines could be a fun sight during games, senior middle hitter DeDe Levy said.

"We might have our own made up Tik Tok dance because we are a rowdy bunch," she said. "We want to get energy to the team."

Setter Lainey Morse, another senior is excited to get back to the court and said the preseason has bee good so far.

"The best part about the preseason is getting to know all the girls," she said. "We have some really goos freshmen coming up and I think it's a great idea to get to know them. We have been working hard."

Levy said one of the best parts of the team is their relationship.

"We are a really close-knit team," she said. "The seniors have been playing with each other for almost six years now so we are all really good friends."

While the energy has been upbeat, Watts knows there are areas to work on if the Pacers want to have a better season than they did in 2021.

"There are some things we need to work on defensively," he said. "We need to get better at reading the ball and those things but everyday we are coming in here and working. The girls are hungry to learn."

Sophomore Addison Polesky transferred from Alaska where she played on varsity as a freshman. She is also a triple jump state champion.

"She has been a great move-in," Watts said. "We don't get a lot of move-ins like her with her height and athleticism so it's been great. She took a shine to the girls and they all seem to like her."

The goal for Enid is clear, to get over the hump of the regional tournament.

"In the past we have struggled at regionals," Morse said. "Our biggest goal is to get out of the first round and win more games this year and work hard as a team."

One of the newer things for Enid is an upgraded gym, the Pacers are going into their third season in the new gym.

"It's great. We get to host a tournament in September," Watts said. "Hopefully the kids can get out of classes to come and watch. This is our home and we want to try and create a home court advantage that some of these girls didn't have as freshmen."

"The gym is great," Levy said. "My freshman year we had to play in 'the hotbox' with no air conditioning. Moving from that to the new gym is a major upgrade."

Girls, at least the Pacers do just want to have fun.

"I'm just excited to get on the court and have fun," Morse said.

I'm excited for my senior year," Levy said. "I want to be able to win games. I want to leave a good legacy before I move on."

Watts said the seniors have been key to the development of the freshman class.

"All of our seniors talk about what they were like when they were freshmen," Watts said of the impact the seniors have on the younger kids. "They talk about the things they liked and what they didn't like. They have really taken all the freshmen under their wings and have bene giving them rides to and from the stadium to life and have been a sounding board for the younger kids.

Another name to watch is freshman Taylor Woods. Watts expects Woods to start the season with the junior varsity team but said Woods could see some varsity action if she progresses.

In Tuesday's scrimmage against Chisholm, Woods had five points with the varsity team.

Watts said the ultimate goal this season is to leave a legacy for the next classes to build on.