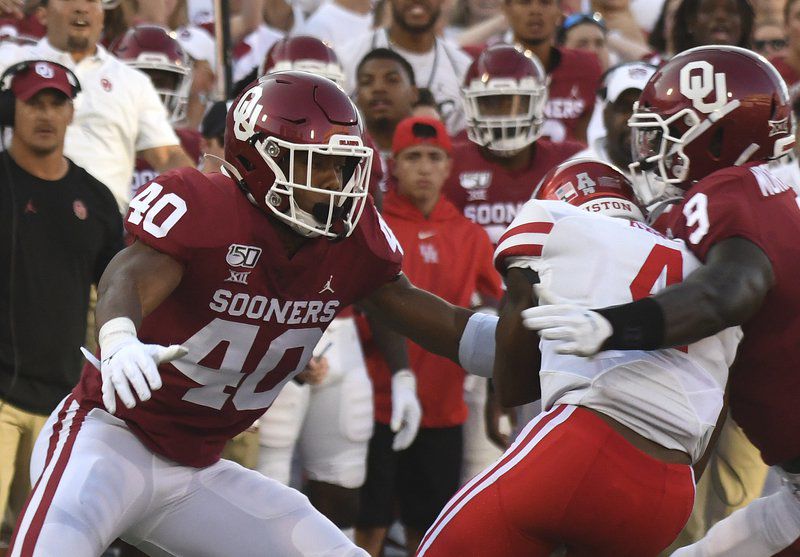 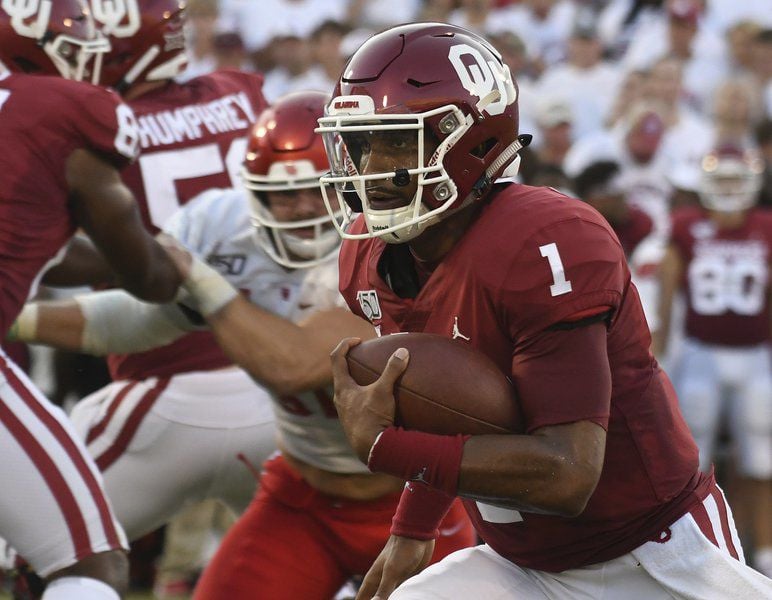 NORMAN, Okla. — Lincoln Riley joined in celebrating with Oklahoma’s defensive coaches. Roy Manning’s arms were bent at the elbow and trembling and so were Alex Grinch’s.

OU stopped Houston on 4th and 3 with time ticking down in the fourth quarter of the fourth-ranked Sooners’ 49-31 victory Saturday.

Kenneth Murray pressured Houston quarterback D’Eriq King into an incompletion. It was a small victory, but OU’s crowd didn’t think so. It rose to its feet.

“That play was simply me doing my job,” Murray said. “I got caught up down the line of scrimmage and was just playing fast, and I had a chance to go get him. So I went to go get him.”

Jalen Hurts challenged OU’s record books and sparkled in his debut with the team. Riley’s offense looked capable of keeping up with his other prolific ones.

But for those waiting for the Sooners to take another step, potentially winning the program’s first national championship since 2000, better defense has long been the prescribed medicine. Last season was a struggle in that regard.

OU looked improved, though. Houston (0-1) averaged 44 points and 295 yards passing last season, but didn’t race the Sooners up and down the field as many predicted.

The Sooners (1-0) forced punts in Houston’s first two offensive series and had given up just 50 total yards with 6:34 until halftime.

Late in the first quarter, King got the Cougars to OU’s 31-yard line after a 25-yard scramble. But defensive end Ronnie Perkins sacked the Houston QB on third down and forced a fumble that wobbled away from several Sooners in the area.

That was Grinch’s one regret: His players didn’t force a turnover and he wants at least two per game.

But there was increased pressure and disruption behind the line of scrimmage as evidenced by three sacks in the first half. Murray led OU with 13 tackles and 7 solo and played at the pace Grinch’s “Speed D” emphasizes.

OU was approaching a first-half shutout until King finally got rolling with under five minutes before half. He led an 81-yard drive that resulted in a 22-yard touchdown by Kyle Porter, who caught a short pass and easily got past Tre Brown for the score.

That was a shade of OU’s old defense, the one so often abused last year.

“I thought we were outright dominant early … until that drive,” Riley said.

Still, Houston had 132 yards and 10 points by halftime. Hurts had rushed for almost that much by that point. He finished with 176 yards on the ground, in addition to 20-of-23 passing for 332 yards and 6 total touchdowns in a stellar debut.

Besides a fumble in the first half — which would have been costly if Houston had turned it into seven points the other way — and another drop he and running back Rhamondre Stevenson contributed to, it was a near perfect beginning for the Alabama transfer.

Hurts became just the second OU quarterback in history to throw for at least 300 yards and rush for 100 in a single game. The other was Kyler Murray, whose single season as OU's starter ended with him holding the Heisman Trophy.

Hurts' passer rating finished at 251.3. His 508 total yards of offense are fifth-most in school history, behind marks set only by Baker Mayfield and Landry Jones.

His ground production especially turned heads. It was the second-most rushing yards by an OU QB in school history, behind Thomas Lott's 195 against Kansas State in 1976.

Charleston Rambo put the game out of reach when he caught a Hurts passed and pulled away from Houston's secondary for a 56-yard touchdown with 12:38 left in the third quarter. Rambo finished with three catches for 105 yards to lead OU's receivers.

“There’s still a lot we can improve on,” Hurts said quietly, in what was a typically vanilla press conference.

OU’s offense hasn’t the program’s concern in recent years, but the other side of the ball has. The Sooners hope that changes.

“To be an elite defense, to be a good defense — and certainly we’re a long way from being either — is you’ve got to be a finisher,” Grinch said, speaking on the positives behind the fourth-down stop. “You talk about takeaways. Well, takeaways are a finish to a play … It’s that excitement of bowing up.”

Palmateer is sports editor for The Norman Transcript, a CNHI News Service publication.

Have a question about this story? Do you see something we missed? Do you have a story idea for the Enid News & Eagle? Send an email to daver@enidnews.com.