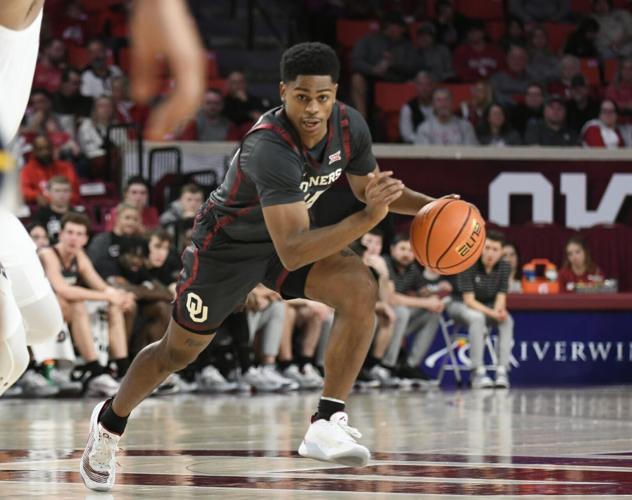 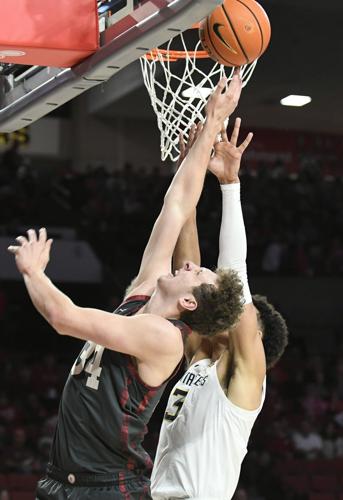 NORMAN — Oklahoma was again on the verge of collapsing.

Despite shooting nearly 60% from the floor, and holding a lead for nearly the entire game, West Virginia kept fighting. After a flurry of easy baskets at the rim, the Mountaineers tied the game at 70-70 with 1:43 to go.

The Sooners offense went quiet at the worst time, failing to score a basket in the final six minutes. But their saving grace came at the free throw line.

After Grant Sherfield missed on a jumper with 31 seconds to go, Jalen Hill got the offensive rebound and was fouled. He made two free throws to give the lead back to the Sooners.

The Sooners then got a crucial stop on defense, and Hill again made two free throws to extend the lead to four. Tanner Groves hit a pair of crucial free throws with 18 seconds to go, and Sherfield split a pair in the double bonus to seal the 77-76 victory Saturday at Lloyd Noble Center.

It was almost ironic that free throws made the difference, as the Sooners entered the contest with the lowest free throw rate in the Big 12. But they made 7 free throws in the final 31 seconds and converted 18-of-25 attempts for the game.

They also got help from West Virginia’s struggles at the line. The Mountaineers made 8-of-16 for the game and missed some crucial attempts down the stretch.

“Man, you can’t ask for anything more than (getting) the confidence of pulling it out in the close ones,” OU coach Porter Moser said. “... Sometimes it’s not one thing. Sometimes it’s just you gotta find a way. There’s a million things that are gonna win or lose you a game in the last few minutes.”

Here’s three other takeaways from the Sooners’ much-needed win over the Mountaineers:

1. Sooners win battle of the boards

If there’s one thing the Sooners have struggled with in conference play, outside of earning free throws, it’s rebounding. The Sooners came into Saturday’s contest ranked dead last in the Big 12 in team rebounding.

But they turned that around against the Mountaineers.

They finished with a 29-19 advantage on the glass, including a 6-4 advantage on offensive rebounds. They got a huge boost from their backcourt of Milos Uzan and Sherfield, who combined for 13 rebounds.

“We got every loose ball towards the end, every rebound was ours,” OU forward Jalen Hill said. “I just think we did a great job closing it out and just finding a way.”

The freshman guard did more than lead the team in rebounding (9). He also posted 11 points on 5-of-7 shooting while tying Sherfield for the team lead in assists (5).

Uzan has quickly become a productive and important player for the Sooners. He’s played 31 minutes or more in all five conference games, and he was on the floor for a team-high 38 minutes against the Mountaineers.

And his confidence is growing, too.

“(My teammates have) confidence in me so I’ve got to produce, honestly,” Uzan said. “I’m playing a lot of minutes… I’ve got to do something out there, so I just felt like I’ve worked on my game and it’s showing.”

Moser was impressed by Uzan’s performance, but he’s not happy with Uzan playing so many minutes.

“I’ve got to find a way to get Grant and him some rest,” Moser said.

3. No foul trouble for Tanner Groves

It wasn’t Groves’ best outing of the season.

He finished with eight points on only two shot attempts, though he hit back-to-back triples in the second half that helped push the Sooners’ lead to eight points.

But the biggest thing for Groves? Only finishing with two fouls.

It’s the first time in five conference games that he hasn’t recorded at least four fouls.

Up next: The Sooners take on Oklahoma State at 8 p.m. Wednesday in Stillwater. The game will be broadcast on ESPNU.

Jesse Crittenden is the sports editor of The Transcript and covers OU athletics. Reach him at jesse@normantranscript.com or at 405-366-3580