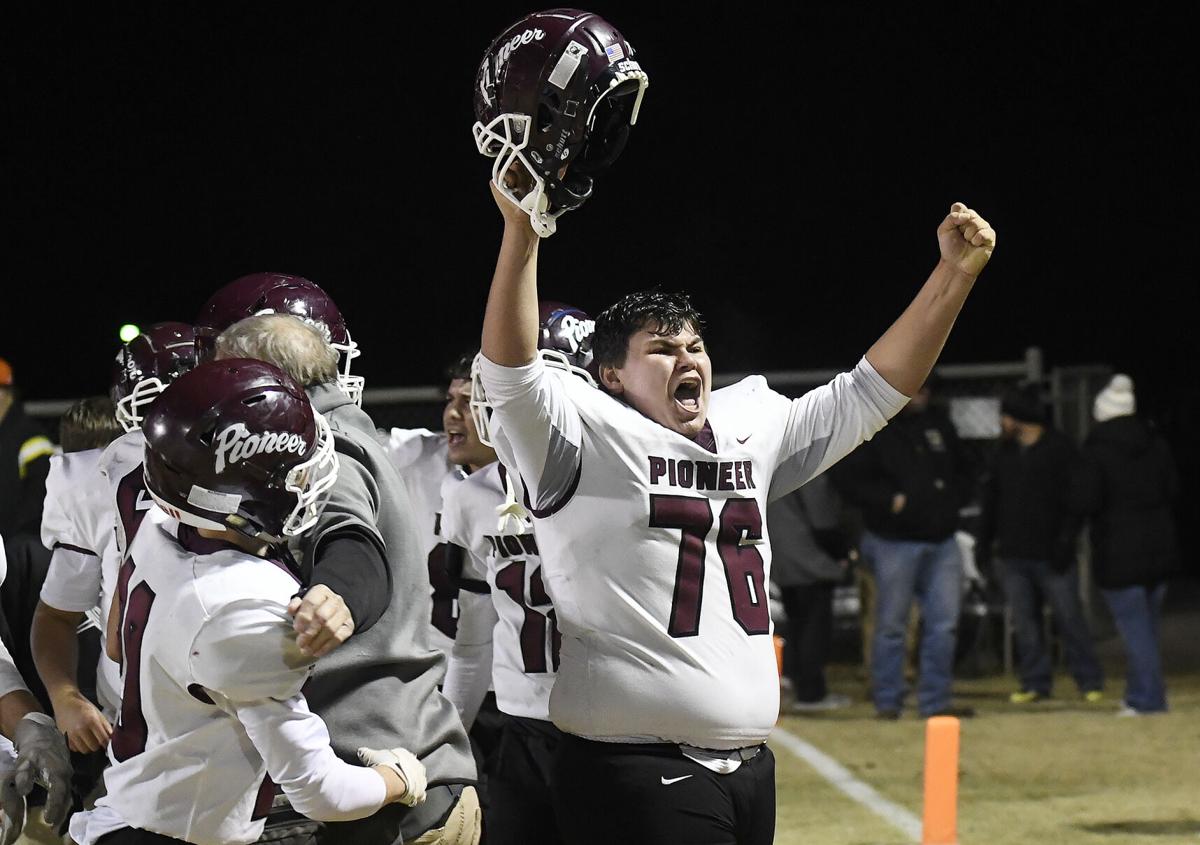 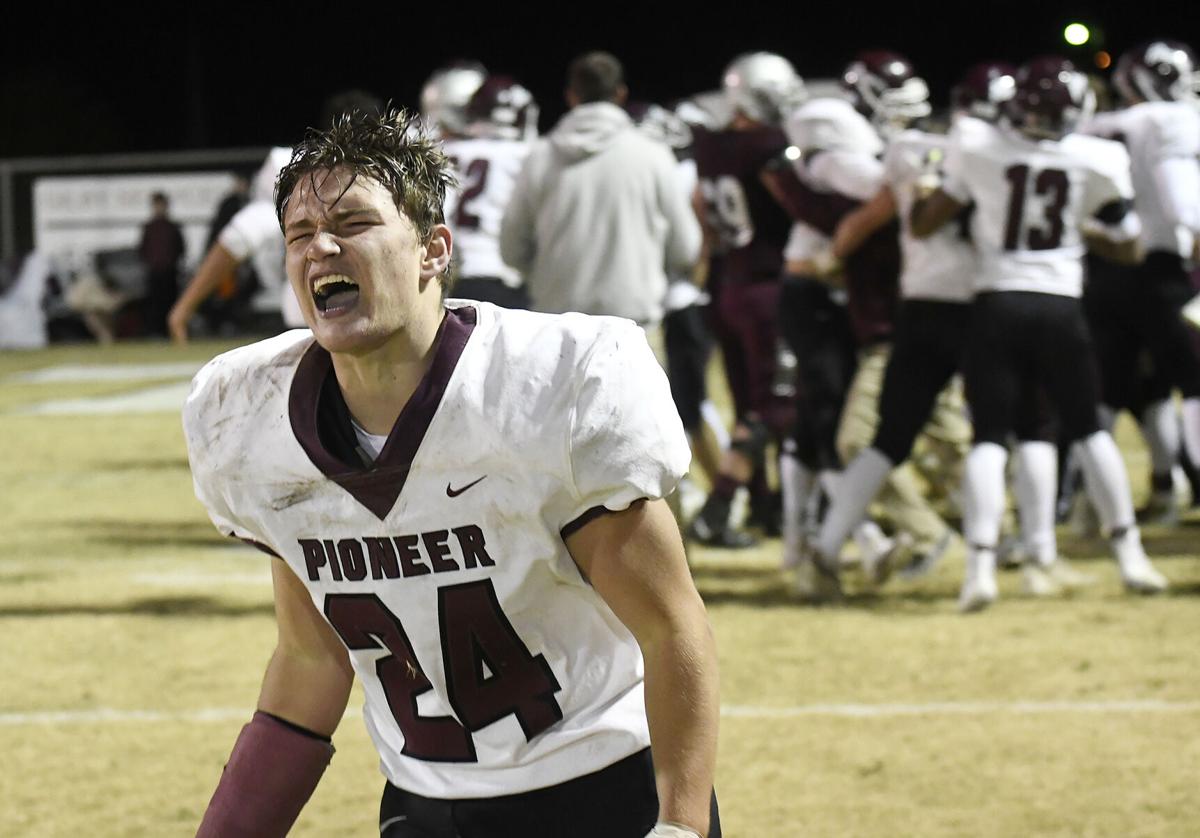 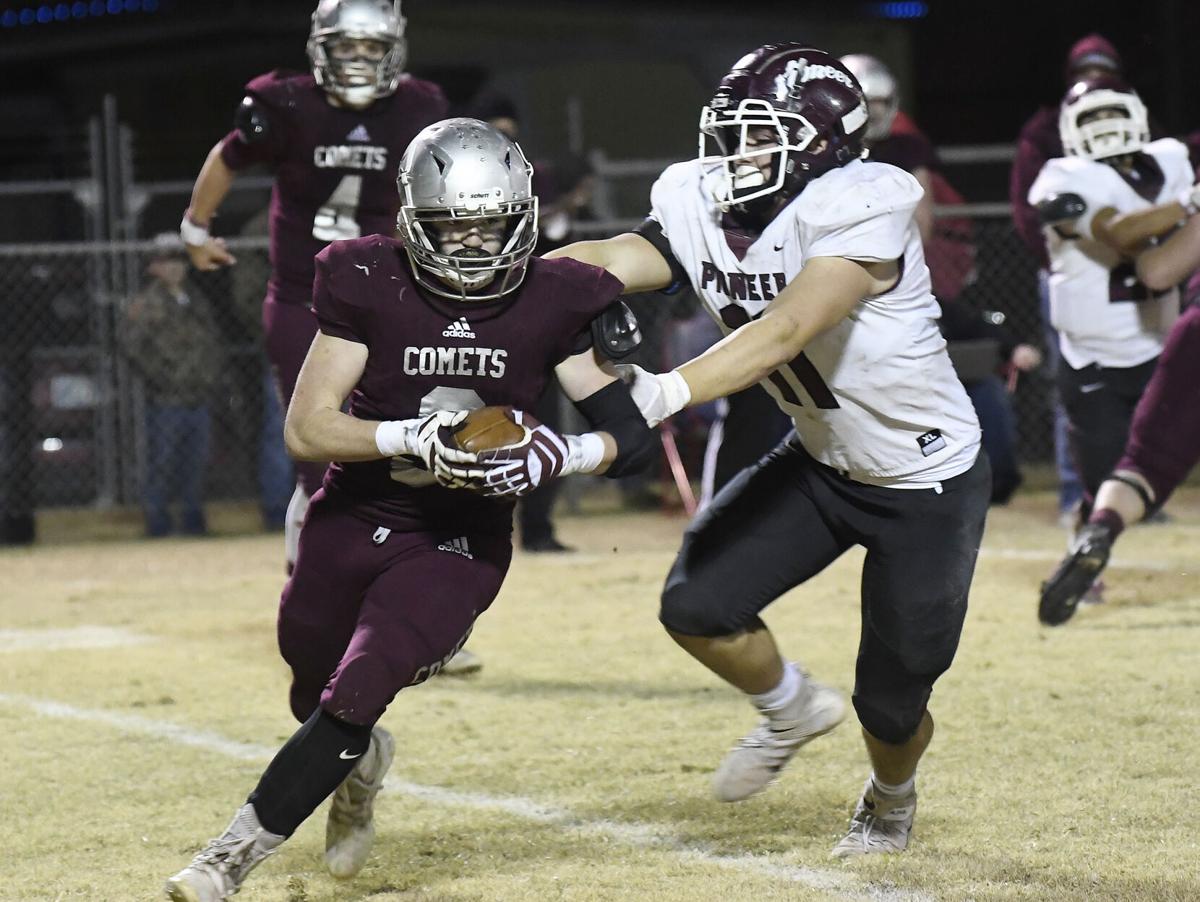 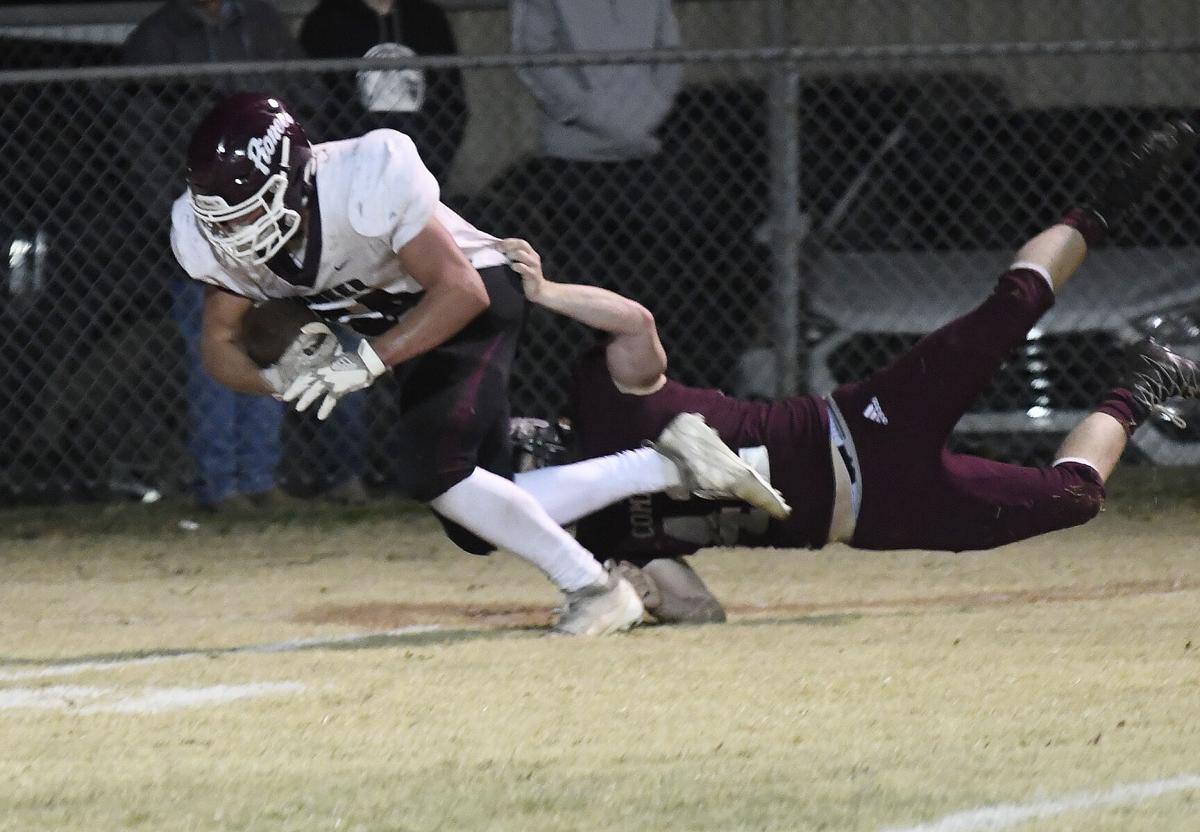 VELMA —Trailing 26-16 going into halftime, junior Robert Newberg wanted his Mustang teammates and coaches to know they wouldn’t be leaving Velma Friday night with a loss with in the Class B quarterfinal contest.

Pioneer trailed the entire game and was down by as many as 22 points early in the second quarter. Velma-Alma managed to extend its lead to 32-22 with 7:36 remaining in the game, but the Mustangs weren’t ready to go home yet.

“He told me we’re not losing this game at halftime, and I believed him.” Pioneer head coach Gus Overstreet said about Newberg following the Mustangs’ dramatic 36-32 win over Velma-Alma.

The running back/defensive end may not fill up the box sheet, but was a game-changer on both sides of the ball in the Mustangs’ playoff matchup. Newberg scored on a 29-yard touchdown pass, scored a two point conversion, recovered a fumble and was a key part of Pioneer’s comeback.

Pioneer’s offense took the field with just over a minute remaining in the game and trailing 32-30. On the first play of the drive, quarterback Ty Dennett rolled left and found Caden Humphries just over the Comets’ linebackers. Humphries shed one tackle and took the ball 56 yards for the touchdown, sealing the victory.

“It was a little nerve-wracking.” Overstreet said, “I think I got a little bit more gray hair now but you know that’s a testament to those boys. They fought to the very end.”

Pioneer came out of the gates slowly, especially on the defensive side of the ball where Velma-Alma quarterback Tristan Wainscott was able to get whatever he wanted. The dual-threat quarterback scored four times on the ground in the first half and once more through the air in the second half.

“Hats off to Velma, great program, great coaches they do a tremendous job. There was never a dull moment in that game.” Overstreet said.

Meanwhile the problems for the Mustangs were most obvious on special teams. The Comets were able to catch Pioneer off-guard twice in three consecutive onside kick attempts, which lead to two extra possessions for Velma-Alma.

By the time Pioneer’s offense took the field for just its third possession of the game, it had already conceded four touchdowns.

“I told them to recover the ball.” Overstreet said about his message to his team. “You don’t have to talk to them, they know what their mistakes are and we made some adjustments and put some different guys in but I was really pleased with what they did.”

The Mustangs looked like a different team on the defensive side of the ball following the intermission, forcing a fumble and a turnover on downs. When Pioneer had the ball it handed it off to Leyton Parker, who was able to come up with enough chunk yards to keep moving the sticks.

Despite their track record for being a run-dominant team, Pioneer was most successful in the passing game against the Comets. Dennett finished the game with three second half touchdown passes to go along with the one he threw in the first.

Four of the Mustangs’ five touchdowns came through the air.

“It’s kind of funny, they say we can’t throw the ball but we threw the ball tonight and threw the ball well.” Overstreet said, “That’s a testament to (Dennett), he stepped up there in the pocket and made some big throws and he went out there and won the game for us.”

The Mustangs handled the pressure of facing an early deficit well despite coming away with relatively easy wins in the first rounds of the playoffs. Overstreet says that he’s been impressed with the way this team has handled themselves this year.

“It’s a testament to their character.” Overstreet said, “That’s something I love about those boys. I love them to death. I’m so proud of them because they’ve had adversity, they know what it is. They’ve been 45-ed in this round before. We’ve been down before and we’ve always fought, that’s our mindset.”

Pioneer had several players coming up slow due to injury late in the game but none missed significant playing time.

Overstreet said it’s just the nature of the game and that he doesn’t foresee it being an issue going forward.

“Velma hit us in the mouth and made us like it for a while,” Overstreet said. “Just some bumps and bruises, nothing serious, we’ll be fine.”

The win advances the Mustangs to the Class B semifinals. They will take on the winner of Saturday’s Laverne vs. Davenport game next Friday.