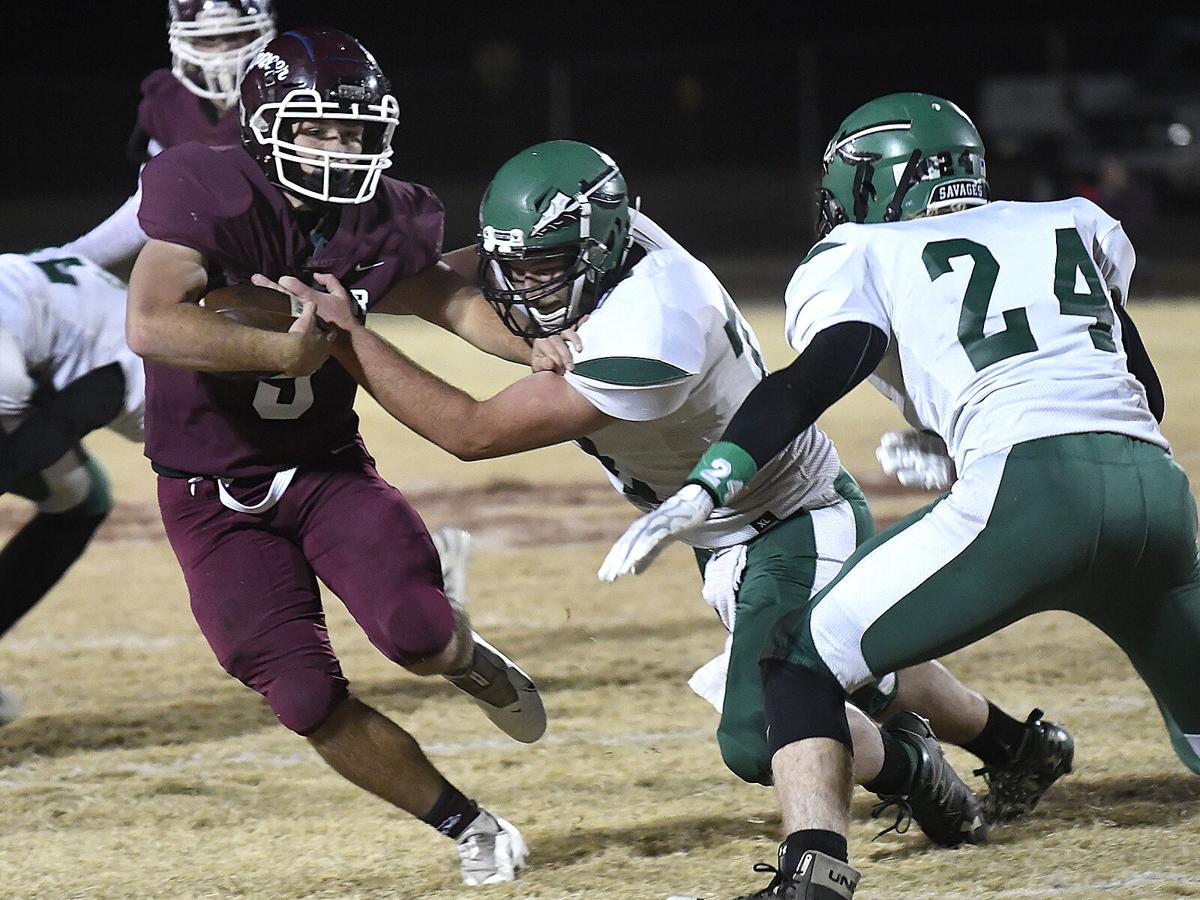 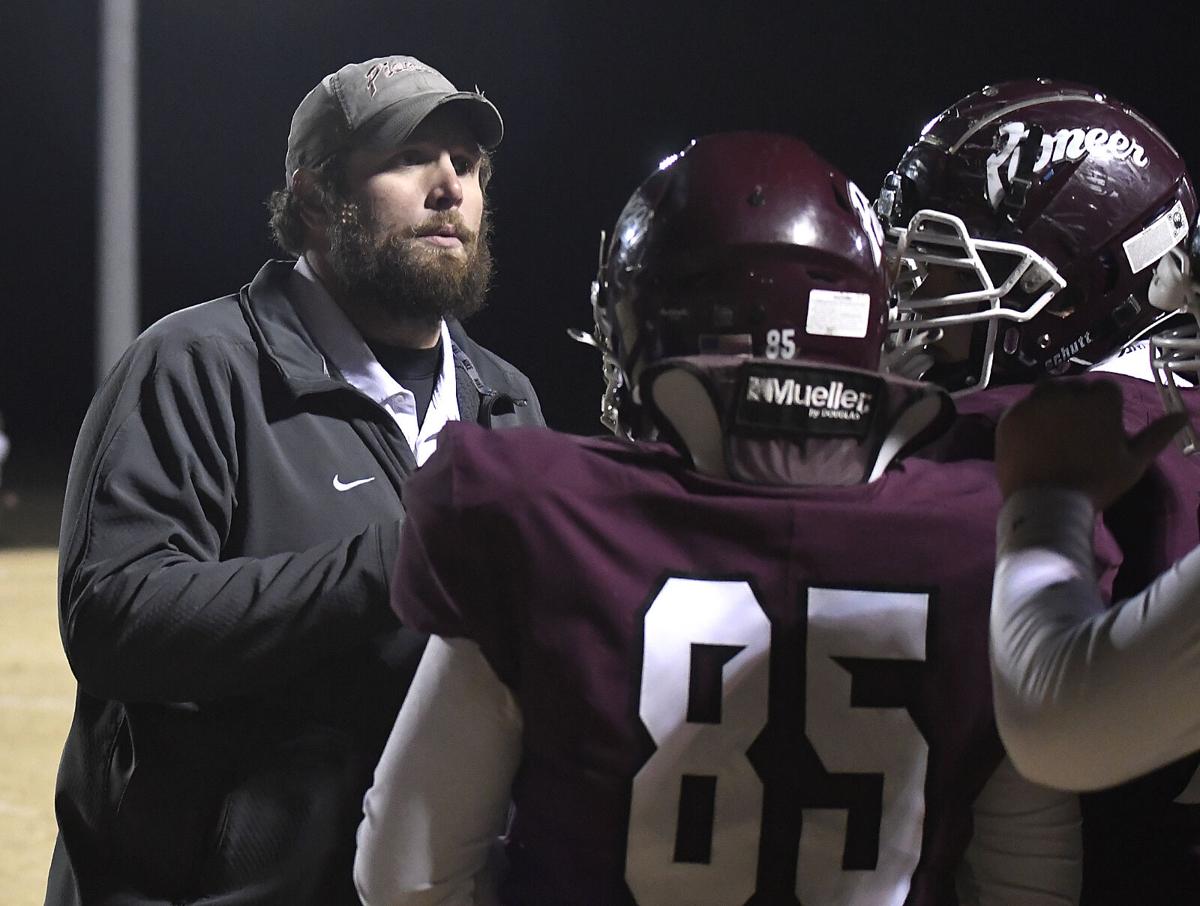 Pioneer and Velma-Alma have never met in their rich histories (seven state titles between them), but the 10-1 Comets will be no strangers to the 9-3 Mustangs when they meet Friday at 7 p.m. in Velma in the Class B quarterfinals.

Both teams are known for their smash mouth old school football and high power offenses (Pioneer averages 45.5 points per game and Velma-Alma 50.7).

"They are a good-looking squad,'' said Pioneer coach Gus Overstreet. "Their line is a mirror image of our line. Our kids are the same age, weight and height and they have a really good quarterback (Tristan Wainscott). They are a tough team.''

But just the team the old school Overstreet savors to play.

"It's a game we're looking forward to,'' he said. "It's smash mouth football. We will have our hands full."

The Comets, with Wainscott, can throw "when they need to,'' Overstreet said.

"He's the guy offensively and defensively (as a linebacker),'' Overstreet said. "You have to know where he is.''

The 6-foot-2, 190-pound Wainscott made an impression on Overstreet.

Velma-Alma has won seven straight since a 42-26 loss to Snyder on Sept. 25. The Comets avenged that loss in the second round of the playoffs, 58-56 behind five touchdowns from Lane Jones.

Jones had two touchdowns against Turpin, including the opening kickoff.

"To me, they are a mixture of Cherokee and Garber,'' Overstreet said. "They got some size and some speed. It will come down to the team that wants it the most and does it right Xs and Os wise. You have to take care of the ball and do the little things right.''

Pioneer has not had a turnover in the playoffs. It lost eight fumbles in the regular season and threw three interceptions. Defensively, though, it recovered 15 fumbles and intercepted nine passes for a plus-13 in giveaway-takeaway margin.

"It just comes down to us being us and knowing our brothers will do their job,'' Overstreet said. "If we do that, we'll be fine.''

Pioneer is averaging 338.1 yards per game on the ground. They have four backs with 10 or more touchdowns — Leyton Parker (20), Ty Dennett (15), Caden Humphries (12) and Marzell Washington (12). Rafael Torres has seven.

"We got a stable of backs,'' Overstreet said. "If one guy gets tired, there's another guy we can put in. They are all different.''

"Our success rests on the shoulders of those guys,'' Overstreet said. "They are the ones that open up the holes that we run through.''

Pioneer's defense threw Quinton backs for loss of 22 yards rushing in a 46-0 win last week. The Mustangs have held both playoff opponents (Drumright 89 yards and Quinton 26 yards) to under 90 yards in total defense. That's something they did only twice in the regular season.

"Everyone is playing extremely well,'' Overstreet said. "We're flying around to the football and staying on our blocks. We don't care about stats. We just care about winning. We had a great team effort on both sides of the ball last week.''

With both teams being ball control teams, Overstreet doesn't see weather as a factor in the game.

"We have had good practices,'' Overstreet said. "The boys are really locked on.''

Overstreet lost a coin toss Saturday for the right to host the quarterfinal game. He let Velma-Alma coach Randy Norton make the call.

"It is what it is,'' Overstreet said. "I really don't care where we're playing. As long as we're playing, that's all that matters''

Overstreet estimates it will be a three-hour trip to the Duncan area. Pioneer is accustomed to traveling with long trips to Cyril, Laverne, Olive and Barnsdall.

"It's not that big of a deal,'' he said. "We have a new activities bus that we have gone on once before. We'll be fine with traveling. We know we got to put on our work boots and bring our lunch pile and keep going.''

The two teams have never met in the playoffs.

"It's always exciting to play teams we have never seen before and see parts of the state we haven't seen before,'' Overstreet said. "We just have to make sure we do our jobs and not worry about the scoreboard.''

The winner faces the winner of the Davenport-Laverne game. The Mustangs lost to No. 2-ranked Laverne, 50-14 on Sept. 25.

"We got Velma-Alma on our minds right now,'' Overstreet said. "That's all we care about right now.''