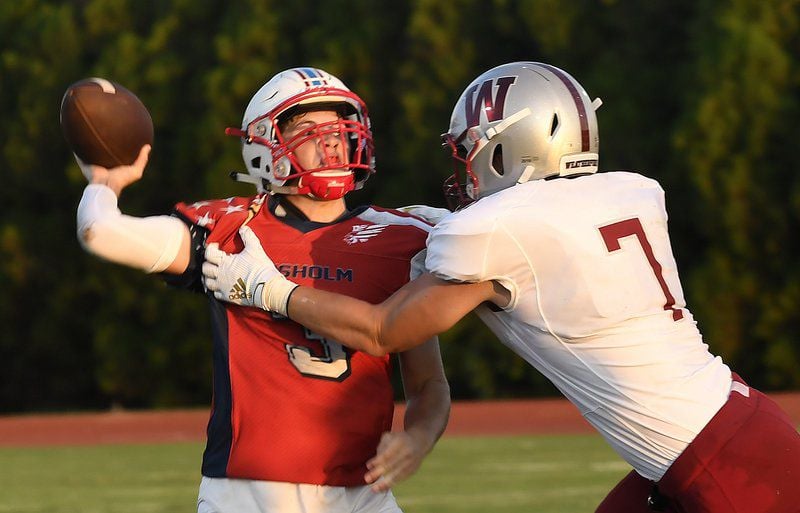 Chisholm's Kaleb Dent throws a pass while under pressure from Weatherford's Ryan Shields during the season opener at Longhorn Field Friday, Aug. 30, 2019. 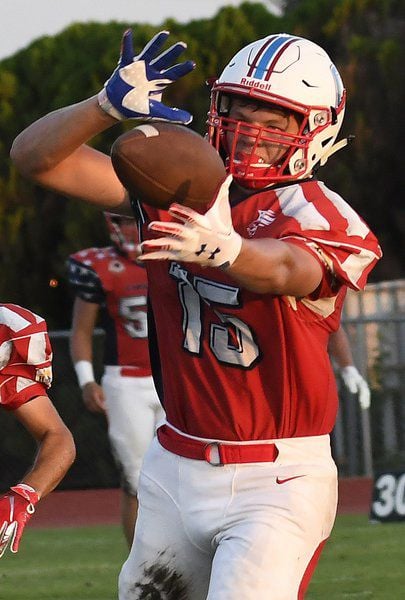 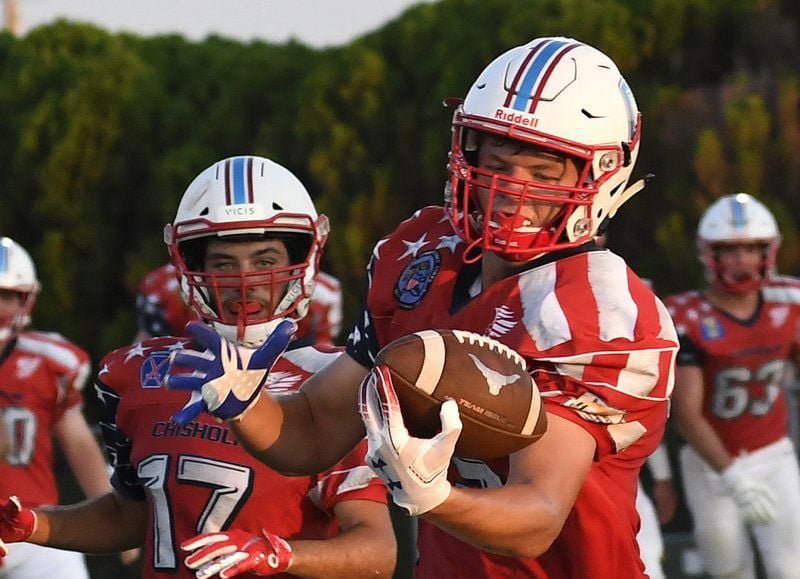 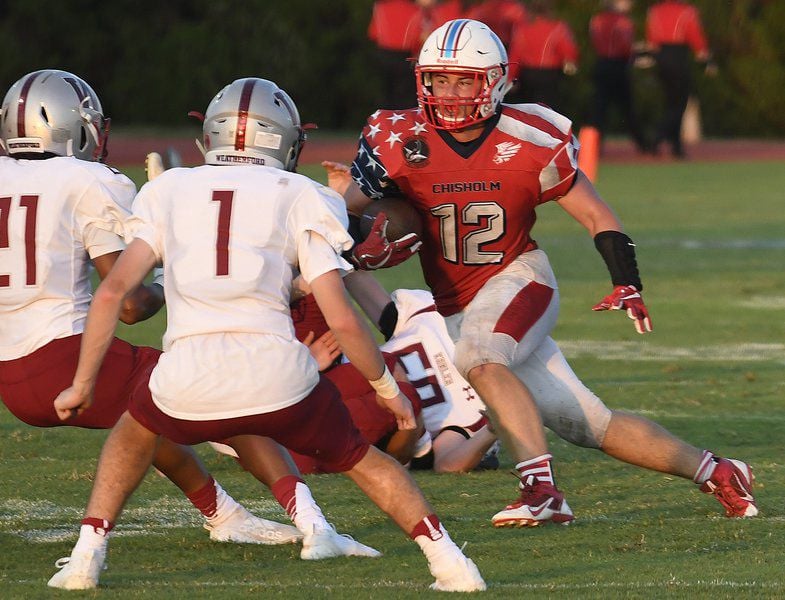 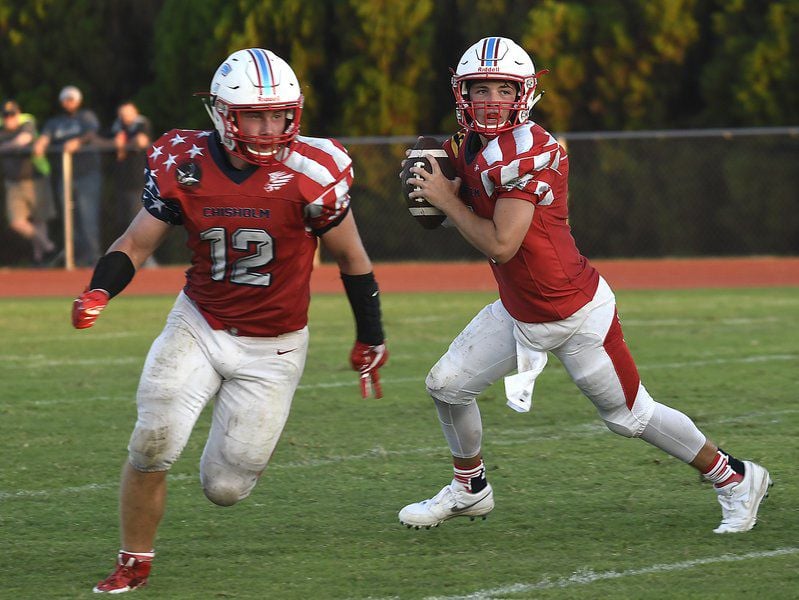 In this Aug. 30 file photo, Chisholm's Kaleb Dent rolls out behind the blocking of Bryce Boeckman against Weatherford at Longhorn Field. (Billy Hefton / Enid News & Eagle) 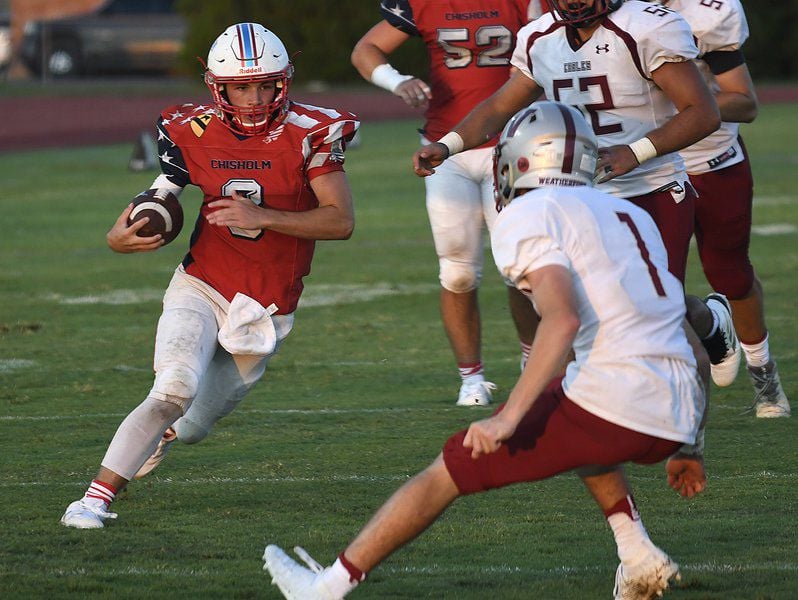 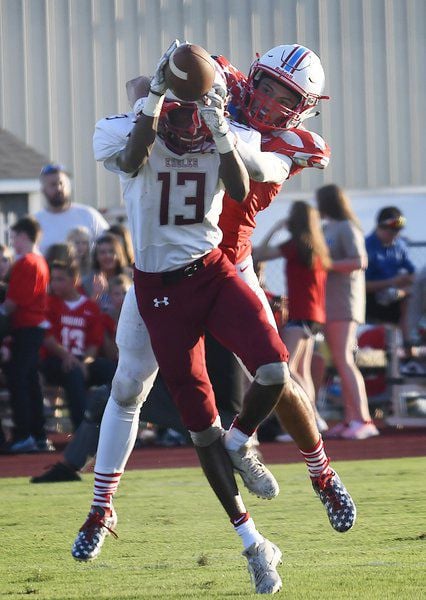 Chisholm's Kaleb Dent throws a pass while under pressure from Weatherford's Ryan Shields during the season opener at Longhorn Field Friday, Aug. 30, 2019.

In this Aug. 30 file photo, Chisholm's Kaleb Dent rolls out behind the blocking of Bryce Boeckman against Weatherford at Longhorn Field. (Billy Hefton / Enid News & Eagle)

ENID, Okla. — For the second time in as many seasons, Weatherford (1-0) defeated Chisholm (0-1) by more than two possessions Friday night in Chisholm.

Class 4A Weatherford racked up more than 200 rushing yards on its way to a 36-8 win over the 2A Longhorns. The Eagles defeated Chisholm last season, 35-14.

“(We) had some things that got out of focus,” he said.

The Eagles benefitted from a blown coverage in Chisholm’s pass defense and a turnover on a special teams play.

After ending their first two drives with turnovers, the Eagles scored on the first play of their third drive to take a seven-point lead. Weatherford quarterback Jaxon Ratteerree dropped back and tossed a 61-yard touchdown to receiver Rayshon Blatnick, who was wide-open running down the left sideline.

“That was just busted coverage for no reason,” Reinart said.

The Longhorns' offense ended their first two drives with a punt after going three-and-out. Chisholm looked to end its third drive in the same fashion. But the Eagles blocked the punt from inside the 30-yard line before scooping the loose ball up for a 26-yard touchdown run. Chisholm returned the favor by blocking the point-after attempt to keep it a 13-point game.

“So, we spotted them two,” Reinart said in reference to Weatherford’s touchdowns. “Then, a couple of missed tackles here and there and then give up (another) touchdown; it just kind of gets out of your hands.”

Last season, it was H-back Ethan Downs who was Weatherford’s leading back. This season, however, it was Sam Hoffman who was the catalyst for the run game. Hoffman racked up 105 yards on 15 carries.

Hoffman rushed for more than 80 yards in the first half with his biggest run of the half in the second quarter. On fourth-and-one on Chisholm's 34-yard line, Hoffman took a handoff from the shotgun and ran 31 yards down the left sideline before being tripped up near the end zone.

Downs capped off the drive with a three-yard touchdown run, making it 20-0.

Chisholm didn't answer until the offense's sixth drive of the half. After the Longhorn defense forced a three-and-out, Chisholm's offense got the ball back with less than five minutes to play. Senior quarterback Kaleb Dent led the offense down to 5-yard line thanks to a 19-yard pass to Nate Edwards and two first-down runs of 11 yards each.

On third-and-six from the 10-yard line, Chisholm drew an offside penalty to move the ball to the 5-yard line. On the ensuing play, Dent handed off the ball to senior tailback Lane Smith who rushed for touchdown to cut Weatherford's lead to 12-points at the half.

Dent said Weatherford’s defense “didn’t throw anything crazy” at the Chisholm offense but he felt like the Longhorns did not execute as well as last season.

“Everybody was coming off the ball hard,” he said. “Sometimes it just doesn’t go.”

The Longhorns got the ball to start the second half but finished the first drive with a three-and-out before punting the ball away. Weatherford then took the ball back and used an eight-play drive to extend its lead to 18 points.

The Longhorns' defense finished its night with two sacks and two turnovers, both of which came in the first quarter. Chisholm forced and recovered a fumble on Weatherford’s first drive and stopped the Eagles on a goal-line stand.

Senior linebacker Hudson Fields said while the defense “played well at times,” the Longhorns have to play a more complete game.

Ratterree pulled off a bootleg run of 32 yards to put the Eagles on the 5-yard line before running the ball in for the score to make it a 26-8 game in the third quarter. Ratterree finished the game with 43 rushing yards and 109 passing yards. He completed 13 of his 20 passes and capped off the night with a 38-yard touchdown pass at the start of the fourth quarter.

Dent finished his night completing eight of his 17 passes for 55 yards and two interceptions. Chisholm finished with 134 total yards of offense.

The Longhorns will head to Fairview to play the Yellowjackets next week.

Military night a success: At halftime, it was announced Chisholm raised more money for Warrior's for Freedom than any other high school in the state of Oklahoma from tonight's game by fundraising $20, 225 Friday night.