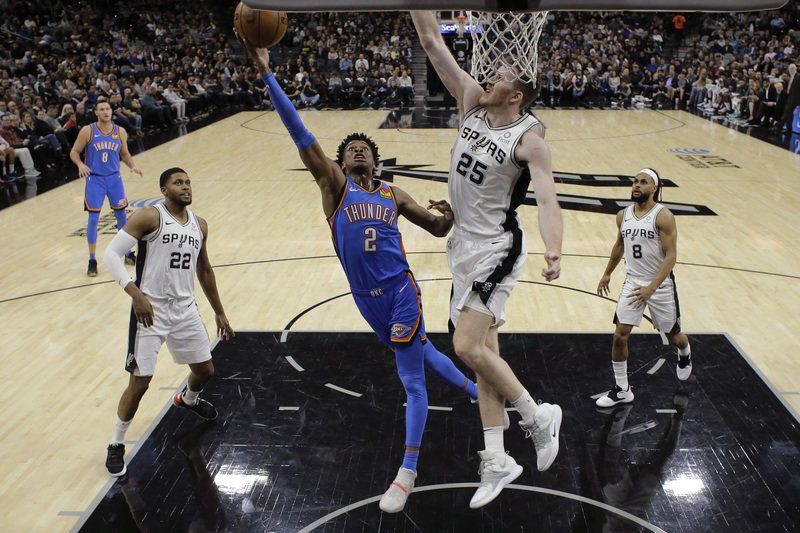 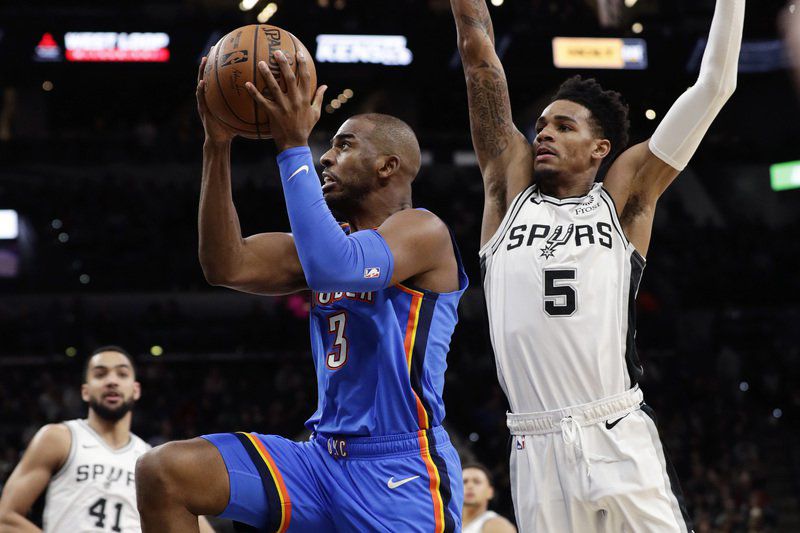 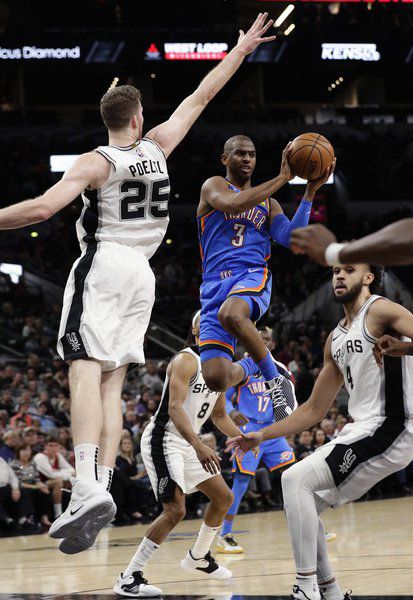 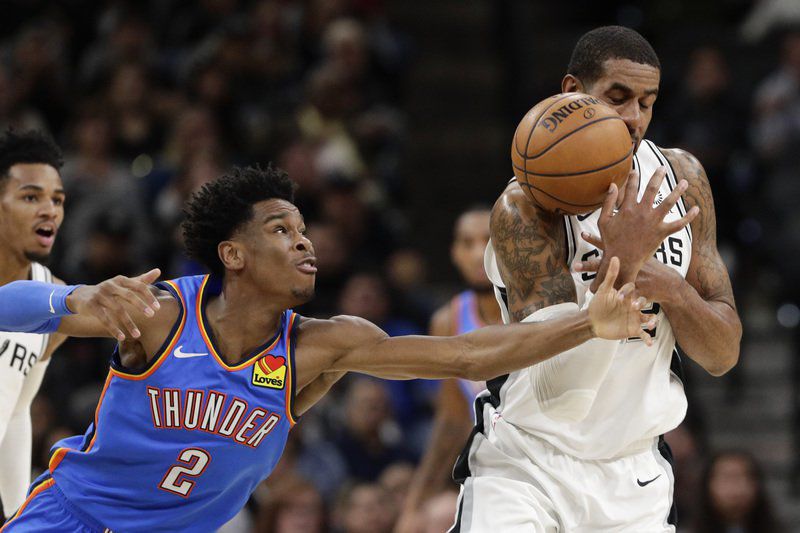 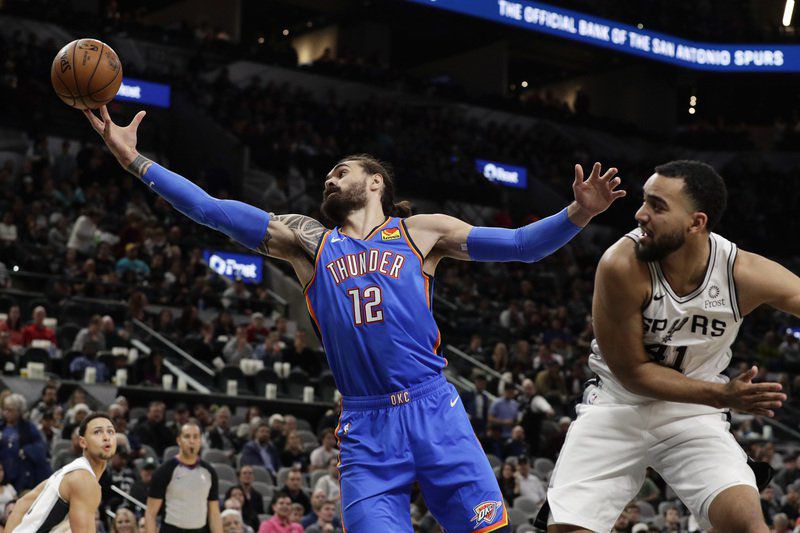 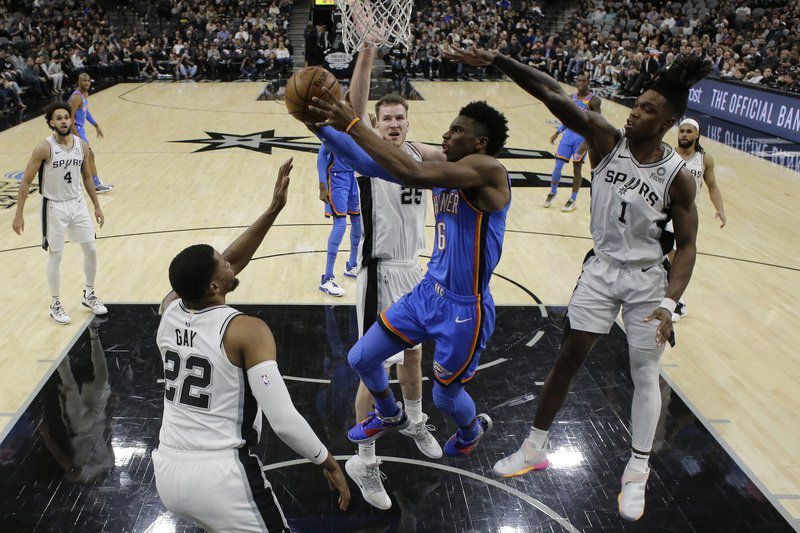 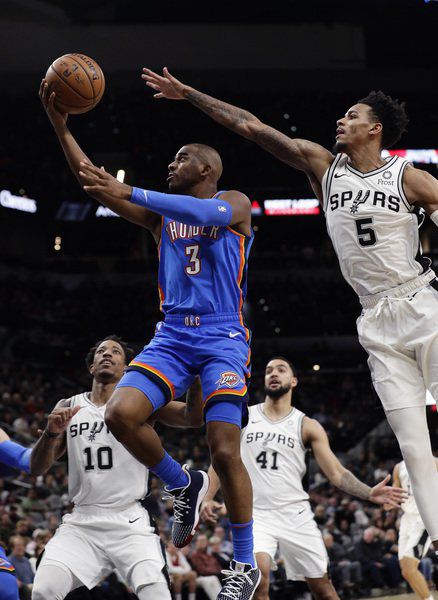 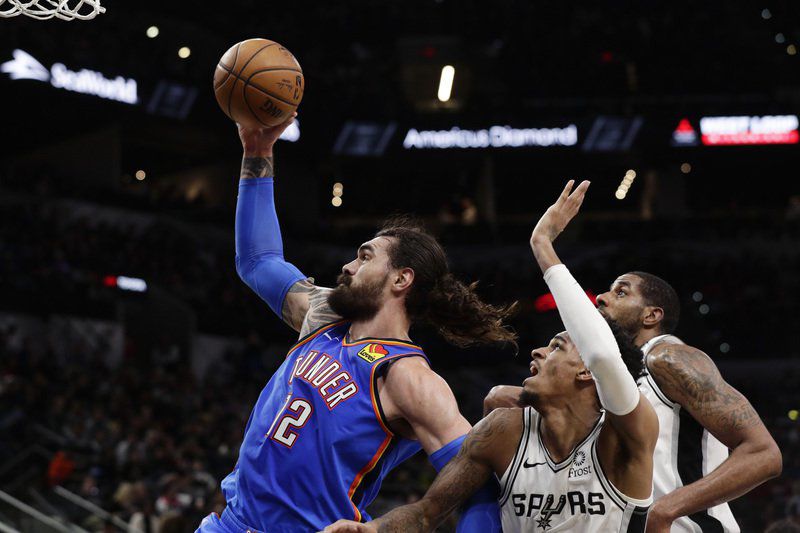 Chris Paul had 10 of his 16 points in the final quarter to help Oklahoma City win its fourth straight.

The Thunder won the battle between the current seventh and eighth seeds in the Western Conference, extending their lead over the Spurs to four games.

Oklahoma City had five players score at least 13 points, including 19 from Dennis Schroder.

The Spurs attempted 10 3-pointers in the first quarter, with Aldridge making his first two attempts and DeRozan and Trey Lyles each hitting their opening attempt.

Gilgeous-Alexander rallied the Thunder with two 3-pointers in the third quarter before they completed the comeback early in the fourth.

Thunder: Oklahoma City’s last victory in San Antonio was Dec. 25, 2014. … Stephen Adams picked up his third foul with 7:20 remaining in the first half but remained in the game. … San Antonio native Andre Roberson has not played since rupturing his left patellar tendon on Jan. 27, 2018, against Detroit. … Oklahoma City is 7-9 on the road this season after finishing 22-19 away from home last season.

Spurs: Aldridge has made a 3-pointer in five straight games, the longest streak of his career. … Jakob Poeltl has 48 blocks this season, the third most of his four-year career. Poeltl’s career high is 100 blocks, which he achieved in 2018 with Toronto. … The Spurs are 10-9 at home this season after finishing 32-9 last season at the AT&T Center.

The Spurs observed a moment of silence in honor of former NBA Commissioner David Stern, who died Wednesday after suffering a brain hemorrhage on Dec. 12. He was 77.

San Antonio coach Gregg Popovich called it a “sad time” in the NBA and extended his condolences to Stern’s wife, Dianne, and their family.

Stern was commissioner for 30 years, guiding the NBA to one its most popular and prosperous times. He also aided in the game’s growth internationally and also helped found the league’s developmental league and the WNBA.

“David Stern was an iconic figure, but that’s quite an understatement,” Popovich said during Thursday’s shootaround. “What he was, was a force of nature, an amazing businessman, leader, manager (and) a man who took over in the mid-’80s as commissioner at a difficult time and was the visionary and the catalyst that made it was it is today. It’s why we are all here and doing well. He started it all”

Thunder: At Cleveland on Saturday night.

Spurs: At Milwaukee on Saturday night.