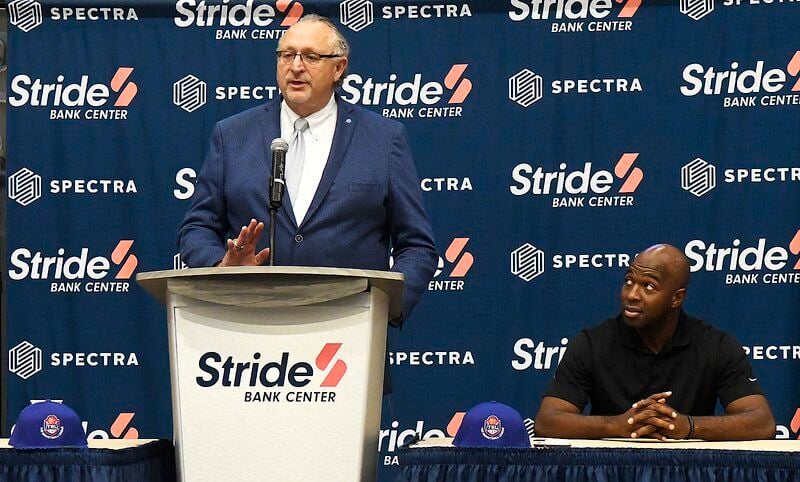 Dave Magley (left), The Basketball League President speaks while Jonathan Reed, owner/president of Enid Outlaws, looks on during a press conference Monday, Sept.r 14, 2020, at the Stride Bank Center announcing an expansion team in Enid that will play in The Basketball League. 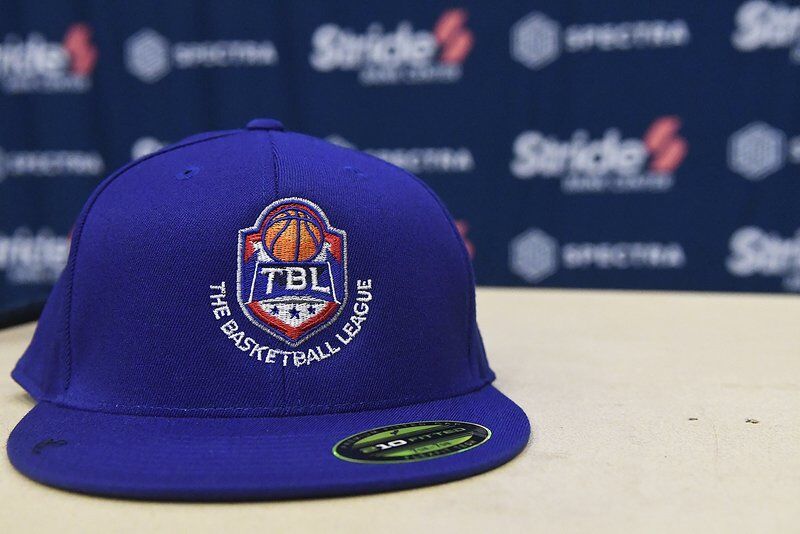 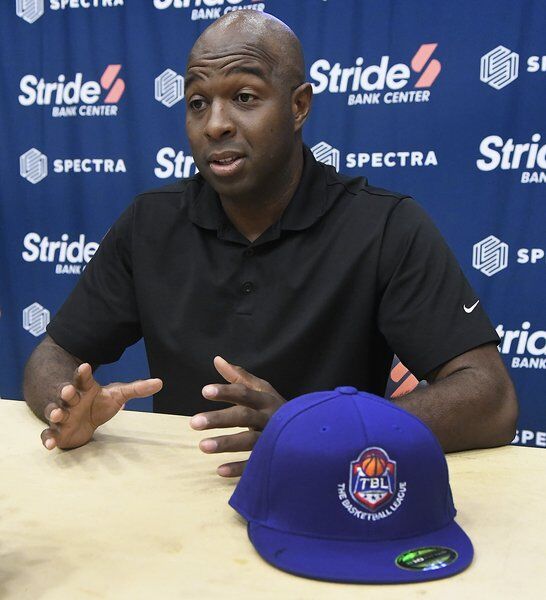 Jonathan Reed, owner/president of Enid Outlaws, answers questions during a press conference Monday, Sept. 14, 2020, at the Stride Bank Center announcing an expansion team in Enid that will play in The Basketball League.

Dave Magley (left), The Basketball League President speaks while Jonathan Reed, owner/president of Enid Outlaws, looks on during a press conference Monday, Sept.r 14, 2020, at the Stride Bank Center announcing an expansion team in Enid that will play in The Basketball League.

Jonathan Reed, owner/president of Enid Outlaws, answers questions during a press conference Monday, Sept. 14, 2020, at the Stride Bank Center announcing an expansion team in Enid that will play in The Basketball League.

ENID, Okla. — Professional basketball is returning to Enid after a 13-year absence.

Dave Magley, the president of The Basketball League, announced Monday the Enid Outlaws are being added to the four-year league, which will run from late February to June. The games will be played at the Stride Bank Center, which he said "will be a flagship of our league."

"There's not a venue in our league better than this," Magley said. "This is the size of town that we need because we're a big deal here. It's something special to bring these kind of players to this market."

Jonathan Reed, who has been involved with various minor leagues, will be the team's owner and president. Brian Jamison, a former Southern Nazarene player, will serve as general manager.

"I feel very confident about this," said Reed, who won a national championship as a player at Cedar Valley Junior College in Lancaster, Texas, and later at Arkansas State. "People don't realize how much there is here in Enid. This (Stride Center) is a big-time place. It's a lot nicer than many of the big-time arenas."

Enid was a member of the United States Basketball League from 1999-2007. NBA legend Kareem Abdul Jabbar led the team to the league championship in 2002.

"This is fantastic for the city," said city manager Jerald Gilbert, who was a season ticket holder for the Storm. "The mayor and the city are 1,000% behind this team. We'll do everything we can to make this successful and support it."'

Kevin Boryczki, Stride Bank Center general manager, said he and Reed "have been on the same page" in negotiating an agreement for the team to play at the center.

"It's going to be a great partnership for the city of Enid," he said. "This facility was truly meant for pro basketball."

The Outlaws will hold a tryout camp in Oklahoma City later this month, followed by another in Enid in October and Tulsa in November. Reed said he hopes to name a coach by the second week of October.

"We want to get Oklahoma guys and guys who have ties to our state first," Reed said about players. "We're looking at several different guys (as coaches) that would fit our theme and give us an exciting product ... somebody who can be fast-paced and someone that knows the style we have."

Reed describes the TBL as "like a track meet ... but we're going to play defense. Some people criticize the NBA because they don't play defense, which they do. We're going to try to come up with a style where we create our offense off of our defense."

Reed has been involved with various semi-pro teams in Oklahoma since 2006. He played in Europe where he doubled as his team's general manager.

"This isn't my first rodeo," he said. "I've done it for quite a while. I'm a show-er. I don't like to talk about what we're going to do. I like to show results and my style, and I hope my team does, too."

As a young player, he once participated on a pickup team that played an exhibition against the Storm in Enid in 2006.

"The Storm had Quannis (ex-Oklahoma Sooner White) and Joe Adkins then. I was just starting out and they needed some guys to play in the game. The crowd and environment was unbelievable. As soon as I started planning this, I thought this (Enid) was an amazing thing that we needed to get done. I think of it as something as giving back and doing something in Oklahoma. This was my first choice."

The league has grown from eight to 12 to up to possibly 32 teams this year. There are three franchises in Texas — Dallas, Lewisville and Waco — and one in Little Rock. Magley said there are one or two "promising" possible franchises in Kansas and another possibility in Nebraska. There are teams as far east as Albany, N.Y., and as far west as San Diego and Fresno, Calif.

The teams will play a 24-game schedule — 12 at home and 12 on the road. Magley hopes to have a schedule by early November.

Magley said he isn't sure how the expanded league will be aligned. There will be a minimum of at least four teams in a pod or division.

Travel will be mostly by bus, but the Outlaws could be making a California trip or Florida trip or an Eastern trip (Albany, Syracuse, N.Y., and Jamestown, N.Y.).

Players' backgrounds range from NCAA Division I to NCAA Division 2 and 3 and the NAIA. Reed said he will go "worldwide" if necessary.

"These guys are hungry," Magley said. "We won't have a bunch of seven-footers, but this will be everything that pro basketball is supposed to be. This is a showcase for our guys. Most of our guys will have a chance to play somewhere else."

"There is so much darn talent in the United States that you can fill up a team with all the parameters and have an entertaining product."

The Basketball League follows NBA rules except for offensive and defensive goaltending, where they follow the FIBA rule of the ball being live once it comes off the rim.

"That makes for a more exciting game," Magley said. "They are more anxious to get to the ball and taking it off the rim."

Tickets will be anywhere from $7 to $8 for student tickets to $10 to $12 for general admission and $25 for courtside seats.

Magley and Reed both emphasize entertainment is a big selling point.

"We want to make it fun," Magley said. "That's where the energy comes from."

Magley said one of the promotions has been a school day game that might tip off at 10 a.m.

"We can fill it up with kids with a message of self-worth and the dangers of drugs and alcohol and the value of education," he said. "Once the kids get sugared up (from concessions), it's a frenzy."

Magley said there will be a line dance for "every kid in the gym" after the third quarter.

"They can kick off their shoes and do some type of shuffle," he said. "You have to be more than basketball. You have to have entertainment."

Jamison said the team's main goal "will be to get to know the community and to embrace the kids ... we have some wonderful athletes that can make a difference in the lives of kids. We want to make sure we're community driven."

Magley said impacting the community is important to the league.

"We look different than most people walking around Enid," he said. "When you have a 6-9 Black guy who has a blond mohawk, you know he is here for a reason.The kids are attracted to that because they are pro athletes. Jonathan is always looking for a chance to impact your kids."

Magley and Jamison have connections with the Price family. Magley, a former University of Kansas player, once played for the Cleveland Cavaliers. He lived in Akron when Mark Price played for the Cavs and worked out with him. Jamison played against Matt Price while at both Putnam City High School and Southern Nazarene. Both said they hoped to get the family involved with the franchise.

Reed said he plans to have a dance troupe, preferably with locals.