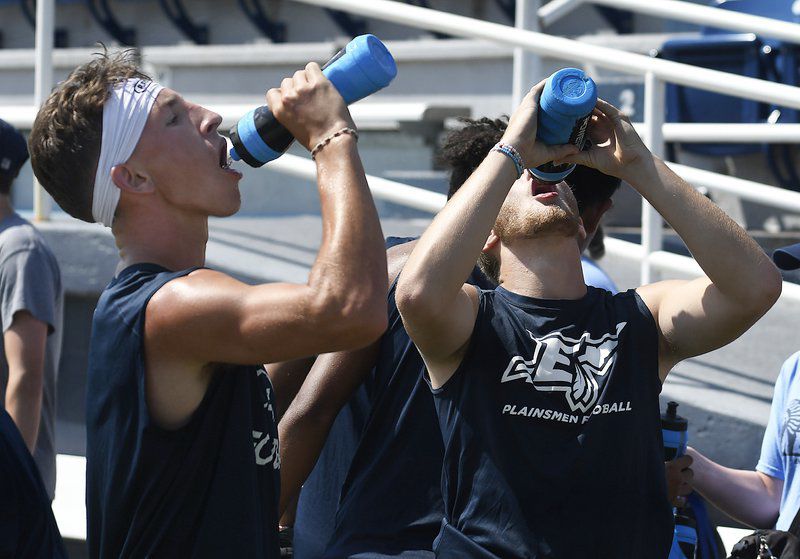 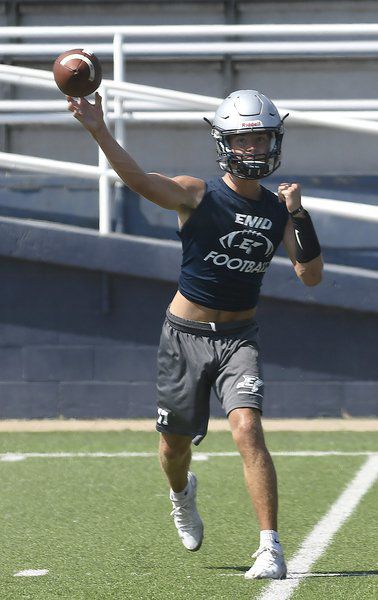 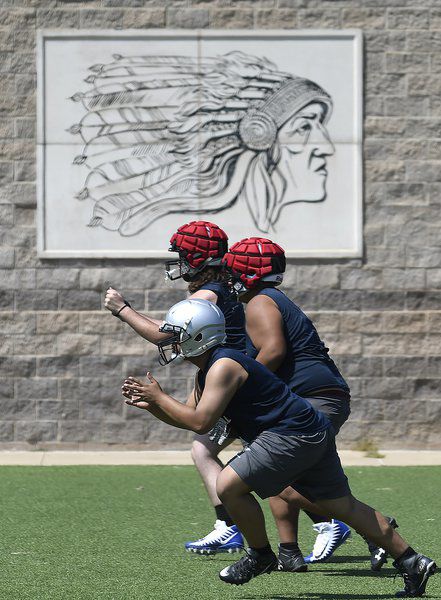 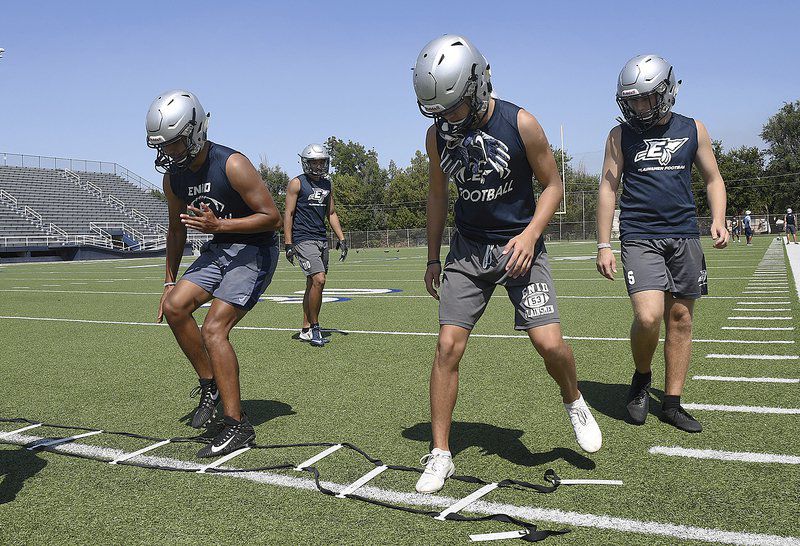 ENID, Okla. — Fall football practice around Enid didn't feel much like fall as temperatures soared into the triple digits.

By the time the Plainsmen took the field for the first day of non-padded fall practice Monday at D. Bruce Selby Stadium, the official temperature was 101 degrees with a heat index of 106. But everybody was prepared.

"It helps that we're not in full pads today," said Enid head athletic trainer Kayla Dickson, who said the team was implementing more and longer water breaks with ice packs and ice towels ready in case of heat-related ailments.

That never became a necessity as the players worked their way through the heat-drenched afternoon on the turf which was estimated to be as hot as 150 degrees. Maybe just as impressively, only one player was noted to lose whatever he ingested for his pre-practice meal.

Early in the practice session, during a water break, Plainsmen head coach Rashaun Woods also took a brief break working with the receivers. "We're excited to be out on the first day," he said. "Just about all of the offense is in, so it's just business as usual, really."

Woods also noted the heat was something the coaches were cognizant of on Monday afternoon. "We're taking the necessary precautions to minimize the effects the best we can," he said.

During one of the breaks, senior lineman Kaleb Stanley, one of the biggest players on the field at 6-2, 325 pounds, was doing his best to cool down.

With a towel draped over his head, sitting on a chair in the shaded doorway outside of the entrance to the locker room, Stanley was asked about the impact of the first day in such conditions.

"It's kind of a mental game right now while the heat's here," he said. He added the toughest thing about Monday was "just getting back into everything. It's a little bit of a change (from Summer Pride)."

During the team portion of the first day of practice, the offense and defense worked on plays being called from the sideline and Woods was pleased with what he saw.

"The guys out there, the ones that have been here in the summer, knew what was going on," Woods said. "That was the goal and I thought we met that goal of just knowing what to do and where to go. It's a good feeling to be able to call the play from the sideline. We were able to send subs in. We could do that. In that regard, we're game ready right now.

"We still need to get in shape and still got to build as a team, but you know we are so much closer than we were in the spring."

Woods looks forward to more players coming out in conjunction with school starting on Tuesday, but that also means the learning curve will be greater for the newer players who did participate over the summer.

"Summer Pride really paid off," he said. "We were able to get a lot of things done and not be slowed down by some of the new guys that showed up (Monday), because the majority of the guys had been there. It made a big difference.

"When school starts (Tuesday), we'll get kids we haven't seen. That's going to slow down — it's going to be hard for those guys to catch up. But right now, the guys that are out there, they know what's going on."

The first day of practice wrapped up just a little over two hours from when it started on the field, with wind sprints cut short by the rumble of thunder. No players were complaining.

"We didn't have any issues from an effort standpoint," Woods said. "Knowing what it's going to take to be successful here, we can never take a day off or think you've got things figured out. But as far as guys doing what we asked them to do, they're doing it."

Non-padded practices continue through Thursday with the pads going on for the first time on Friday. The Plainsmen will have their annual Plainsmen picture day on Saturday and will have an intra-squad scrimmage at 7 p.m. Saturday at D. Bruce Selby Stadium at which the public is invited free of charge.