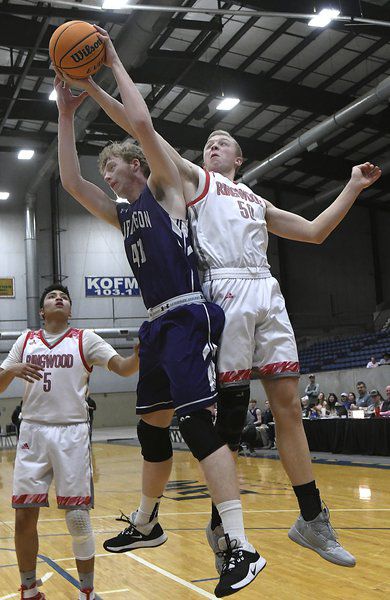 Ringwood’s Aaron Baker and Burlington’s Stanley Klippenstein compete for a rebound during the championship game of the Cherokee Strip Conference Basketball Tournament Saturday, Jan. 25, 2020, at the Chisholm Trail Expo Center. 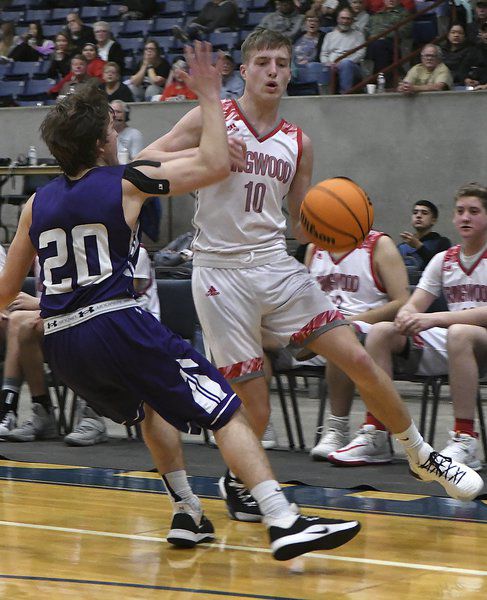 Ringwood's Jacob Briggs drives towards the basket against Burlington's Tateyn Rieger during the championship game of the Cherokee Strip Conference Basketball Tournament Saturday, Jan. 25, 2020, at the Chisholm Trail Expo Center. 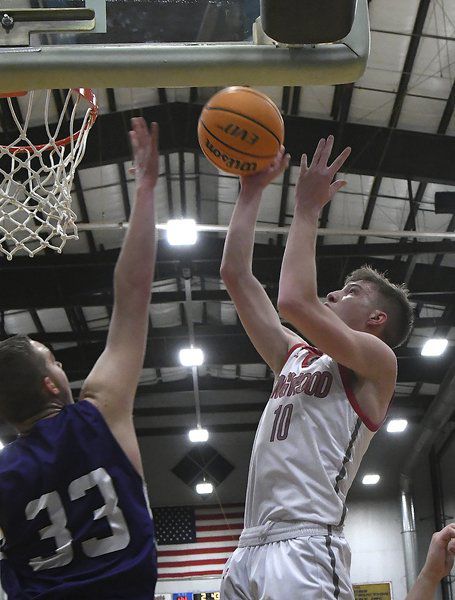 Ringwood’s Aaron Baker and Burlington’s Stanley Klippenstein compete for a rebound during the championship game of the Cherokee Strip Conference Basketball Tournament Saturday, Jan. 25, 2020, at the Chisholm Trail Expo Center.

Ringwood's Jacob Briggs drives towards the basket against Burlington's Tateyn Rieger during the championship game of the Cherokee Strip Conference Basketball Tournament Saturday, Jan. 25, 2020, at the Chisholm Trail Expo Center.

ENID, Okla. — Ringwood put away the memories of back-to-back losses in championship games when the Red Devils blitzed Burlington 68-34 for the boys title at the Cherokee Strip Conference Basketball Tournament at the Chisholm Trail Expo Center Coliseum Saturday.

Tournament MVP Ady Wilson scored 30 points as Lomega’s girls won their fifth straight tournament championship with a 75-43 win over Cherokee. It was the 16th straight win for the Lady Raiders, who are now 19-2 overall.

The Red Devils, 16-3, had four players in double figures — Aaron Baker with 14, tournament MVP Jacob Briggs with 12, Reed Mason with 12 and Luis Aguilar with 11 — in winning their first Cherokee Strip Tournament championship since 2016 when the current seniors were in the eighth grade. Ringwood lost to Cherokee in the 2019 finals and to Timberlake in the 2018 finals.

“We finally got that monkey off our back, and it felt good,’’ said Ringwood coach Nate Pearson. “These boys have a history going back to junior high of getting to a championship game and falling short. Winning this tournament every year is a goal of ours. It was tough this year, just like it always is. My boys don’t care who scores the most points. They play like a team and it showed tonight.’’

Briggs had “about 10 assists’’ to go with his 12 points. Pearson said Briggs demonstrated the team-first motto.

“He can find the open man,’’ Pearson said. “He doesn’t care who scores. He doesn’t have to score the most points to show he’s our best player and our most valuable player.’’

Ringwood is the fourth different boys champion in the last four years (Lomega, 2017; Timberlake, 2018; and Cherokee, 2019). Burlington, seeking its first championship since 2014, dropped to 14-5 with the loss. Preston Paschall had 10 to lead the Elks.

Aguilar joined Briggs on the all-tournament team along with Lake Lyon and Kade Chace of Cherokee, Paschall and Noah Snowden of Lomega.

Ringwood led 13-7 after the first period and 29-18 at halftime, but made the game a rout in the second half outscoring Burlington, 24-10 in the third period and 15-6 in the fourth.

“Our defense made the difference,’’ Pearson said. “We talked about the game that defense would be the key and our offense will come. We got enough tonight.’’

Wilson hit nine three-pointers, including six in the second half, to pace a well-balanced Lady Raider attack which saw three others score in double figures — Emma Duffy with 15, Darci Roberts with 10 and Syndi Walker with 10.

Duffy had 10 of her points in the first quarter in leading the Lady Raiders to a 19-11 lead. Freshmen Roberts and Walker were just as effective passing the ball.

“She got going pretty good in the second half,’’ said Lomega coach Kevin Lewallen. “When she gets hot, she’s hard to guard. There’s one thing about this group — they don’t care who scores. You can’t key on one person, because they all can shoot. It makes everybody else better because it’s hard to guard everybody.’’

Cherokee’s Gracie Leslie had a strong game in defeat in 21 points.

“The Leslie girl played really well,’’ Lewallen said. “We had a hard time guarding her. I didn’t think we played that great early, but midway through the second quarter and the third quarter, we did a really good job.’’

Wilson was joined on the all-tournament team by Duffy, Walker, Leslie, Lizzy Webster of Cherokee and Emma Watkins of Kremlin-Hillsdale.

Cherokee outscored Lomega, 11-5 in overtime to beat the Raiders, 61-55 in the boys’ third-place game. The Chiefs (11-5) forced the overtime with an 12-6 surge in the fourth period to overcome a 44-38 third quarter deficit. Chace led the Cherokee attack with 26 points, followed by Lyon with 21 and Gabe Wyatt with 10. Lomega (14-7) was led by Noah Snowden with 21 and Blake Snowden with 14.

Watkins scored 10 points as Kremlin-Hillsdale used a strong start and finish to upset Burlington, 38-28 in the girls’ third-place game. The Lady Broncs (7-10) jumped out to a 10-2 lead after the first quarter. Burlington (13-6) cut the led to 22-21 after three periods, only to be outscored 16-7 in the final quarter. Burlington was playing without three-year starter Kayla Highfill. Anna Motycka and Karlie Heatherman both had 10 points for the Lady Elks.

Preston Pierce scored 17 of his game-high 22 points in the first half in leading Timberlake (10-6) past Kremlin-Hillsdale (6-11), 63-47 in the boys consolation finals. Pierce had four of Timberlake’s 11 three-point baskets. Devon Kent had 15 points and three treys. Caden Russell (19) and Harris Keithly (14) paced the Broncs’ attack.

Pazlie Jones scored 13 points as Ringwood beat Timberlake, 33-19 in the girls’ consolation finals. It was the fewest points the Lady Devils had allowed this season. Ringwood blew the game open with a 14-3 third quarter spurt to go up 25-13. Samantha Phillips led Timberlake (4-13) with seven points.

ENID - Celebration of Life Service for Wilbur M. Schneider, age 100, of Enid, are pending with Ladusau-Evans Funeral Home. He passed away Thursday, Feb 27, 2020.