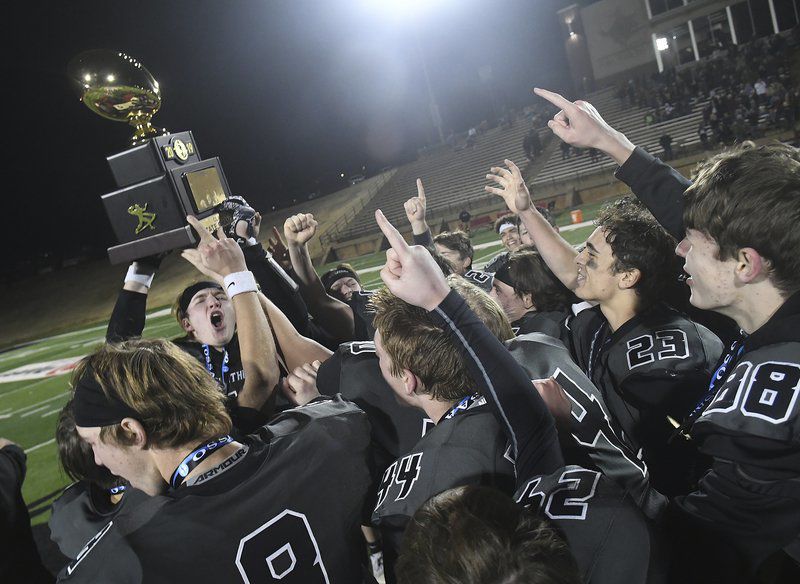 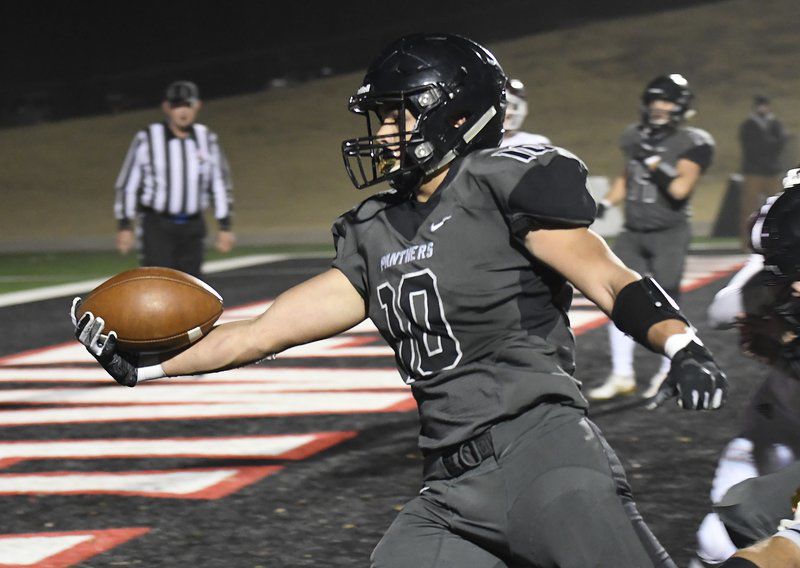 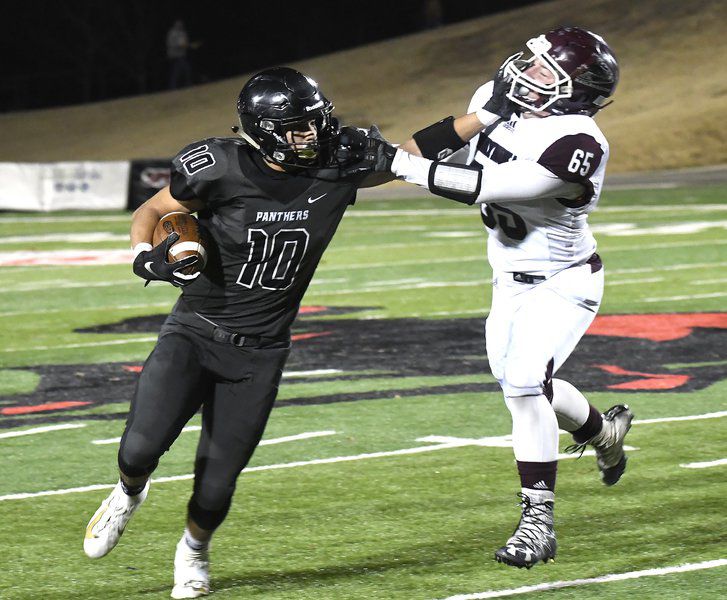 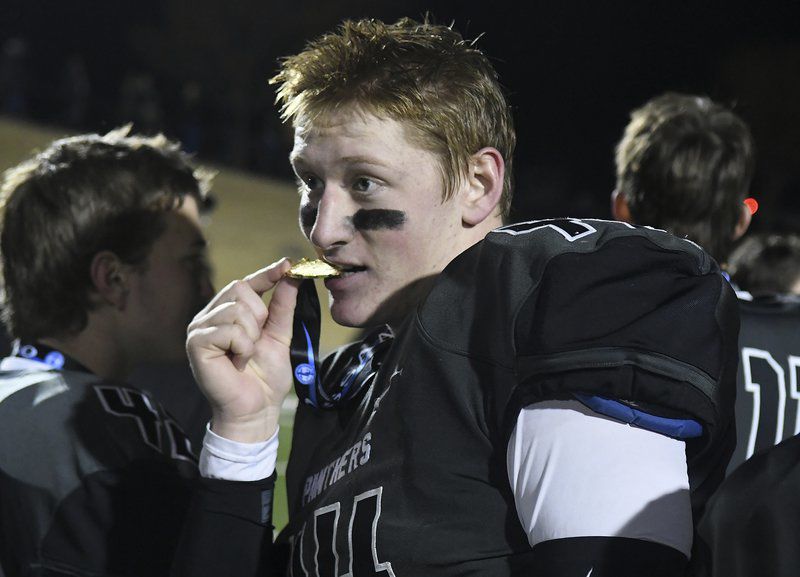 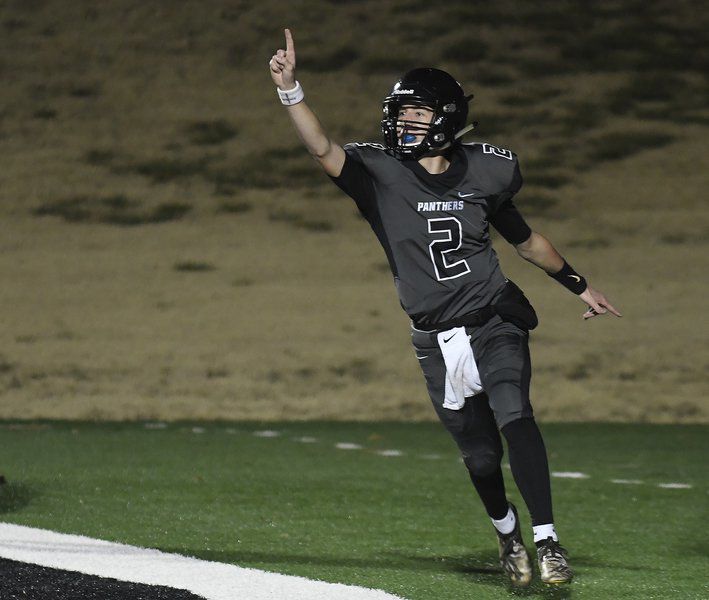 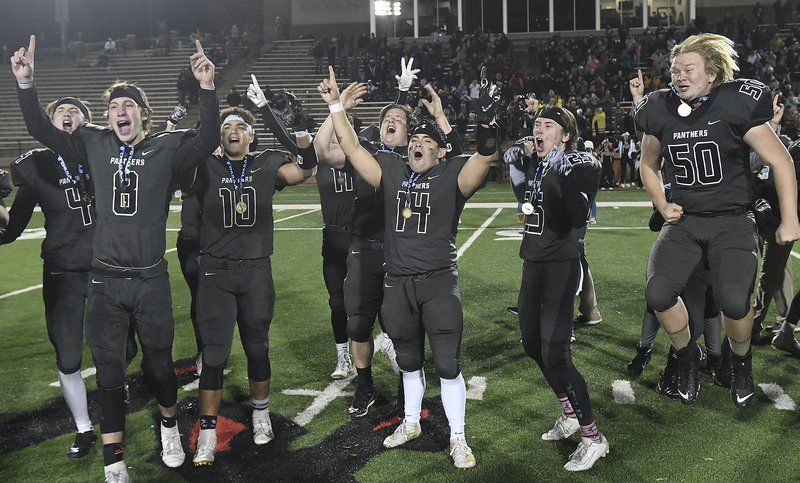 ALVA — After scoring a two-point conversion on the last play of the Class C state championship game, Pond Creek-Hunter senior running back Noah Miller dropped to his knees.

In the back corner of the end zone at Ranger Field, Miller’s emotions washed over him as the reality set in that the Pond Creek-Hunter Panthers are Class C state champions.

“We finally made it happen,” Miller said.

The Panthers completed their perfect 14-0 season with a 54-8 defeat of Waynoka (10-4) Friday night at Northwest Oklahoma State University.

“I was just overcome with emotion,” Miller said, still beaming with emotion following the game. “I didn’t know what to do with myself, so I dropped to my knees and thanked the Lord.”

Miller and his senior teammates closed out their Pond Creek-Hunter football careers with a state championship, the Panthers’ first title since 2002. The senior class also closed out their careers by recording a program-high 51 wins.

All year, senior lineman Xavier Smith told everyone the Panthers were going to go undefeated and win a state title.

The Panthers went “100 percent” in practice, every practice. They studied game film religiously and put in countless hours of preparation to move them one step closer to their ultimate goal: a championship.

Senior quarterback Jake Ronck said the Panthers put in even more time this past week to prepare for Waynoka. As soon as Pond Creek-Hunter’s 40-point semifinal win over Timberlake ended last week, the Panthers went right to work, starting with a game film session the following Sunday.

“This has been the longest week of my life with how long we prepared,” Ronck said.

Every team wants to end their season with a state championship. Winning it all is what drives teams across the state. But the Panthers were driven by something more than a simple desire to win. They were driven by their fatigue of coming up short.

“We’ve been heartbroken so many times,” Smith said.

The Panthers suffered devastating losses to Tipton the last three seasons with two of those season-ending defeats coming in the state championship game.

“I was just tired of getting beat,” Smith said. “And people saying we can’t finish games or finish out the season and win.”

Pond Creek-Hunter was locked-in and Friday night’s 46-point win was proof. After Waynoka tied the game at 8-8 in the second quarter, Pond Creek’s offense finally “clicked” Miller said. The Panthers scored 22 unanswered points to close out the first half, thanks to touchdown runs from Miller and Ronck.

The senior quarterback also dropped a 20-yard touchdown pass to junior John Theophilus to give Pond Creek-Hunter a 30-8 halftime lead.

“This is a team that’s been focused all year,” Ronck said. “Watching extra film, doing what we can in practice — it doesn’t matter if we went 20 hours in practice, this team was going to do it.”

The Panthers’ defense kept the Railroaders under 200 total yards and picked off quarterback Cason Olson four times. After halftime, Olson and the Railroaders' offense marched downfield near the red-zone. But on a quarterback run, Olson was stripped by Smith and the Panther lineman returned the fumble 76 yards for a touchdown.

“It’s a tough way to lose a ballgame,” Cline said. “We had a lot of adversity this year, but these seniors showed the community and these younger classmen how to do it. Hopefully, this becomes a tradition here, where we can continue to make the playoffs and make a deep run.”

Cline said Waynoka’s deep run was thanks to his seniors' play, something Kerr could attest to as well.

“You hate for hard work to go unnoticed,” Kerr said. “And these guys have worked extremely hard, and I’m extremely proud of them.”

Both Waynoka and Pond Creek-Hunter had plenty of support on Friday night, with both sides of Ranger Field nearly filled to the brim with fans and community members.

Even before he came to Pond Creek-Hunter, Kerr was well aware of the Panther faithful’s support.

ENID - The Services Celebrating and Honoring the life of Brett Lucas, 66, of Enid, will be held privately. Condolences and special memories may be shared with the family online at WWW.Brown-Cummings.com

ENID - The Services Celebrating and Honoring the life of Walt Cornwell, 75, of Enid, will be held privately. Condolences and special memories may be shared with the family online at WWW.Brown-Cummings.com