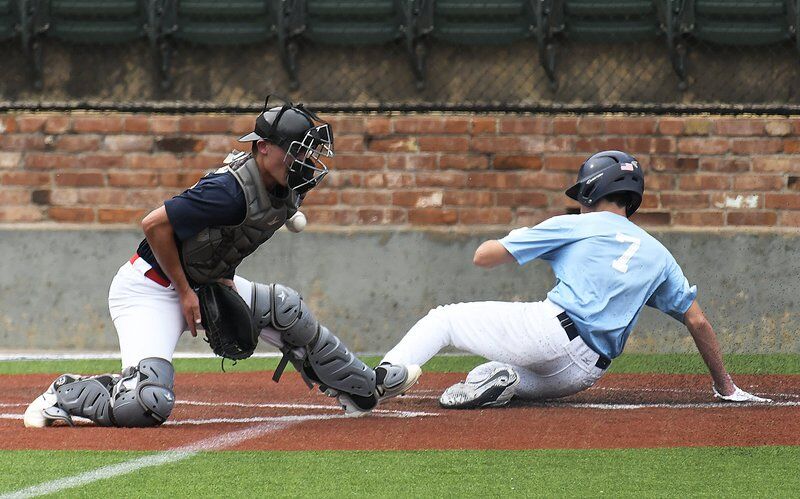 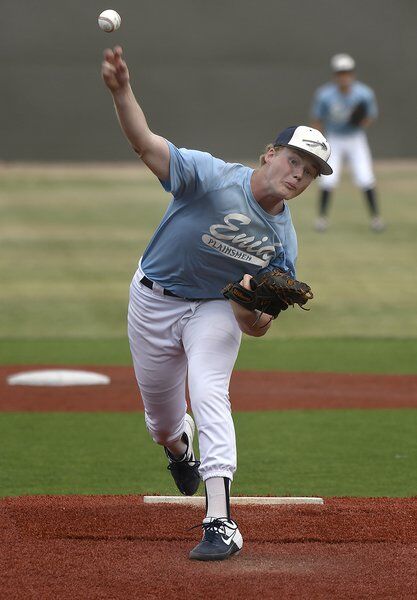 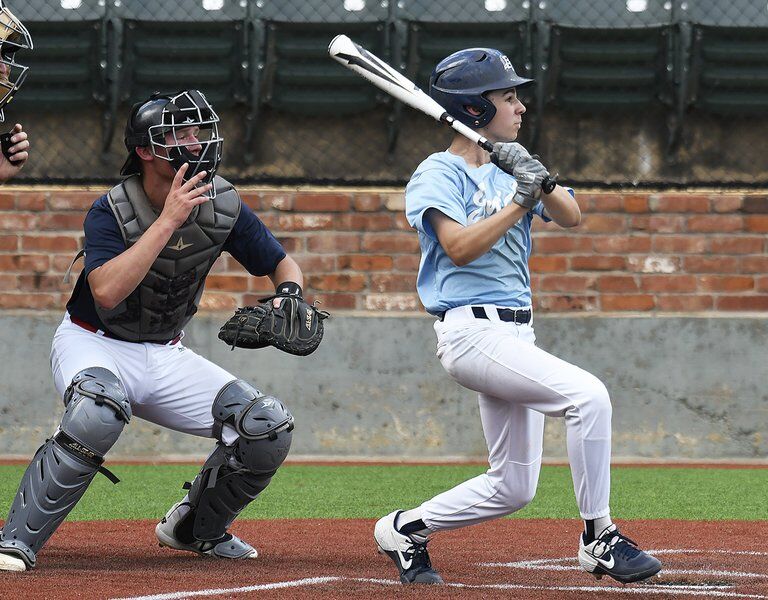 ENID, Okla. — Enid Plainsmen head coach Brad Gore joked a little about stranding 15 runners on base in a 6-5 extra inning win over the Oklahoma (formerly Woodward) Travelers on the final day of the Oklahoma Shootout Thursday at David Allen Memorial Ballpark.

“Everybody says you left on a small village,’’ Gore said. “We were saying we left a small city on base today. We need to get some timely hits.’’

Garrett Brooks and Maddux Mayberry gave the Plainsmen those timely hits in the eighth.

With one out, Brooks singled. Courtesy runner Brock Slater advanced to third on back-to-back passed balls. Mayberry brought him home on a hard grounder to second for only Enid’s sixth hit of the day.

“We put ourselves in a good situation at the end," Mayberry said. “We filled it up and I was able to hit a hard ground ball. I was just trying to hit a hard grounder to score the guy at third. I just wanted to make sure that I hit the ball hard on the ground. I was definitely looking to hit it in the opposite field.’’

The hit made a winner of sophomore-to-be pitcher Bill Humphrey, who pitched a scoreless eighth inning, thanks to the heroics of left fielder Jake McCool.

The Travelers’ Kyler Procter, with one out, hit a double to left center. David Garcia followed with a long fly ball that Gore — at first sight — thought was going to be a two-run homer.

However, McCool — with his back to the wall — jumped to catch the ball, leaving Procter at third. Conner Thompson grounded out to set up the bottom of the eighth heroics.

“That was a big-time play out there,’’ Gore said. “I thought it was going to be out, but Jake jumped up there and made a great play. Coach (Dennom) Sullivan has done a lot of work with our outfielders. They all made some good plays out there. Our defense has been good this week.’’

McCool “thought for a little bit’’ the ball might be out, but was aided by center fielder Mayberry in judging where the ball was.

“It was pretty exhilarating,’’ he said. “I was going back and Maddux was out there saying ‘Wall, wall’ and I went up and made the catch. My teammates were telling me where the wall was and I made the catch. I’m used to playing the wall now.’’

McCool was two-for-three at the plate with two walks. He drove in Enid’s first run in the first on a bloop single that scored Kade Goeke, who had walked. He doubled in the sixth and scored after a sacrifice by Mayberry and a throwing error on a grounder by Blake Priest.

The latter gave Enid a 5-4 lead but the Travelers tied it in the seventh when Tager Conary reached on an error and scored on a two-out single by Luke Jestis. Jestis went to second on a walk to Parker Ward, but Jake Kennedy struck out Brady Benedict to end the threat.

Enid starter Tyler Holland allowed only three hits and one walk while striking out one over four innings.

Kennedy gave up four runs over his three innings, while walking three and hitting a batter. Kennedy walked two in the fifth, both of whom scored on a two-RBI single by Ward to tie the game at 3-3. Ward was thrown out going to second.

Kennedy threw three wild pitches after walking Josh Smith in the sixth to tie the game at 4-4.

The Travelers had tied the game at 1-1 in the second when Garcia doubled home Procter. Enid answered back in the third when Kennedy was hit by a pitch, stole second and scored on a delayed double steal.

Gore felt Holland set the tone for the game with his performance.

“When he started off, he didn’t have his breaking ball,’’ Gore said, “but once he found it, they had a tough time doing anything against him. He threw all three of his pitches for strikes. I’m proud of him. Jake struggled a bit with his command and then found it. It’s just trial-and-error right now. The guys have to work their way through this and get where they want to be. We did stay in there and fought hard against a good team.’’

Gore had hoped to use Humphrey in regulation, but held back because of a large number of right-handed hitters in the Travelers lineup.

Humphrey did come in after Kennedy exceeded his pitch count.

“I’m comfortable with both of those guys,’’ Gore said. “Humphrey threw strikes. That was good to see.’’

The Plainsmen left the bases loaded in the third and fifth and two on in the first, second, fourth and sixth.

“We’re still getting our timing down and doing this and that,’’ Gore said.

“It was a good battle,’’ Mayberry said. “I think we are getting better every game. We’re getting back to rhythm. We just need to get back in shape.’’

Enid went 3-1 in the four-day tournament.

“I think we’re doing pretty well,’’ McCool said. “We’re going to try to win as many games as we can.’’

The Plainsmen are back in action Tuesday at Kingfisher.