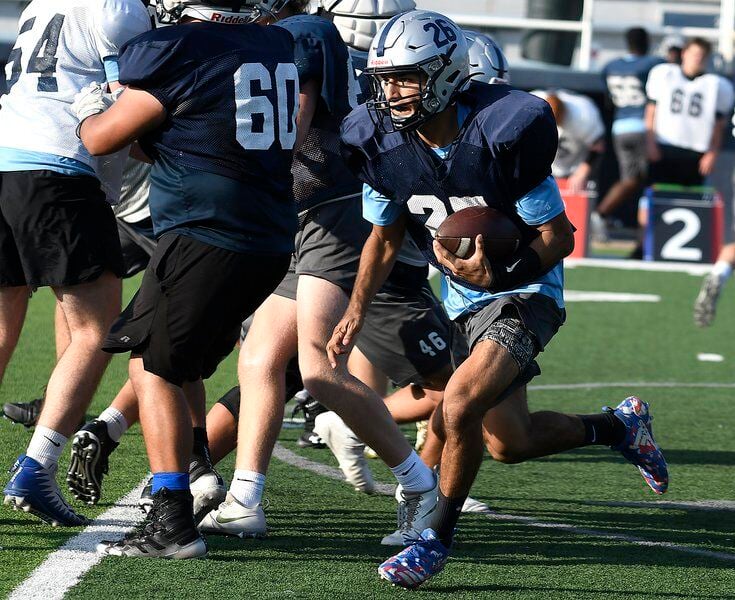 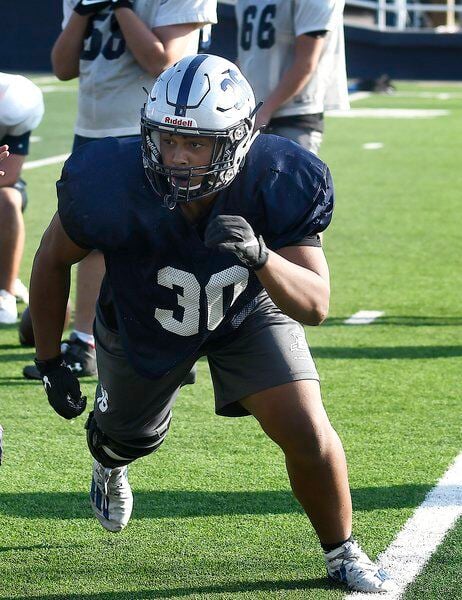 ENID, Okla. — It wasn't a win, but last week's 42-24 loss to Yukon could certainly be considered another step for the Enid Plainsmen football program in achieving what was clearly lacking in last season's 0-10 campaign: The ability to compete against 6A1 competition. It has been a point of focus for second-year Enid head coach Rashaun Woods.

"Things are definitely changing and I've said that all year," Woods said on Wednesday. "It's just going to take time. The guys are bigger, faster, stronger and they understand what we're trying to do. They gave us an opportunity to compete in last week's game."

Competing was something the Plainsmen did little of in last year's 0-10 campaign, being outscored 391-45 in its seven district games, including 61-7 by Yukon.

The difference in this year's Plainsmen (2-2. 0-1) has been noticeable and Enid is anxious to show the home fans the progress it has made when it finally gets to host a home game when it welcomes Westmoore at 7 p.m. Friday to D. Bruce Selby Stadium for homecoming.

Enid fell behind 14-0 to Yukon in the first quarter last week, but quickly rallied to cut it to 14-10. Last year, the game would have been over after spotting Yukon a quick 14 points.

"They jumped out on us early and the guys didn't panic," Woods said. "We were able to have things our way and we drove down and put points on the board. Once we were able to do that, we figured out, hey, we can compete. Then it was a ballgame at that point."

The Plainsmen could have potentially taken the lead on a couple of occasions if not for some miscues.

"We need to limit the biggest mistakes," Woods said. "We had a chance on first-and-goal from the 3-yard line to make it 14-7 but we ended up with three points. I felt that was a big mistake and then fourth-and-a-half-yard inside the 30, getting ready to score again, we didn't get that opportunity because we put the ball on the ground. We could have had 21 points before halftime. That was a turning point as far as being down only by a touchdown as opposed to 17."

Johnny Villa continued his fine season at running back, rushing for 116 yards and a pair of touchdowns, giving him 391 yards this season, averaging 5.4 yards per carry. Hunter Filarski had his best game out of the backfield, rushing for 82 yards on 10 carries.

Quarterback Blake Priest passed for 122 yards, including a 49-yard touchdown pass to Cam Mathis late in the contest. Wide receiver Tykie Andrews continues to be a dynamic playmaker and hauled in a team-high six catches for 84 yards.

But Woods said the team was not completely satisfied at the end of last week's game.

"They worked hard and really wanted to win the game," he said. "They're not happy that we didn't win, but from a competition standpoint, they feel comfortable with what we're doing and confident in the plan and the coaching staff. That's the first step of getting this deal back on track."

A win Friday against Westmoore would be a huge step.

The Plainsmen have not won a district game since defeating Putnam City West 49-42 in double overtime in 2017 when Enid was in Class 6A2. In that game, Enid pulled off an improbable comeback, rallying from a 35-point fourth quarter deficit to tie the game and send it into overtime.

"It's been a long time since we have been able to compete at this level," Woods said. "We had a chance to win the game last week. I am not talking about past 6A2 teams, we're talking about the best schools in the state. It's just a different situation. ... At one point it didn't seem likely we could compete with the likes of those schools, but now we are just right there. If nothing else, the improvement is evident and it seems like a possibility. It seems tangible now. That makes the kids and the coaching staff excited."

Enid was down a couple of key players on defense last week, including one of its top defensive players, Donovan Rieman. Woods said he is hopeful to have him back this week.

"We took precautions with a couple of guys," he said. "Being at full strength may have given us a better chance to win. That's how it rolls. It's still a team sport. The guy who really stepped up and did the best he could and did well for us was Romello Washington."

Westmoore comes into Enid after a 69-14 loss to Edmond Santa Fe on Saturday. It was the first game for the Jaguars (2-2, 0-1) after a two-week layoff due to COVID-19. Santa Fe held Westmoore to 55 yards rushing on 27 tries. However, Woods cautioned the Jaguars' loss to the Wolves is not all that it seems and shouldn't give Enid false confidence.

The Jaguars shut down Enid 54-0 last year in a game that was played with a running clock in the fourth quarter.

"Make no mistake, they've got guys all over the field that can run, that are physical and strong," Woods said. "They are a team that got after us like everybody else. They beat us really bad last year. They were on the cusp of being a playoff team. It's going to be a tough challenge."

Senior quarterback Dayton Wolfe has already passed for 963 yards and nine touchdowns this season for the Jaguars. Wolfe had 264 yards passing and three touchdowns in last season's win over Enid.

Still, Woods sees Friday's game as another potential marker in Enid's steep climb back to respectability.

"Considering we had an opportunity last week against Yukon, who is No. 4 in 6A1, going into the fourth quarter down 28-17, having a chance and just coming up short, yeah, it's a clear reason to think we can break the (district losing) streak. So, that is definitely the goal."

Friday's game can be heard on KCRC (1390 AM) and viewed on Channel 19 for Suddenlink subscribers.