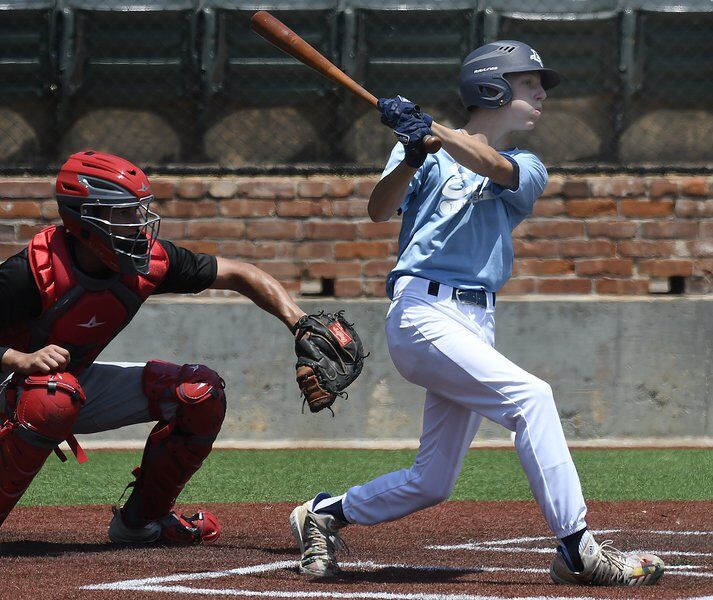 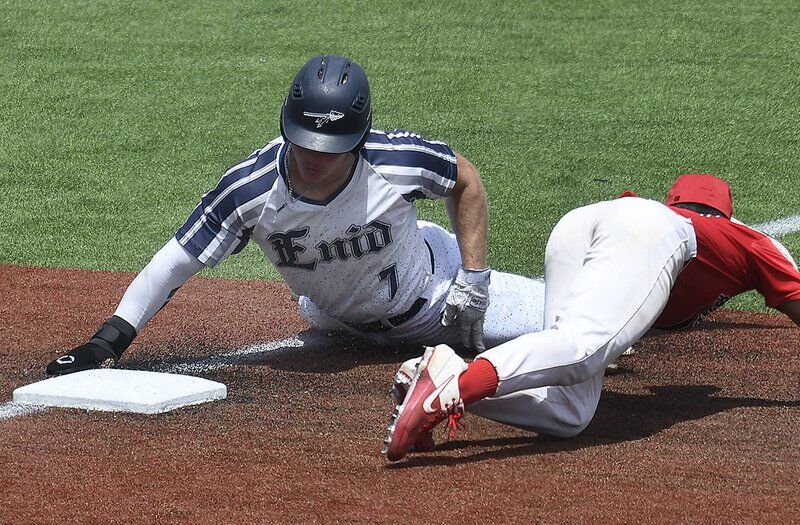 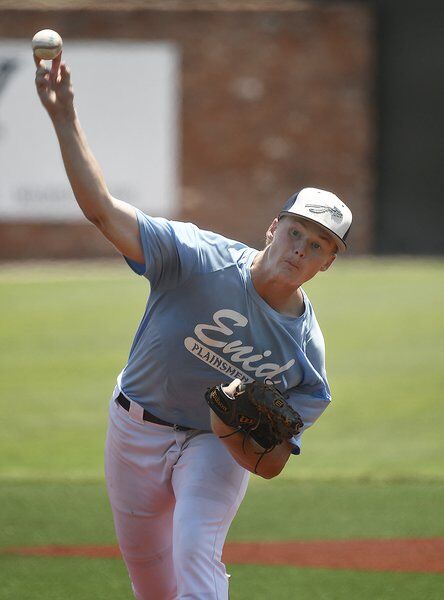 The Plainsmen face the OK Drillers at 5 p.m. Thursday, followed by the Majors against the Woodward Travelers at 7:30 p.m.

Priest struggled early for the Plainsmen as he walked two batters and hit another in the first four batters he faced. He struck out Clayton Abercrombie and Gabe Williams to end the inning.

Priest, though, walked only one in his last four innings of work. He allowed four hits, but did not allow a runner to get past second and struck out five more. Holland retired all six batters he faced with two strikeouts after coming in the sixth.

“We threw the ball really well,’’ said Plainsmen coach Brad Gore. “Both pitchers threw a lot of strikes and we played really good defense (no errors). That’s our formula for winning games.’’

Priest, who had struggled with control at last week’s regional tournament, shook off the bad start.

“That’s a sign of maturity,’’ Gore said. “Both of them gave us just what we wanted.’’

Priest was one pitch over (71) the pitch limit Gore had set for him.

Priest said controlling his slider was the key to the turnaround.

“After I start throwing it for strikes, I had them on their heels,’’ he said. “I just made a big adjustment. After that, they couldn’t touch anything that I threw. They couldn’t touch my fastball. My confidence was growing as the game went on. It’s always fun to start off a tournament on a high note like this.’’

Holland was effective with his curve ball and fastball.

“Just being able to throw my curve for a strike was big,’’ Holland said. “You can’t throw fastballs all the time. My two-seamer was going good.’’

Center fielder Reese Slater ran down two long balls back-to-back in the sixth. He ran to the center field wall to nab a shot by designated hitter Gabe Williams.

“Reese made a great play,’’ Gore said. “He made some tough plays against Woodward Saturday. Our kids are improving every time out.’’

The Plainsmen made the most of only four hits.

The Plainsmen were aggressive on the bases in scoring twice in the fifth. Slater walked, stole second and third and scored on a single by Goeke. Goeke went to second on the play and scored when catcher Matt Milner threw wildly when he stole third.

“We have to create runs with these wood bats,’’ Gore said. “You can’t sit back and wait for the big inning. We got to get things on the move. We got a little team speed and we took advantage of it to put pressure on the defense. We got a couple of timely hits when we needed them and that’s what will win you some games.’’

The Majors scored six runs in the bottom of the sixth to end the game on the run rule. Four runs came off wild pitches and Titan Stephens ended the game with a bases-loaded RBI single to give him three for the day.

Every Majors starter scored at least once.

Crull scored three runs — twice scoring from second on a wild pitch. He had an RBI double in the second, an sac fly for an RBI in the fourth and another RBI on a fielder’s choice in the sixth.

“He can flat out run,’’ said Majors coach Kris Webb about Crull, a recent Bixby High graduate. “His instincts are really good. He wants to win and he wants to compete and he loves to play baseball. He showed that today.’’

Crull joined the team at mid-season at the invitation of shortstop Conner Gore, who he will room with at Oklahoma State in the fall. Crull couldn’t remember if he ever scored twice from second on a wild pitch before.

“I just kept running today,’’ he said. “They got a little lazy on the mound and I took advantage of it. This season has been a blast. I love going after extra bases and putting pressure on the defense.’’

Stephens, who had struggled in the regional, had his stroke back. He was three-for-three with an RBI double in the second, an RBI single in the fifth and game-ending RBI in the sixth. He could have had two more RBI had that not ended the game on the run-rule.

“It felt better today,’’ Stephens said. “I worked on my swing in the cage and that helped a lot. I didn’t hit well last week, but you have to keep grinding and I figured it out today.’’

Braeden Moreland, who came into the game in the top of the fourth with the game tied 4-4, threw three shutout innings of relief to get the win. He gave up one hit while walking two and striking out two. The Majors, who committed three errors in the first three innings behind starter Kasen Jackson, played errorless defense behind Moreland.

“I was throwing a lot of strikes and my defense was backing me up,’’ Moreland said. “You have to give them a lot of credit. They were putting the ball in play and the defense was right there to make the plays.’’

“Braeden came in and threw strikes,’’ Webb said. “That’s what we expect him to do from now on.’’

Bryce Madron, Will Fleece and Blake Scott had doubles while Dom Johnson had an RBI triple. Conner Gore was two-for-three.

Webb was a little disappointed not to play the seventh since he had planned to use OCS grad Jacob Bookout to close out the game.

No games due to All-State games