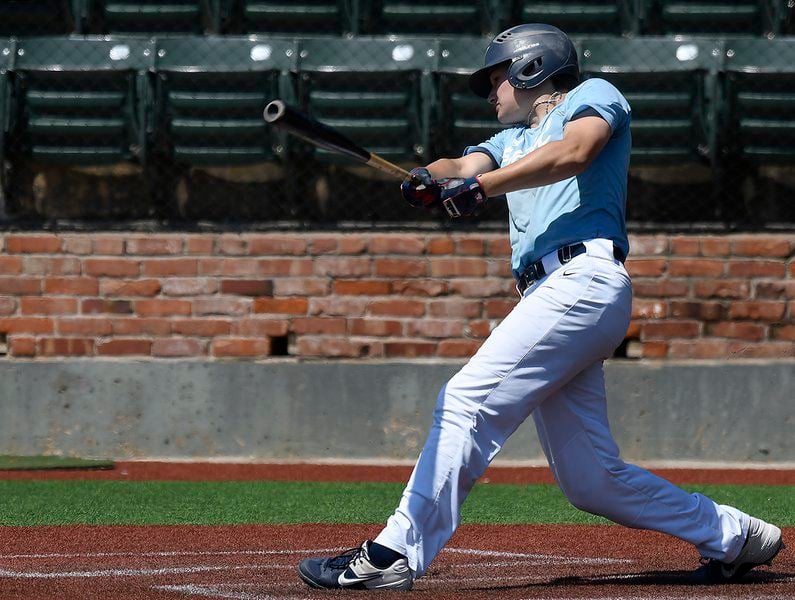 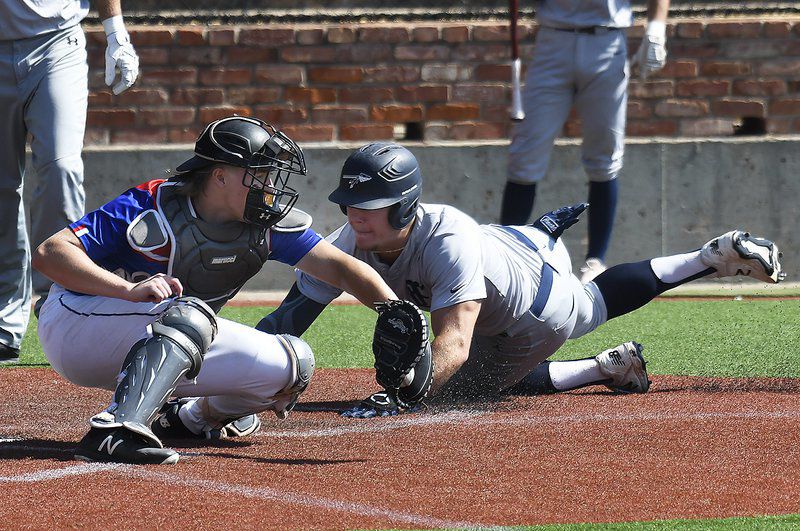 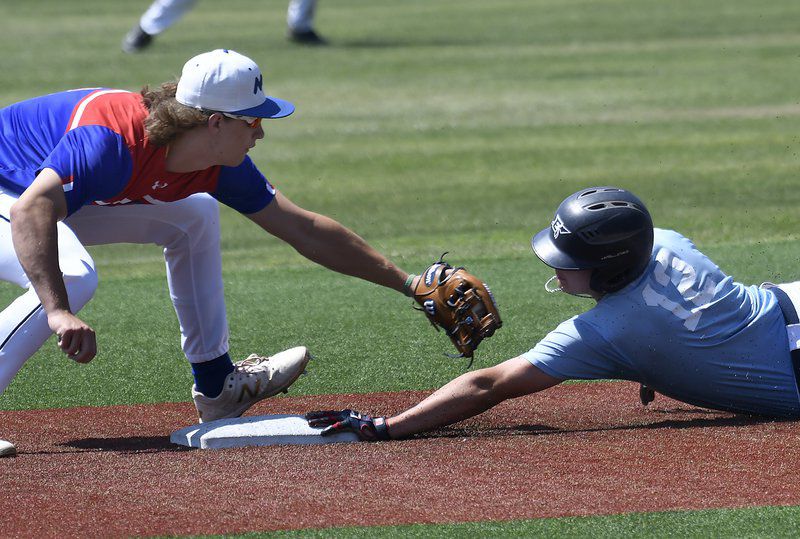 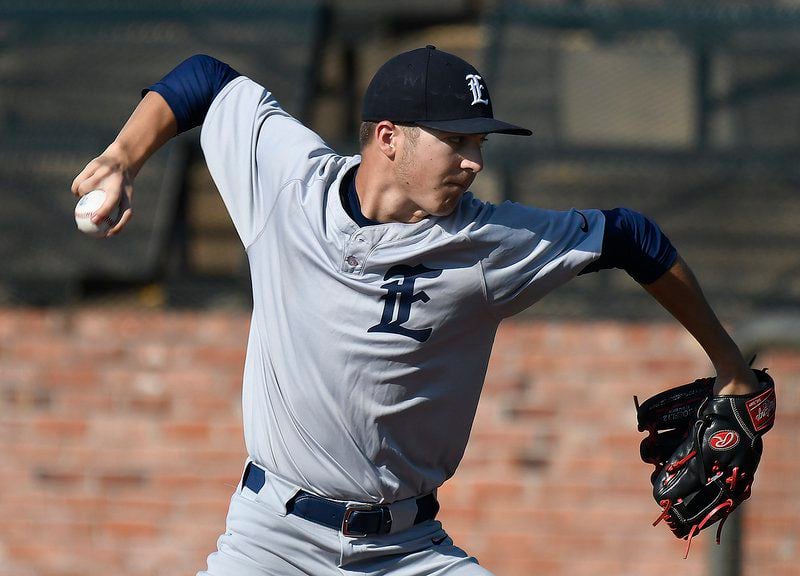 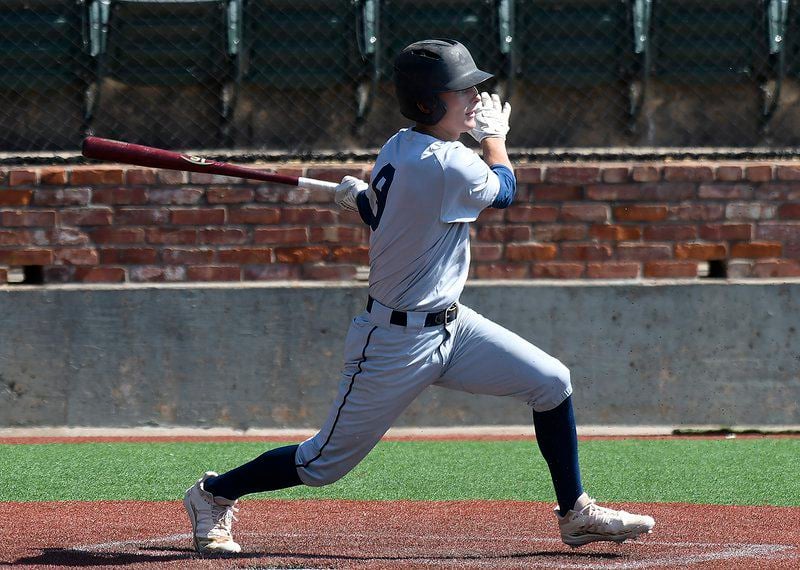 Wood bats can be an even better friend for a pitcher than the double play.

That was evident in the first two games of the Connie Mack regional qualifier Wednesday at David Allen Memorial Ballpark in which teams were using wood bats for the first time this season.

In the opener, Enid Majors’ Braeden Moreland allowed only three hits over five innings while striking out six and walking one in shutting out MVP Heath, 6-0 in a game stopped after six innings because of time limit. Tate Taylor, who was three-for-four at the plate, retired all three batters he faced in the sixth with a strikeout.

Moreland, an Elgin High School senior-to-be, allowed only one runner to third. His shutout was saved in the third when left fielder Piercen McElyea threw out Colin Dake at home while trying to score from second on a single by Cole Besater.

“I felt pretty good,’’ Moreland said, who was making his first start of the summer said. “I got the job done. I just tried to throw strikes and maybe get some strikeouts. I wanted them to hit the ball and make outs and not let them score.’’

Moreland said he accomplished his goals for the game.

Majors coach Kris Webb was not surprised either.

Moreland was effective with his offspeed stuff. He was pleased with his fastball but wished he had gotten more velocity

“But the offspeed stuff was working pretty good,’’ he said.

Webb’s lone disappointment was that Moreland had to throw more pitches than he wanted him to do.

“Some of the guys were fouling some pitches off,’’ Webb said. “I would like to see him develop more of a killer mentality, but he gave me five good innings and I will take that every day.’’

Moreland, despite a two-and-a-half- to three-hour trip from his native Elgin, wants to be here for as many games as possible.

The Majors broke a scoreless tie in the fourth with two runs. Blake Scott walked and went to third on a double by Chase McCracken. Taylor singled home Scott, and McCracken came home on a ground out by Will Fleece.

Titan Stephens, who was two-for-four, led off the fifth with a double, went to third on a single by Scott and scored on a delayed steal of home as Scott took second.

Enid added three runs in the sixth. Connor Gore singled and scored on a double by Drake Kerr. Stephens singled in Kerr and scored his second run of the game on a single by Taylor.

“Titan can hit, we all know that,’’ Webb said. “Everybody got to hit today. We know how different the wood bats are. We will be getting into it better by the end of the week. We got some good hits.’’

Payne Mega of defending state champion MVP Seng (18) fired a one-hitter in an 8-0 run-rule victory over the Enid Plainsmen. He struck out six and did not walk a batter in facing only one batter over the minimum. The Plainsmen did not get a runner past first.

Jake McCool’s two-out single in the first was the lone hit off Norman High star Mega, who is headed to Southern Nazarene. McCool was thrown out trying to steal second. Reese Slater was the Plainsmen’s only other base runner, reaching on an error in the third.

“He was all right,’’ said Plainsmen right fielder Maddux Mayberry of Mega. “We made him look better than he was.’’

“Mega filled it up,’’ said Enid coach Brad Gore. “We didn’t have a good approach at the plate. The wood bats make the game different.’’

Mega was able to keep the Plainsmen off balance by effectively changing speeds.

Dallas Goodpasture took the loss for the Plainsmen, allowing five runs and five hits in two innings. He struck out two and walked two.

Shattuck’s John Bay hit a shot over the left field wall in the fourth. Landry Kyle, who was three-for-three, turned a misplayed fly ball into an inside-the-park homer in the next at-bat.

“The only thing I was disappointed in was our defense,’’ Gore said. “It was shaky. We didn’t play our best today. They have a good group of guys. One through nine all can do damage and if you make a couple of mistakes they are going to get a couple of hits and put a crooked number on the board. We have to do better on defense and swing the bat better.’’

MVP Seng scored five runs in the second with the big blows being two-RBI doubles by Cade Lott and Racer Felter and a sac fly RBI by Jett Lodes.

“We played a pretty clean game,’’ Seng said. “Swinging wood bats are a little different. This is good preparation for next month when we come back for the national regional.’’

Enid High All-Stater Colby Jarnagin was 0-for-3 for Seng MVP. He is headed to Cowley County Community College. Several of Seng’s players are college bound with many taking the JUCO route at either Seminole or Cowley or Eastern Oklahoma and some more at Southern Nazarene.

“We have a lot of guys that are preparing for the next level,’’ Seng said. “We have a talented team.”