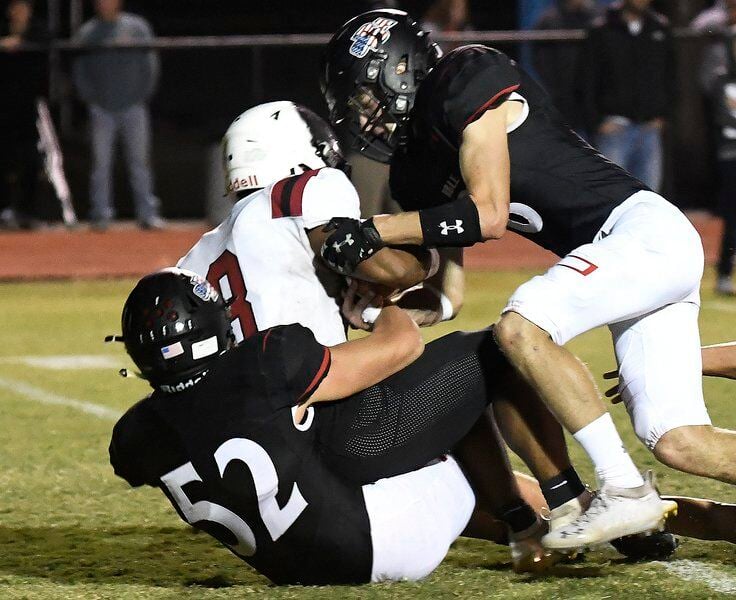 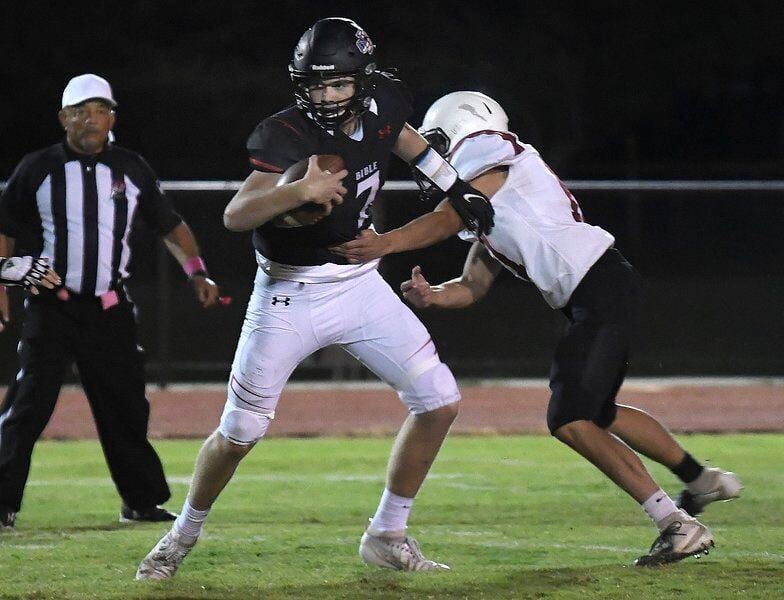 ENID, Okla. — Oklahoma Bible Academy football head coach Chris Cayot had one message in his final address to his team after the conclusion of Tuesday's practice for Friday's District A-3 matchup with Oklahoma Christian Academy at Edmond North High School.

Don't let this be a trap game.

"That would come from thinking that we're really better than what we are and OCA is not as good as they are,'' Cayot said. "That's something coaches are constantly fighting. When kids start listening to social media and ranking and everything and start believing and drinking the Kool-Aid and believing the hype ... What makes it scary from a coaching standpoint if your players prepare and play like that, they are going to get beat.''

OCA was held to 51 yards in total offense — all on the ground — and were 0 of 11 on third down conversations against the Wildcats.

OCA runs the flexbone — a true option offense where the quarterback is under the center instead of in the shotgun.

"It can be difficult to defense, especially if you haven't been doing it,'' Cayot said. "When you only have a week to prepare for them, it changes a lot of things. Kids can get into a niche of defending certain things that's popular now (the spread). When you show a kid something like running the wishbone, they don't know what to do. They have seen it on Madden, but other than that, they really don't know what's going on.''

The key is discipline — taking care of all three phases of the option — the quarterback, the fullback and the pitch man, Cayot said.

"It limits you on what you can do defensively,'' Cayot said. "Every good option team has some things that they like to do off of it like reverses, pop passes and play action passes. We have been getting ready for all of that stuff. ... We don't want them to have the ball for a long period of time."

The Trojans' 34-7 win over Watonga last week was a bit misleading, Cayot said. The OBA defense bent, but didn't break holding Watonga twice inside the 10 and two other times in the red zone.

"In the end, we made some things happen,'' Cayot said. "That's something that we hadn't done at the right time in our two losses.''

"We had several guys that played pretty well,'' Cayot said. "Jake Colby had his best game of the season. He is getting the hang of playing end in our three front. All the guys in the box played well and we did a good job of containing their option game and stopping them in the box.''

Jett Cheatham rushed for 222 yards on 18 carries, including a 96-yard run after OBA held the Eagles at the four-yard line in the third quarter. Cheatham has rushed for nine touchdowns and scored two others on pass receptions.

"We're always looking for ways to get him (Cheatham) loose in space, but that was really unique,'' Cayot said. "We basically ran a trap up inside and the linemen did a great job blocking and getting him into the second level. I had several people tell me how well the wide receivers blocked down the field and they did. That was out in space. Jett cut it off well and then just used his speed ... but it all started with the offensive linemen.''

Linemen Ethan Small and Gio Bartlozzi are back from the injured list.

Bodie Boydstun was nine of 17 passing for 181 yards and three touchdowns. He did not throw an interception for the first time this season.

"Bodie is getting closer to being a junior every game,'' Chris Cayot said.

Boydstun's confidence has risen with the improvement of the offensive line.

"He is getting confident that he is not going to get hit,'' said Chris Cayot. "That's a good time to play quarterback. I've been in that position before. That's fun. When you are running for your life, it's not fun.''

Note: OBA's district game at Hinton next week has been moved from Thursday to Saturday. Hinton has been in quarantine because of COVID-19. It won't be released from it until next Wednesday.

"It's not ideal being on fall break, but we need to play all the district games,'' Cayot said. "We'll just pretend we're playing big time college football.''