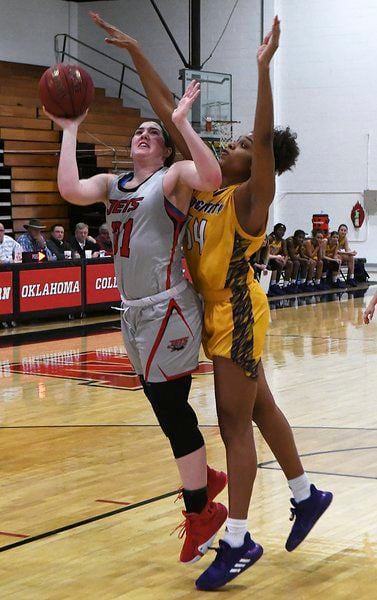 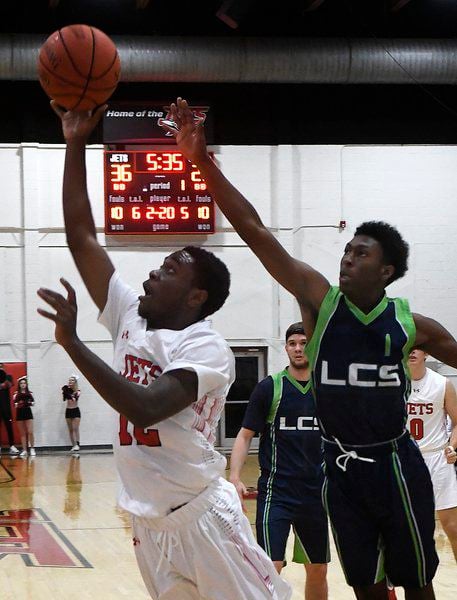 ENID, Okla. — The Northern Oklahoma College Enid women's basketball team finds itself one-half game out of first place in the Oklahoma Collegiate Athletic Conference after the Lady Jets thoroughly dominated first-place Redlands 75-60 on Monday night. The win improved the Lady Jets to 14-3 overall and 5-1 in conference.

NOC Enid head coach Scott Morris called it the team's most complete game of the year but said the impetus for the game, and the Lady Jets' current three-game winning streak, was NOC Enid's 69-49 loss to Northeastern Oklahoma A&M on Jan. 9.

"To lay down and get beat by 20 was surprising," Morris said. "We had our come to Jesus meeting after that. We knew what we had to fix and fix it quickly."

Morris said most of it was mental and had to do with two of the Lady Jets' top players, Sarah Griswold and Kaylee Hurst, being sidelined with injuries, and the other Lady Jets looking to others to step up instead of taking it on themselves.

"We knew we had a little bit of a fight (to overcome the injuries) and it was a matter of accepting that," Morris said. "We had a couple of intense days of practice after that."

The defending Region 2 champion Lady Jets have now won two straight conference games, and other players have answered the call.

Freshman guard Shelby Black had 11 "hard fought" points in the win. Morris said the defense focused on stopping Black, who leads the team with 18.9 points per game, good for third in the conference as well. "She did her job and occupied a lot of the defense," he said.

"The bar got raised (Monday) night for expectations for this team," Morris said.

The Lady Jets hope that momentum carries forward to Thursday when they host Murray State (11-9, 2-3) for a 5:30 p.m. tip at the Mabee Center. The Lady Aggies struggled, going 0-5 to start conference play, but have recently turned it around with blowout back-to-back wins over NOC Tonkawa, 92-67 and 61-32 over NEO.

Murray State freshman guard Jillian Ingram is second in the conference in three-point shooting, hitting 44.6% from beyond the arc.

"With the way they have played in their last two games, they have to be taken seriously," Morris said.

The NOC Enid men (12-8, 3-3) also came away with a win Monday night, slipping past Redlands 70-69 for their fifth win in their last six games and second straight OCAC victory. It was the Jets' 12th win of the season, matching their win total from last season.

Four players were in double figure scoring for the Jets, lead by sophomore guard Rance Kendrick's 17 points and 16 points from redshirt freshman guard Josh Perkins. Zach McDermott and Ikenna Okeke each had 11.

It was a game that came down to the final moments.

Defense has played a strong role for the Jets, who kept Connors State and Redlands under 70 points and have limited opponents to 68.5 points per game over their last six contests. The Jets held Connors to 33% from the field in their win.

"That's been our biggest area of growth has been on the defensive end," Butcher said. "We have put the emphasis on being the tougher team."

Murray State's only losses have been twice to No. 1 Ranger (Texas) and perennial power Hutchinson (Kan).

The Aggies are on a seven-game winning streak and coming off OCAC wins against NOC Tonkawa (66-62) and NEO (69-67). Murray State is averaging 84.4 points per game. The Aggies feature a balanced scoring attack with only one player averaging double figures, sophomore forward Kori Guest with 12.2 points per game off the bench.

"They have great depth," Butcher said. "They've had multiple guys lead them in scoring. Every guy that comes in is a threat. We have to contain and from there just be able to cover their shooters."

July 10, 1952 - February 28, 2020 Celebration of Life Service for Alvin Lee Eylar, Jr., 67 of Enid, will be 3:00 p.m. Saturday, February 29, 2020, in the Anderson-Burris Funeral Home Chapel with Rev. Kenneth Wade officiating. Cremation arrangements are under the direction of Anderson-Burris …