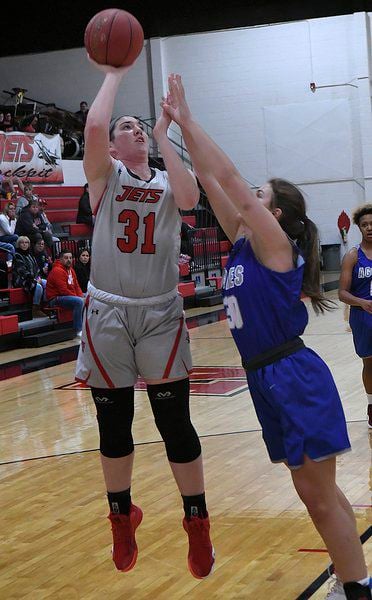 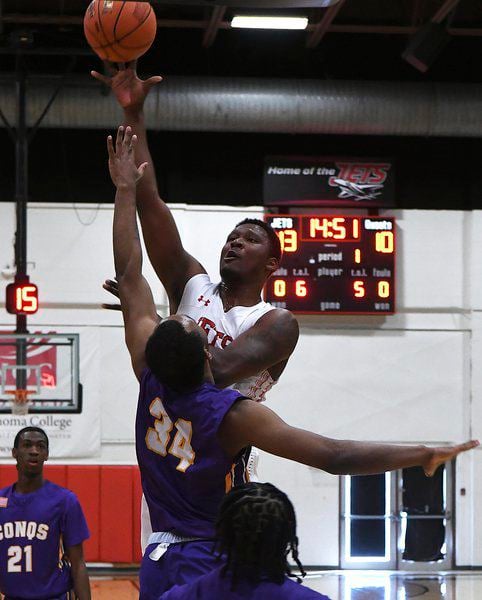 ENID, Okla. — Northern Oklahoma College Enid's basketball teams will be looking to make it back-to-back road conference wins when they travel to Eastern Oklahoma on Thursday.

Both the Jets and Lady Jets are coming off Oklahoma Collegiate Athletic Conference victories at Western Oklahoma on Monday.

The Lady Jets (15-4 overall, 7-2 conference) used a 26-point performance from center Lauren Wade, who came into the game averaging less than 10 points per contest.

Wade was 10 of 11 from the field against the Lady Pioneers on her way to a career-high scoring night as a Lady Jet. The 5-foot-11 freshman also led the team in rebounding Monday with 11 boards.

"Lauren did a really good job," Lady Jets head coach Scott Morris said. "We thought we had a matchup advantage there. Western is a really good team, but smaller in the post, and we tried to exploit that weakness. She did a god job battling, and the guards did a great job as well."

Joining Wade in double digit scoring Monday was NOC Enid's leading scorer, Shelby Black. The freshman guard had 13 points and was 3 of 10 from three-point range.

"Shelby attracts a lot to of attention, and she hit an important basket late for us," Morris said. "She's an integral part of what we do."

The victory Monday over Western kept the Lady Jets within one game of first-place Redlands.

Morris said the Lady Jets are "doing it by committee" with the loss of starters Kaylee Hurst and Sarah Griswold to injuries. "We’re still searching for our identity on the court a little bit," he said. "We have a good attitude and good work ethic. I'm really enjoying coaching this group of girls."

Thursday's game will be the second meeting between the Lady Jets and Lady Mountaineers. NOC Enid defeated Eastern 72-63 at home on Nov. 21. Black led the Lady Jets' offensive attack that night with 25 points.

The Lady Mountaineers (12-10, 4-4) are coming off a 79-66 loss to Northeastern Oklahoma A&M on Monday. Eastern currently finds itself in a five-way tie for third place in the OCAC and is two games behind NOC Enid.

"They're executing well right now," Morris said. "They're just a solid team. It’s always difficult to travel down there (to Wilburton) and play in that environment."

Jets coming off their 'most complete game'

The Jets (13-9, 4-4) are coming off their highest offensive output in conference play this season with their 94-75 win over Western Oklahoma on Monday.

Six players were in double digits for NOC Enid, led by sophomore forward Josh Perkins' double-double, with 18 points and 14 rebounds.

"That was probably our most complete game this season," said Jets head coach Aaron Butcher. "We had a 30-point lead with five minutes to go in the game, and anytime you can have a 30-point lead in a conference game, you know it's going right. We played really well defensively and played with great energy and passion."

The victory evened the Jets' conference mark at 4-4. NOC Enid currently finds itself in fifth-place, one game behind fourth-place Seminole State in the OCAC race. Their victory Monday also meant they have surpassed last year's win total when the Jets finished 12-19.

"Everyone in the standings is one game apart, and with only eight conference games left, anything can happen," Butcher said. "We just want to keep playing well.'

Eastern Oklahoma (7-13, 2-6) finds itself in the midst of a three-game losing streak following its 83-81 loss to NEO on Monday. That loss followed on the heels of a 104-59 drubbing by NOC Tonkawa on Jan. 23. The Mountaineers have dropped four of their last five games.

The Jets will be looking to sweep the season series against the Mountaineers. NOC Enid narrowly defeated Eastern 73-71 at home in the conference opener on Nov. 21. The Jets had three players in double digits in their earlier win over the Mountaineers, led by Okeke's 14 points.

"Eastern plays such a unique style," Butcher said. "It's chaos for 40 minutes. They shoot a ton of threes. They're a tough team to play."

NOC Enid returns home to the Mabee Center on Monday against Seminole State.

July 10, 1952 - February 28, 2020 Celebration of Life Service for Alvin Lee Eylar, Jr., 67 of Enid, will be 3:00 p.m. Saturday, February 29, 2020, in the Anderson-Burris Funeral Home Chapel with Rev. Kenneth Wade officiating. Cremation arrangements are under the direction of Anderson-Burris …

ENID - Service for Bernard N. Mena, 87, Enid is 10:00 am Saturday, March 7, 2020, at Willow Road Christian Church. Burial in Memorial Park Cemetery by Ladusau-Evans. Visitation is Friday from 6-7 pm at the funeral home.

ENID - George was born January 1, 1957, and passed away peacefully February 28, 2020, in Enid, OK. Arrangements are incomplete and will be announced by Amy Stittsworth Funeral Service. Remembrances may be shared online at www.stittsworthfuneralservices.com