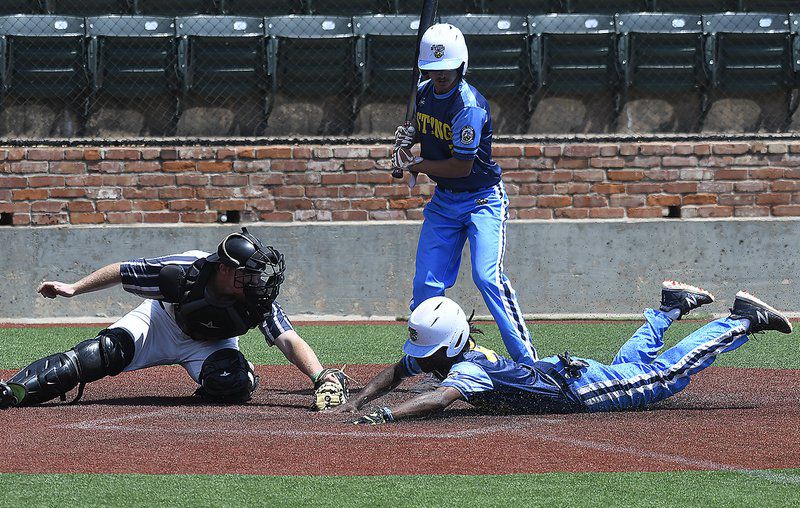 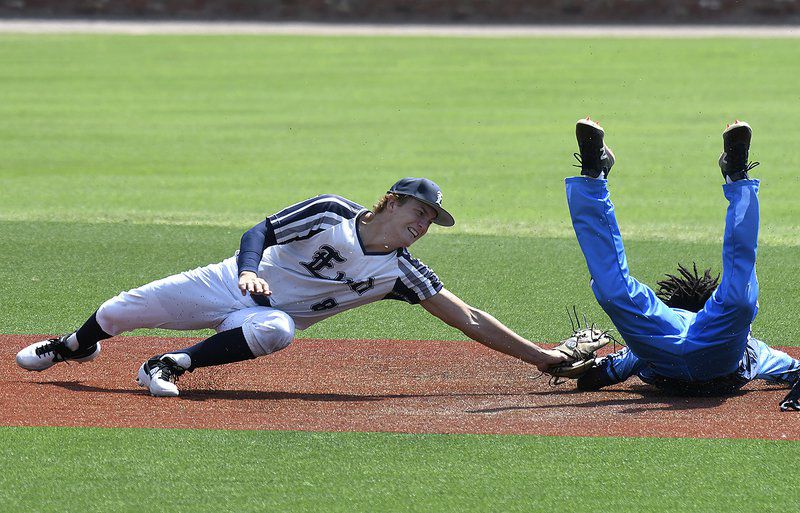 ENID, Okla. — Memories of the Enid Majors’ 2005 American Legion World Series championship were stirred up Thursday in the locals’ 7-6 victory over the St. Louis Sting in pool play at the AABC South Plains Regional Tournament at David Allen Memorial Ballpark.

The Majors — like the 2005 team in the championship game — won the game on a balk by Sting reliever Casey Cayton allowing Will Fleece to score from third base.

“The kid did something illegal,’’ Webb said. “That’s part of the game. It’s not a cheap win in my book. He didn’t disengage with his right foot instead of falling off his left foot. He clearly balked. It wasn’t a flinch move. It was a good call by the umpire. It was a legitimate balk.’’

More importantly, the Majors were able to start 1-0 in pool play.

Webb, long an assistant with the rival Woodward Travelers, was aware of the balk history of the Majors.

“Absolutely,’’ he said. “I don’t think I have won a game on a balk before. It was a unique situation for that to happen.’’

Fleece, the son of a former Majors star (Mike) was aware of the past history.

Fleece’s speed allowed the Majors to overcome the Sting’s scoring the go-ahead run in the top of the eight on a daring steal of home by Darryl Williams.

Williams started the inning on second as part of Connie Mack’s new rules on extra innings. He stole home with two outs.

Fleece, with Jared Gay on second, opened the inning with a perfectly executed bunt between the third base line and the pitcher’s mound. Gay went to third.

“I just went up in the box and made sure that I got it down and advanced the runner,’’ Fleece said. “It just happened I got it down the line and was able to get to first.’’

Piercen McElyea, running for Gay, scored on a sacrifice fly by Conner Gore. Shelby Gregory walked to put runners on first and second.

Fleece and Gregory executed a double-steal with Dom Johnson up.

Cayton was called for the balk on the next pitch.

“Will’s speed made a lot of difference,’’ Webb said. “We don’t win the game if Will doesn’t steal third on the pitch before.’’

Webb said “it never crossed my mind’’ to have Fleece steal home as Williams did the half-inning before.

“It feels good,’’ Fleece said of his heroics. “It was exciting.’’

Webb was not a fan of the new extra-inning rules with the runners starting at second in the eighth.

“I hate it,’’ he said. “It’s not baseball. It’s more exciting for the fans to watch because it’s forcing action but as a pure baseball-ist, it’s not like pure baseball is like.’’

Fleece said he was a little confused as he opened the inning with a runner on second.

“I didn’t exactly know what was happening,’’ he said.

Teammate Bryce Madron knew what was happening as he went three-for-three with three doubles and three RBI.

He doubled off the right field wall in the second to score Gore, who had reached on an error.

He tied the game in the fifth at 3-3 with a two-RBI double to plate Drake Kerr, who had reached on an error and Gore, who had singled.

With the Majors down 5-3, he opened the seventh with a double. That knocked out Sting starter Konner Thompson, who had allowed only five hits in six innings and survived six walks.

Gregory, running for Madron, scored on an RBI single by Johnson. Johnson stole second, went to third on a wild pitch and scored on a double by Blake Scott. Courtesy runner McElyea was stranded at second after Cayton got Chase McCracken and Gay to fly out.

“It was a great game,’’ Madron said. “It was a great job by Willie. Him being fast helped us out. I was seeing the ball great. I was able to get a great swing on it and I did all I could do.’’

Madron, who has been slowed by injuries, understood about being taken out of the game in the seventh.

The Majors did not lead in the game until Fleece scored the winning run.

Jackson allowed two hits and three runs over his three innings while striking out two and walking four. The Sting did leave a runner on third in the eighth when Jackson retired Venable on a ground out.

“We won because we executed when it mattered,’’ Webb said. “We made a few plays and we were fortunate enough to catch a break. It was nice to win. I just wished we could have executed better. We had some hitting situations where if we had hit the ball better, we wouldn’t have been in that spot.’’

More dramatics: The Majors improved to 2-0 in pool play, defeating the OK Drillers 2-1 in the late game Thursday night. Bryce Madron drove home the game-winning run with a walk-off bases loaded single in the bottom of the seventh. The Majors next play Midwest Nationals 17 on Saturday at 10 a.m.