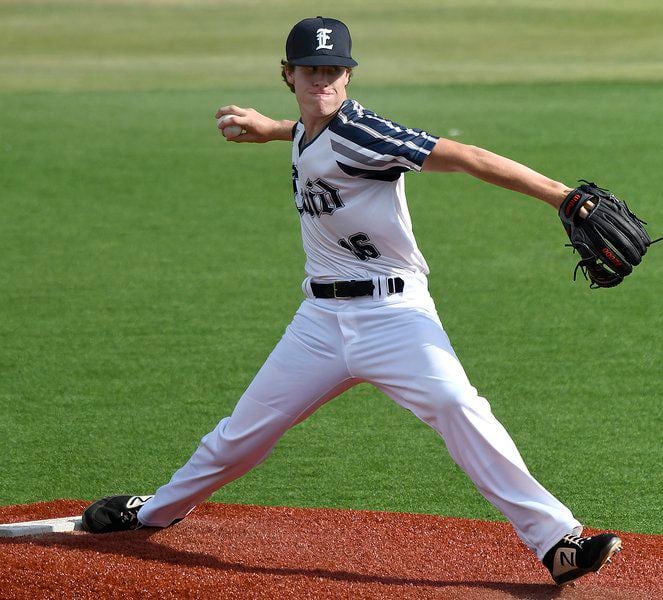 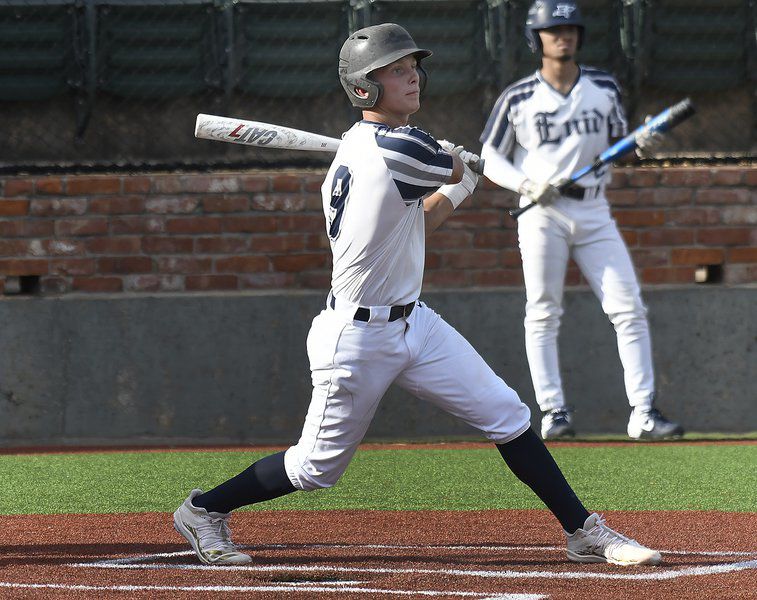 Enid Majors' Tate Taylor hits a walk off single to the give the Majors a 8-0 run rule win against Weatherford Monday, June 1, 2020, at David Allen Memorial Ballpark.

Enid Majors' Tate Taylor hits a walk off single to the give the Majors a 8-0 run rule win against Weatherford Monday, June 1, 2020, at David Allen Memorial Ballpark.

ENID, Okla. — Titan Stephens, who missed Enid's shortened baseball season with a broken wrist, was more than ready for the resumption of the summer baseball season at David Allen Memorial Ballpark.

Stephens hit Weatherford's Cal Agan's second pitch over the left field fence for a solo home run in the second to ignite the Majors' 8-0 victory over the Eagles at the Oklahoma Shootout Monday.

Stephens and his teammates had only one practice (last Thursday) but didn't show any rust. They did not commit an error and pitchers Kasen Jackson and Jared Gay combined for a three-hitter in the five inning game.

"It was good to get back on the field again,'' Stephens said. "It was great to start the season like that. I was pretty excited about that.''

Stephens was pleasantly surprised to homer in his first at-bat, but he knew the ball was out when he connected on a fastball.

"I think we're going to have a good solid, scrappy team," Stephens said. "I'm excited for the season.''

The game was the first at the ballpark since March 10. The Oklahoma Secondary Schools Activities Association lifted a ban on organized sports as of Monday.

Stephens said his wrist was healed.

Enid had only six hits, but took advantage of nine walks and two Weatherford errors.

"It was fun,'' Webb said. "Winning is a lot better than losing. I wasn't surprised how well we played. We are a really talented group. I was kind of nervous, hoping that we would get going. That was a really good shot by Titan.''

Scott followed Stephens blast with a walk and scored when Gay tripled to the left corner. Taylor walked. Gay scored from third after Taylor got caught in a rundown.

Enid added four runs in the third. Bryce Madron doubled to lead off the inning, stole third and came home on a throwing error on the play. A fielder's choice by Braedyn Sommer and walks to Stephens and Scott loaded the bases. Chase McCracken cleared the bases with a three-RBI double.

"They were ready to play baseball,'' Webb said. "They have been playing all of their lives. They know the strike zone. That makes you a good hitter. If you swing at good pitches, you'll be successful.''

Jackson, an All-State pitcher for Webb at Vici, retired the first six batters. He walked only one and struck out three. He got in a minor jam in the fourth after giving up back-to-back one-out singles, but struck out Braden Epp and got Murphy Beck to fly out to center.

"He's a pretty good player,'' said Webb of Jackson, who has signed with Southern Nazarene. "He was getting ahead of everybody. He threw strike one and then worked his stuff after that. Getting strike one is pretty important. The defense did its job. He got some ground balls and some fly balls.''

Jackson said control was the key for him.

"I just throw strikes and let the defense do their job,'' he said. "I've been working out a lot and keeping my arm in shape. It just felt good to be back on the baseball field again.''

Jackson said he is about where he thought he would be. He said he was somewhat disappointed with the pitch count "but that's all right.''

Gay did not allow a hit in pitching a scoreless fifth inning. He walked two but lead-off hitter Brett Bozarth was thrown out trying to steal third. He struck out Zack Rehrman with a runner on first.

Webb was not surprised by an errorless game despite having the one practice.

Jacob Bookout of Oklahoma Christian School and an Oklahoma State signee, is scheduled to pitch for Enid.