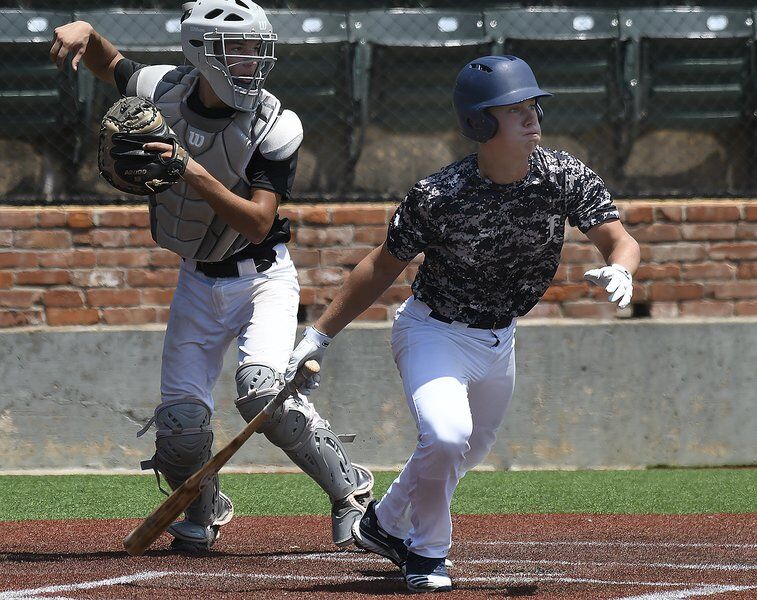 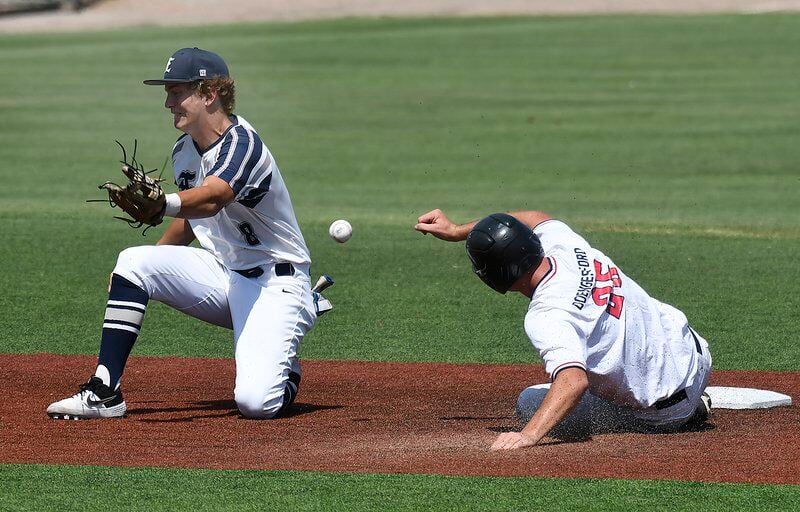 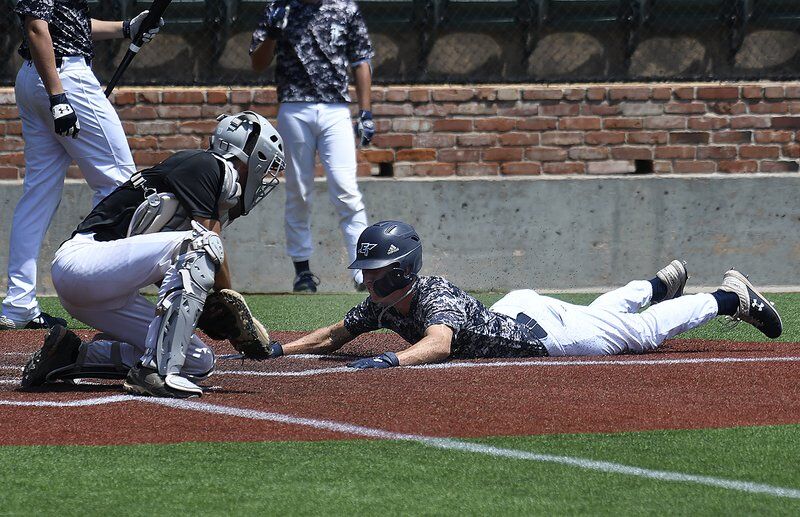 ENID, Okla. — Bartlesville made the big play at the right time in a 5-3 win over the Enid Majors to reach Sunday’s championship game of the Connie Mack Oklahoma State Tournament at David Allen Memorial Ballpark Friday.

The Majors and the Braves are both 2-1 in Pool B and both have allowed 14 runs in the tournament. However, the Braves advanced to Sunday’s championship on the strength of their win over the Majors, who were coming off a championship at last week’s regional tournament.

Jones and Moreland faced the minimum of nine batters over the first three innings.

The Braves, though, were able to take advantage of opportunities in scoring two runs in the fourth and three in the fifth to take a 5-1 lead.

Will Parsley opened the Braves’ fourth with a double. Harold Borg popped up on a bunt attempt, but Moreland and catcher Blake Scott collided on the play, putting runners on first and second. Hamilton Clark sacrificed both runners up a base. Andrew Harden struck out but Parsley and Borg both scored when first baseman Jared Gay was unable to come up with a throw from shortstop Conner Gore.

“That bunt play was big time,’’ Webb said. “Things snowballed from there. That allowed them to get some momentum. If you give a team momentum in baseball, crazy things can happen. They get more confident at home plate.’’

The Braves scored three runs with two out in the bottom of the fifth to go up 3-1.

Parsley slid into home to make it 4-1. Scott threw to second trying to get Clark. Borg kept running and beat the throw back home.

“I don’t know if that was the bigger play or not,’’ Webb said. “What really hurt us was the bunt. We threw two breaking balls when we should have thrown some fastballs. They scored some runs off that. You have to make plays in big games.’’

The Majors had broken the scoreless tie in the fourth when Jaxson Crull reached on a bunt, stole second and scored on a Gore single.

Ryan Jones was able overcome some adversity in the sixth when Enid scored twice, but left the bases loaded.

Shelby Gregory singled, went to second on a single by Crull and scored after walks to Bryce Madron and Dom Johnson. Pinch hitter Chase McCracken drew a bases-loaded walk to score Gore, who had reached on a fielder’s choice. Jones, though, got Scott to ground out to end the inning and had a 1-2-3 seventh, striking out Gregory to end the game.

The Majors had a rally snuffed out in the fifth when Titan Stephens singled and went to second on a wild pitch. He was thrown out trying to steal third.

“You have to give credit to that guy on the mound,’’ Webb said. “He threw his butt off today. He was mixing it up well. He was throwing strikes and they were making plays. Big games are won on timely hits. We didn’t do our jobs.’’

The Enid Plainsmen fell to to the Burkburnett Black Sox, 7-5 in eight innings in a game full of controversy.

The Plainsmen are 1-2 in Pool A and could drop to the seventh place game Sunday.

The Plainsmen appeared to be out of the eighth inning when left fielder Jake McCool threw out Braeden Jones trying to score from second on a single by Alex Leon. The umpires, though, ruled Enid third baseman Blake Priest interfered with Jones’ path home. That broke a 5-5 tie. Leon scored on a double by winning pitcher Gerritt Tointigh.

Tointigh retired the Plainsmen in the eighth to pick up the win. Pinchrunner Brock Slater, who had started the inning at second (according to Connie Mack extra inning rules) was thrown out trying to steal third.

“It was legit,’’ said Enid coach Brad Gore about the interference play.

“Both umpires had it. It was just one of those things where we got caught standing around watching. You can’t stand around and watch. We were standing in the way. We had the game if we didn’t stand in the way. We would just have to get one run. Then they get a big hit down the line on an 0-2 pitch. That changed our whole approach in the last inning. We didn’t play very mentally sound today. In the last couple of days, our minds haven’t been too sharp.’’

The Plainsmen (17-7) had two runners picked off. McCool was picked off first after hitting a one-out single. Garrett Brooks had followed that by reaching on an error and stealing second but was stranded at second when James Humphrey struck out.

Enid had tied the game at 5-5 with two runs in the sixth. Maddux Mayberry walked and scored after singles by Zach McEachern and Priest. McEachern scored on a ground out by Reece Slater.

“We let it get away,’’ said Coach Gore. “We didn’t execute some things. When you don’t do that, you are going to lose. Tip your hat to them for coming through when they needed to.’’

The Plainsmen went up 1-0 in the first when Kade Goeke doubled, went to third on an error in a rundown attempt and scored on a ground out by McCool.

Enid went up 3-1 with two runs in the third. Reece Slater, who led off with a walk, stole home on a double steal with Garrett Shull, who had a one-out single. Shull scored on a Brooks single. Brooks was thrown out stealing second.

“Our base running has not been sharp the whole tournament,’’ said coach Gore. “We were just mentally behind this week.’’

The Black Sox made it 3-2 in the fifth when Leon walked, went to third on a double by Kody Bigford and scored on a ground out by Holden Bartosorsky. They went up 5-3 with three runs in the sixth with the big hits being an RBI single by Kody Walko and a two-RBI single by Tointigh.

Jake Kennedy had a solid start for Enid allowing only two hits and two runs over five innings. He walked five and struck out three.

The Plainsmen will play in the 5th-place game against Woodward Sunday at 3 p.m.