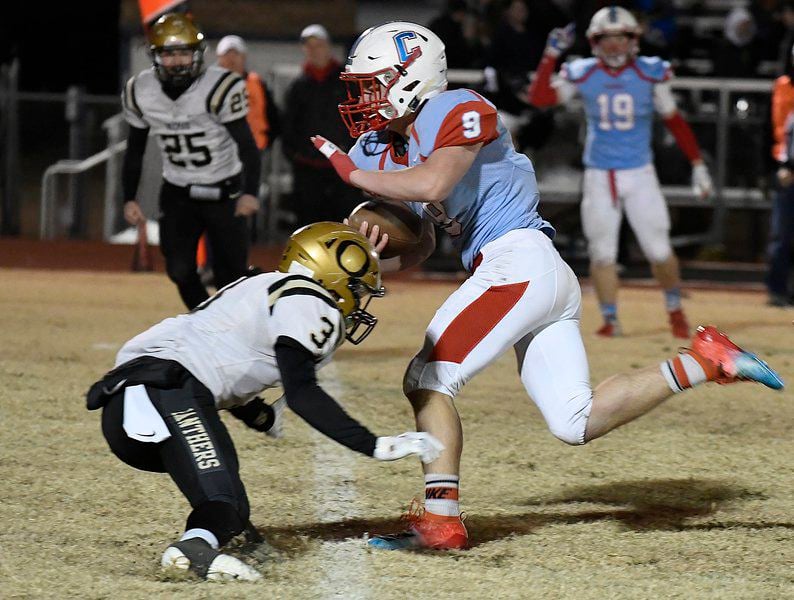 Chisholm's Lane Smith tries to get by Okemah's Kaiden Bear during the first round of the Class 2A playoffs Friday, Nov. 15, 2019 at Chisholm High School. 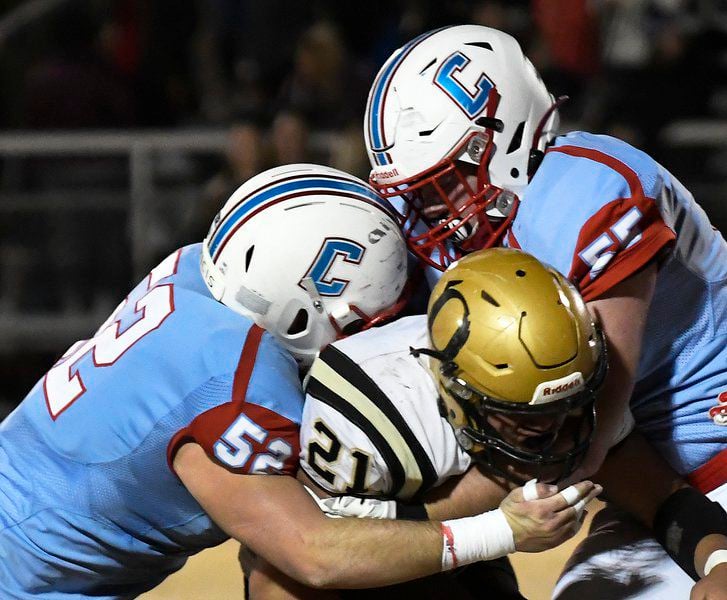 Chisholm's Hudson Fields and Keegan Goddard stops Okemah's Makhan Harjo during the first round of the Class 2A playoffs Friday, Nov. 15, 2019, at Chisholm High School.

Chisholm's Lane Smith tries to get by Okemah's Kaiden Bear during the first round of the Class 2A playoffs Friday, Nov. 15, 2019 at Chisholm High School.

Chisholm's Hudson Fields and Keegan Goddard stops Okemah's Makhan Harjo during the first round of the Class 2A playoffs Friday, Nov. 15, 2019, at Chisholm High School.

ENID, Okla. — Chisholm’s success starts with the defense, and there was no better example of that than the Longhorns’ 41-8 win over Okemah (5-6) in the first round of the Class 2A playoffs Friday night at Chisholm.

The defense began the game forcing Okemah to go three-and-out on its first drive, thus setting up Chisholm (9-2) for its first touchdown score of the night — a nine-yard rushing touchdown by senior running back Lane Smith.

Later in the second quarter, Dent recorded his second touchdown pass when he found senior Cade Balenti on a fake-sweep pass for four yards. Chisholm led 20-0 at halftime.

“The defense basically sets up the whole game,” Chisholm head coach Joey Reinart said. “Whether it be field position, turnovers, all those things. It all starts with the defense.”

Okemah’s offense finished the game with three first downs and wasn’t able to record its first one until the second quarter. Prior to that, if the Panthers weren’t punting the ball, they were turning it over. After Eagan’s interception, senior safety Luke Balenti picked off Wilson on the very next drive. Chisholm finished the game with three interceptions.

After jumping out to a 20-point lead, Chisholm’s offense sputtered and walked away from a few second-quarter drives without points.

“The offense at times was really, really good. But at times, we kind of went on some downward waves there where we didn’t focus well enough there,” Reinart said. “We just let off the gas a little bit.”

Reinart also said Chisholm “got loose” with the play-calling as the unit was trying to work on some different plays.

Dent said the defense has been “playing out of their minds” this year.

“It’s really nice, especially because we fumbled the ball and you can really trust that in — at most — six plays, you’re getting the ball back,” he said.

Chisholm lost two fumbles, one of which was lost near the goal line in the first quarter. Okemah punted the ball back to Chisholm after both fumbles. While the defense made quick work of the Panthers, Dent said he didn’t mind the short rests on the sideline.

“It’s always great to be back out there,” he said. Dent finished his night completing 17 of his 26 passes 183 passing yards with three touchdowns and one interception. Dent’s third touchdown pass came in the third quarter when he hit senior receiver Cody Wiechert for a 14-yard score to make it 35-0.

Chisholm finished with 127 rushing yards with Smith with a team-high 47 rushing yards. After his first-quarter touchdown run, Smith racked up two more rushing touchdowns in the third and fourth quarters.

The defense also got the Longhorns out of tough situations at times. Midway through the second quarter and with Okemah down by 20, Chisholm was prepared to punt the ball away, but a botched snap gave Okemah the ball back near the red zone and its first real chance at a touchdown.

But the Longhorns defense held strong and made four consecutive stops to force a turnover-on-downs and prevent the Panthers from scoring.

With less than two minutes left, the Panthers avoided the shutout with a 61-yard touchdown run by Coltin Parish. Friday night’s win was the eighth-straight game in which the Longhorns didn’t surrender more than 14 points.

Senior middle linebacker Hudson Fields said the key for the defense has been the effort everyone puts forth to make the Longhorns a stout and aggressive unit.

“We really work at it so hard,” he said. “Our overall technique is fantastic, Guys are flying toward the ball and tackling. Just simple as that.”

Reinart said the construction of this defense began last year when most of the playmakers were gaining their starting experience on the job. Reinart and his coaching staff knew this year’s defense was going to be “really solid.”

“And these guys proved that all year long,” Reinart said.

Chisholm hosts Beggs in the second round next Friday at Chisholm. Beggs defeated Nowata 62-28.