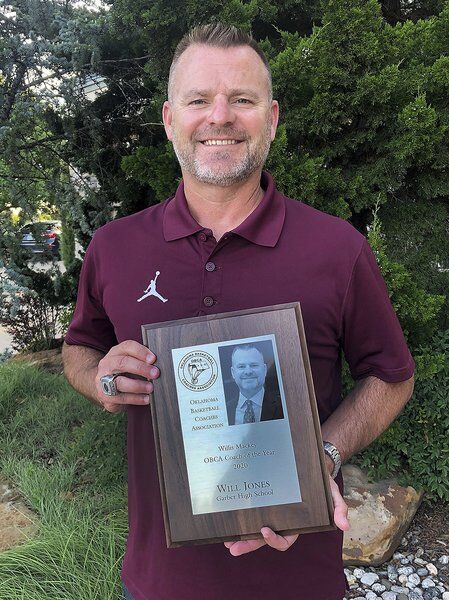 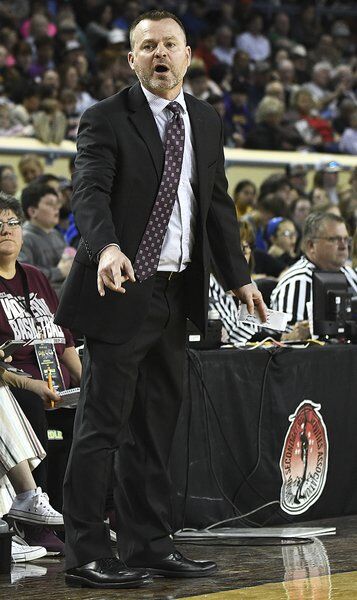 Will Jones was entering his second year as Garber Public Schools superintendent in 2017 and thought his coaching days were behind him. But fate had different ideas and he took on the role of high school boys basketball coach.

It’s worked out pretty well for Jones and Garber.

Jones was recognized Saturday at the Oklahoma Basketball Coaches Association’s All-State basketball games when he was named OBCA coach of the year. It was the latest piece of hardware for Jones and Garber after he led the Wolverines to their second-ever Class A state basketball title in March with a thrilling double overtime win over Arapaho-Butler.

However, Jones sees the coaching honor as being about more than him.

“It’s a team award because our team has really good players and I’ve had really good assistants with Rashad Sullivan and Dallas Hunt, but at some point it’s just my name that gets out there,” Jones said on Tuesday. “It’s almost a little embarrassing.”

Still, Jones should be used to the recognition at this point, having also claimed top coaching honors as Skeltur Conference coach of the year and from the Tulsa World, among others this past season.

Getting the award from OBCA though carries some special significance.

“It means a lot,” Jones said. “I have been a member of the OBCA for a long time and so many coaches I respect are officers in that organization and in the hall of fame of the organization. It’s one of those statewide awards that is definitely special. When it’s a statewide award it carries a little more weight.”

Prior to taking on the Garber boys basketball job, Jones had prior coaching experience at Pawhuska, Enid and Grove.

His 2019-2020 Garber squad went 26-4 and dominated most of the teams that had the misfortune of coming up against the Wolverines.

Garber finished the season by winning 18 straight games. Three of its four losses came in the tough early season Tournament of Champions in Tulsa where the Wolverines went up against larger schools, including the No.1 ranked teams in Class 5A (Del City) and 3A (Millwood) and No. 7 Class 2A Okemah. It lost by one point to Okemah and hung tough with Del City and Millwood.

“We were in three wars against really, really tough competition,” Jones said shortly after the tournament. “And that can only make us better.”

It certainly paid off as the Wolverines rolled to a Skeltur Conference Tournament championship with a 72-42 win over Pioneer and then carried that momentum into the state tournament.

“It’s (coaching) been so rewarding in so many ways and so much so more than the awards,” Jones said. “It’s the opportunity to coach with Rashad and Dallas and to coach really good kids. They’re talented obviously. We don’t win a state championship without talented players, but they’re fun to coach. I leave the gym almost every day feeling like we got something done and it was productive. Good practices. Good attitudes. It’s really just been more rewarding than I ever thought it could be.”

Jones also feels fortunate Garber was able to play for a title at all. Shortly after the completion of the Class A and Class B state tournament finals, the state tournament for Classes 2A-6A was canceled due to the coronavirus pandemic. He felt it particularly for his colleagues.

“I was traveling to the 2A tournament on a Thursday the next week (after winning the Class A crown) and planning to watch Cashion and Hooker play at 2 p.m. in Yukon and it’s maybe 11:30 a.m. that word started coming out that it’s probably going to be canceled and that’s when it hit just how fortunate we were.

“John Hardaway, coach and a great friend of mine at (Class 2A) Cashion, and (Class 6A) Booker T. Washington coach Conley Phipps both had a great chance to win their class. I just put myself in their shoes and just how devastating that was for them and it just makes me very blessed that we got to do what we got to do.”

Back to school: Jones said Garber is set to resume classroom teaching with the start of the new school year, which begins Aug. 6 for the students with teachers reporting the preceding Monday.

“It’s challenging,” he said when discussing the reality of returning after schools were shut down due to the coronavirus. “We’re screening kids at the door, we’re limiting our visitors.” He said masks are optional at this time, but if a teacher asks a student to put one on that is an option.

“Some schools are backing their start dates up, but I really believe, and our board believes, that the sooner we can get around kids the better. Especially if there’s another shutdown, that’s more valuable than putting it off and never seeing the kids for the entire year. Our kids have been out since March and we just feel like it’s super important. They have missed so many things and it will be good to get back with them.”

ENID - Evelyn F. Wells, age 90, of Enid, passed away August 9, 2020. Graveside services will be 11:00 am Saturday at the Enid Cemetery under the direction of Ladusau-Evans Funeral Home.

ENID - Funeral Service will be 10:00 am, Thursday, August 13, 2020, Stittsworth Memory Chapel, Pastor Steve Meier officiating. Burial will follow at Enid Cemetery under the guidance of the Amy Stittsworth Funeral Service. Remembrances at www.stittsworthfuneralservices.com