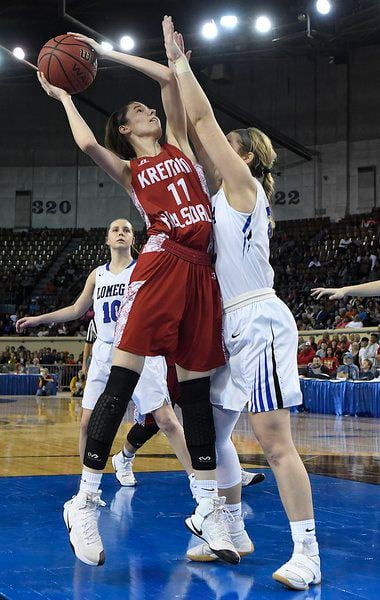 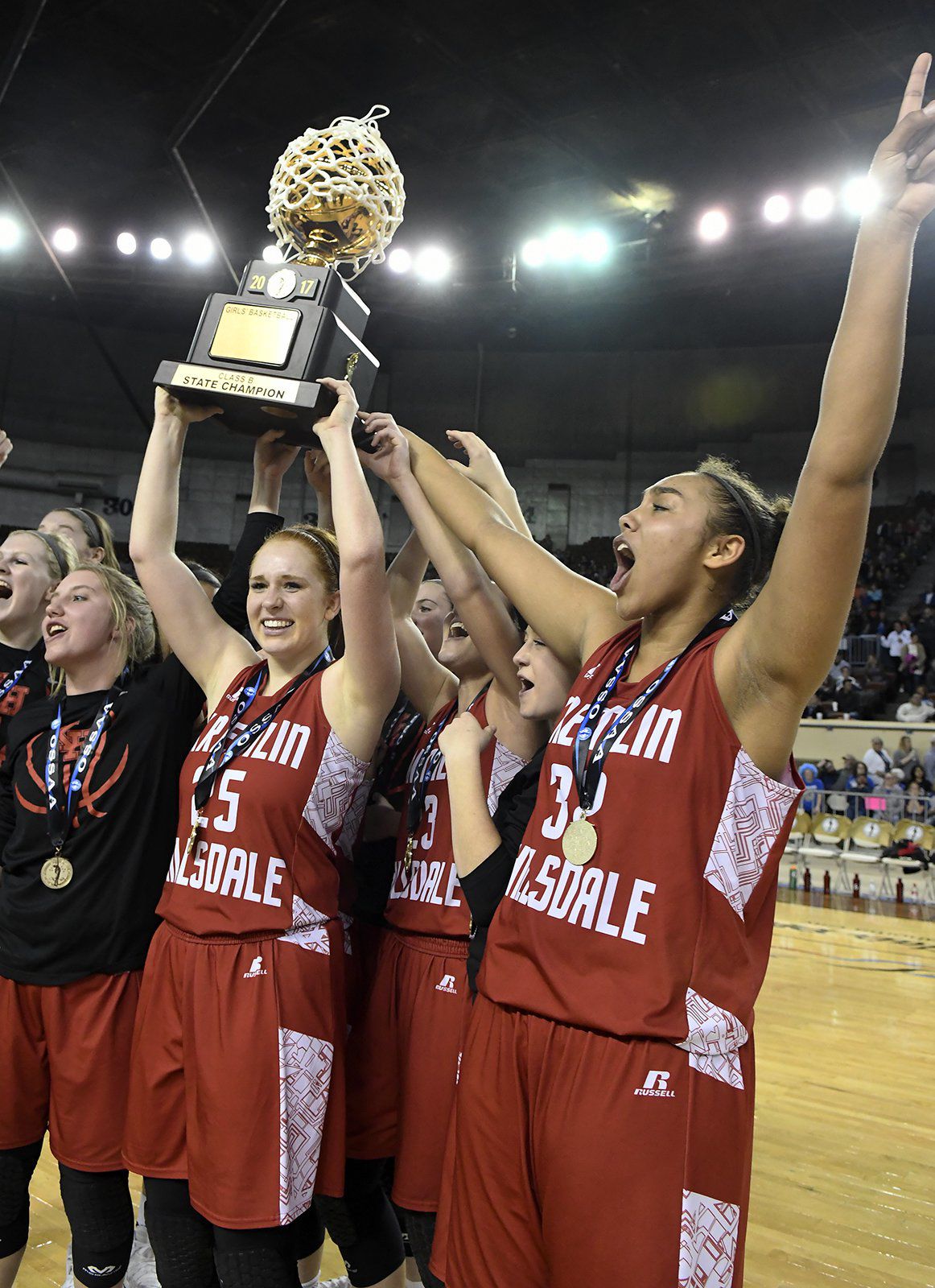 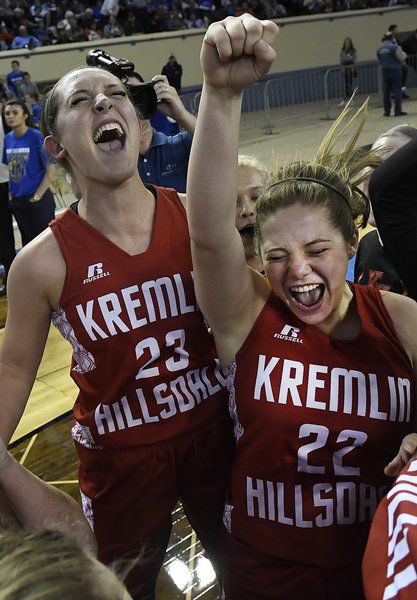 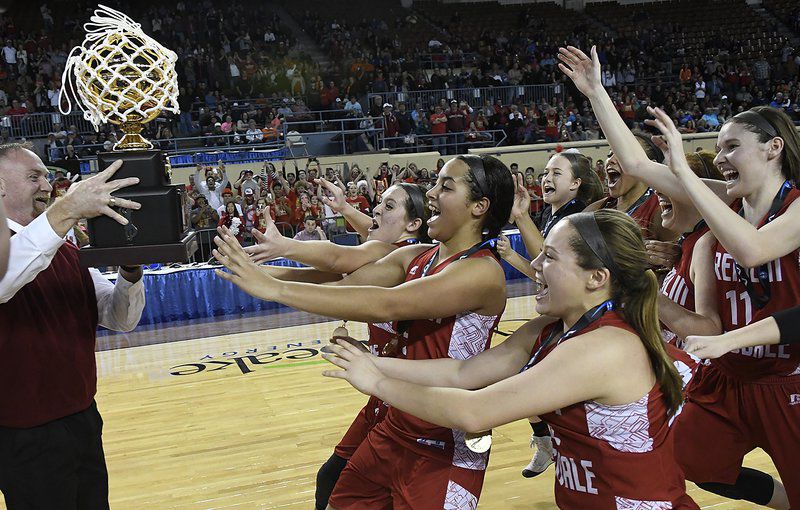 Members of the Kremlin-Hillsdale lady Broncs race to grab the state championship trophy following a 53-45 win over Lomega in the Class B state championship game Saturday March 4, 2017 at the State Fair Arena in Oklahoma City. (Billy Hefton / Enid News & Eagle) 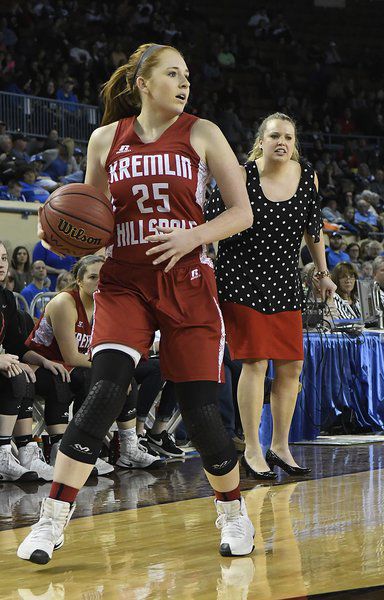 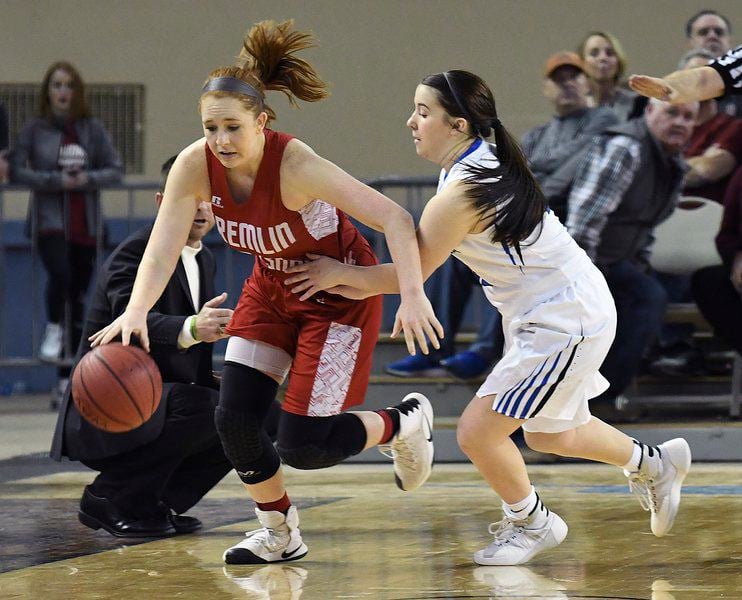 Members of the Kremlin-Hillsdale lady Broncs race to grab the state championship trophy following a 53-45 win over Lomega in the Class B state championship game Saturday March 4, 2017 at the State Fair Arena in Oklahoma City. (Billy Hefton / Enid News & Eagle)

Editor’s note: This is the second in our series looking back at some of the biggest area sports moments over the past decade. Kremlin-Hillsdale’s win over Lomega for the 2017 girls Class B state basketball title ranks right up there. We hope you enjoy reliving the memory with our story from the championship game. We also caught up with Tana Gragg late last week, who talked about coaching the team, the game and what it meant for her personally and her coaching family.

OKLAHOMA CITY — It only took one year in Class B for the No. 3 Kremlin-Hillsdale Lady Broncs to break through and claim the state championship.

Even more impressive, it came by defeating fellow Cherokee Strip Conference juggernaut No. 1 Lomega, in a 53-45 come-from-behind victory Saturday at the Big House in Oklahoma City.

“We had practiced for this as long as I can remember,” Kremlin-Hillsdale senior Kalli Rundle said. “(At the) beginning of the playoffs we knew we would be here, and Lomega would be who we were playing.”

Lomega and Kremlin-Hillsdale played each other twice during the regular season with the Lady Raiders winning both games. The third time was the charm for the Lady Broncs, who avenged their previous losses and thwarted the Lady Raiders’ attempt at a state title three-peat and a 14th total gold ball.

“As hard as it is to take some losses in the regular season, it’s so beneficial to us because we know them so well,” Lady Broncs head coach Tana Gragg said.

“We just wanted another shot,” Wasson said, “and we knew if we had one more shot to do it, we would give it all we had, and we did.”

The Lady Broncs spent the last three seasons in Class A being kept from the state tournament by the likes of Pond Creek-Hunter, Seiling or some other powerhouse. Their first trip to the Big House was everything the Lady Broncs ever imagined.

“It was nerve-racking, of course, for all of us,” Wasson said.

After grasping the gold ball for the first time in school history, virtually the entire town of Kremlin was waiting to emotionally embrace Gragg.

“It’s kind of like an out-of-body experience,” Gragg said. “You feel like you’re watching everybody else celebrate it because you’ve seen so many people celebrate it your entire life. So to get to experience it, it’s weird. It’s a very surreal feeling.”

Gragg is the daughter of legendary prep coach Randy Turney, and even his influence had a part in this historic victory.

“My dad’s defense that he had me run for six years,” Gragg said, “it is top notch. These are the perfect girls to run that.”

A layup by senior Rachel Yost sparked a 9-2 second quarter run for the Lady Raiders. Lomega went into halftime with a 28-23 lead on the strength of two more three-point baskets than the Lady Broncs. Both teams grabbed 12 rebounds, but a 10-4 turnover margin had Kremlin-Hillsdale in a disadvantage.

Both teams scored nine points to kept the Lady Raiders’ lead at five.

A layup and a couple free throws pulled the game within a single point in the early minutes of the fourth quarter. Lomega struck back with two straight baskets to make it a six-point game.

The Lady Broncs came back to take a 43-42 lead on two Wasson free throws with 3:15 remaining in the game. The Lady Broncs took advantage of a bad Lomega shooting spell from the three-point line during their 15-3 run to take over the game in its final minutes.

“We knew when they came out here they would crank,” Wasson said, “but when they started missing shots, we knew we would need to get the ball and take care of it and if they fouled us, knock down our free throws. It was a blessing for them to be missing so much ‘cause they usually are really good at threes.”

Most of the run occurred on the free throw line for the Lady Broncs, who shot 24-of-26 in the second half. Wasson shot a perfect 8-of-8, while Rundle was 11-of-14 from the line.

“We’ve been hitting clutch free throws for the last couple weeks in big games,” Gragg said. “So these girls knew we’ve done this before, let’s do it one more time.”

The girls capped their crowning achievement with a dog pile in the middle of the court.