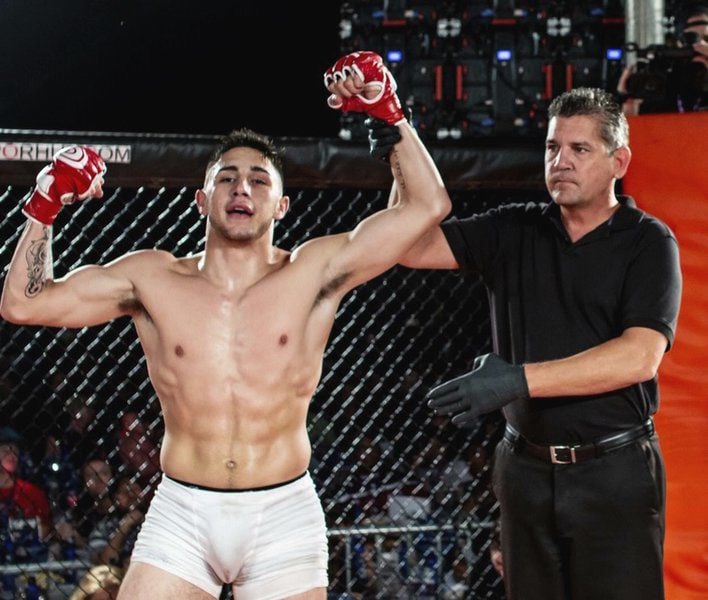 Enid native Austin Loza gets his hand raised after defeating BJ Gainer by first-round TKO in a mixed martial arts lightweight fight at Rage in the Cage on Aug. 8, 2018, in Oklahoma City. 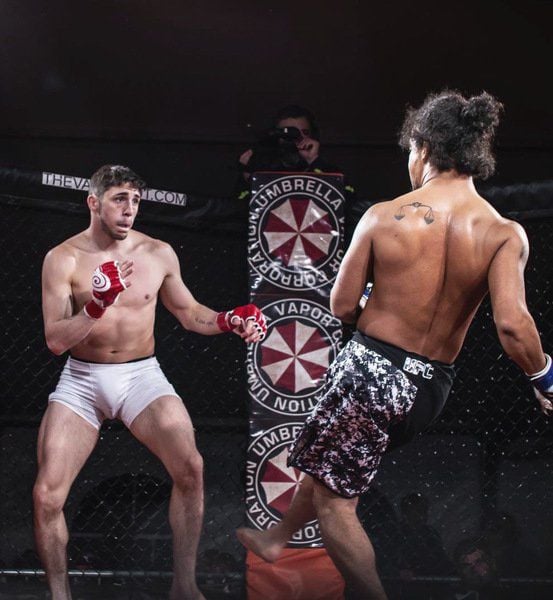 Enid native Austin Loza faces Deonn McKay in an amateur lightweight title fight at Rage in the Cage on March 22, 2019, in Oklahoma City. Loza won the bout by submission in Round 2. 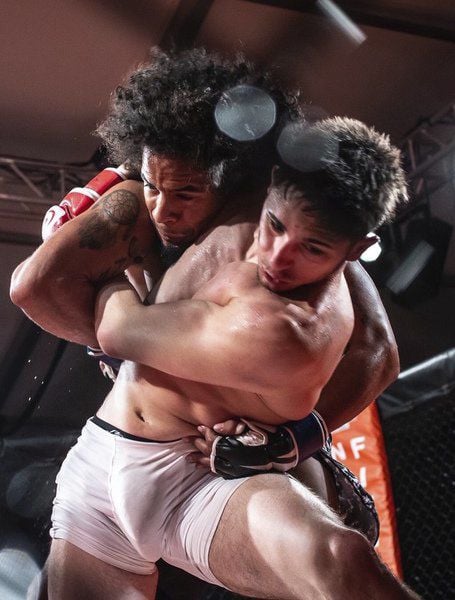 Enid native Austin Loza attempts to take down Deonn McKay in an amateur lightweight title fight at Rage in the Cage on March 22, 2019, in Oklahoma City. Loza won the bout by submission in Round 2.

Enid native Austin Loza gets his hand raised after defeating BJ Gainer by first-round TKO in a mixed martial arts lightweight fight at Rage in the Cage on Aug. 8, 2018, in Oklahoma City.

Enid native Austin Loza faces Deonn McKay in an amateur lightweight title fight at Rage in the Cage on March 22, 2019, in Oklahoma City. Loza won the bout by submission in Round 2.

Enid native Austin Loza attempts to take down Deonn McKay in an amateur lightweight title fight at Rage in the Cage on March 22, 2019, in Oklahoma City. Loza won the bout by submission in Round 2.

ENID, Okla. — Austin Loza first had aspirations of becoming a mixed martial arts fighter during the fall of his senior year at Enid High in 2016.

Now, nearly three years later, the former Plainsmen wrestler has fought in five amateur bouts and is looking to take the next step toward his dream career.

"I really want to go pro," he said. "I want to make it to the UFC (Ultimate Fighting Championship). I want to win a UFC belt."

During his time in Enid, Loza left his mark on the Plainsmen' wrestling program becoming the first Enid High wrester to reach the state tournament finals match since Justin Glenn in 2006.

Competing in the 152-pound weight class at the time, Loza fell short of the state title in a 3-1 loss to Payton Scott of Sand Springs.

After the narrow defeat and simultaneous end to his prep career, Loza started to weigh his options of what to pursue next. He'd already sworn into the National Guard, but couldn't decide between wrestling in college or going straight to training for MMA.

In the end, he pursued all three.

Loza took a year off from school to attend basic training and Advanced Individual Training (AIT) for the Guards. He then continued his education at Oklahoma City University where he joined the the Stars' wrestling program coached by Sam Hazewinkel, a four-time NCAA All-American at the University of Oklahoma. Loza will be a sophomore this upcoming season.

In the spring of 2018, Loza had his first amateur MMA fight in Oklahoma City as part of the 'Rage in the Cage' organization. He lost by submission in the first round.

Loza said his pre-fight nerves likely had an affect on his performance, adding he shut down early and resorted to mostly wrestling.

"It also taught me and opened my eyes up that I need to get into this a little deeper," he said. "I need to start doing more jujitsu and more kickboxing, etc."

To expand his arsenal, Loza booked a trip to California and got in touch with professional MMA fighter Mikey Gall, who competes in the UFC's welterweight division.

Gall agreed to train with Loza for a couple weeks, working on jujitsu and various grappling techniques.

"It was overall just a great experience," Loza said. "I think that put a lot more dog-in-the-fight for me. Now it gives me a little bit of an edge over people here in Oklahoma. I'm out there training around getting it from all sorts of angles and perspectives."

Despite living in OKC, Loza still returns to Enid where he often practices with the Plainsmen and head wrestling coach Trent Holland.

Loza said Holland was "kind of iffy" about him pursuing a career in MMA when he first mentioned it during his senior year. But now, he feels Holland is one of his biggest supporters, texting Loza asking how training is going and when his next fight is.

When Loza came home for Christmas break last December, he attended one of the Plainsmen's practices. While Holland was coaching his grapplers, he was also sharpening Loza's craft.

"It's always good to have that," Loza said. "I know when I go home I'm always going to have somebody that is there to teach me and make me better as a fighter, a wrestler and a person."

All the various drilling — from the West Coast to his home in Enid — paid off as Loza won his next three fights at 'Rage in the Cage' including a lightweight title bout. The first two wins were secured by TKO, while the title was clinched by a rear-naked-choke submission in Round 2.

This past June, Loza lost his first title defense by split decision to Don Doyle (6-1), one of the top-ranked amateur lightweights in Texas and the Southwest.

Loza plans to attempt to reclaim the title belt before next summer, but has also submitted an application to compete in the 'Cowboy Fight Series' an amateur MMA promotion operated by professional fighter Donald 'Cowboy' Cerrone.

Several professional shows and promoters will be in attendance and may offer contracts to the winners, which could present a vital opportunity for Loza if all goes right.

Nagel is a sports reporter for the Enid News & Eagle.

Have a question about this story? Do you see something we missed? Do you have a story idea for Cody? Send an email to cnagel@enidnews.com.