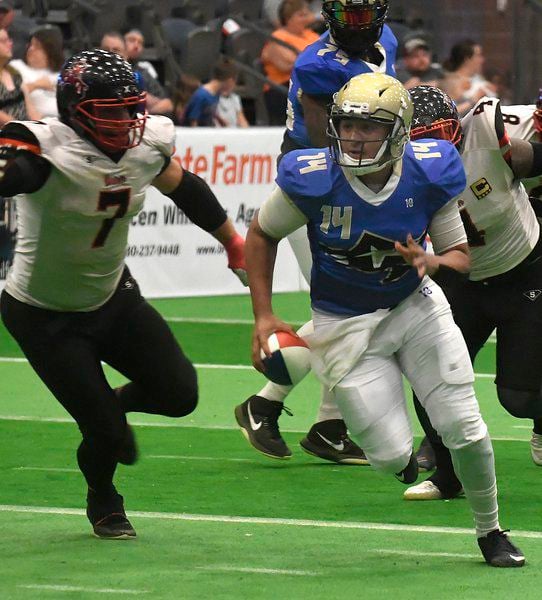 Flying Aces' RayJohn Ramsey scrambles out of the pocket against Sioux City June 15, 2019, at the Stride Bank Center. 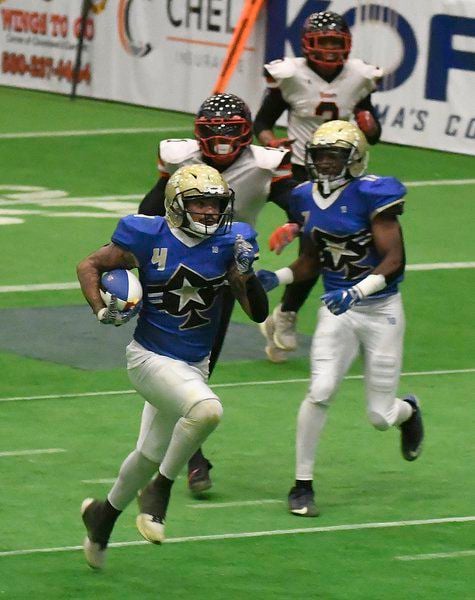 Flying Aces' RayJohn Ramsey scrambles out of the pocket against Sioux City June 15, 2019, at the Stride Bank Center.

ENID, Okla. — The Oklahoma Flying Aces indoor professional team remains hopeful that there will still be a season and fans can cheer them on at the Stride Bank Center.

Flying Aces head coach and managing partner Richard Davis said the league (Champions Indoor Football) is "universal across the board" in its desire to see what can be done to get games played, even if that likely means a reduced season.

"I would guess the best case scenario would be starting mid-June to late-June and into July and August," Davis said.

The season originally was to begin in mid-April but has been on hold due to the limitations and restrictions that have been put in place due to the coronavirus pandemic.

"We just decided there was no rush," he said. "We have dates. We've worked with our building." Davis said he is in contact almost daily with Stride Bank Center and management has dates on hold. He added the parties have also gotten together to discuss developing a seating structure that would comply with social-distancing parameters if such continue to remain in place.

Recently, Oklahoma Gov. Kevin Stitt announced plans to begin reopening the state to activities that were halted or severely restricted due to COVID-19. The city of Enid has had similar limitations that currently remain in effect through April 30, however an announcement is expected by the city early this week on whether such limitations will be lifted or modified.

Davis said he has remained in contact with Flying Aces players and believes most, if the season were started, would return with the team.

"We told all the players to be patient, but that we understand if they have to move on with their lives," he said. "Everyone wants to play and most of our guys have hung in there and told me, 'Hey, let us know, we'll roll back in.'"

He said they stay in contact through a group messaging app. "We're checking on each other, making sure everybody is safe and making sure all of their families are taken care of," Davis said.

If the season starts before July, it looks like all seven current CIF franchises would able to take the field with the possible exception of the West Texas Warriors expansion franchise due to its county-owned arena being shutdown at least until July.

The Flying Aces are coming off a 2-10 campaign in their inaugural season in 2019, with their only wins coming via forfeit. Davis said the current events have been particularly frustrating in that he and the team have been anxious to get back on the field and put last season's record behind them.

"We could have brought some veterans in here and probably won a few games, but we felt we had a long-term plan and, bang, out of nowhere, this thing happens."

Still, Davis believes the franchise may have scored its most important wins last season within the community, a view supported by increased season ticket sales, increased group sales and interest being higher in partnering for promotions.

"I feel like our presence was starting to make inroads last season," he said. "Last year we did over 200 appearances with our players." Davis said that ran the gamut from everything from reading to school kids, making various visits around town and appearances at local businesses."

"I hate that we lost that momentum," he said. "We were really on pace to break through and find our stride. This happening and when it happened and the way it happened was pretty devastating."

Like all businesses impacted during this period, the Flying Aces have had to do some serious belt-tightening to control costs. Davis hasn't taken a paycheck in three months.

However, he said the feedback he gets around Enid has been overwhelmingly positive and keeps him going and enthusiastic for what could still lie ahead.

"I've had a year to live in this community now and we've not run into a single person that didn't tell us they had a great time at our games and how much they appreciated it and would come again. I'm really proud of that."

Davis said the Flying Aces, should the season begin in the near future, will be proactive in getting fans back to the games for their second season, including reduced ticket prices.

"We're looking at everything," he said. "If we come back are we going to have to do some things on our ticket pricing to make it attractive? Yes, we are.

"I think one thing this has done is given everyone an opportunity to figure out what matters and I think in our community we can matter."