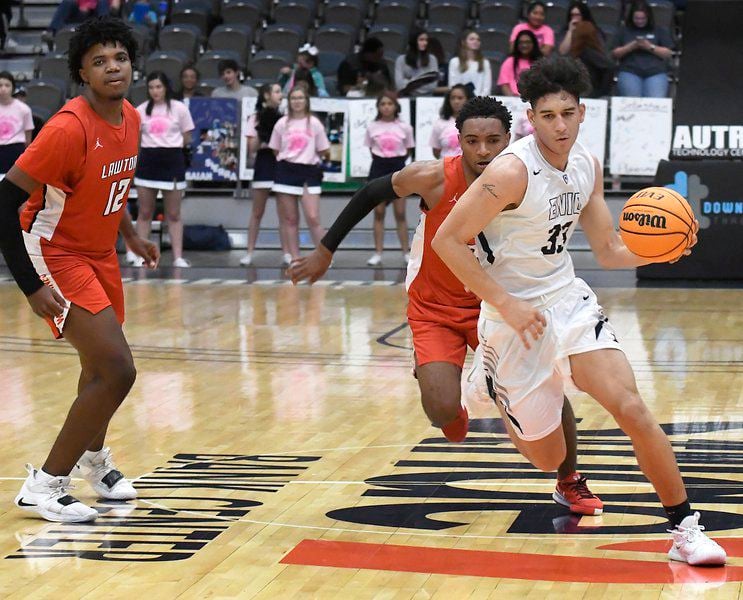 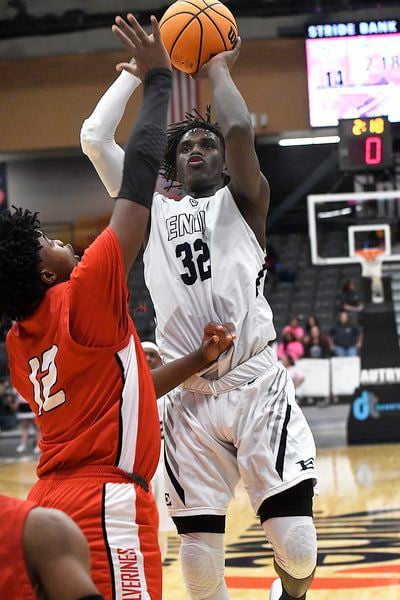 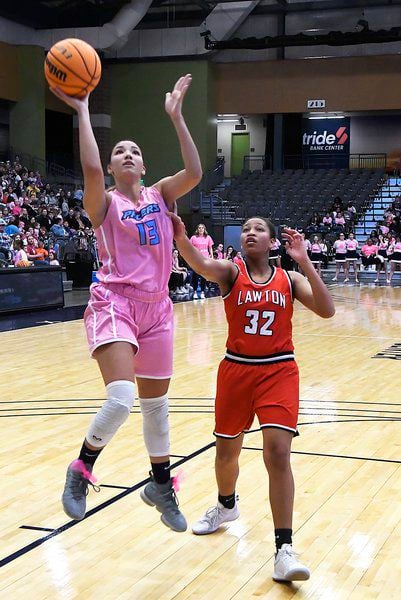 Enid’s Lanie Goins gets by Lawton’s Nina Perry for a basket Saturday, Feb. 8, 2020, at the Stride Bank Center. 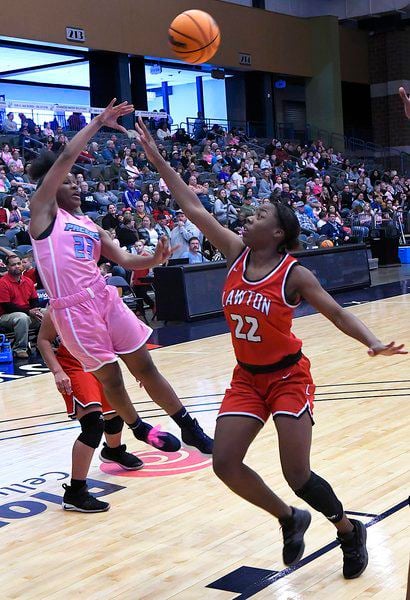 Enid’s Lanie Goins gets by Lawton’s Nina Perry for a basket Saturday, Feb. 8, 2020, at the Stride Bank Center.

First, the Pacers (6-14) used a fourth-quarter rally to break their six-game losing streak with a 50-47 win over Lawton (3-15). That victory also gave Enid the satisfaction of finally getting over the hump during close games.

“The thing I’m most proud of these girls tonight is this is the first close game we’ve won all year,” Pacers head coach Nina Gregory said. “We’ve been in close games before and we let them get away from us.”

Gregory pointed to games like the one against Putnam City earlier in the season, the one against then-No. 19 Altus (Class 5A) in the Woodward tournament and against OKC Storm on Jan. 14. The Pacers had battled those teams almost down to the final second, only to fall in both.

“We’ve had quite a few of those three- or five-point games and hadn’t been able to come out on top,” she said. “I think this is a huge accomplishment for us this year, and maybe (we’re) kind of turning the corner a little bit because we were able to finish, which we haven’t done yet.”

Enid seemed to have command of the game earlier. The defense intercepted two Lawton passes in the offensive zone and converted the turnover into points, helping Enid secure a 16-11 lead after the first quarter.

But turnovers came back to bite the Pacers. In the second quarter, Lawton scored 10 points off of Enid turnovers. Lawton was able to tie the game at 17-17 thanks to turnovers on three consecutive Enid possessions.

With under two minutes to play in the first half, the Pacers held a one-point lead. But an Enid turnover allowed the Lady Wolverines to usurp the Pacers. Lawton’s Dalena Fisher scored a layup off the turnover and secured the and-one shot, giving Lawton a three-point lead at halftime.

“Basketball is a game of runs,” Gregory said. “You go up and you go down. The thing about that is you have to learn to stay composed when those things happen.”

Once the second half started, Enid went straight to work in tying the score. Down four points, sophomore Tamira Lewis drew a foul on a three-point attempt and drained all three free throws to cut the lead to three. Then junior Claire Dodds drove to the net for the layup, drawing a foul on the way there, and sunk the ensuing free throw, tying the game 32-32.

Enid went on a 12-point run to pull ahead by four points. But Lawton scored on three straight possessions to tie the game 38-38 by third quarter’s end.

The Lady Wolverines took a two-point lead to start the fourth quarter. Sophomore Lanie Goins’ field goal and Dodd’s ensuing three-pointer then gave Enid a three-point lead. Dodds ended her night as the leading scorer with 16 points, while Goins finished with 10.

Mya Edwards, who finished with 11, came in clutch for the Pacers in the final minutes of the fourth quarter. The junior sunk three of her final four free throw shots to give Enid a 48-45 lead.

“They (Lawton) showed what I’ve been trying to tell my guys all along,” Plainsmen head coach Curtis Foster said. “You’ve got to establish … inside before we just come down and continuously shoot threes.”

Three-pointers helped Enid early as the Plainsmen fell back 10 points in the first quarter. Sophomore Cam Mathis drained a three-pointer to stop an 11-point run by Lawton. Senior Carter Owens then hit a three-pointer to cut the lead to six points. Enid trailed by five points at quarter’s end.

But once the second quarter began, Lawton’s balanced offense racked up points inside and outside the three-point arc. The Wolverines went on runs of seven and eight points, respectively, before taking a 12-point lead at halftime.

The Plainsmen offense struggled to keep pace with Lawton and struggled to not only draw fouls, but hit their shots at the free-throw line. Enid finished going 6 of 13 from the line.

Saturday night’s loss extended Enid’s losing streak to six games. The Plainsmen will have to finish the remaining three games on the road, two of which come against ranked opponents.

The Pacers and Plainsmen will play at Ponca City on Tuesday.