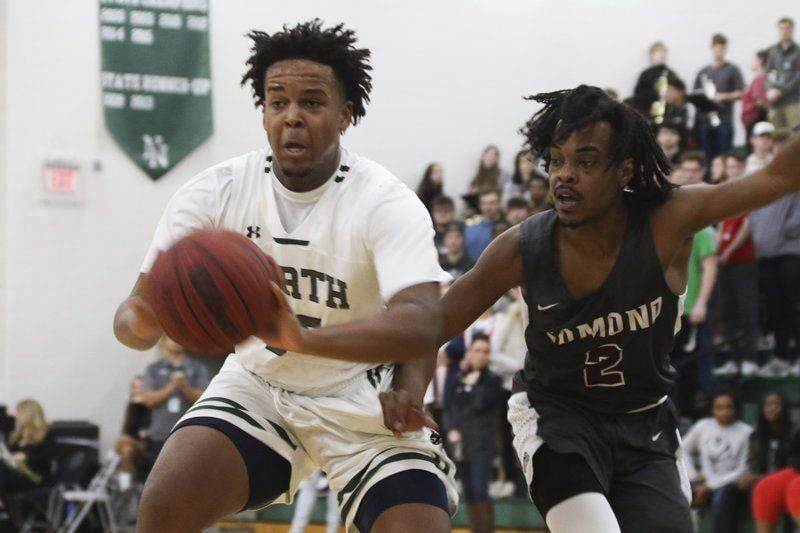 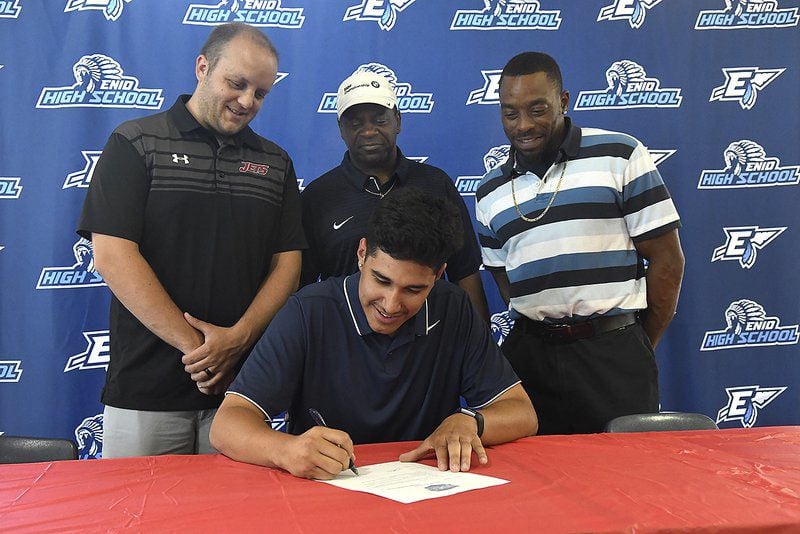 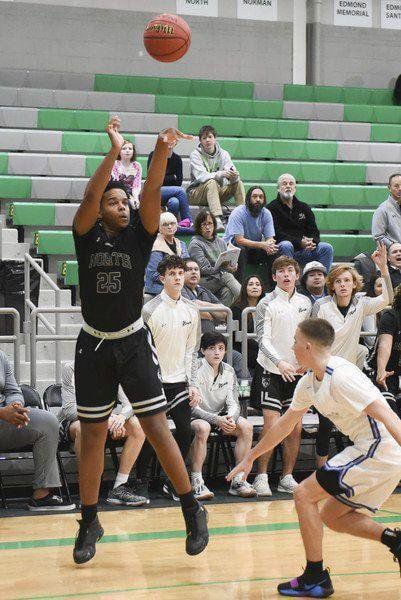 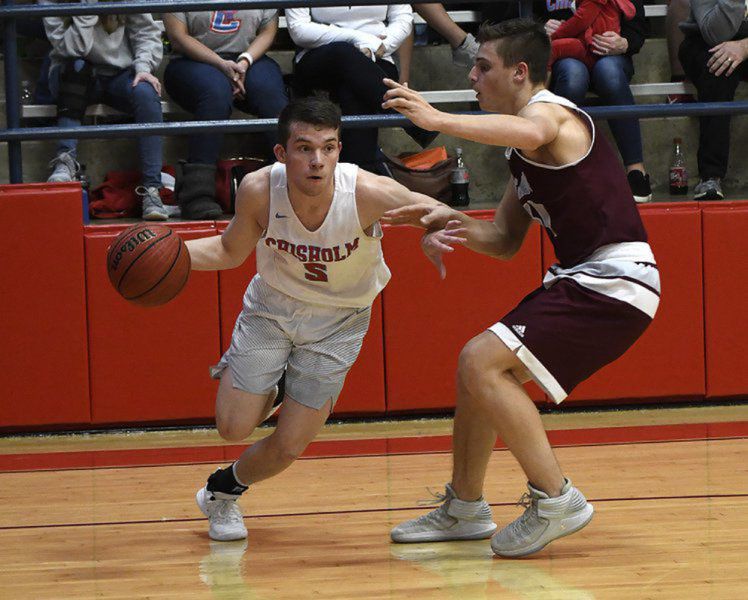 ENID, Okla. — During his first season as head coach of the Northern Oklahoma College Enid men's basketball program, Aaron Butcher spent numerous hours on the recruiting trail searching for the next group of Jets to join his squad.

In total, 15 players — including a pair of local prospects — signed to the 2019 class, which was announced this week.

"I, along with Coach (Chris) Gerber, am very excited about the class that we have put together," Butcher said in a release. "It is a large class, and one we feel checks all of the boxes. We can't wait to get them on campus in the fall and get to work."

Six of the 15 signees are out-of-staters, two of which come from Indiana where Butcher previously coached and grew up. The newest additions plus two redshirt freshman — Zach McDermott and Tyrese Sanders — give Butcher and assistant coach Gerber plenty of youth to develop.

Here is a closer look at each of the 2019 signees:

Campbell graduated from Nettleton High where he helped lead the Raiders to a Class 5A State Tournament appearance each of his last three seasons.

"(Campbell) possesses a lot of characteristics that 4-year coaches look for," Butcher said in a release. "I have no doubt that there will be a lot of coaches coming through to see (him) during his time in Enid."

Childers, one of the two local signees, graduated from Chisholm, where he received several awards for his production throughout his senior campaign. Along with being voted to the Enid News & Eagle All-Northwest Oklahoma first team, Childers was named an Oklahoma Coaches Association All-Star for Class 3A and was also named All-89er Conference.

"Kolten is a high-character kid who, in addition to great success on the basketball court, has had great success in the classroom," Butcher said. "He is a high IQ player who can really shoot it. Those traits will help him be successful here."

Cockrell comes from a championship background having helped Tulsa Memorial to three straight Class 5A State titles. At 6-feet-9-inches, Cockrell has the potential to help diminish the lack of size NOC Enid had last season.

"(Cockrell) has a chance to be a force inside," Butcher said. "He continued to show improvement throughout his high school career. I think he is just scratching the surface of how good he can be. We can't wait to continue to develop him and see just how good he can be."

Crutchfield, a Norman North graduate, was a member of the Central Oklahoma All-Conference team this past season. He was the first commitment of the 2019 class. Crutchfield's older brother, Jalen, is a sophomore at Stetson University, a NCAA Division I program in DeLand, Fla.

"We identified (Crutchfield) early as someone who possesses the characteristics that we want in this program," Butcher said. "He is a hard worker, possesses a great basketball IQ, has a high motor and does all the little things you want him to do. He comes from a basketball family and understands what it takes to be successful at this level."

Ranked as the No. 15 recruit in Oklahoma by Prep Hoops, Garrett is the highest rated of the eight in-staters for the Jets' 2019 class. Garrett graduated from John Marshall High where he helped guide the Bears to the Class 4A State Tournament semifinals.

"He can play multiple positions and gives you versatility on both ends of the floor," Butcher said of Garrett. "He is another kid in this class that we feel is just scratching the surface of how good he can be."

One of two signees from Butchers home state of Indiana, Gatewood graduated from Mt. Vernon High as an all-conference selection. Gatewood spent the past school year at Huntington Prep, a distinguished basketball-focused college preparatory in West Virginia.

"We are really excited that (Gatewood) is joining the Jets family next fall," Butcher said. "(He) is a big time athlete who can really shoot. His ability to stretch the defense and score it off the bounce will make him a tough cover."

A Tulsa Union graduate, Harvey averaged 11 points and seven rebounds per game for the Redskins. Union advanced to the Class 6A State Tournament in Harvey's first three seasons.

"His ability to shoot it from the perimeter is continuing to improve, and his size and athleticism allow him to guard multiple positions," Butcher said.

"He is a good kid who has a good work ethic," Butcher said. "He adds to the depth at the guard spots and will push his teammates with the way he competes."

NOC Enid assistant Chris Gerber played a key role in getting O'Brien to sign as a Jet. Gerber, who graduated from Conway Springs High in Kansas, was coached by O'Brien's dad, James, throughout his high school career.

Andrew O'Brien graduated from Halstead High where he helped the Dragons win the Class 3A State Championship his junior year.

The string of Lazenbys from Glencoe to Enid continues as Cale joins the Jets' program. The youngest of his six siblings, Cale follows the footsteps of his brothers Ty and John III as well as his sister Chelsea as NOC Enid Jets. Ty is now a graduate transfer at Oral Roberts University after one season at the University of Oklahoma. Chelsea played a key role in the Lady Jets' Region II title last season as a senior.

Okeke, a graduate of Bolingbrook High was the last piece added to the Jets' 2019 class.

"We had one scholarship left and wanted to make sure we used it on the right person," Butcher said. "When I first saw film on (Okeke), there was a ton of positive that jumped out to me."

Perkins is a transfer from Hutchinson Community College in Kansas where he appeared in 31 of the Blue Dragons' 34 games. Perkins scored eight points in 19 minutes played against NOC Enid on Nov. 20, 2019.

Butcher anticipates Perkins to have an "immediate impact" for the Jets.

Stamps, the second of the two Hoosier State signees, graduated from Indianapolis Howe High where he helped the Hornets to a Class 4A (largest in Indiana) State Championship as a junior.

The hometown signee, Rodriguez graduated from Enid High where he averaged just over 13 points per game and was named All-Big 10 Oklahoma Conference.

"(Rodriguez) is a great kid who can really shoot the ball," Butcher said. "He is a great communicator on the floor and should elevate our program."

Wiggins, a graduate of Northwest Classen helped the Knights reach the Class 5A State Tournament semifinals this past season.

"He is a strong player who can get to the rim and finish," Butcher said. "He did a little bit of everything in his high school career."

Nagel is a sports reporter for the Enid News & Eagle. He can be reached at cnagel@enidnews.com.

ENID -The funeral service for William Tyler Woods, infant son of Samantha Henning and Michael Woods will be 10:00AM Saturday, May 30, 2020, in the Henninger-HInson Chapel. Burial will follow in Memorial Park Cemetery.