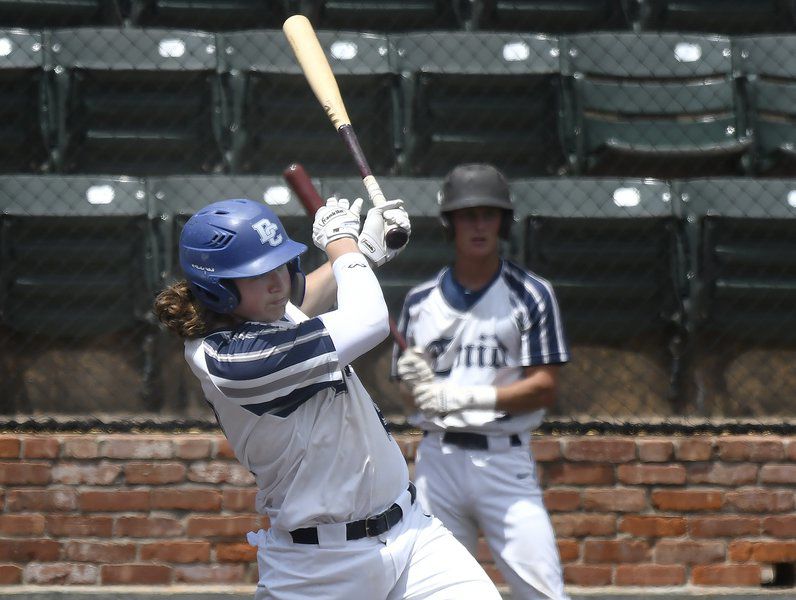 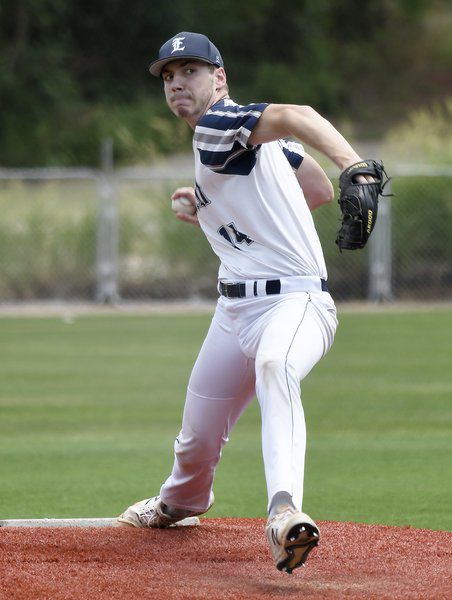 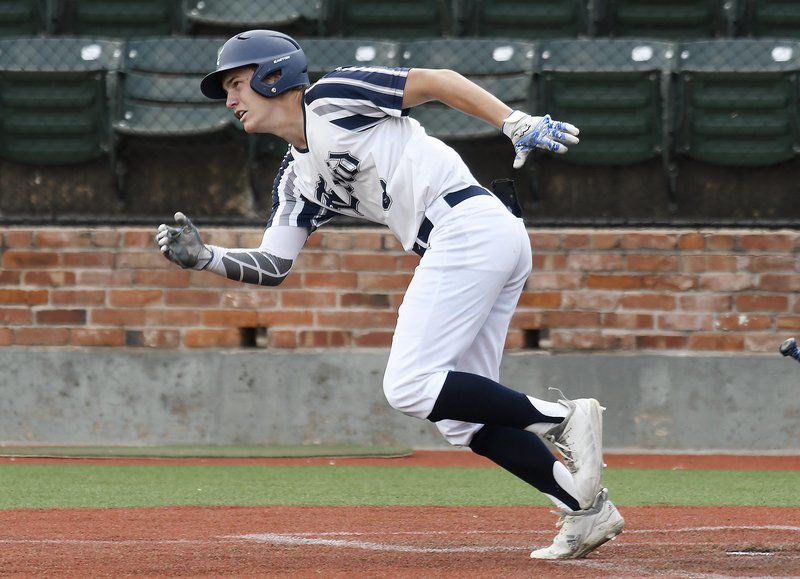 Enid Majors’ Connor Gore heads to first with a base hit against the Shockers Black during the Connie Mack Regional Qualifier at David Allen Memorial Ballpark Saturday, June 20, 2020. 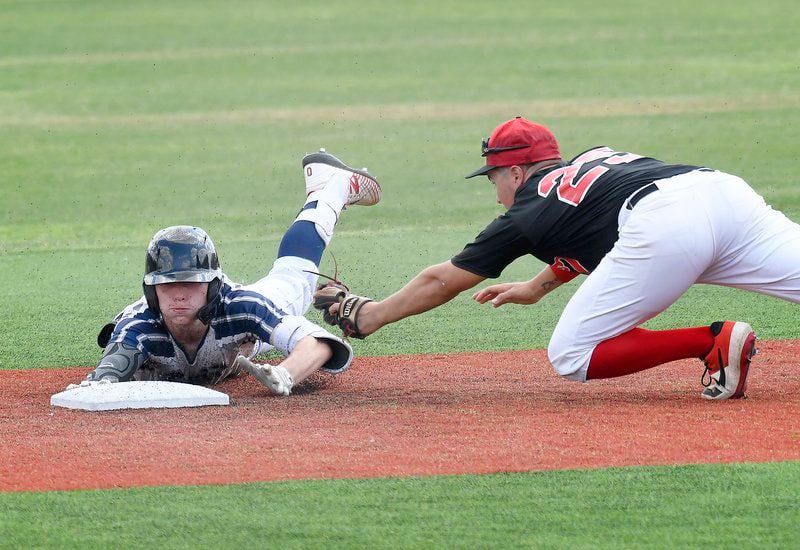 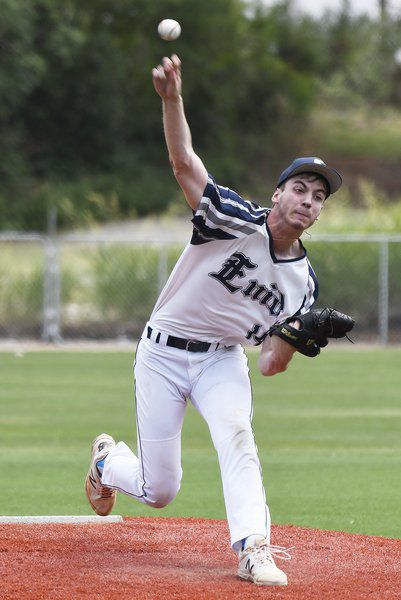 Enid Majors’ Connor Gore heads to first with a base hit against the Shockers Black during the Connie Mack Regional Qualifier at David Allen Memorial Ballpark Saturday, June 20, 2020.

ENID, Okla. — Enid Majors pitcher Jacob Bookout wasn't too happy after giving up four walks and an RBI double by Kellen Henderson against the Shockers Black on Saturday at the Connie Mack regional qualifier at David Allen Memorial Ballpark.

"His first two innings were a little shaky,'' said Majors coach Kris Webb. "He got a little upset at himself and developed a little killer mentality.''

Bookout, in his last three innings, struck out five, walked only one and did not allow a run in the Majors' 8-1 win. The Majors, 3-0 in Pool A, can punch their ticket to Sunday's 7 p.m. championship game if they can beat the OK Drillers at 11:30 Sunday morning.

Bookout agreed with Webb that his turnaround was more mental than physical.

"It was nothing special technically,'' he said. "It was more of a mental block. I just [dug] down and reached back and found it. I just stopped holding back a little bit. I was a little bit irritated. I was trying to find it. I didn't settle and I got loose.''

The five innings was Bookout's longest outing so far this summer. He had gone three innings in his other two starts.

"My arm was in a lot better shape than it was in the past two starts,'' he said. "It's easier to pitch when you have a lead.''

The Majors broke a 1-1 tie with three runs in the second on just two hits — a single by Piercen McElyea and a two-RBI double off the left field wall by Conner Gore. Drake Kerr's sac fly scored Braedyn Summer, who had been hit by a pitch.

Every starter reached base as the Majors took advantage of eight walks, five errors and three hit batsmen.

"I couldn't ask for a better team,'' said Bookout, who graduated recently from Oklahoma Christian School. "They are good guys and really backed me up.''

Bookout is the son of former University of Oklahoma slugger Casey Bookout and the nephew of former Sooner basketball and track star Kevin, but has signed with arch-rival Oklahoma State.

The Majors scored a run in the first when Summer scored off an error. They added a run in the fifth when Donnie Johnson was hit by a pitch, stole second and third and came home on a passed ball. They finished the game on the time limit in the sixth on bases-loaded walks to Jared Guy and Blake Scott. Titan Stephens hustled to score from second on Scott's walk.

"The offense took care of us,'' Webb said. "We were patient at the plate. Their pitchers were all over the plate early and they kicked a few balls. We were fortunate to score some runs.''

The Enid Plainsmen were feeling a little urgency against Cherry Creek, Colo., in a Pool B game. They trailed 4-3 in the top of the sixth with the two-hour time limit staring them in the face.

The Plainsmen answered with three runs while reliever Tyler Holland held down Cherry Creek in the bottom half to complete a scoreless two-inning stint.

Enid had only one hit through the first five innings, but it did what it had to in the sixth. Maddux Mayberry led off with a walk, stole second and scored after Dallas Goodpasture was hit by a pitch, a sacrifice by Reece Slater and a perfectly-timed single over a drawn-in infield by Kade Goeke. Garrett Shull's sac fly brought in Goodpasture to make it 5-4 and Jake McCool singled in Goeke with an insurance run.

"That was a good win for our program,'' said Plainsmen coach Brad Gore. "The guys hung in and hung in. We were going the wrong direction, but these guys kept fighting and scratching. They don't give up. That's the good thing about this group. We had some really good pitching today.''

Gore told his team "there wasn't going to be a seventh inning, so you better get after it.''

"We had some quality at-bats in the last inning. It was a real good job by our guys playing team baseball," he said.

Cherry Creek, though, answered back with three runs in the second, taking advantage of an error that brought in two runs. Trevor Moore reached on an error in the third and scored on a single by Casey Wood.

Shull cut the lead to 4-3 in the fifth when he walked, went to second on a walk to McCool, to third on Brooks' sacrifice and scored on an overthrow to third on a pickoff attempt.

Holland did not allow a hit after coming in for starter Blake Priest in the fifth. He struck out two and got Moore to ground out to end the game in the sixth with a runner on second.

Priest, in his four innings, allowed five hits while striking out four and walking one.

"I felt like I was letting myself go that last inning,'' Holland said. "My arm was feeling really good. I was throwing my fastball and curve for strikes and that really helped me out. I was really pumped up after we got the lead.''

The Majors, 2-1 in the tournament, are scheduled to play Shockers Red at 9 a.m. Sunday. Shockers Red and MVP Seng were playing for the pool lead late Saturday. If Seng MVP won, they would clinch the pool title.