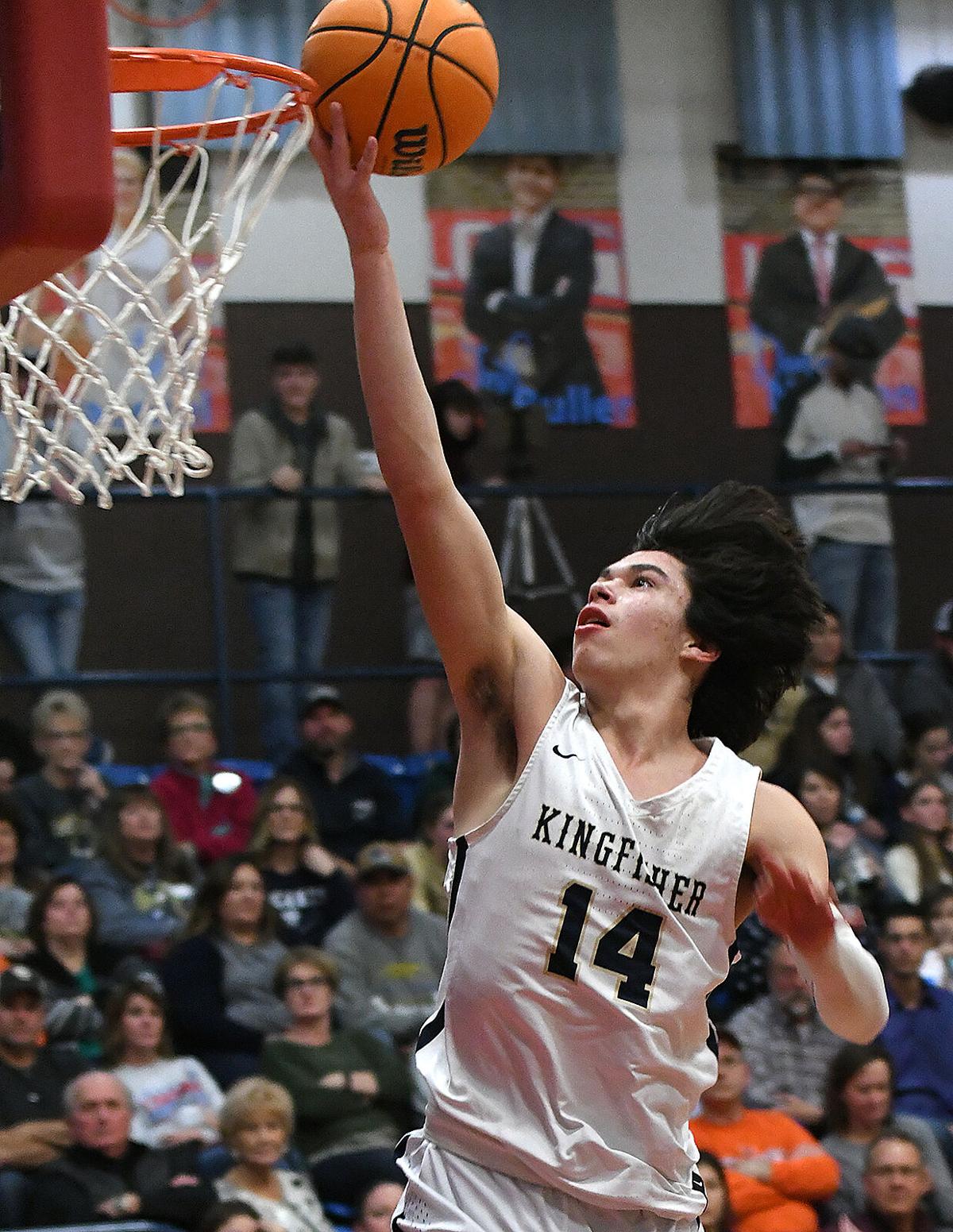 Kingfisher’s Bijan Cortes basket against Perry during the finals of the 2020 Wheat Capital Classic at Chisholm High School. 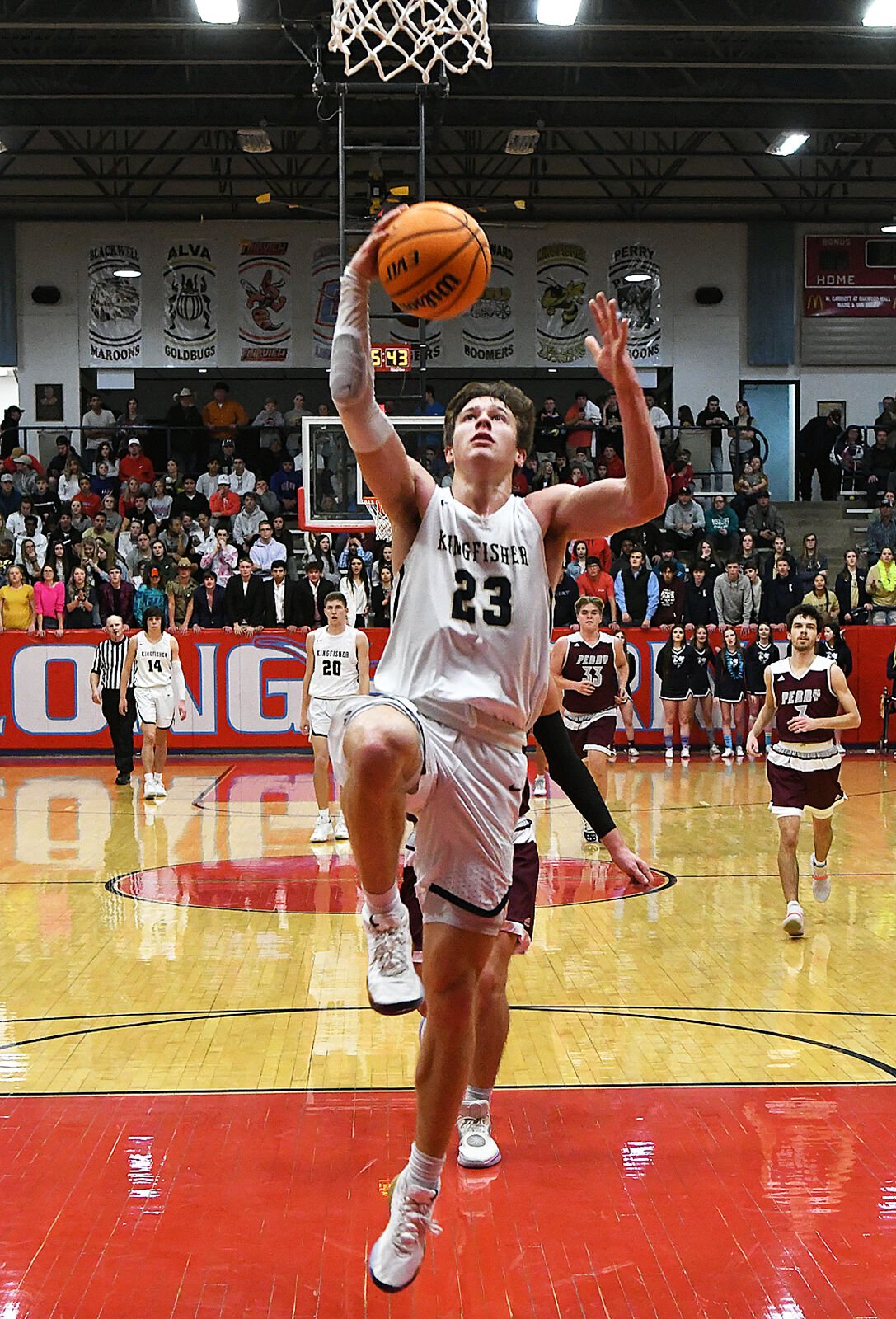 Kingfisher’s Matthew Stone scores a fast-break basket against Perry during the finals of the 2020 Wheat Capital Classic at Chisholm High School.

Kingfisher’s Bijan Cortes basket against Perry during the finals of the 2020 Wheat Capital Classic at Chisholm High School.

Kingfisher’s Matthew Stone scores a fast-break basket against Perry during the finals of the 2020 Wheat Capital Classic at Chisholm High School.

KINGFISHER, Okla. — Kingfisher’s boys, 6-1 and ranked No. 1 in Class 4A, will be looking to continue their dominance of the Wheat Capital Basketball Tournament, which tips off its 52nd edition Thursday at Chisholm’s Paul Outhier Fieldhouse.

The Yellowjackets have won six of the last seven Wheat Capitals. They did not play in the 2019 edition because they were playing in the Tournament of Champions in Tulsa.

Kingfisher beat Perry, 68-49 in last year’s finals behind 35 points from tournament MVP Bijan Cortes and 21 points from Matthew Stone, both of whom return. Cortes has signed with the University of Oklahoma. Stone is headed to North Texas.

“It’s just neat for the kids,’’ said Kingfisher coach Jared Reese after the tournament last season. “It’s kind of become a great tradition to play here. Some of these kids were up in the stands as middle school kids. Now, they’re getting to experience it. It’s a great environment at the Wheat Capital. Really unlike any other.’’

The Yellowjackets will face 0-6 Blackwell in the first round at 8 p.m. The Maroons are averaging only 20.7 points a game this season.

Kingfisher’s lone loss was to No. 1 6A Edmond Memorial, 33-27 in the finals of the Edmond Open last month. The Yellowjackets have won their six games by a margin of 31.6 points per game.

Kingfisher has won the Wheat Capital 11 times, including the inaugural tournament in 1970. Blackwell won the tournament in 2000 and 2007.

Kingfisher’s girls, 7-0 and ranked No. 7 in 4A, are the top seed in the girls field which includes four other ranked teams.

The Lady Jackets, coached by ex-Enid High coach Gerrett Spears, lost to Alva, 65-52 in last year’s finals. They will face the home-school Oklahoma City Knights at 9:30 a.m. in the first round. The Knights are coming off a 40-17 loss to Wynnewood.

Kingfisher has had a smothering defense, allowing only 26.7 points per game. Only two opponents — Elgin (64-30) and Altus (61-33) — have scored more than 30 points against the Lady Jackets. Kingfisher beat Woodward, 40-26 in the Compass Winter Classic finals at Woodward last month behind 17 points from Allison Green.

The Lady Jackets won their only Wheat Capital Tournament in 2009.

In other girls first round games on Thursday:

In other boys games: