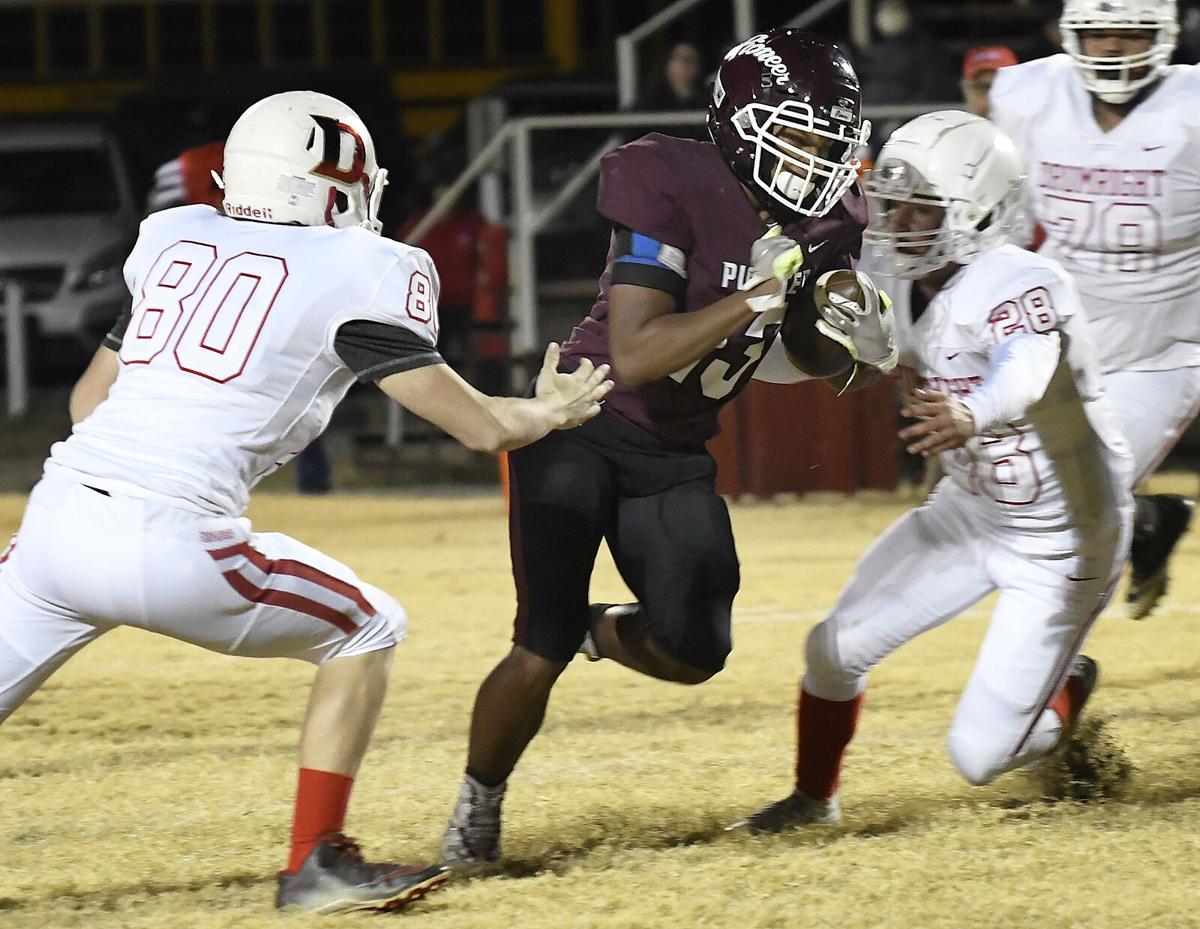 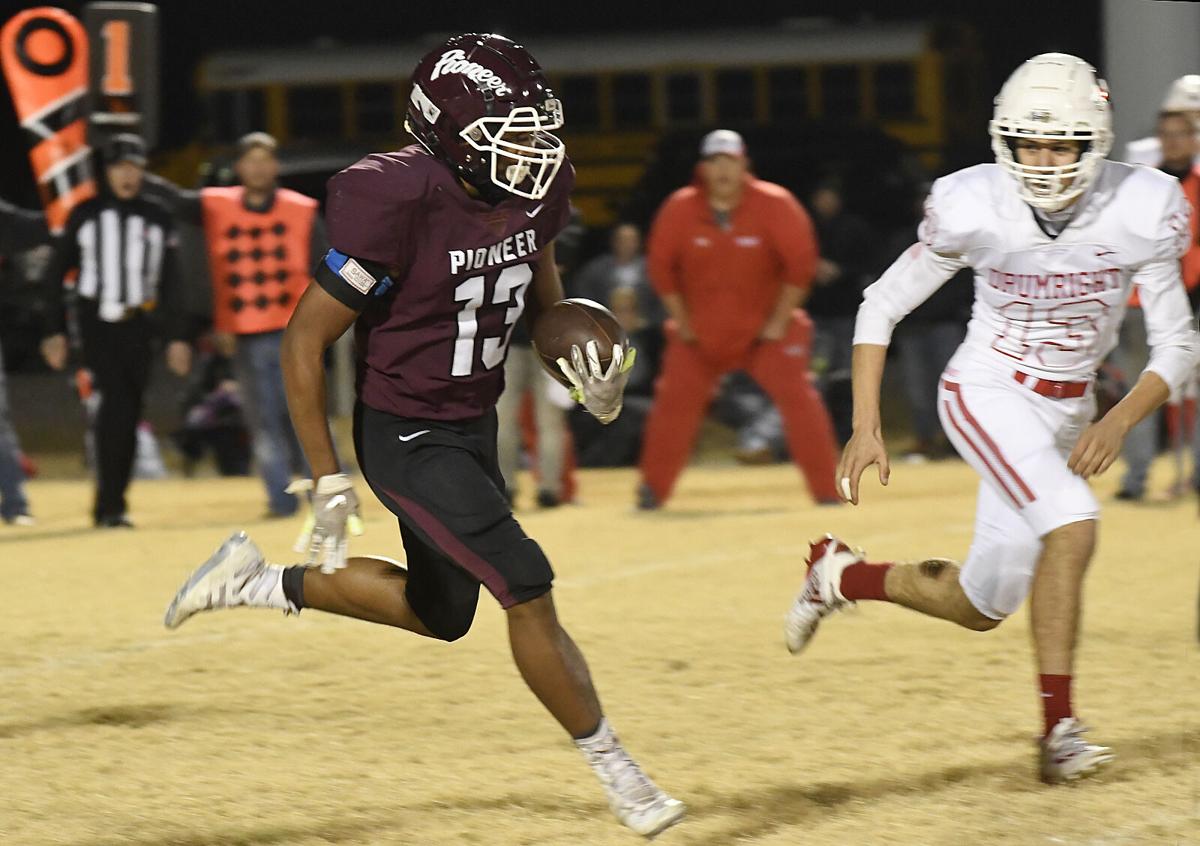 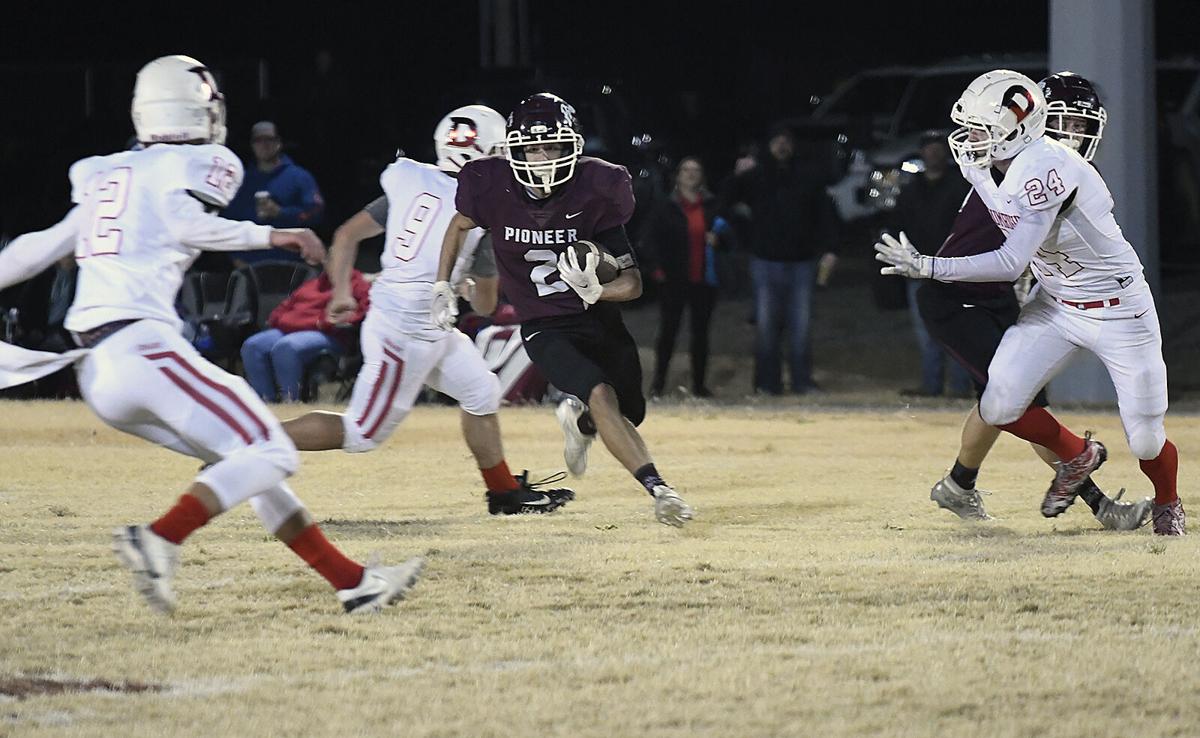 Pioneer’s Leyton Parker returns a punt for a touchdown against Drumright during the second round of the state playoffs Nov. 20 at Pioneer High School. (Billy Hefton / Enid News & Eagle) 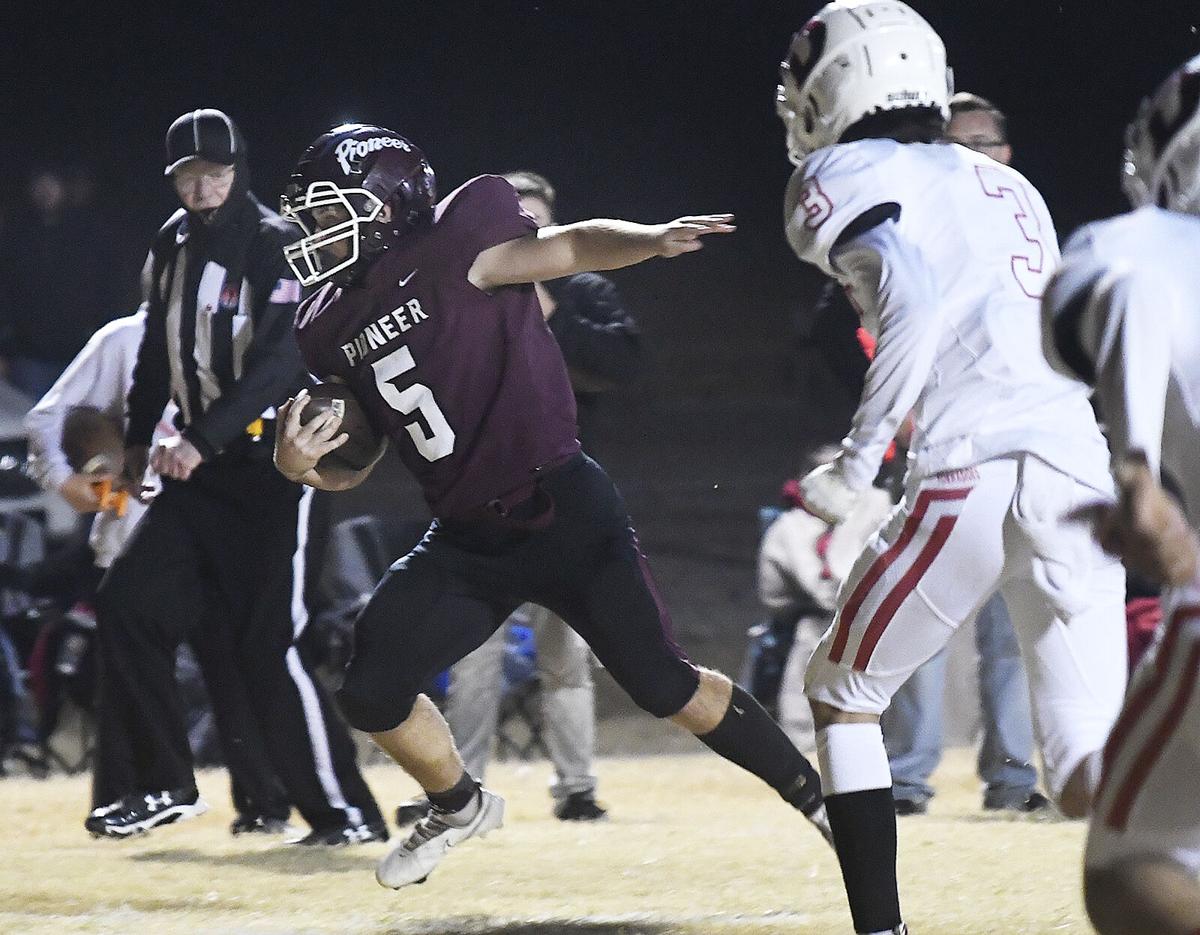 Pioneer's Caden Humphries keeps his balance to score a touchdown against Drumright during the second round of the state playoffs Friday, November 20, 2020 at Pioneer High School. (Billy Hefton / Enid News & Eagle) 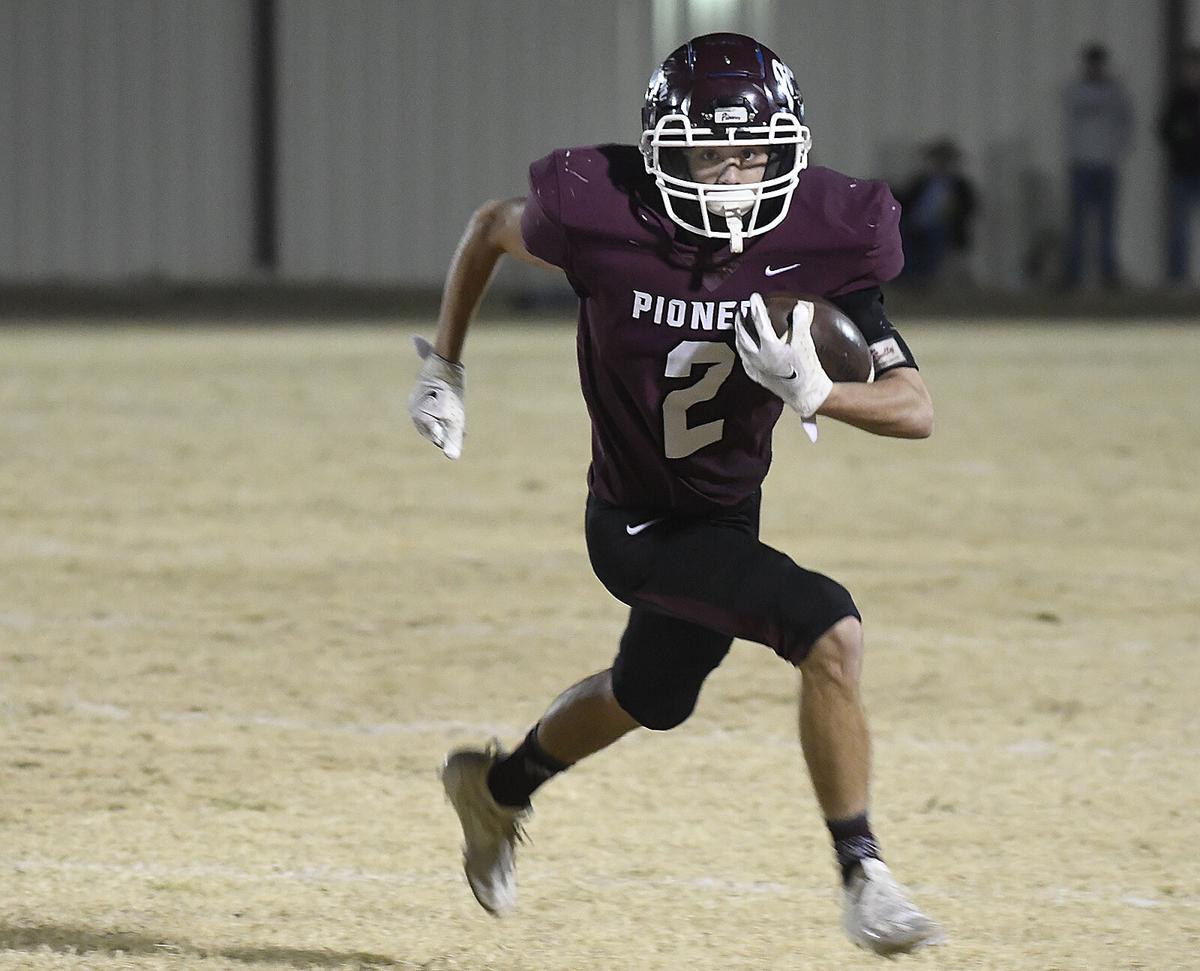 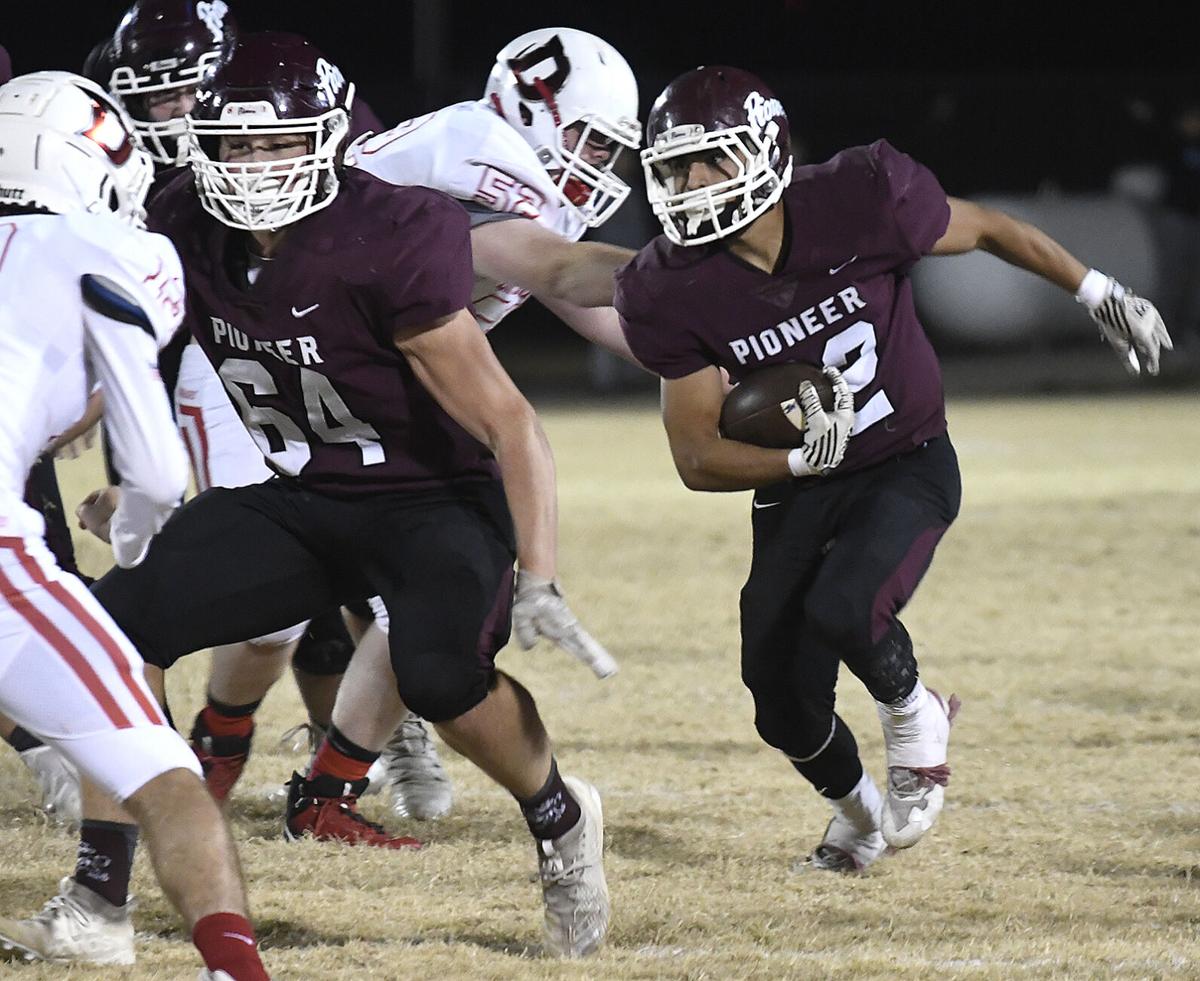 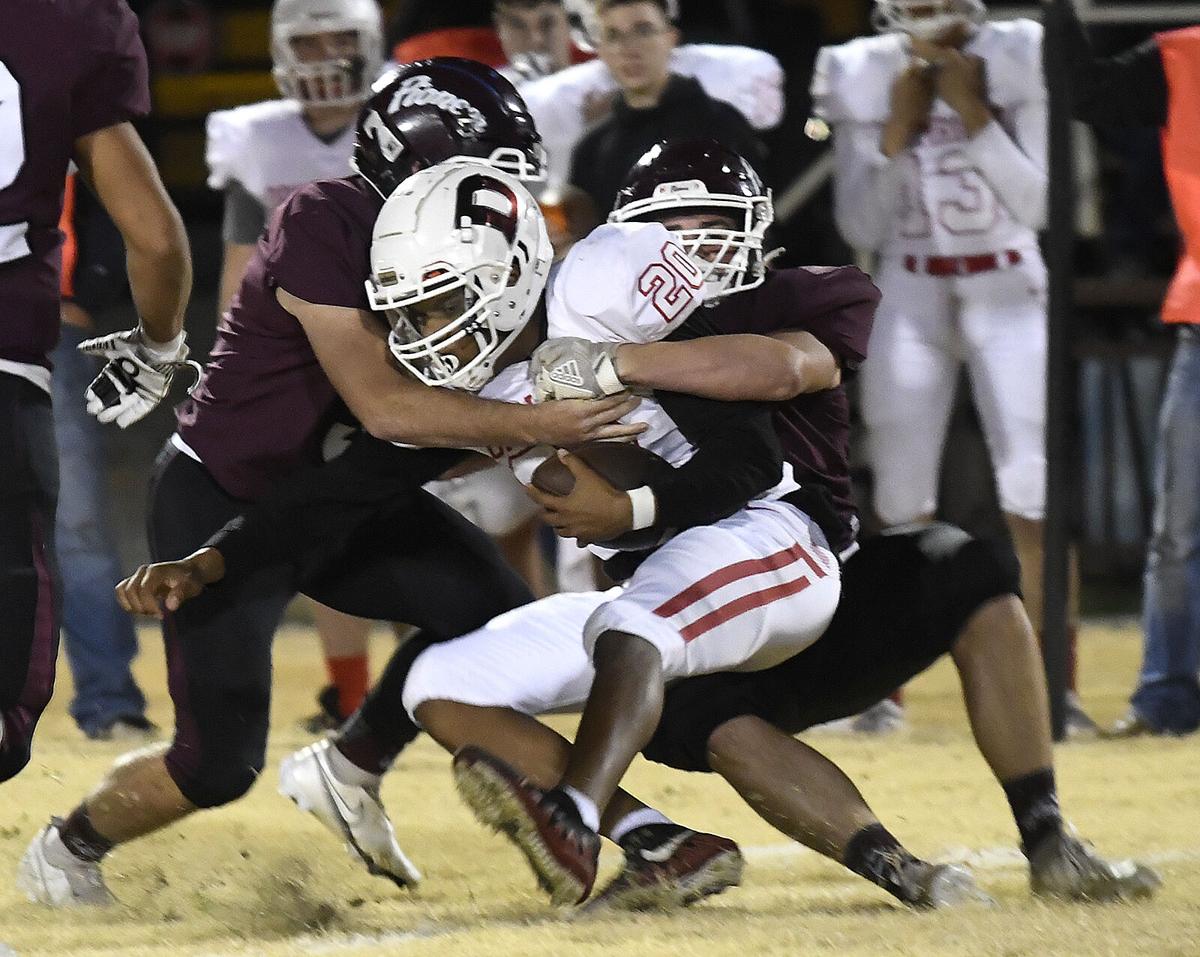 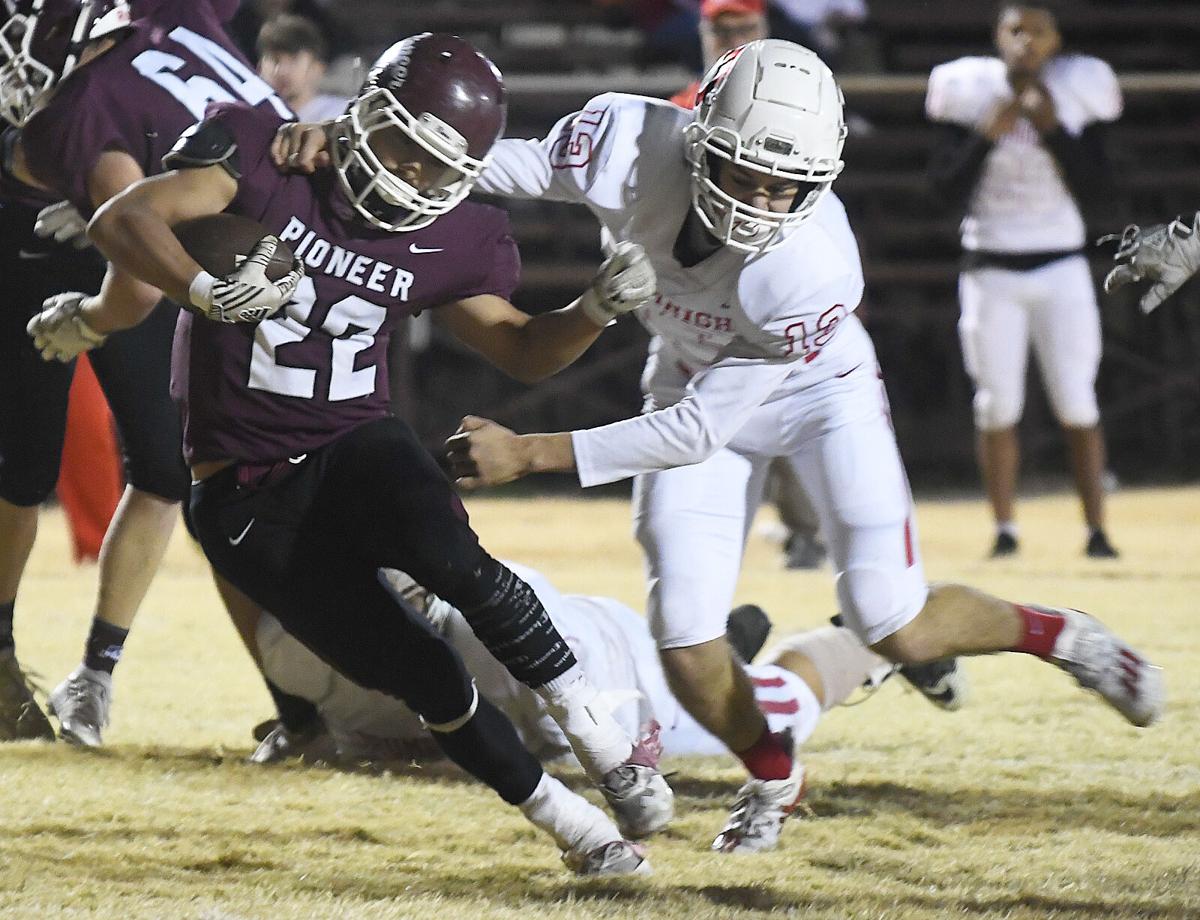 Pioneer’s Rafael Torres gets loose from Drumright’s Estevan Rosas to score a touchdown during the second round of the state playoffs Friday at Pioneer High School. (Billy Hefton / Enid News & Eagle)

Pioneer’s Leyton Parker returns a punt for a touchdown against Drumright during the second round of the state playoffs Nov. 20 at Pioneer High School. (Billy Hefton / Enid News & Eagle)

Pioneer's Caden Humphries keeps his balance to score a touchdown against Drumright during the second round of the state playoffs Friday, November 20, 2020 at Pioneer High School. (Billy Hefton / Enid News & Eagle)

Pioneer’s Rafael Torres gets loose from Drumright’s Estevan Rosas to score a touchdown during the second round of the state playoffs Friday at Pioneer High School. (Billy Hefton / Enid News & Eagle)

Pioneer’s ground game continued to chew up opponents Friday as the Mustangs beat Drumright 52-6 in the Class B playoffs.

The Mustangs dispatched Drumright in one half, rolling up 266 yards — all on the ground — in the game.

Marzell Washington carried the ball just five times and ran for 134 yards and three touchdowns. He opened the scoring with a 34-yard touchdown, added an 80-yard TD run later in the first stanza and scored a 20-yard touchdown run in the second.

Dakota Wingo scored on a 1-yard run, and Leyton Parker ran a punt back 73 yards for a touchdown as Pioneer built up a 30-6 first-quarter lead.

The Mustangs ended the game at the half on the mercy rule, with Rafael Torres scoring on an 18-yard run and Caden Humphries scoring on a 21-yard run.

RINGLING — No. 3 Ringling proved to be too much Friday for Oklahoma Bible Academy as the Trojans fell 33-7 in the second round of the Class A playoffs.

Ringling led only 6-0 at the half, but broke the game open with a 20-point third quarter.

OBA’s touchdown came with just 35 seconds left in the game on an 11-yard run by Jett Cheatham.

Bodie Boydstun threw for 156 yards and ran for 13. Conner Colby led the Trojans in receiving with 69 yards.

COVINGTON — Covington-Douglas scored 28 points in the second quarter to rout Depew 54-20 in the Class B playoffs.

Big plays abounded for the Wildcats, who had three scoring plays of more than 40 yards.

Parker Smith scored three times, on runs of 15 and 3 yards, and a 14-yard pass from Weston Carl. A.J. Kegin scored twice on runs of 46 and 50 yards. Kegin ended up with 139 yard rushing and intercepted two passes on defense.

Christian Tarango also scored twice for the Wildcats, on a 17-yard pass from Carl and a 67-yard run in the fourth quarter. Carl also tossed a 15-yard touchdown pass to Luke Wicker.

James Kroll was active on defense, recording 13 tackles for the Wildcats.

The Wildcats, 9-2, play Dewar next week. The Dragons won 2-0 by forfeit over Weleetka.

CHEROKEE — Balko-Forgan rallied in the fourth quarter to upset Cherokee 24-20 in the Class B playoffs.

The Chiefs, who came into the game ranked No. 3, held a 20-8 lead going into the fourth quarter, but couldn’t hold on.

Balko-Forgan, now 6-5, scored first to lead 8-0, but Cherokee scored the next 20 points. Ruston James scored twice for Cherokee on runs of 9 and 7 yards, while Damien Lobato scored the Chiefs’ other touchdown on a 4-yard run.

The teams were evenly matched statistically, with Cherokee outgaining Balko-Forgan 270-268.

MEDFORD — Drake McMillan scored five touchdowns as Medford rolled to a 52-6 win over Maud in the Class C playoffs.

McMillan ran 17 times for 236 yards and had touchdowns of 22, 48, 16 and 1 yards. He also returned a kickoff 75 yards for a touchdown. McMillan has scored nine touchdowns in two playoff games.

The game ended in the third quarter.

Isaac Koehn scored on a 3-yard run for the Cardinals, and Ellie Gonzales returned a fumble 56 yards for another touchdown.

Medford, 9-2, advanced past the second round of the playoffs for the first time since 2007. The Cardinals will face Mountain View-Gotebo next week. The Tigers beat Sharon-Mutual 56-6.

DAVENPORT — Garber fought back after falling behind by 20 points in the first half to Davenport, but couldn’t get over the hump in losing to the Bulldogs 42-34 in the Class B playoffs.

T.J. Bennett had a hand in all five Garber touchdowns, throwing for three scores and running 1 and 45 yards for the other two.

Bennett’s scoring passes went for 9 yards to Kayleb Darst and 19 and 16 yards to David Nagel.

The Wolverines end their season 7-3.

KINGFISHER — Cade Stephenson scored four touchdowns and Kingfisher held on to beat Lone Grove 51-41 in the Class 3A playoffs.

Stephenson scored on runs of 19, 3 and 52 yards, and returned an interception 36 yards for another touchdown. He also threw a 55-yard touchdown pass to Jarrett Birdwell. Stephenson carried the ball 22 times for 202 yards.

The Yellowjackets led 28-14 after three periods, but the teams combined to score 50 points in the final quarter.

Birdwell caught another long touchdown pass, this one a 67-yarder from Tate Taylor, and Mason Mecklenburg ran in from 1 yard for Kingfisher.

RINGWOOD — Ringwood’s season came to an end with a 32-16 loss to Turpin in the Class B playoffs.

Jaxon Meyer scored on a 1-yard run and threw a touchdown pass to Alex Gonazlez for the Red Devils.

Ringwood closes out the season at 5-6.