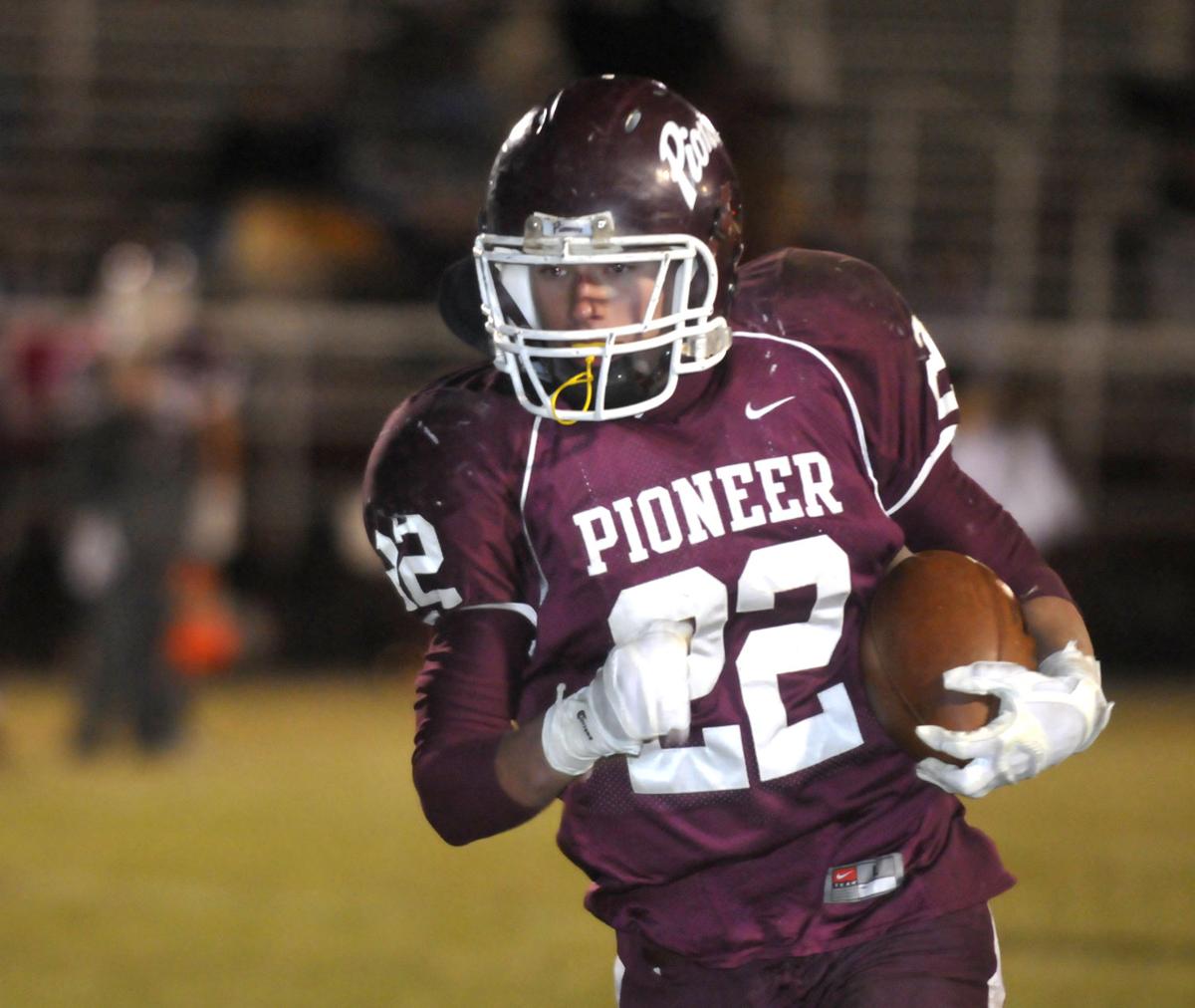 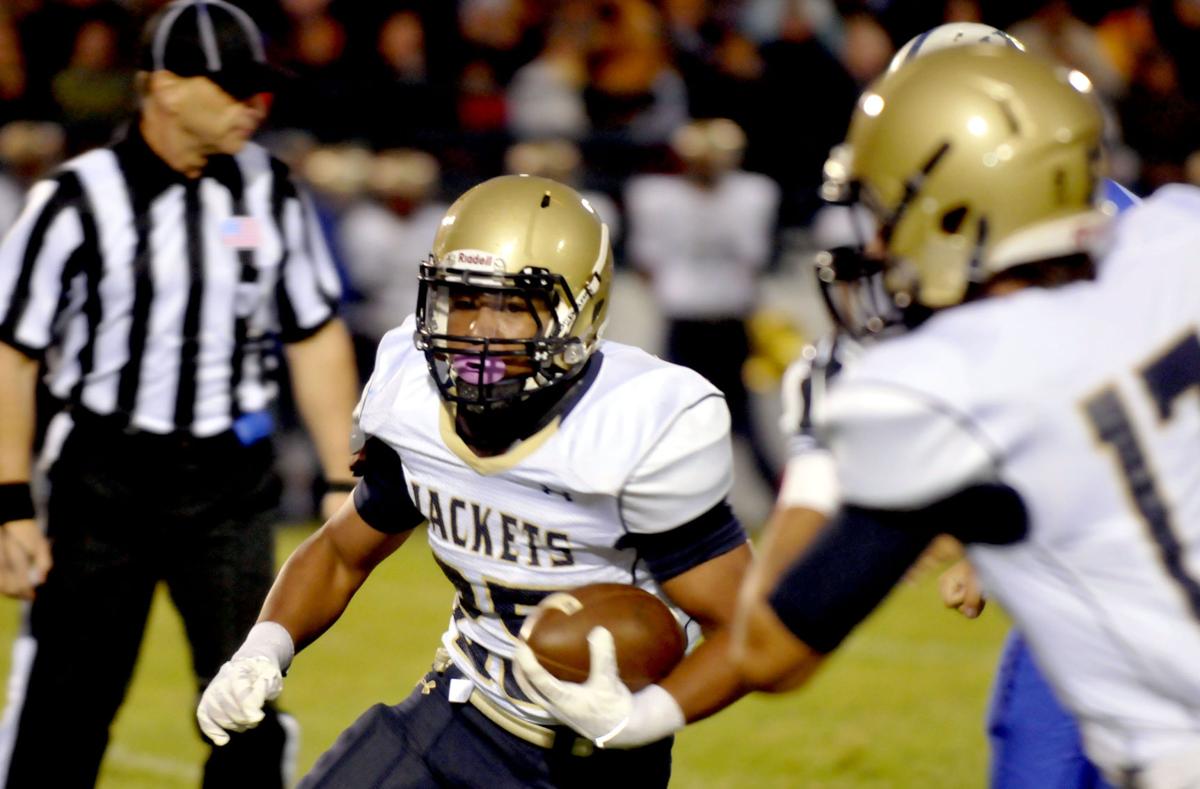 WAUKOMIS, Okla. — Pioneer won’t be in the postseason in its first year back in the ranks of 8-man football, but that doesn’t mean the team can’t have a say in which teams will be.

Merritt shares the same 6-3, 5-3 record with Turpin, and the Cardinals hold the head-to-head advantage with a 55-22 win when the teams played on Oct. 16, but with a Merritt upset against district champion Laverne on Friday, and a Turpin loss, the Cardinals would be out.

“They know they’ve got to take care of business,” said Pioneer head coach Gus Overstreet. “They’re a strong team. We could play spoiler. You never know what’s gonna happen — like I’ve told the boys, in B-1, everything’s 50-50.”

Overstreet is nearing the end of his first season as the Mustangs’ head coach, a return to his high school stomping grounds that started with five straight defeats against a strenuous opening schedule of B-1’s best, but has since netted three wins in four games, including a mild upset in a 46-36 win against crosstown rival Waukomis last week.

The first-year coach said his team is trying not to treat its last game much differently than the first nine, but admitted a strong showing could pay dividends for his second season.

“We knew that we let some games slip through, there were some that we could have won, but we want to have a strong finish that will maybe catapult us into next year,” he said. “We can go out on a good note, and we can play spoiler, but we have to go out and play Pioneer football.”

Kingfisher dropped from No. 2 to No. 5 in the Class 3A rankings after a 27-16 loss to now-No. 2 Heritage Hall last week for the District 3A-1 championship. Kingfisher, though, is headed to the postseason for the 15th straight season. Kingfisher leads the series 4-0, including a 69-18 win last season.

Alva hopes to avoid its first 0-10 season since going winless in 1985. The Goldbugs have given up 425 points this season. Perry is locked-in at third-place in District 2A-1. Alva leads the series 15-9 and has won the last four meetings, including 34-21 last season.

Winner is the District A-1 champion. The loser is assured of finishing second. Thomas, ranked No. 7 in Class A, has outscored opponents 395-91. Fairview is going to the playoffs for the fourth straight year. Thomas leads the series 14-6 and has won the last two meetings, including 30-22 in 2011.

Okeene clinched third in District A-1 by shutting out Oklahoma Bible Academy 7-0 last week. The Whippets’ defense has forced nine turnovers — six interceptions and three fumble recoveries — during a three-game winning streak. They have committed only two turnovers over that time. Okeene is in the playoffs for the 14th straight season. Crescent tries to avoid its first 0-10 season since 1992. Okeene leads the series 14-9 since 1970.

Crossings has clinched second in District A-5. Watonga, with a loss, would record its worst season in more than 40 years. Watonga’s previous worst mark since 1970 was 2-8 in 1973. Watonga is 2-0 against Crossings, including a 56-55 thriller last season.

Laverne, ranked No. 1 in Class B, goes for its 37th straight win over the last three seasons. Merritt needs a win and for either Seiling or Turpin to lose to return to the playoffs. Laverne is the B-1 champion and will be going to the playoffs for the ninth straight season. Laverne is 6-0 against Merritt since 2008.

Seiling tries to bounce back from last week’s 46-34 loss to Kremlin-Hillsdale. The Wildcats still control their destiny. They will be third with a win and could finish no lower than fourth if Merritt loses to Laverne. The Red Devils have lost six straight games after opening the season 3-0. The 8-man series is tied 2-2, but Ringwood won the last two meetings, 46-21 in 2012 and 41-6 last season.

Shattuck could tie for first in C-1 with a win over Balko and a Boise City win over Cherokee. Shattuck would be second if the Indians and Cherokee both win. Balko is in the playoffs, but could finish third in C-1 by beating Shattuck and Boise City upsetting Cherokee. Shattuck leads the 8-man series 12-4, including a 34-28 squeaker last season. There would be a three-way tie for second between Shattuck, Boise City and Balko if Cherokee and Balko win.

Cherokee puts its 20-game winning streak and No. 1 ranking on line. The Chiefs had an open date last week. Cherokee is the C-1 champion with a win. The Chiefs are in the playoffs for the third straight season.

Coyle is ranked No. 3 in Class C. Bluejacket is tied for No. 6. Bluejacket, to win the district outright, needs to beat Coyle and DCLA to beat Copan. Three-way tie could favor Coyle since it has 90 points in the tiebreaker system compared to 60 for Bluejacket and 52 for DCLA. Coyle could lose by 14 points and still be the district champ in that scenario.

DCLA can finish second in District C-3 with a win over Copan and a Coyle win over Bluejacket.The Eagles have had at least 142 yards rushing and passing the last three games. Harrison Muegge has scored 15 touchdowns and thrown for 17 more, including 12 to Britton Stacy.

DOVER - Memorial service for Larry Matthews, 65, will be at 1 p.m. Friday, Feb. 21, 2020, at Dover Christian Church. Viewing will be Tuesday and Wednesday from 9 a.m.-8 p.m. at Cordry-Gritz Funeral Home, Hennessey.