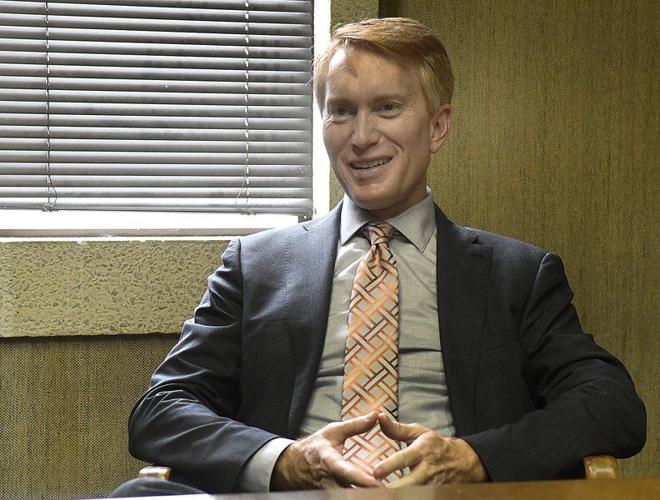 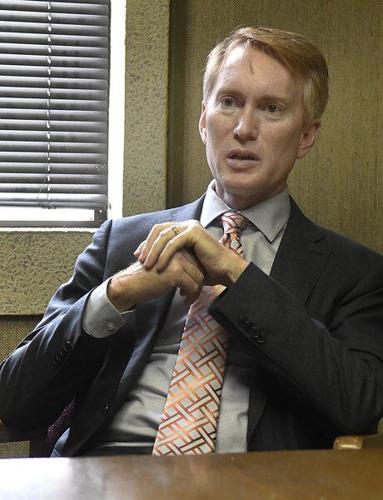 ENID, Okla. — U.S. Sen. James Lankford, R-Okla., called for an end to tax credits for the wind industry, discussed state-federal-tribal relations and expressed high confidence in the nation's election security, during a visit to the Enid News & Eagle Tuesday afternoon.

Lankford expressed support for wind energy, but said the time has come to remove production tax credits for the industry.

"I don't have a problem with wind energy," Lankford said. "It's one of many good sources of energy we have."

But, he added, "wind is profitable on its own."

Lankford said the industry's success is it's own argument for ending tax credits.

"It's very clear they don't need a federal tax benefit to make that work," Lankford said.

Lankford visited at length on issues surrounding the fallout of the July U.S. Supreme Court decision in McGirt v. Oklahoma — a landmark decision that found roughly the eastern third of the state remains tribal land, assigned as reservations to the Five Civilized Tribes.

"We just had 1.6 million people wake up the day after that decision, and find out they live on a reservation," Lankford said, which has caused considerable confusion about criminal and civil boundaries, and how the local, state, federal and tribal governments will interact in the affected areas.

Lankford said stakeholders at all levels still are sorting out the impact of the ruling.

To deconflict issues like zoning, taxation, adoptions and business interests, Lankford said all seven members of Oklahoma's congressional delegation are "highly engaged" in sitting down with state leaders and representatives of all five tribes, to avoid conflicting interests and to ensure stability.

He said the price of failure in that process would be considerable.

"My push is, we have got to sit down and actually negotiate, because people will not move into the state with new companies if they don't know the rules," Lankford said. "Capital is a coward. Capital will not go where there isn't stability, and right now there isn't stability in eastern Oklahoma."

It's impossible to know if Oklahoma lost out on bringing a Tesla production plant to Tulsa because of that lack of stability, Lankford said, but added Tesla announced it was moving its plant to Texas a week after the McGirt decision was handed down.

Lankford said he is confident the state, federal government and tribes will find a mutually beneficial way forward.

"We're all neighbors," he said, "and we can figure this out."

"Very high," Lankford responded, when asked his confidence level on the security and integrity of this November's general election.

Lankford sounded alarm bells last year about election security, and worked across the aisle on the bipartisan Voting System Cybersecurity Act of 2019.

That bill did not make it through Congress, but Lankford said the bill still served an important end — he said the five key points of the bill have since been implemented by the Department of Homeland Security, without the need for a new law.

"There are a lot of things that didn't happen in 2016 happening all the time now," Lankford said.

States have been able to implement a second layer of cybersecurity and regular data backup, Lankford said, which, taken together, greatly reduce cybersecurity risk in the election. Just as important, Lankford said relationships have been strengthened between the federal and state governments to allow DHS to assist states, without relying on mandates.

The biggest threat remaining from 2016 is much more low-tech, Lankford said.

"Our biggest threat is still going to be misinformation," he said.

Unverified, false memes and social media posts from foreign actors continue to be dumped into American social media, and Lankford said people supporting both presidential candidates are prone to believe what their friends post online.

"People want to trust the people they know," Lankford said, "and if they go online and a friend posted something, they want to believe it's true.

"It's an incredible thing how many people believe everything they see on social media," Lankford said, "and it's killing us."