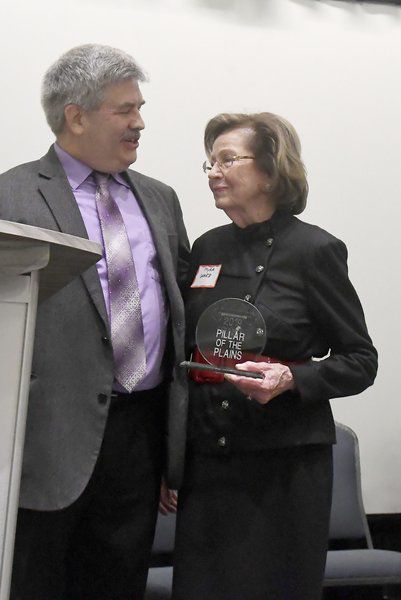 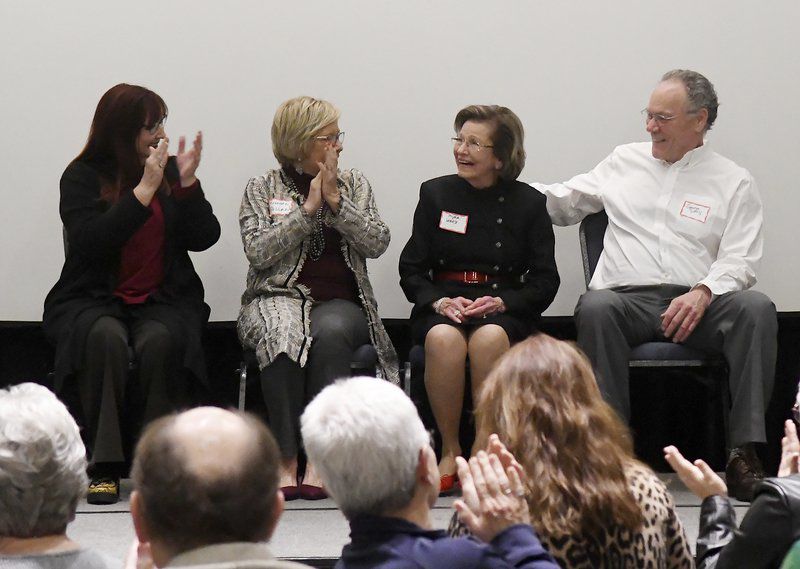 ENID, Okla. — Myra Ward was named 2019 Pillar of the Plains Thursday evening at a reception held in the second-floor ballroom of Stride Bank Center.

"Thank you," Ward said. "It's an honor and I really appreciate it. Thank you."

The Enid News & Eagle, along with community partners, created Pillar of the Plains in 2003. The ceremony honors local people who have been active in the community, improved the quality of life and made the Enid area a better place.

Ward was selected from among 2019 honorees Carmen Ball, George Davis and Roxanne Pollard. Funk introduced the four honorees to a standing-room-only crowd.

"Myra Ward turned a successful life in and around the oil business into an opportunity — an opportunity to give back to the causes that improve the life of Oklahomans," Funk said. "Myra's roots in our state go back to when her grandfather came to Waukomis shortly after the Cherokee Strip Land Run. They lived our region's history."

He said Myra and Lew saw an opportunity to inspire young people through the history of Enid and the Cherokee Strip, knowing the great sacrifices people made to make Enid a better place.

"They wanted Enid to prosper in the future," Funk said. "And inspiring people through the study of history was a way to do that."

"Beginning in 2006, they launched a campaign to finance such a project, and ended up raising more than $10 million," Funk said. "The Wards' personal contributions of time and money were the motivator for many other people, including, in 2016, a $1 million matching grant to build an endowment for operations."

Funk spoke of Ward's interest in the oil and gas industry. Her father, Carl, was a successful oilman. She earned a degree in geology from the University of Oklahoma in 1953. As a woman in geology, she was a trailblazer at the time.

It was at OU where she met Lew. They were married for 61 years.

"Friends and associates said the Wards always were a team, in their community service as well as business, although much of their generosity was never publicized," Funk said.

Retired banker Bert Mackie said of the Wards, "There weren't very many areas Lew and Myra haven't touched. They worked hand in hand as a team for the good of mankind."

The Wards also gave $1 million to Oklahoma Medical Research Foundation in 2006 to create an endowed chair in biomedical research.