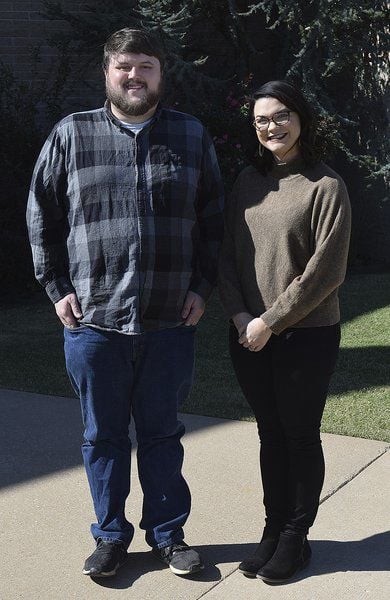 The Rev. Jeff Hinton,of Okeene United Methodist Church, (left) and the Rev. Emily Robnett, of New Hope United Methodist Church, are teaming up their congregations in an effort to purchase and forgive $4.5 million in medical debt in Northwest Oklahoma, and they're seeking the help of other congregations to make it happen. (James Neal / Enid News & Eagle) 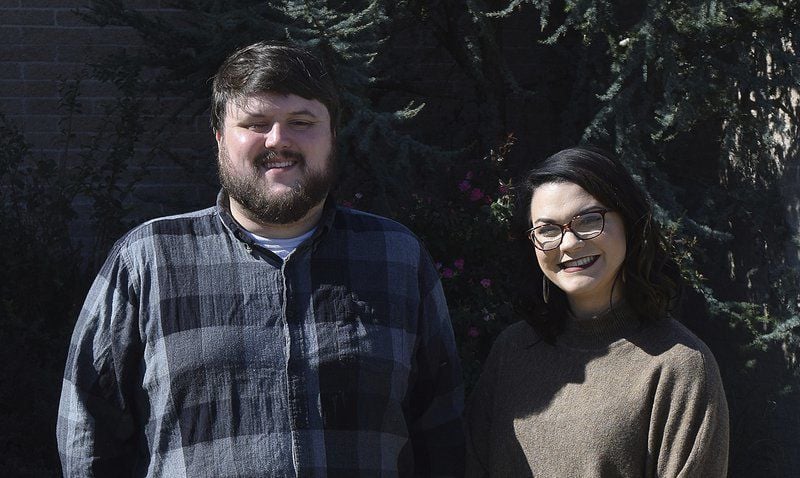 The Rev. Jeff Hinton, of Okeene United Methodist Church, (left) and the Rev. Emily Robnett, of New Hope United Methodist Church, are teaming up their congregations in an effort to purchase and forgive $4.5 million in medical debt in Northwest Oklahoma, and they're seeking the help of other congregations to make it happen. (James Neal / Enid News & Eagle)

The Rev. Jeff Hinton,of Okeene United Methodist Church, (left) and the Rev. Emily Robnett, of New Hope United Methodist Church, are teaming up their congregations in an effort to purchase and forgive $4.5 million in medical debt in Northwest Oklahoma, and they're seeking the help of other congregations to make it happen. (James Neal / Enid News & Eagle)

The Rev. Jeff Hinton, of Okeene United Methodist Church, (left) and the Rev. Emily Robnett, of New Hope United Methodist Church, are teaming up their congregations in an effort to purchase and forgive $4.5 million in medical debt in Northwest Oklahoma, and they're seeking the help of other congregations to make it happen. (James Neal / Enid News & Eagle)

Okeene United Methodist Church purchased and forgave the $1 million in medical debt this week through RIP Medical Debt, a Rye, N.Y.-based nonprofit that uses donations to purchase bundles of medical debt from debt collection agencies for pennies — sometimes less than a penny — on the dollar, and then forgives the debt.

The Okeene congregation will team up with New Hope United Methodist Church of Enid on Oct. 26, 2019, in a bingo night fundraiser, part of an ongoing effort to forgive a total of $4.5 million in medical debt for families in need in 17 Northwest Oklahoma counties.

The Rev. Jeff Hinton, pastor at Okeene United Methodist, said the effects of medical debt touch all communities in Northwest Oklahoma, and all congregations and denominations.

"Medical debt is something where you don't have many options," Hinton said. "When you show up to the doctor and they recommend you have something done, you either do it or you remain sick, or get worse. And, people are waiting to see health care until it's either do this or die, and then you don't have any options."

The Rev. Emily Robnett, pastor at New Hope United Methodist, said she wanted to participate in the medical debt forgiveness effort because she's seeing its effects in the local community.

"What we have is people who are afraid to go see the doctor," Robnett said, "because they are afraid it will cost them more than they can afford, which is often the case."

Overcoming medical debt may seem insurmountable, Hinton said. But, because RIP Medical Debt buys the bundles of debt for about a penny on the dollar, each donation goes a long way.

"Every dollar given in our campaign can pay off about $100 of medical debt," Hinton said.

People can't apply to have their medical debt forgiven. RIP Medical Debt screens rolls of medical debt for people who fit specific criteria: they must earn no more than twice the poverty level, or have more than 5% of their income in medical debt, or have medical debt that has been deemed insolvent. When eligible candidates are identified, their debt is made available for local donors to purchase, so that it can be forgiven.

"Instead of doing what normally happens, which is to harass them night and day, they do what they feel is necessary to address the crisis in medical debt, which is to forgive it," Hinton said. "And, it truly is a crisis."

In a 2016 poll, The New York Times and the Kaiser Family Foundation found about 20% of people under age 65 with health insurance reported having problems paying medical bills. For those without insurance, that number jumped to 53% who had trouble making medical debt payments.

For those who had insurance, but still had problems keeping up with payments, 63% said they used up all or most of their savings; 42% took on an extra job or worked more hours; 14% moved or took in roommates; and 11% turned to charity, according to The Times.

And, in Oklahoma, the uninsured rate is higher than the national average.

In 2017, Kaiser Family Foundation found Oklahoma had an uninsured rate of 14% of the total population, compared to 9% of the United States, making Oklahoma tied with Alaska for the second-highest rate of uninsured residents, behind only Texas, at 17% of the population.

With such a high rate of uninsured people, Hinton said it's imperative churches step in to help those in need recover from unpaid medical debt.

"This is something where we can really make a difference in people's lives," he said.

"I think we are living in a time when we really need a lot more good to happen," Robnett said. "Our goal is to send a letter to each of these families before Christmas, telling them their medical debt is paid off."

Robnett said she's seen the impact of insurmountable medical debt in her own family.

"I used to watch my grandmother have to choose between paying her bills or buying her medication," Robnett said, "and I just imagine what it would have been like for her to receive a letter saying 'Your medical debt has been forgiven.'"

Robnett said it's not just a nice thing to do to help people cover medical debt — it's a Christian mandate.

"The United Methodist Church believes health care is a human right, and all people should have health care," Robnett said. "That is scriptural — that we should care for all people. It's about living out our calling as Christians to care for all of God's children, and what better way to do that than by paying medical debt for people who are in need."

"We have an opportunity to give people their lives back," Hinton added, "and in the church, we're in the business of new starts.

"It's just bonkers this even has to exist," Hinton said, "but as long as it does, we need to be a part of it."

The bingo night fundraiser will be 6-9 p.m. Oct. 26 in the sanctuary at New Hope United Methodist Church, 614 N. Garland. Cost is $5 per bingo card, and concessions will be for sale.

Hinton said other churches in Enid and other Northwest Oklahoma communities are being sought to help raise the estimated $33,000 needed to meet the goal. He said it's an ecumenical effort, open to all.

"The problem is bigger than any one church," Hinton said, "and the solution should be too."

Anyone unable to attend the fundraiser can donate online at https://secure.qgiv.com/event/okeene, or checks can be made payable to Okeene United Methodist Church, with RIP Medical Debt in the memo line, and sent to Okeene UMC, PO Box 424, Okeene, OK 73763.

Donation of a grand prize item for the bingo night also is being sought. For more information, contact New Hope UMC at (580) 237-2551.

RIP Medical Debt was awarded a gold medal for transparency this year by Guidestar, a nonprofit that tracks and rates the effectiveness of U.S. nonprofits.