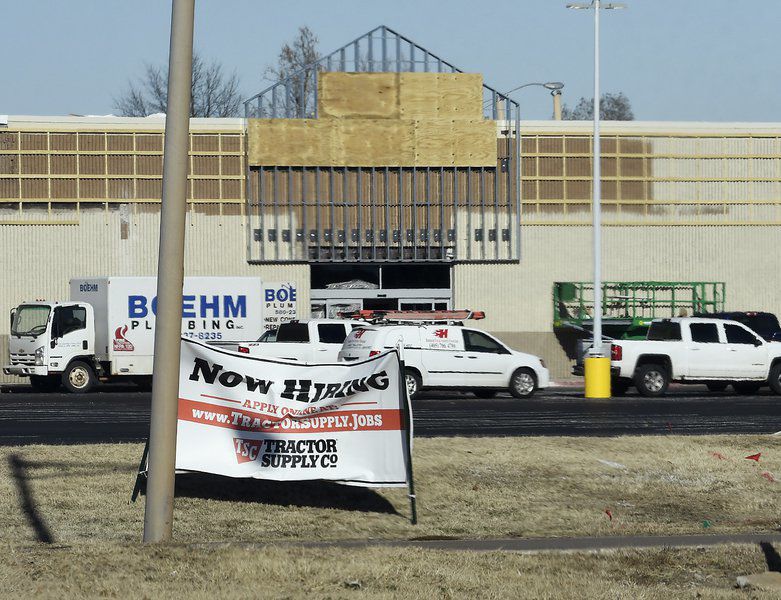 A sign advertising jobs with Tractor Supply Co. stands near the old Kmart store on West Garriott, which is being renovated for Tractor Supply and Harbor Freight. 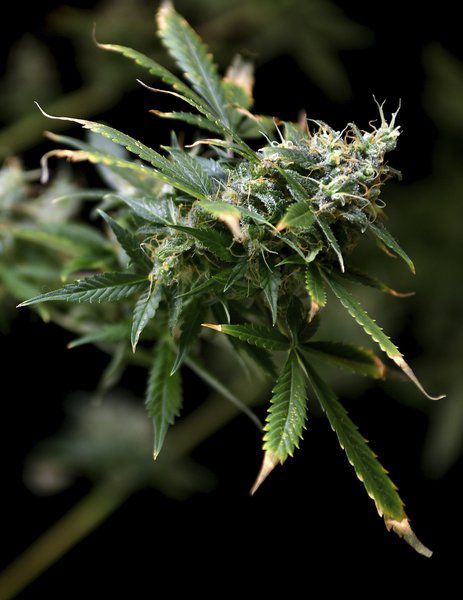 Medical marijuana became big business in Enid and across Oklahoma in 2019. 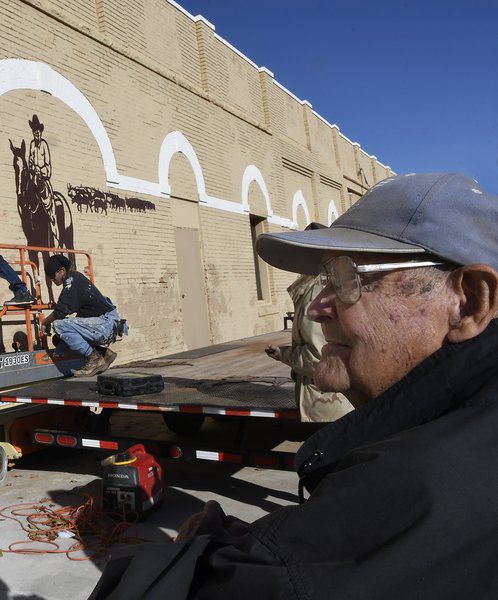 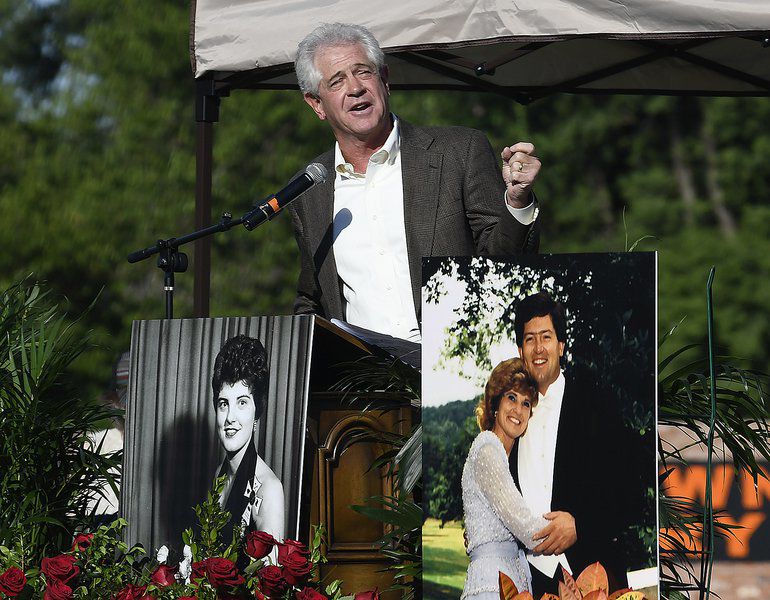 Mark Allen speaks during a public memorial service for his mother, Joan Allen, on June 17, 2019, at David Allen Memorial Ballpark.

A sign advertising jobs with Tractor Supply Co. stands near the old Kmart store on West Garriott, which is being renovated for Tractor Supply and Harbor Freight.

Medical marijuana became big business in Enid and across Oklahoma in 2019.

Mark Allen speaks during a public memorial service for his mother, Joan Allen, on June 17, 2019, at David Allen Memorial Ballpark.

It was full of good news and bad news, triumph and tragedy. Enid News & Eagle staff members voted on the top 10 stories of the year. Here are stories 1 to 5 ...

ENID, Okla. — The year 2019 was an eventful one for Enid and Northwest Oklahoma.

It was full of good news and bad news, triumph and tragedy. Enid News & Eagle staff members voted on the top 10 stories of the year, and we will see the results beginning today with stories 10-6.

The top five will be published in the Wednesday News & Eagle.

Two Catholic priests with ties to Enid and Northwest Oklahoma are among 11 priests found to have substantiated allegations of sexual abuse of minors.

David Imming and James Mickus were two of the 11 priests identified in a report by the law firm of McAfee & Taft. The firm released a report of its independent investigation into how the Catholic Archdiocese of Oklahoma City handled and responded to allegations of sexual abuse of minors by priests dating back to the 1960s.

Archbishop Paul Coakley commissioned the report last August, after a Pennsylvania grand jury report detailed clergy abuse of more than 1,000 victims by more than 300 priests there, dating back to 1947.

McAfee & Taft's completed 77-page report identified 11 priests who faced substantiated allegations of sexual abuse of minors between 1960 and 2018. Those 11 were identified from examination of records of 545 priests who served in the archdiocese during that period.

Imming and Mickus have ties to the Catholic community in Enid. No charges have been filed against either.

Garriott died April 15 at age 88 at his home in Huntsville, Alabama.

He went into space twice. Garriott's initial space flight on Skylab 3 was from July 28 to Sept. 25, 1973, according to OHS. On this mission, he and his two crewmates conducted major experiments in science and medicine for a total of 1,427 hours in space. Garriott spent 13 hours and 43 minutes on three separate space walks outside Skylab.

His last mission to space began Nov. 28, 1983, aboard the Space Shuttle STS-9, which included the first flight of the Spacelab 1 international science station. That mission carried the first international shuttle crew and payload specialists. On this flight, he also conducted the first manned amateur radio operations in space. In 1986, Garriott resigned from NASA to go into private business, according to the OHS.

Garriott was born Nov. 22, 1930, in Enid and graduated from Enid High School in 1948 He earned a bachelor of science degree in electrical engineering from the University of Oklahoma in 1953.

He and his former wife, the late Helen Walker Garriott, were co-founders of Leonardo's Children's Museum.

Allen was known for her support of Enid Symphony Orchestra, David Allen Memorial Ballpark, United Way of Enid & Northwest Oklahoma and a host of other charitable endeavors.

Allen came to Enid in 1973 with her husband Paul and made a home in the community with their sons, Mark, David and Greg. She went on to become an accomplished pilot, flying the corporate plane for Advance Meat Co. and later Advance Food Co. giving presentations across the country to support the company founded by Paul and partner David McLaughlin.

Allen was instrumental in building David Allen Memorial Ballpark, widely regarded as one of the nation's premier amateur ballparks, in honor of her late son, David, who died in October 1995. She served as chair of the ballpark construction committee and went on to be president of David Allen Memorial Ballpark, Inc. In 1997, Allen was a nominee for the Pillar of the Plains award, based largely on her efforts to build the downtown ballpark.

In 2018, Allen was honored with the Dick Lambertz Memorial Award, presented each year to a volunteer who has demonstrated significant long-term support of United Way, community leadership and personality traits that characterized Dick Lambertz.

Allen also was a passionate supporter of education and was instrumental in establishing the Allen Family Opportunity Scholarship, which provides a $10,000 annual scholarship for up to four years for Enid area students headed to a two- or four-year college.

One of Allen's closest associations and most passionate philanthropic efforts was with Enid Symphony Orchestra. She served as co-chair of the $3.2 million fundraising campaign to transform Enid's second Masonic Temple into Enid Symphony Center, served two terms as Enid Symphony Association president and in 2016 became president-emeritus of the ESA. In 2017, the symphony association named the main hall the Joan Allen Symphony Hall in her honor.

Klemme, an Enid native and historian, died June 26 at the age of 93.

Klemme was best known for marking Oklahoma’s portion of the Chisholm Trail with hundreds of signposts, an endeavor that took seven years to complete and required sifting through government records more than a century old.

Starting in 1990, Klemme erected 400 200-pound markers to illustrate where a trail crossed a section line, finally finishing the project in 1997. Klemme also aided the city of Enid Public Works Department and Visit Enid in painting hoof prints along the portion of the trail that aligned with Enid’s streets for its 150th anniversary in 2017.

He also worked for nearly 20 years to get the Chisholm and Great Western trails designated as National Historic Trails, and this year National Park Service finally determined they met that criteria. Now that the trails have been designated by NPS, Congress can enact legislation to officially designate the trails while ensuring the protection of private property rights, according to a press release.

For this work on the trail and his advocacy in attempting to get Chisholm named a National Historic Trail, in 2011 Klemme was named Cultural Traveler Trailblazer of the Year by U.S. Cultural & Heritage Tourism Marketing Council.

Oklahoma’s medical marijuana program was approved by voters in 2018, with the state operating under emergency rules until permanent guidelines went into effect in August 2019.

The industry has seen explosive growth this year. For the first three months of the 2020 fiscal year (July through September), medical marijuana generated more than $34.5 million in tax revenue. In Garfield County, tax revenue topped $644,000 in those three months, from 16 dispensaries, according to Oklahoma Medical Marijuana Authority.

Enid city commissioners took a big step in mid-December when they voted to use eminent domain to clear a path for the Kaw Lake water pipeline project through several properties along the planned route.

The 70-mile pipeline will cut across 230 parcels from Kaw Lake to a future water treatment plant in Enid, and while many effected landowners have reached agreements with the city and taken financial compensation from it, six parcels are refusing to make way.

Two groups account for the six, one an individual landowner with a single parcel in Osage County, and a second group of several owners of the remaining five parcels. These properties sit in three counties, Garfield, Noble and Osage.

City Manager Jerald Gilbert said many efforts have been made in hopes of a more amicable solution, but they've failed.

Some owners have demands the city can't or won't meet, Gilbert said. The single-parcel owner has become unresponsive and hasn't been heard from since summer, said Tulsa-based attorney Danny Williams.

Williams has 27 years of legal experience, much of it dealing with condemnations and property disputes, which is why the city has hired him.

The city of Enid has spent roughly $2.4 million securing easements so far, and as of October, deals had been reached on 99 parcels.

On the down side, Enid lost of longtime businesses, with Dillard's, United and Sears Hometown announcing closures.

Dillard's corporate headquarters confirmed in June it was closing its Enid location at Oakwood Mall.

"We will operate the store as a clearance location until its closure around the end of the year," said Julie Johnson Guymon, a spokesperson for Dillard's, said at the time. "We strategically close locations from time to time, and such is the case with our Enid store."

United Supermarket, 4110 W. Garriott, was closed in December, and Sears Hometown shut down in the summer.

On the positive side, Harbor Freight Tools and Tractor Supply will move into the old Kmart Building, at the corner of Oakwood and Garriott.

Renovations to the 350,000-square-foot building are ongoing.

Harbor Freight officially has said it is moving into the building, but while Tractor Supply has not made such an announcement, construction permits submitted with the city for renovations to be made to the Kmart building name Tractor Supply.

Work also is ongoing for The District, a 20-acre development at the corner of Cleveland and Garriott. Hideaway Pizza, Colton's Steakhouse and the Jiffy Trip convenience store chain all have signed on to the development.

There also is a 7.1 acre lot set aside for a future movie theater, and a 13,000-square-foot shopping center will be constructed as well. Two national companies are interested in the shopping center and are looking at lease rates.

In a December meeting, Enid city commissioners discussed ongoing talks with Apex Cinemas, as well as possible incentives the city might offer to a prospective theater chain interested in the Enid market.

Felix Waller, owner of Apex Cinemas, was supposed to join commissioners to detail his plans for a new theater in Enid, but wasn't able to make it.

According to City Manager Jerald Gilbert, Waller called on Monday to tell him he was canceling his planned visit.

"He wanted to take some time to fine tune. He knows in the city there's a lot of talk about entertainment options, so he's looking to see what he can incorporate," Gilbert said.

Gilbert said he expects Waller will sit down with commissioners in the near future.