An architect's rendering depicts an addition to the east end of the existing Northwest Oklahoma Blood Institute Enid Donor Center, at 301 E. Cherokee. A $1.4 million capital campaign has been launched to bring the project to fruition. 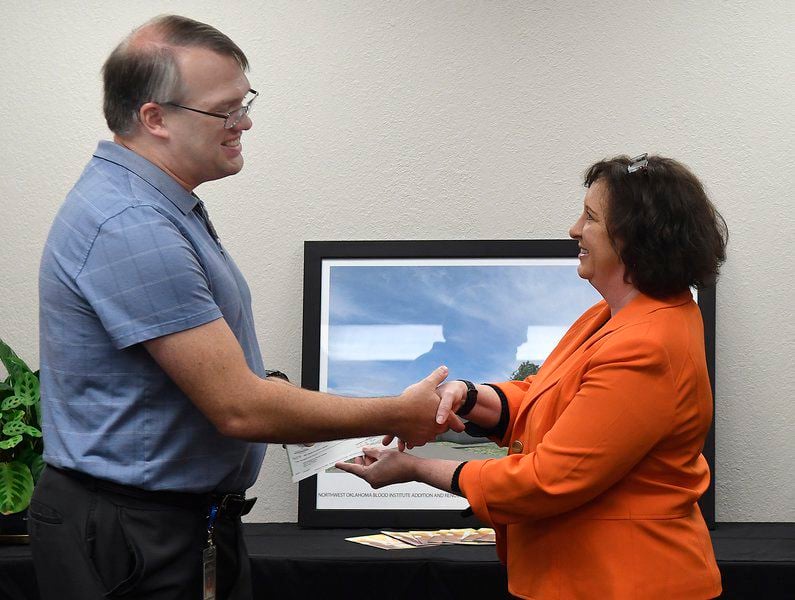 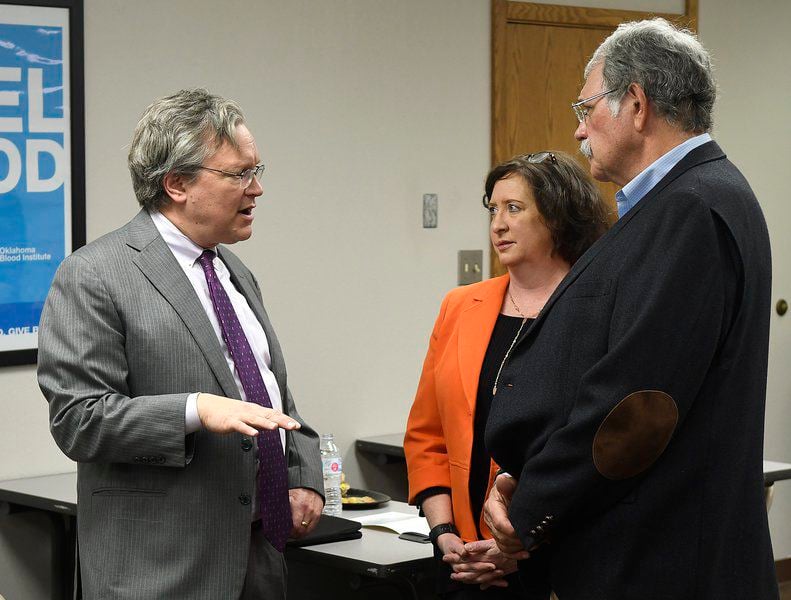 An architect's rendering depicts an addition to the east end of the existing Northwest Oklahoma Blood Institute Enid Donor Center, at 301 E. Cherokee. A $1.4 million capital campaign has been launched to bring the project to fruition.

The capital campaign aims to build an addition onto the east end of the donor center at 301 E. Cherokee and to upgrade and renovate the current portion of the center.

"We are very pleased to have the $50,000 donation from the Northwest Oklahoma Osteopathic Foundation to kick-start our campaign," said Jessy Dershem, executive director of Northwest Oklahoma Blood Institute (NWOBI) Enid Donor Center.

Dershem said NWOBI already is working with Corbin & Merz Architects of Enid to design the project, which is slated to occur in two phases.

The first phase, tentatively set to break ground in early 2020, will be the addition onto the east end of the existing building, including three additional offices, a storage room and staging area for donor center staff, and a covered loading and unloading area.

Dershem said the covered loading and unloading area is essential for the staff to prepare Blood Mobiles, vans and trailers for the more than 900 mobile blood drives the Enid Donor Center supports per year.

"It will greatly improve our efficiency, help us grow, and improve quality of life for our front-line staff," Dershem said.

Remodeling the interior of the donor center will be the second phase, improving the working environment for staff and the atmosphere for donors, Dershem said.

The donor center is set to collect more than 26,000 units of blood this fiscal year, impacting about 78,000 patients in need of blood products, according to NWOBI figures.

"We believe in the mission of the Northwest Oklahoma Blood Institute, and we know how important a successful blood bank is to the community and the hospitals," Luetkemeyer said. "We thought this gift would be a good opportunity to jump in, to kick it off, and to challenge other businesses to do the same.

Dr. Gary Patzkowsky, D.O., a member of Northwest Oklahoma Blood Institute board of directors, said the osteopathic foundation's donation enabled the NWOBI board to open to the public a capital campaign that has been more than two years in the planning phase.

"This is a good time to get started, and bring the campaign to fruition," Patzkowsky said.

He said it's past time to provide upgrades in a building built in 1975, and updated only once, in the early 1990s.

"It's time to modernize the facility, and create more space for the staff and donors," Patzkowsky said. "It's our purpose to support the blood institute, and obtain the blood and blood products that people need. Our goals is to make sure blood is available for the people of Northwest Oklahoma."

"It's been more than three decades since we've had any kind of crowd-sourcing of funds to update the facilities, so you know when we come asking, it's time," Baylor said. "It's great to see Northwest Oklahoma Osteopathic Foundation step up to give and kick things off."

While there's a long way to go to raise the full $1.4 million for the capital campaign, Baylor said Tuesday's $50,000 donation gives the campaign the inertia it needs to keep going.

"Sometimes getting that first step is the hardest," Baylor said. "This donation will enable us to hit the 'go button,' and it will give us the inertia we need to carry us forward in the fundraising effort."

OBI president and CEO Dr. John Armitage, M.D., said the upgrades at the Enid Donor Center will not only support current demand, but also position the center to test and process blood products for developing research and technology in regenerative medicine and cell therapy.

"We want to make sure this community is well up on the list of places that get the benefit of those cures and therapies when they become available — earlier, rather than later," Armitage said. "We want to bring that kind of clinical therapy to our communities as early as possible."

Armitage said having a donor center in a city the size of Enid, and expanding that facility, is possible only because of the generosity of the community. Enid has one of only nine donor centers in the state, with four of the nine being in the Oklahoma City metro.

"That is a testament to the generosity and the civic support of the Enid community," Armitage said. "Neighbors help neighbors here ... and that needs to be honored. Folks in this community should take pride in that."

For more information on the capital campaign, and how to support it, contact Jessy Dershem at the Northwest Oklahoma Blood Institute Enid Donor Center, at (580) 233-9323 or email jessy.dershem@obi.org.

HUNTER - A private immediate family service for Stephen Earl Buss, age 56 of Hunter will be Tuesday at Memorial Park Cemetery with Rev. Don Johnson officiating. Arrangements are under the direction of Ladusau-Evans Funeral Home.