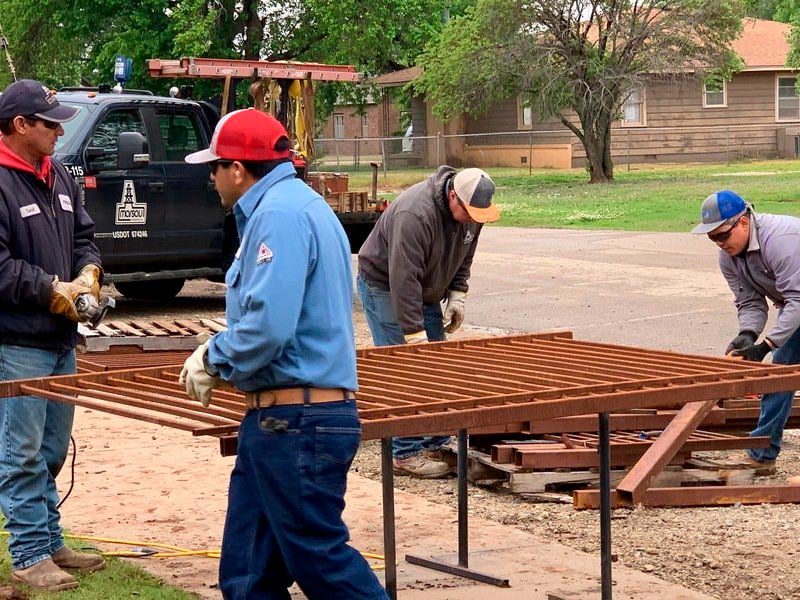 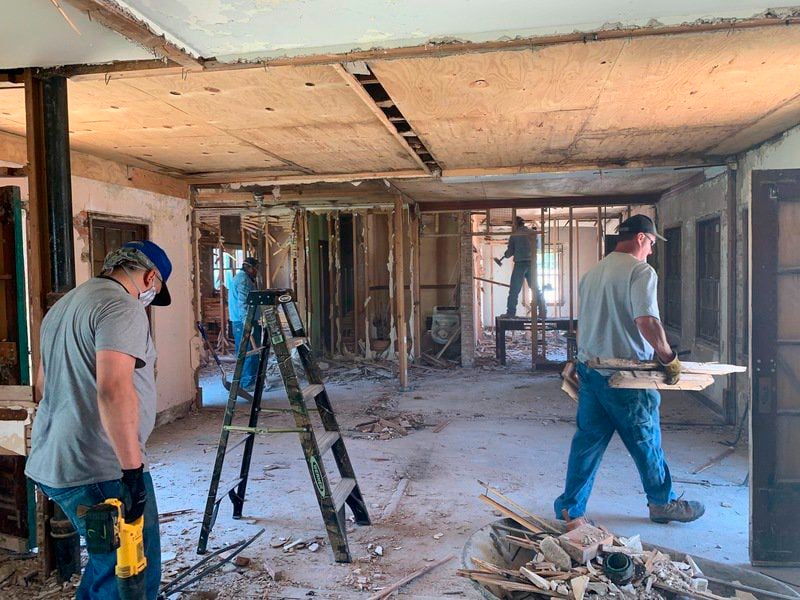 Marsau Enterprises employees do demolition work in a building destined to be a field house adjacent to the football field and basketball gym at Pond Creek-Hunter High School.

Marsau Enterprises employees do demolition work in a building destined to be a field house adjacent to the football field and basketball gym at Pond Creek-Hunter High School.

ENID, Okla. — While the combination of the coronavirus pandemic and slowdown in the oil and gas industry has many oilfield workers sidelined, employees at Marsau Enterprises have been busy in recent weeks completing projects for local schools and nonprofits.

One of the projects Marsau employees have undertaken is renovation work of an old building on Pond Creek-Hunter High School property that eventually will be a new field house.

Pond Creek-Hunter High School Principal Kelly Childress said Marsau workers have been doing demolition work in the building, which has only been used for storage since the 1940s.

The building, located between the high school's basketball gym and football field, will allow both basketball and football players a place to prepare for games closer to the field and court.

"It just enhances the facilities," Childress said. "We've built a brand new field, and this building will enhance the program."

Childress said school employees have been working on the building as they had time, but when Marsau offered a crew of workers, it opened up new possibilities.

"When we were contacted by them asking if we had any work they could volunteer for, it just gave us an opportunity to expedite the process," Childress said. "I felt like it was a very generous offer and they're still there working."

Childress said Marsau had been sending five to seven workers a day, for almost a month, to do demolition work and install fencing.

"You put five to seven more able bodies on a job, and it certainly expedites the work and relieves the stretched and stressed staff within the school," Childress said. "It's pretty noble of them in these times to offer that and keep their employees employed and working."

Mae Jacobi, office manager at Marsau Enterprises, said the company accepted the Paycheck Protection Program (PPP) forgivable loan from the federal government to help keep employees on the payroll for at least eight weeks during the pandemic, and the slowdown in oilfield activity.

"Marsau's owner, Marlin Esau, wanted to do everything he could do to help the families of the 227 people we had employed, even if it was only for the eight-week period the funding was for," Jacobi said.

Jacobi said the volunteer work is a way to continue the company's community involvement, and to honor and provide for its employees — at least for as long as possible.

"We have a longstanding commitment to this community, we have always bought local whenever possible, given to the school fundraisers, hosted and donated to charitable events," Jacobi said. "We have employed a large number of people in this community and we understand the impact on Oklahoma unemployment the virus has caused, and the crash in oil prices make it that much worse in our area.

"Taking the loan allowed us to give our people eight weeks to figure out what they can do next, prepare for the possibility of the work no longer being there for them to maintain their employment," Jacobi said. "But for these eight weeks, we could help ensure they could pay their bills, feed their families and continue health care coverage for themselves and their families. We have people that work at Marsau that have been here 35-plus years, and this is a sad turn of events all the way around."

The volunteer work also allowed Marsau to put the PPP funds to work in the community, Jacobi said.

"Mr. Esau is not going to allow anyone to sit at home and do nothing," Jacobi said. "He started this company in 1982 and not a day has passed that he has sat at home. He just does not operate that way, and he expects the same of his people."

In addition to the Pond Creek-Hunter work, Marsau crews have moved bleachers at Hillsdale Christian School, helped with an expansion project at Pleasant Vale Elementary School, helped with projects at Forgotten Ministries, and helped put down new artificial turf at Anew Church.

Jacobi said the Marsau Enterprises yard in Lindsay has been keeping busy with similar projects.

Through it all, Jacobi said Marsau workers "have respected and adhered to all recommendations and guidelines to keep our people safe as well as making sure those we were helping in the community."

While Marsau, like so many other companies, works to keep its employees on the payroll, Jacobi said the emphasis should be on the commitment of the workers.

"We have employees that work from sunup to sundown to provide for their families. The oil field is not for the faint-hearted, and it is back-breaking work," Jacobi said. "It is an honor to work with these men."