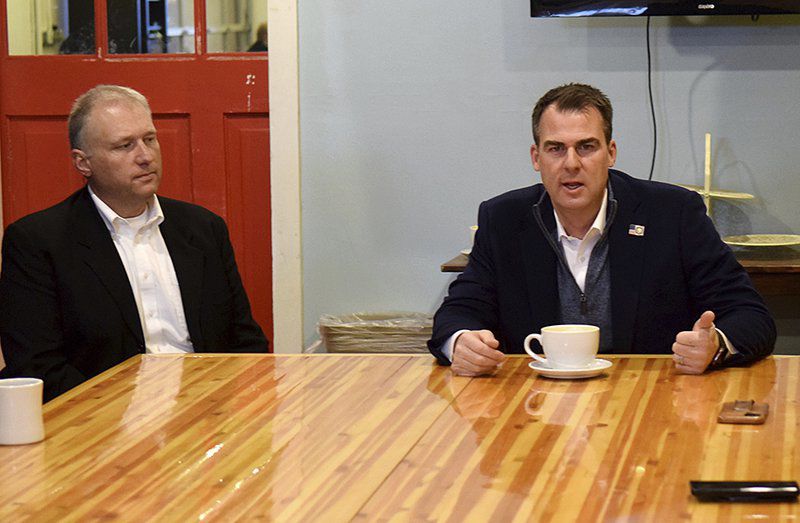 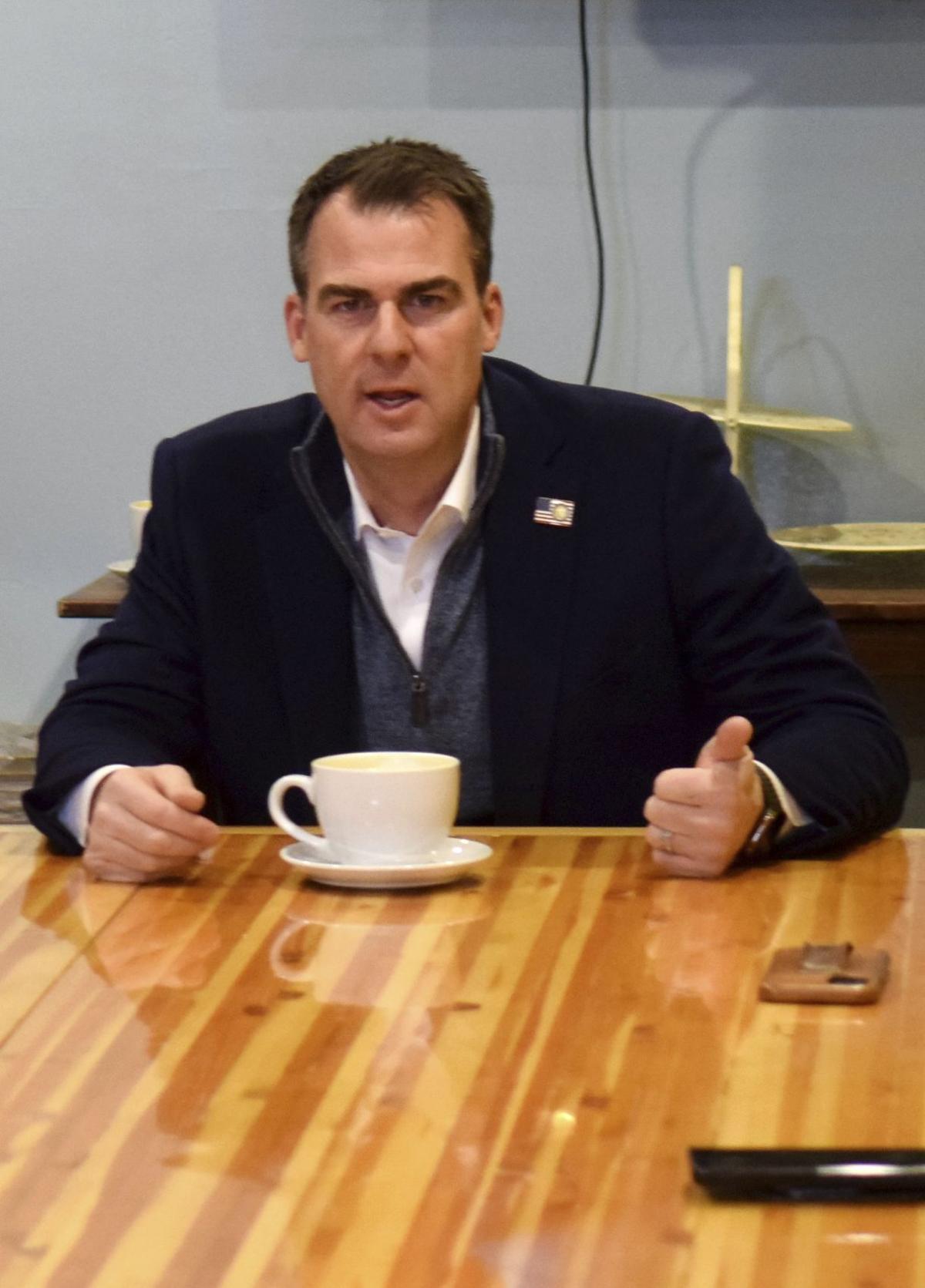 Stitt met in a room at Five80 Coffeehouse with about a dozen local officials to briefly review and answer questions on his alternative to State Question 802. The group did not include any representatives from local health care providers, with the exception of state Rep. Chad Caldwell, R-Enid, who is executive director of Hospice Circle of Love.

Stitt announced SoonerCare 2.0 during a visit to Washington on Jan. 30 — about three months after SQ 802 gained the signatures needed to place it on a state ballot. SoonerCare 2.0 would accept Medicaid block grant funds from the federal government, but would be completed through the legislative process, rather than constitutional amendment.

According to a Jan. 30 release from Stitt's office, SoonerCare 2.0 would not require any new taxes to pay for the state's $150 million share of about $1 billion that would go into the Medicaid expansion.

The state's portion of the expansion would be funded by "leveraging future funds" in the Tobacco Settlement Endowment Trust, from anticipated cost savings due to Medicaid offsets in Department of Corrections and Department of Mental Health and Substance Abuse, and — the largest source — an increase in the Supplemental Hospital Offset Payment Program (SHOPP) fee, according to the governor's press release.

SHOPP fees are provider fees paid to the state by Medicaid service hospitals, with some exemptions. Currently, the SHOPP fees in Oklahoma are set at 2.5% of net patient revenues. The governor's plan would increase that to 4%, which Stitt pointed out would remain below the national standard, and current rate in neighboring Kansas, of 6%.

Stitt said his purpose in visiting Enid Friday was to explain the plan firsthand to local leaders, in hopes they would "help carry the water for me" to get the plan passed.

"A real challenge for me is just explaining the plan and making sure Oklahomans understand what's happening," Stitt said.

He said Medicaid expansion by constitutional amendment, through SQ 802, would offer "no flexibility for the long-term," but he's advancing SoonerCare 2.0 because "Oklahoma and Oklahomans want more money, and more federal dollars, going into our health care." Stitt pointed to Oklahoma's uninsured rate as cause for that concern.

A report released last September by the U.S. Census Bureau shows about 548,000 Oklahomans still lacked health insurance in 2018 — an increase of 3,000 since 2017, and the second-highest rate in the nation, behind only Texas.

Stitt said SoonerCare 2.0 would cover an additional 180,000 Oklahomans, the "exact same 180,000 as if 802 passes," though he said he would like to see work or school requirements for those who would be covered under the expansion in SoonerCare 2.0.

"They have to be bettering themselves," Stitt said.

The governor said he'd also like to see provisions to ensure Medicaid recipients who are working don't "fall off a cliff" of losing benefits before they earn enough to cover private insurance.

"I don't want a cliff where they lose benefits if they're working or trying to better themselves," Stitt said.

'They didn't consult me when they wrote 802'

Some have raised concerns over SoonerCare 2.0's proposed hike in SHOPP fees.

In a Feb. 10 article, Oklahoma Council of Public Affairs pointed out some critics see a potential for Oklahomans’ private insurance rates to increase, and the increased SHOPP fees could further endanger already cash-strapped rural hospitals.

Stitt addressed those concerns Friday by saying savings from implementation of the federal block grant program could help offset extra SHOPP fee costs for rural hospitals. But, he went on to characterize concerns that the higher SHOPP fees could endanger rural hospitals as "disingenuous," since Kansas currently has a 6% SHOPP fee — 2% higher than his proposed fee.

"Look at Kansas," Stitt said. "They have hospitals there."

As for management of SoonerCare 2.0, Stitt said it remains undecided if the plan would be administered by Oklahoma Health Care Authority (OHCA), or if it would be managed by a third-party private manager. Currently, OHCA has an administrative fee of 4.35%, whereas third-party managers can charge up to 15% in administrative fees in Oklahoma.

In response to a question from the News & Eagle about concerns over a perceived lack of input from health care providers and hospital administrators in the drafting of SoonerCare 2.0, Stitt said "they didn't consult me when they wrote 802," referring to the state question.

Stitt said further SQ 802 was written by hospitals "and their lobbies."

None of the local hospitals were represented at the meeting to address that claim.

Finny Mathew, president of Integris Bass Baptist Health Center, said he was made aware of the meeting Friday morning, and was able to visit briefly with the governor at Bass.

Krista Roberts, CEO of St. Mary's Regional Medical Center, said she found out about the meeting from a local resident, and didn't know about it until it was too late to attend.

A statement from Great Salt Plains Health Center, a federally qualified health center, with locations in Enid, Cherokee, Medford and Canton, indicated CEO Tim Starkey, who also is on the state's health advisory board, was not notified of the governor's meeting to discuss SoonerCare 2.0 on Friday.

The News & Eagle was notified of the 9:15 a.m. meeting by the governor's office at approximately 8:40 a.m. Friday.

When reached by the News & Eagle, Jeff Hickman, former Republican speaker of the state House and Great Salt Plains Health Center chief communications officer, said he wasn't aware in advance of the governor's Enid meeting, nor did he have any involvement in drafting SQ 802.

"I know as much about the writing of 802 as I do about this meeting today," Hickman said Friday.

Hickman said GSP Health looks forward to learning more details of how SoonerCare 2.0 would be implemented.

It remains unclear how much health care providers will be able to weigh in on SoonerCare 2.0 as it enters legislative consideration. Speaking to implementation of Medicaid expansion, Stitt expressed doubt that hospitals would apply the extra funding to expand coverage.

"If we go with exactly how the hospitals tell us to do it, you put a billion dollars into their system, and they can bill it to the people who are already there," Stitt said.

If it's passed, Stitt said SoonerCare 2.0 could be implemented by July. In a Feb. 6 article, Stitt's budget secretary, Mike Mazzei, told the Journal Record implementation of the plan isn't in the fiscal year 2021 budget, which begins in July, and it would take at least two years to implement SoonerCare 2.0.

"Implementation not only doesn't occur in the upcoming fiscal year, but I think the soonest we could start SoonerCare 2.0 would be in the fall or winter of 2022," the Journal Record reported Mazzei saying.

Stitt said Friday it remains undecided when SQ 802 will be on a state ballot.