ENID, Okla. — Ward 3 Enid City Commissioner Ben Ezzell filed Monday in district court an objection to the petition calling for his recall, which commissioners, including Ezzell, will consider setting a date for Tuesday.

For the Nov. 3 date, Garfield County Election Board must receive a mandatory 75-day filing notice of the recall election by Wednesday.

Candidates may file to replace Ezzell from Aug. 24-26 for a November race. With the race functioning as a regular election, if another candidate receives the highest number of votes, that person would represent Ward 3 until Ezzell’s term expires in May.

A February recall election would coincide with the regular election for successor to Ezzell, who terms out in May after two four-year terms.

Should someone else be elected for a full term in February, whoever wins the recall election — Ezzell or a challenger — would hold the seat until the commissioner-elect is sworn into office in May, City Attorney Carol Lahman said.

Lahman said Ezzell need not abstain from the vote, but if he does, it would count as a “nay” vote. Ezzell said he would not be abstaining Tuesday. 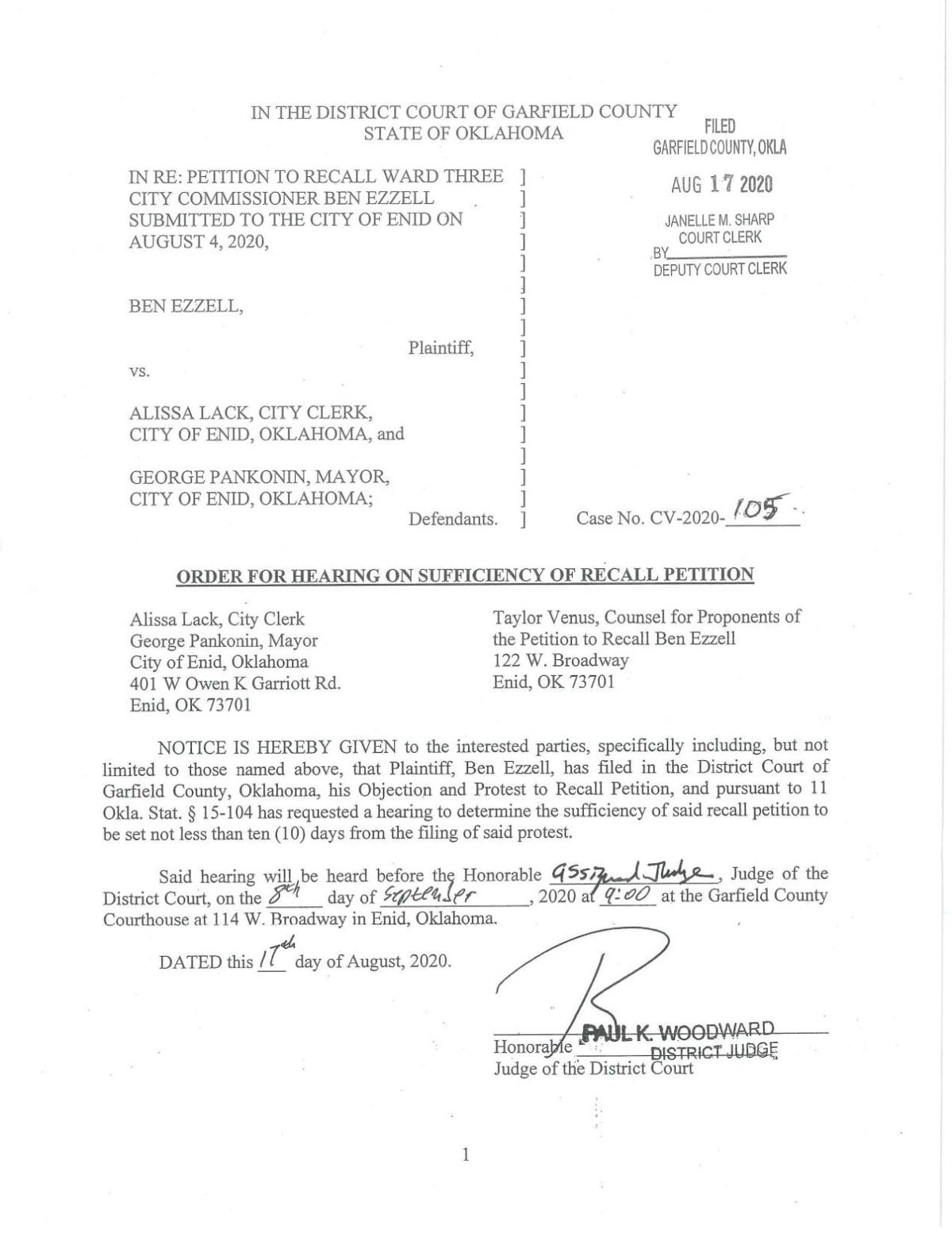 Ezzell has a hearing for 9 a.m. Sept. 8 at Garfield County Court House to protest the city clerk’s verification of the petition, which City Clerk Alissa Lack certified Aug. 7 as meeting the minimum requirements to hold an election.

According to Ezzell’s filing, he as the plaintiff calls for the petition to be deemed insufficient for the following reasons: the petition pamphlets failed to include obligatory language provided for in state statute; the circulators failed to check photo identification cards when collecting signatures, making their written affirmations ineffective; the affirmations fail to address charter requirements for truthfulness of underlying statements; and the seven stated reasons to recall Ezzell are “each either legally meaningless, specifically allowed under charter and/or ordinance, objectively and obviously false, or otherwise fail to describe any grounds or charges for recall.”

The petition calls for Ezzell’s recall for reasons including, among others: “Conduct unbecoming of an elected official”; “dividing our community by threatening use of force and advocating fines against law abiding, healthy citizens”; and “disrespecting our police department and failing to heed the advice of our police chief.”

Taylor Venus is listed in the filing as counsel for the proponents of the petition.

The group Enid Freedom Fighters submitted the petition Aug. 4 to the city clerk after spending the weekend prior collecting signatures throughout the ward. According to Lack’s notice of sufficiency, nine circulators affirmed either they knew the electors personally; they went to the electors’ homes and checked the online election site; or the elector said they were a Ward 3 registered voter.

A supplemental affirmation provided Aug. 5 by circulator Penny Sweet identified which of 110 electors were known to the circulator personally and which were signed in the elector’s home.

Lack verified 87 of its 204 signatures were sufficient, though 135 were Ward 3 voters. The minimum requirement to hold a recall in Ward 3 is 69 signatures, or 30% of total votes for the ward’s last election in 2013.

Lack disqualified 69 signatures for not being those of eligible Ward 3 voters — the most being 48 of the 94 signees the petition circulators both didn’t know and didn’t contact in the home, Lahman said.

Friday is the deadline to file a protest or objection to the petition.