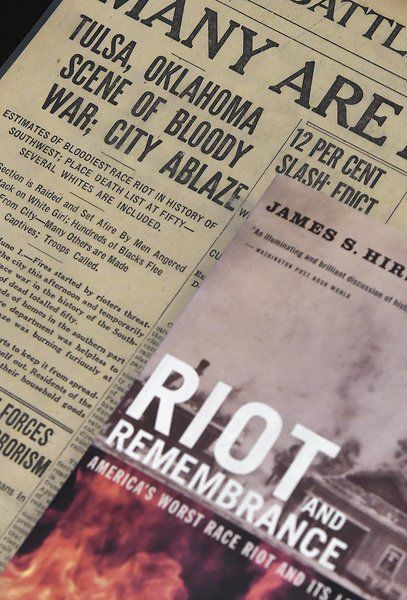 A newspaper and book on the Tulsa Race Massacre are on display during a Black History Month exhibit sponsored by the Enid Dr. Martin Luther King Jr. Holiday Commission at Stride Bank Center. 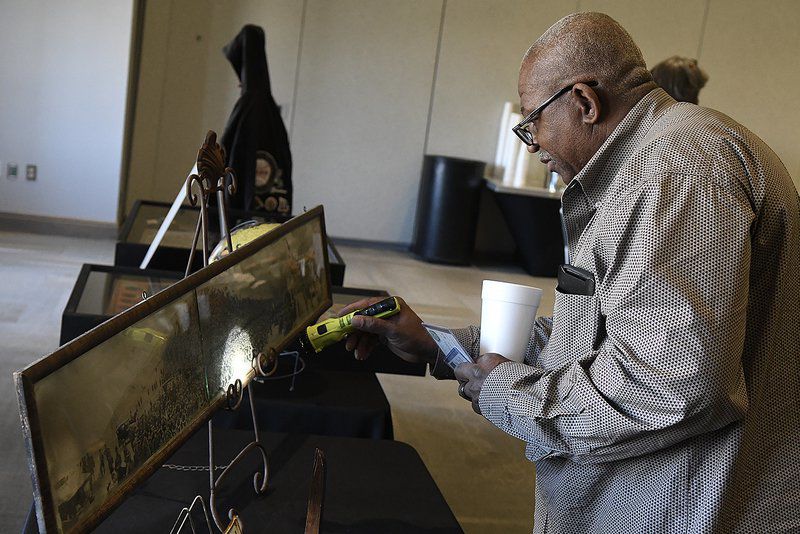 A newspaper and book on the Tulsa Race Massacre are on display during a Black History Month exhibit sponsored by the Enid Dr. Martin Luther King Jr. Holiday Commission at Stride Bank Center.

The exhibit, "Enharmonic Keys to History," was curated from the collection of local artist Deoral Carr Jr., who has been collecting artifacts related to black history since 1995.

After displaying portions of his collection at the annual Martin Luther King Jr. Day Celebration and in the Leona Mitchell Southern Heights Heritage Center and Museum, Carr said he was asked by the commission to present a display from his collection for Black History Month.

Visitors toured the cases of artifacts and visited personally with Carr, then took time to visit during the come-and-go event, 1-7 p.m. Monday in the Nick Benson Ballroom at Stride Bank Center.

Carr's exhibit, which he characterized as "black Americana," was an eclectic mix of historic artifacts, print media, advertising and photographs, that both celebrated the accomplishments of black Americans and highlighted the endemic racism of American history, and America present.

Original newspaper articles about the Tulsa Race Massacre, and other such incidents around the country, postcards and marketing pieces featuring pejorative caricatures of black children, and images and artifacts from segregation could be found alongside photos from the Tuskegee Airmen, a 1919 commemorative piece on the Emancipation Declaration and mementos of historic figures like Booker T. Washington, Bessie Coleman and Madam C. J. Walker, one of the first women — black or white — to become a self-made millionaire in America.

Some of the pieces were seldom-seen oddities that highlight racial divides, such as Dutch dolls in blackface, color prints from early editions of "Uncle Tom's Cabin," and a version of the board game Monopoly, called "Blacks and Whites," put out by Psychology Today in 1970 to educate whites about the challenges black people face in everyday aspects of American life. One of the cards Carr selected to display the contemporary relevance of the game reads "Former Grand Dragon of the Ku Klux Klan elected president. Go back four spaces."

Carr said the collection came together as a result of "what I've learned, what I've discovered and what I've knocked the dirt off of," with the purpose of sharing aspects of black history that might be overlooked or forgotten by younger generations.

"What I see myself doing is revisiting the past," Carr said. "The bottom line is a lot of the things that happened in our past, black people today aren't even aware those things were going on."

Jeri Neal said she was interested in the exhibit because it contained a lot of information she never learned in school. She worried too many young students today, both black and white, are not being taught black history.

Sitting next to her, Teresa Tucker said kids don't realize "how far we've come, or that we seem to be going in a circle now."

Tucker said she was drawn to the exhibit because her great-grandmother escaped from the Tulsa Race Massacre in 1921. She wants others to remember that history, and the lives of those who perished.

Carr said education and remembering is the point of the exhibit.

LaFaye Austin, vice chair of the Dr. Martin Luther King Jr. Holiday Commission, said the display portrays important aspects of history that all Americans, of all races, need to see.

"These things need to be exposed to more people — white, black or whatever — so they can understand why racism is so offensive to us," Austin said. "We want people to understand why it hurts."

Austin said it's a popular response to say 'This is all in the past — let's just move on,' but true healing cannot happen until all people truly embrace and understand both sides of the white-black divide in American history.

"It's not possible to heal by ignoring this," Austin said. "You need to know about it, and why we feel the way we do about these things. Knowledge is power, and people need to know this — especially the younger generations."

ENID - The funeral services celebrating and honoring the life of Avis Hughes, of Enid, are pending under the direction of Brown-Cummings Funeral Home. Condolences may be made online at www.Brown-Cummings.com.

ENID - The funeral service celebrating and honoring the life of Anna Huff, of Enid, is pending under the direction of Brown-Cummings Funeral Home. Condolences to the family may be made online at www.Brown-Cummings.com.