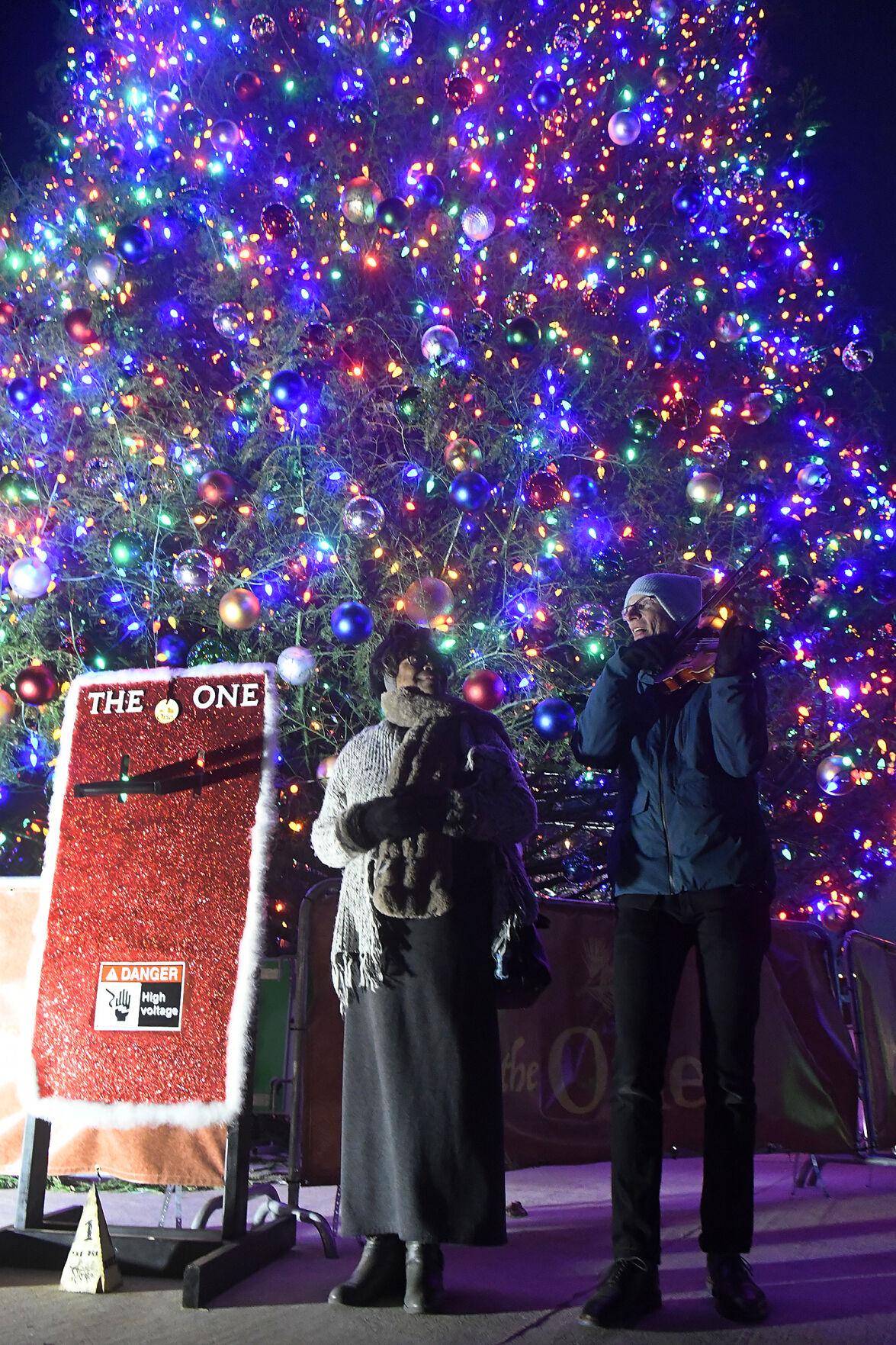 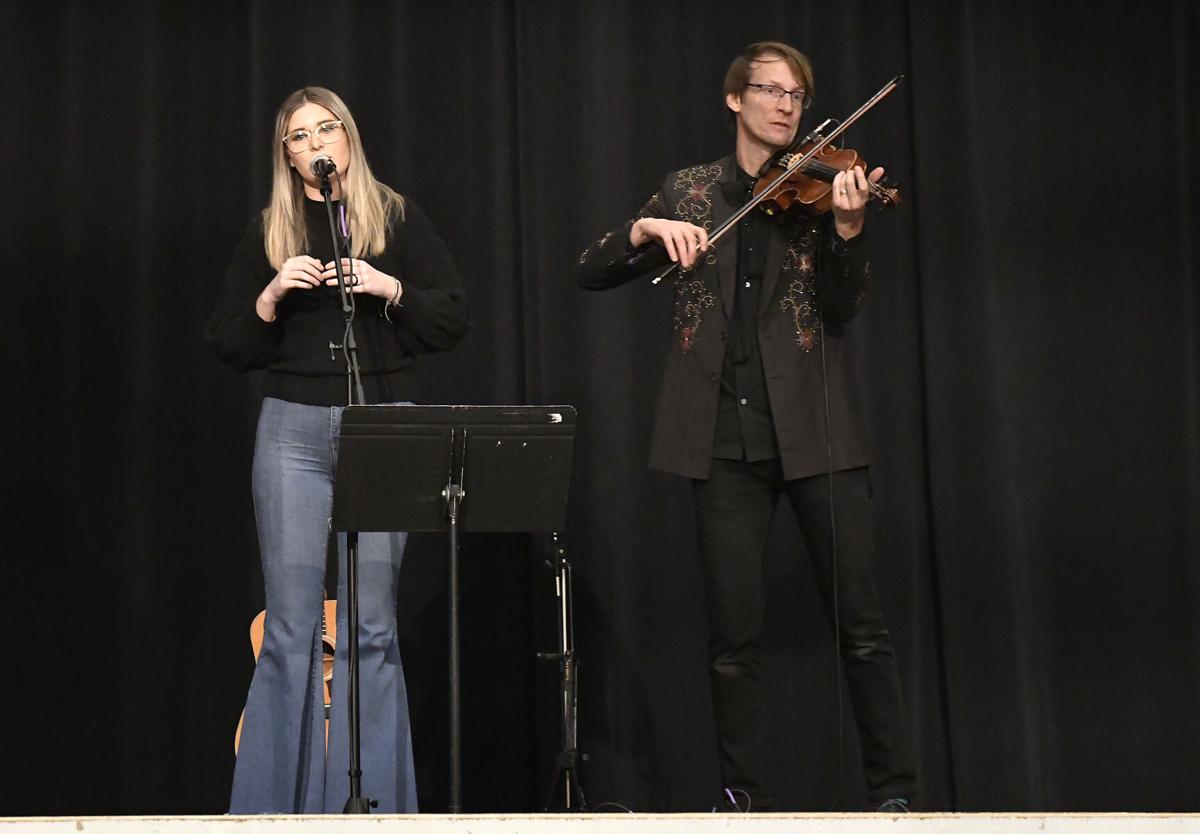 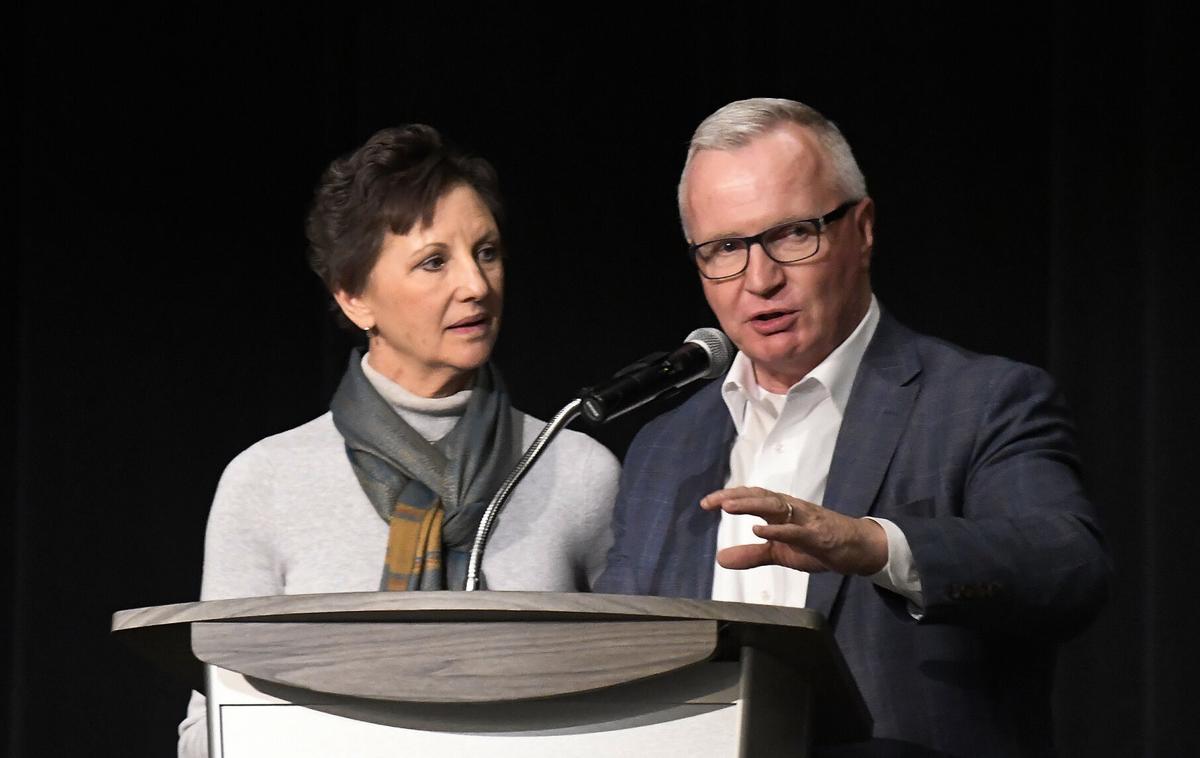 Carol and Kyle Williams speak during the de-lighting ceremony for The One Christ Tree on Thursday, Jan. 6, 2022. (Billy Hefton / Enid News & Eagle)

ENID, Okla. — The night grew silent and dark as The Christ Tree powered down for the season.

The 42-day holiday event series The One ended Thursday, as a crowd celebrated inside the Stride Bank Center Grand Ballroom, then outside at the tree site.

Attendees sang the last two verses of “Silent Night” before lighting marshal Lyntel Murphy hit the off switch on the The Christ Tree and all of its perimeter trees.

The One closing ceremony began and ended with entertainment from musical artists Kyle Dillingham and Haley Gray.

Nicole Winfield, project manager for The One, began by thanking the community of Enid for the support shown since the project was unveiled.

“It was an absolute joy to read the posts of support, see all the photos across social media and see everyone out there taking in the beautiful Christmas campus that was created,” Winfield said. “To see such joy that The One Christ Tree, the ice rink and the music created for so many people, there was a different kind of happiness this season.

“One that gave people a much deeper feeling of Christmas, as though they were in some kind of other place for a moment in such a busy season. A place to take a breath, a place of nostalgia and a place seemingly right out of a Christmas movie immersed in beauty.”

After an emotional thanks given to the Williamses by Winfield, Kyle and Carol Williams came up to award Murphy with a one-of-a-kind token cut from the base of the tree, honoring her role in the holiday event.

The Williamses went on to reflect on the public announcement made 165 days ago, about the plans for The One Tree. Months later, the night of the grand lighting of The Christ Tree was truly electric, Kyle said.

The Spirit of God was there, with the message of Christ’s love from the stage as the music set the stage for the grand lighting that was truly spectacular, he said.

Carol Williams talked about the reach the tree had, not just locally, but nationally and globally.

“We have read stories from literally the entire United States, and even globally,” she said. “We’ve had reports, even from Malaysia, from people that knew about the world’s tallest fresh-cut Christmas tree that was erected in Enid.”

Kyle spoke about the trials the tree went through. The morning after the tree snapped in a high wind, Williams went on to describe the overwhelming peace he felt. He said he consulted with his family, the executive team and Don Rose, who supervised repairs for the tree, to see what could be done.

The One team and the Williamses knew that everyone would want to see the tree repaired, standing tall and shining bright for all to see.

“We firmly believed that God used that event for many reasons,” Carol said. “It drew more people to the tree and gave us the coverage that we needed to remind us that we are all broken and only through His grace can we be healed and put back together, not only holy, but better than before.”

There will be a tree next year. This was only the beginning, and with the continued support of the community, the event can be even better next year, Kyle said.

“The whole world is waking up to Enid, Oklahoma,” Kyle said. “Next year, when we tell them that we have the world’s tallest fresh-cut Christmas tree, they’ll remember we had it last year as well.”

A Memorial Service for James "Jim" Arwood will be 4:00 p.m. Friday, January 21, 2022, at the Ladusau-Evans Funeral Home Chapel, with Rev. Jim Edmison officiating. Condolences may be made at www.ladusauevans.com.

Raymond Henry Good (Fuzzy) of Hayward, Oklahoma, passed away on January 16, 2022. A memorial service will be held at Driftwood Fellowship Church on Saturday, January 22, at 12:00 p.m. Per his wishes, his body was cremated.