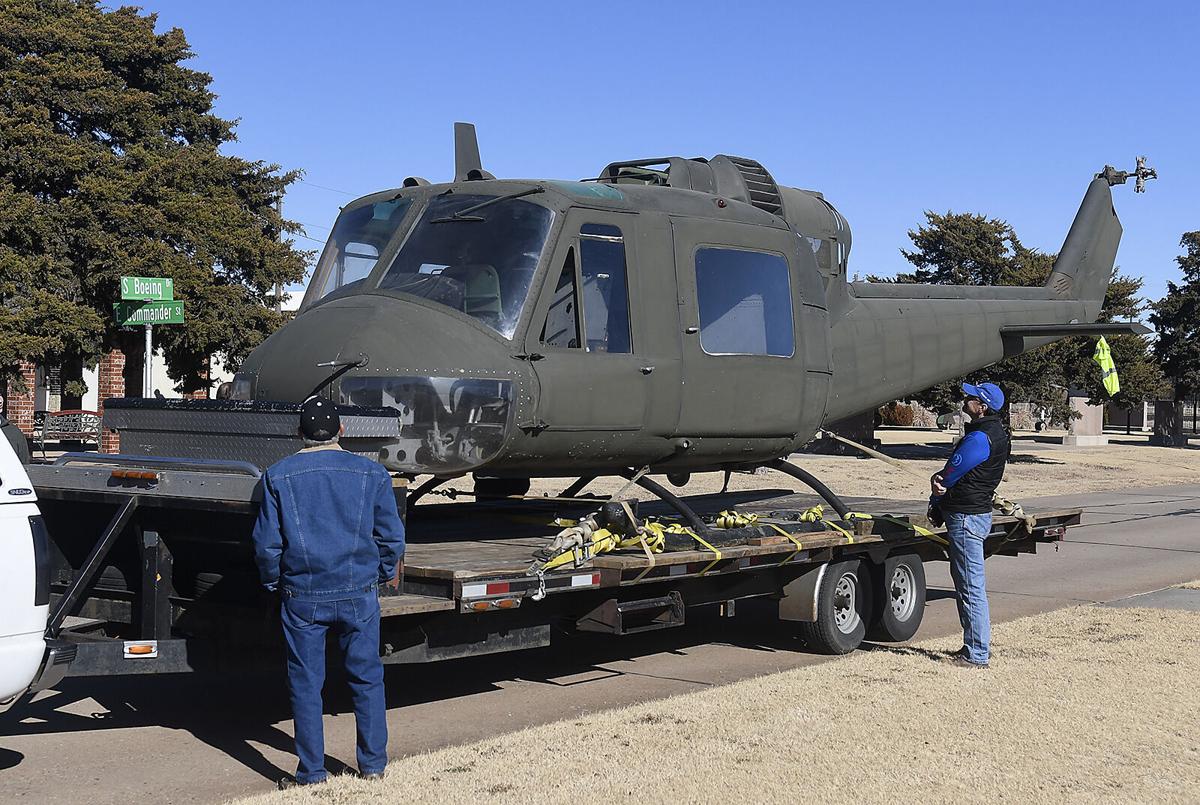 Men look over a Huey helicopter after it was hauled to Woodring Wall of Honor and Veterans Park on Monday, Jan. 10, 2022. The helicopter will become a permanent display at the park. (Billy Hefton / Enid News & Eagle) 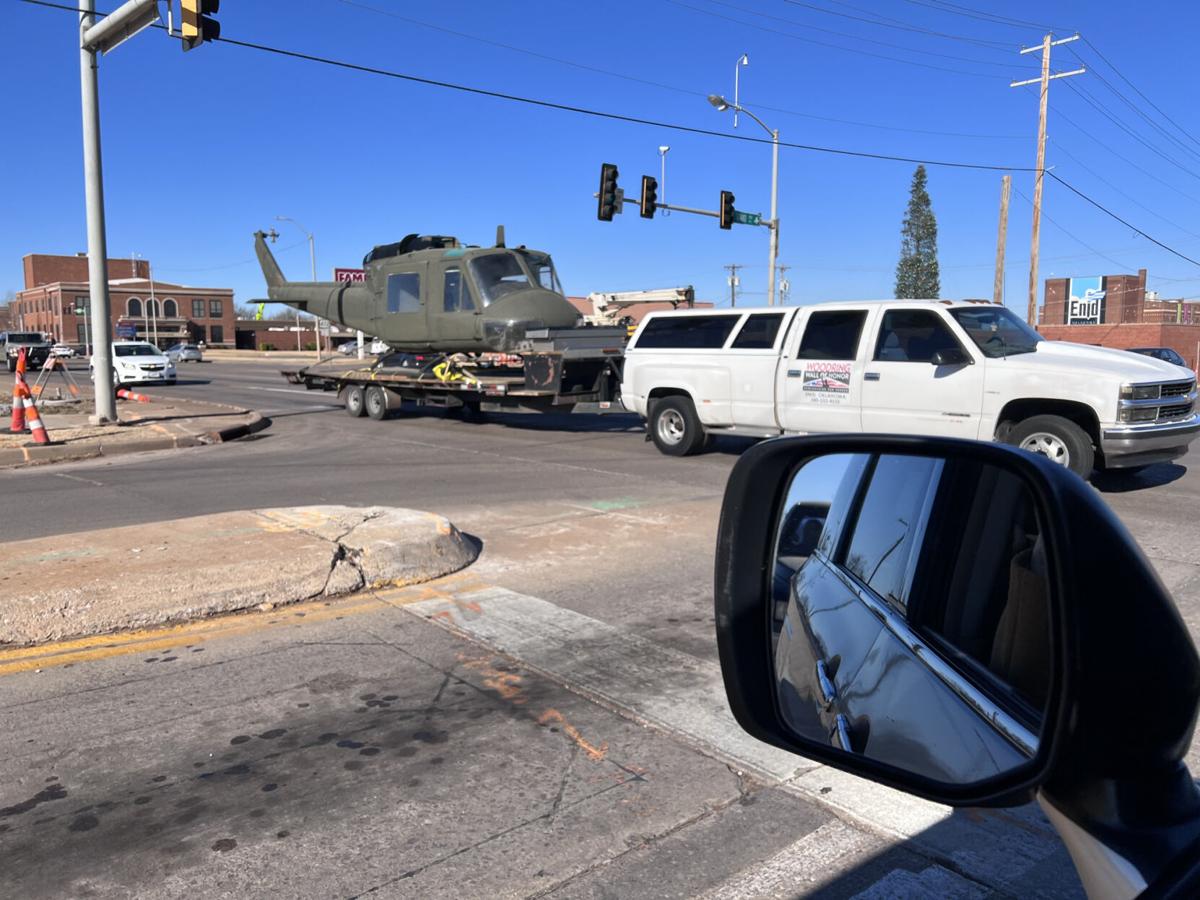 A Huey helicopter arrives in Enid from Texas. The helicopter will be added to the displays at Woodring Wall of Honor and M.L. Becker Educational Center at Enid Woodring Regional Airport. 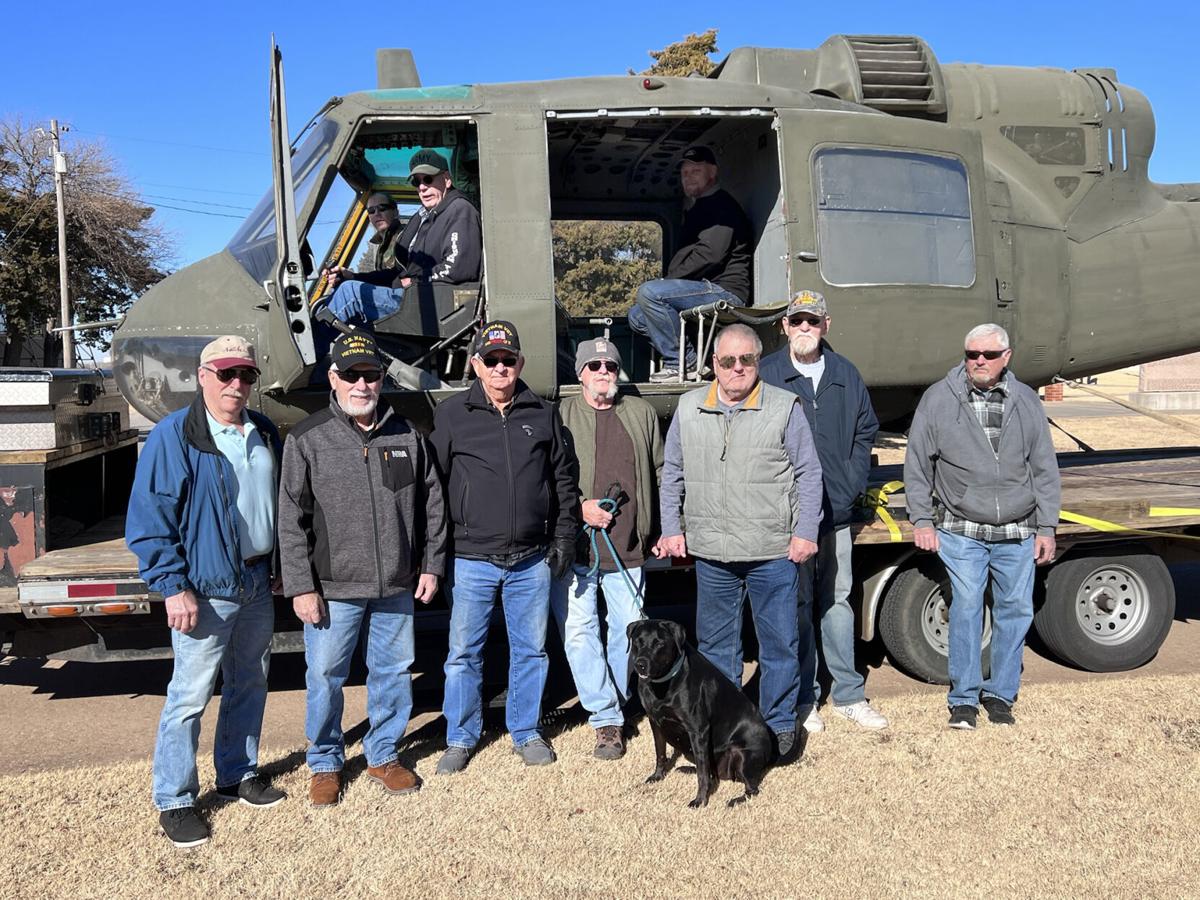 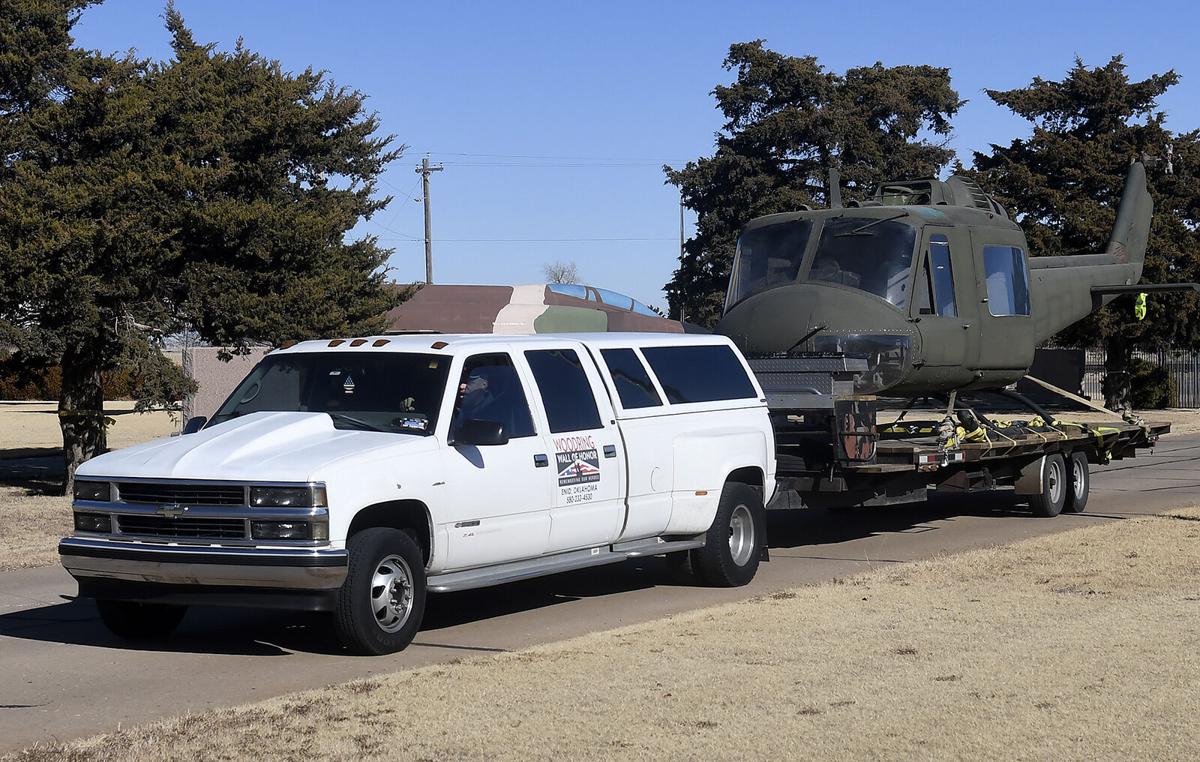 A Huey helicopter is hauled into Woodring Wall of Honor and Veterans Park on Monday, Jan. 10, 2022. The helicopter will become a permanent display at the park. (Billy Hefton / Enid News & Eagle)

The Huey helicopter came from the now closed Cold War Museum in Lancaster, Texas, and will be on display as part of the M.L. Becker Educational Center and Woodring Wall of Honor exhibits.

“We are privileged to have this as a permanent part of our park,” said Elaine Johns, Wall of Honor executive director. “We can’t wait for the rest of 2022, that we can’t talk about right now, but there is more coming.”

The helicopter is temporarily missing its blades and transmission. Accompanying the incoming war bird is a World War II jeep that will be displayed in the museum.

Admiring fans and veterans met the helicopter at Hutch’s Oil and Convenience Store on South Van Buren as it arrived in Enid. The Huey was transported on a trailer by museum volunteer Justin Messenger from Lancaster, Texas.

The Huey was escorted to Woodring by Enid Police Department, followed by dozens of vehicles in the procession.

“The team worked 22 hours getting there and breaking the Huey down for transport and working their way through Dallas,” Johns said. “It was a slow process as there were several wrecks and lots of ‘lookieloos’ while driving by the Huey.”

The past and future of Woodring’s Huey

The helicopter left Lancaster at 11 p.m. and arrived in Oklahoma City at 4 a.m., leaving there at 9 a.m. to arrive in Enid around 11 a.m., Messenger said.

“We navigated an insane amount of traffic, but especially because people were looking at the helicopter,” Messenger said. “This helicopter is an actual Vietnam veteran. It got damaged so badly that they had to rebuild it in the United States after the war.”

A mine on a landing pad is what ultimately took this helicopter out of commission, Johns said. Formerly, it was used as transportation before the bomb when off and damaged its underbelly, Johns said.

The Huey will be housed with the A-26 Lady Liberty for now, but there isn’t enough room in the hangar to display the helicopter properly.

“Now we have to start a new campaign to get a new building,” Johns said. “We already have an account open at Security National Bank. We will be accepting new donations because we are going to have to build a large building that is going to be able to house what we think we are going to be getting this year. That’s 10,000 square feet of memorabilia that could be added to the park this year.”

The fully assembled helicopter will be unveiled at Woodring’s Memorial Day celebration.

The Woodring board previously had gone to look at a different Huey helicopter, belonging to the U.S. Army in Kansas, but were unable to get it.

“Justin, one of our volunteers, has a Cobra. He and his brother own it,” Johns said. “There was a man in Texas that said, ‘If you ever find this part for a Cobra, I’ll trade a Huey for it.’ Justin told me three weeks ago and said that he had found that Cobra part on eBay for $15,000. We knew we could raise $15,000 to get that Huey. So we did. We are so honored to have it now.”

Several Vietnam veterans gathered at Woodring with the arrival of the Huey. Many of them recounted their memories of the war and their involvement with jeeps and helicopters like the ones new to Woodring.

“I joined in 1991 and served until 1996,” veteran Brent Roberts said. “I went to air assault school at Camp Gruber in 1993. I rappelled three times out of the Huey. They had the Blackhawk there, but I went old school. I remember, on the skids there, they had a special tower you had to train on the Huey. If you had a misstep, you would catch a possum hang. There is a static probe that, if you touch it with your foot, you were in trouble.”

One veteran, Lawrence Payne of the Army’s 101st Airborne Division “The Comancheros,” knew a lot about the Huey, specifying differences between different models and talking about the material make-up of the helicopter.

“I was a crew chief for 14 months in Vietnam on an H model Huey in ’70 and ’71,” Payne said. “B models are early. It’s got a shorter door. The H model has two windows in the sliding door, and it’s got another little quarter door in front of it. It’s got quite a bit bigger cargo compartment, bigger lift engine and rotor blades.”

Veterans talke about relationships with war and Huey helicopters

Huey helicopter to be permanently displayed in Enid