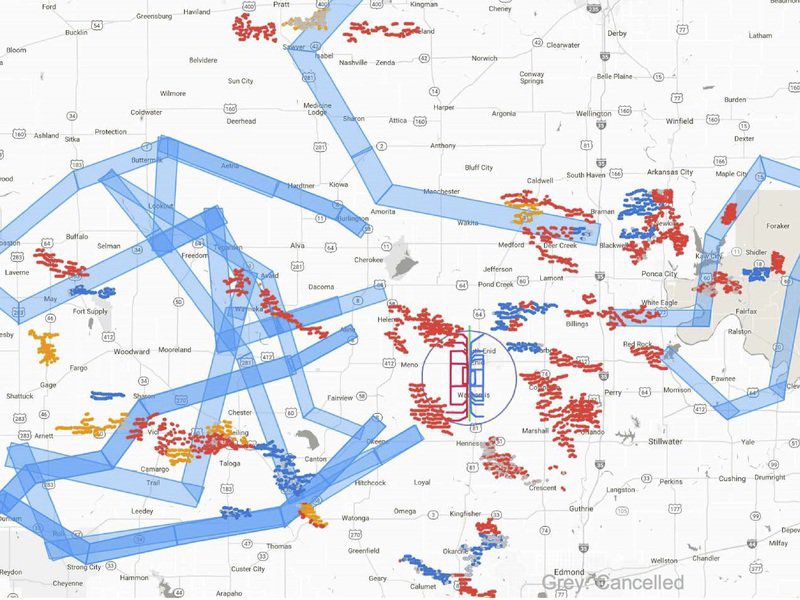 This is a map of low-level military training routes used by instructor pilots and students from Vance Air Force Base, showing wind farm projects that are completed (blue), under construction (yellow-orange), proposed (red) or canceled (gray). (Provided graphic) 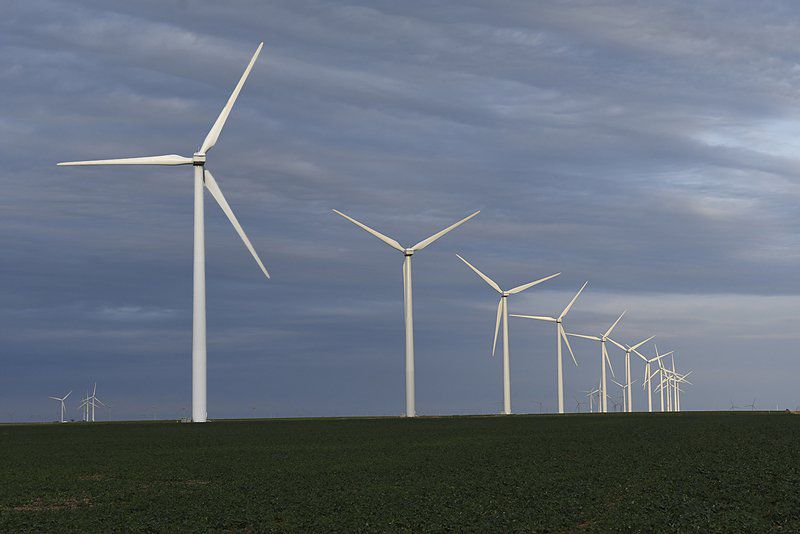 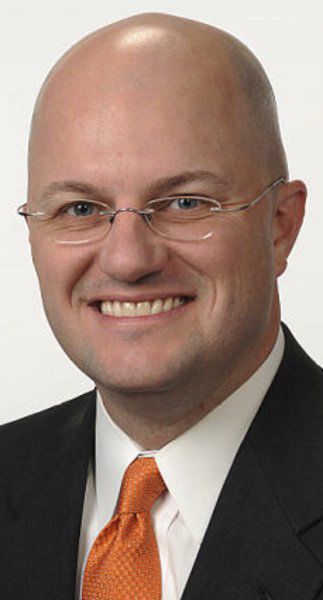 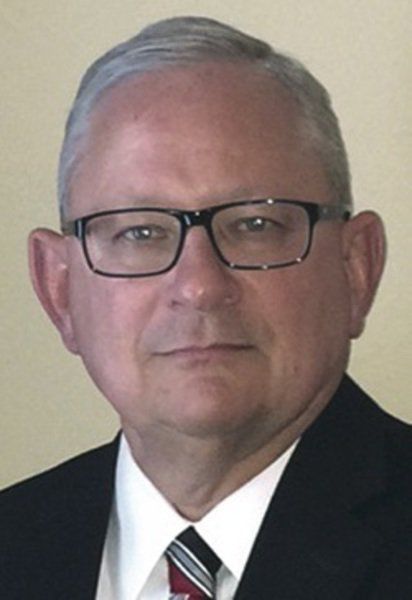 This is a map of low-level military training routes used by instructor pilots and students from Vance Air Force Base, showing wind farm projects that are completed (blue), under construction (yellow-orange), proposed (red) or canceled (gray). (Provided graphic)

ENID, Okla. — Montana is known as Big Sky Country, but the skies over Oklahoma are plenty spacious in their own right.

There are concerns, however, that the state’s recent wind po­­wer boom may compromise that asset.

Oklahoma is third among states in terms of wind capacity and total wind energy generation, providing enough electricity to power the equivalent of 1.8 million average U.S. homes in 2016.

But there is concern the proliferation of wind turbines throughout western Okla­ho­ma may compromise low-level military training routes used by pilots from Vance and Altus Air Force bases, among others.

The placement of some current and proposed wind farms sparked members of the Altus Chamber of Commerce to request the Oklahoma Legislature change the way approval is granted for siting wind energy projects. At present the Department of Defense Siting Clearinghouse decides whether proposed wind projects are compatible with military needs.

Senate Bill 477, authored in the last legislative session by Sen. Joe Newhouse, R-Broken Arrow, and Rep. Charles Ortega, R-Altus, would have required wind farm developers to obtain approval from the Oklahoma Aeronautics Commission before starting construction. That bill passed the House, but stalled in the Senate. It now is the focus of an interim study.

This past session the Texas Legislature debated a bill similar to Oklahoma’s SB 477, but instead passed a measure that will end state tax breaks for wind farms built within 30 nautical miles (about 26 miles) of military bases. That isn’t an option for Oklahoma, which saw Gov. Mary Fallin sign a bill earlier this year ending Oklahoma’s last wind energy tax incentive.

In Oklahoma, the issue primarily involves the placement of wind farms on or near low-altitude training routes. Vance has a number of low-level routes, which range from four to six miles wide and through which pilots fly at 500 feet above ground level, “Simulating conditions that future pilots may experience in their next air frames,” said Capt. Josh Welch, 71st Operations Support Squadron flight commander. Vance pilots fly low-level routes in all three of the base’s aircraft, the T-6, T-38 and T-1. Other Air Force units likewise use Vance’s low-level routes, said Josh Beagley, Vance’s chief of airspace management.

Earlier this year military leaders sat down with wind industry representatives to discuss the issue of wind turbines encroaching on low-level routes and who should have siting authority.

“We sat everybody down in a room with their wind expert and discussed what the most minimum thing we could do to ensure mission capability doesn’t erode,” Cooper said. “We clearly defined what those areas were and how to understand what that was, how to implement that. We all agreed.”

If a wind farm is built on a low-level training route, said Beagley, pilots are required to climb to 500 feet above windmills, which themselves are more than 300 feet tall, or fly around them laterally by 2,000 feet.

“That’s if it can be seen,” said Welch. “If we can’t see it and it’s on the chart, we have to climb up to 500 feet above within two miles of a windmill. We have to give ourselves that safety buffer.”

Besides the siting issue, there is a disagreement of how much impact current wind farms are having on military training. Beagley said “We fly over or around a few windmills.” Welch said T-38 and T-1 pilots must fly over and around wind farms, but not those training in the T-6.

“It impedes our ability to conduct low-altitude training, prepping these pilots for real-world scenarios,” said Beagley.

That jibes with a statement issued by the Vance Public Affairs office in the form of a letter to the editor, which said “At this time there are several turbine developments located within low-level military training routes where Vance AFB student pilots train.” The letter further states that while some developers agreed with Vance’s request to move individual turbines out of low-level routes, “Several developers have declined our request to move or terminate projects when requested and have placed wind turbines within low-level training corridors.”

“Today there is no encroachment by wind turbines on low-level military training routes in Northwest Oklahoma,” said Kisling. “Every turbine erected has been vetted through Vance. Our office tries to be proactive to make sure there is no conflict.”

“If we had a bad actor in the area of wind development who knew about a military training route and decided to build there anyway, we don’t have a way as a state to stop them,” he said.

Cooper, in turn, points to the annual economic impact of Vance on Enid, estimated at $303 million in Fiscal Year 2016.

“Enid is uniquely positioned in Oklahoma and the entire region in that we are financially impacted by both (wind and military aviation), said Kisling. “It behooves us to make sure both continue to grow.”

With approval of a new Base Realignment and Closure round still up in the air as Congress works through the FY 2018 defense authorization bill, Cooper fears airspace issues may play a role if a BRAC is approved to take place as early as 2021.

“I think the key message is we are doing the best we can to try to protect our No. 1 military value, airspace,” said Cooper.

The problem, Cooper said, is the DoD’s Siting Clearinghouse is largely ineffective.

“The clearing house has only stopped one development,” he said.

The Oklahoma Aeronautics Commission agrees, saying in a news release that “DoD requires that a proposed structure must impact national security before it can officially object to such construction. Therefore bases such as Altus and Vance cannot object to a structure because their mission to train pilots for deployment to military theaters does not rise to the level of impacting national security according to current DoD interpretation.”

“Unfortunately the way ahead with respect to protecting Oklahoma’s military training airspace has been temporarily put on hold,” said Victor Bird, OAC director. “The wind energy industry rallied and, frankly, was just simply able to outman us at the Capitol.”

That is at odds with the American Wind Energy Association, which contends “To AWEA’s knowledge, no project opposed by DoD has ever been built. And no missions or training at bases have been compromised due to the tens of thousands of turbines deployed today. Our nation’s security has been unaffected.”

Cooper said he and others are working at the federal level to “put teeth” into the DOD Siting Clearinghouse. At the state level, Cooper said, efforts are ongoing to “come up with agreeable language” for HB 477 that both sides can support.

‘“We all have to be on the same page,” Cooper said. “On the airspace issue we are trying to resolve this issue as well as potential problems.”

Oklahoma ranks as one of the top leaders in the nation in wind energy, according to new U.S. Department of Energy reports.

We were glad to see Oklahoma lawmakers discussing a topic of vital importance to Enid and Vance Air Force Base.